Dustin Keller injury: What Miami Dolphins player will step up?

The Miami Dolphins lost tight end Dustin Keller to a season ending knee injury on Saturday. While the Dolphins will likely consider free agent and trade bait tight ends to replace Keller, someone on Miami's roster will have to step up. But, who will it be?

Share All sharing options for: Dustin Keller injury: What Miami Dolphins player will step up?

Next man up. It's the cliche we hear all the time in sports. A player gets hurt, and the next man is expected to step up as a replacement. For the Miami Dolphins, who lost tight end Dustin Keller to a season ending knee injury over the weekend, the next man up rhetoric has officially begun.

"This is football," Dolphins wide receiver Mike Wallace said after the game. "He's a great guy, great player, but things happen all the time. Next man up. We've got to keep it going, keep fighting for him, keep pushing. We've just got to keep playing."

But, in a Dolphins roster where Keller was clearly the top tight end, who is the next man? Who is going to step up for the Dolphins? 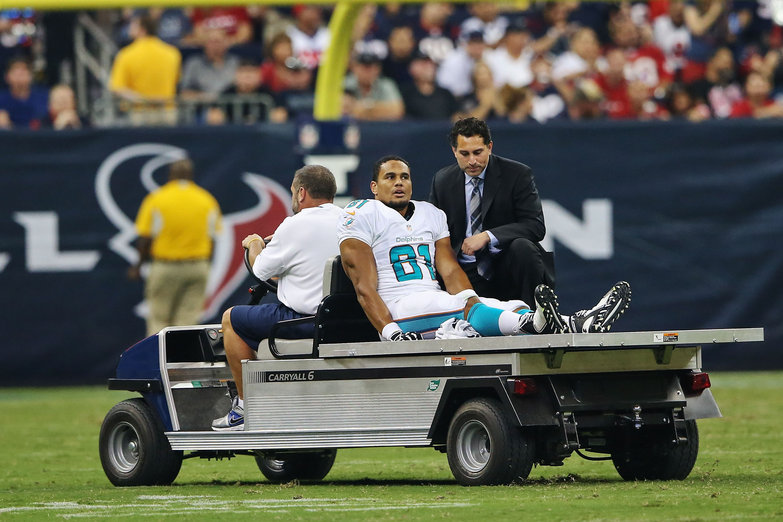 Miami Dolphins tight end Dustin Keller was carted off the field last night with a horrible looking knee injury. Now, we know how horrible it was.

H-back Charles Clay is the second player on the depth chart right now, and is the most likely to get the first chance as Keller's replacement. Last year, the Dolphins made conscious efforts in some games to get Clay more involved, recognizing the potential he has and his ability with the ball in his hands. However, he has a tendency to disappear at times, and the Dolphins have been using him primarily as a fullback over the past few weeks, so it may take an adjustment for Clay to get back into the tight end role.

Rookie tight end Dion Sims may make the most sense as the guy to fill in for Keller. He's a big bodied player who knows how to block, but also has the athleticism to be a pass catching threat. He's had a good preseason/training camp, and could now be asked to do more. Sims was a fourth round pick for the Dolphins back in April, and he is raw, so there will absolutely be a learning curve, and rookie mistakes, throughout the season for Sims. How big a curve, and how many mistakes, could be the gamble the coaches have to make in the wake of Keller's injury.

An intriguing player could be second year tight end Michael Egnew. He's a player who frustrated fans after a rookie season that saw him inactive for 14 of the team's 16 games, and no receptions in the games in which he did play. Egnew is a big target out on the field, with a clear weakness in his game when it comes to blocking. However, he spent the offseason focused on getting stronger and better in blocking, and it has shown in training camp. He's not an excellent blocker, and probably never will be, but in an offense that was going to use Keller as a primary target for second year quarterback Ryan Tannehill, Egnew could use his pass catching ability to be the answer to the Keller hole.

Kyle Miller could also see his role on the team increase. In college, Miller served primarily as a long snapper, so making the adjustment to NFL tight end is taking its time. He spent the 2012 preseason with the Jacksonville Jaguars and Indianapolis Colts, then started the season on the Colts practice squad before making one appearance. When the Colts waived him after the game, intending to put him back on the practice squad, Miami claimed him, keeping him on the roster as the fourth tight end. This year, he has had a good training camp, but is injured right now, and did not play in the game Saturday. Miller is not going to be the replacement to Keller by himself, but he could be a part of the answer.

The Dolphins could also ask fullbacks Jorvorskie Lane and Evan Rodriguez to step up more in the offense. Lane has served only as a fullback for the Dolphins, but has good hands coming out of the backfield and could become a outlet for Tannehill, a role that Keller was serving. Rodriguez, meanwhile, spent his rookie year last year with the Chicago Bears as a fullback, but was expected to begin adding tight end responsibilities to his repertoire this year before being waived and claimed by Miami. Rodriguez's career mirrors that of Clay, just a year behind Miami's H-back.

Miami has a few big bodied wide receivers on the roster right now, who could be used in the passing game similarly to how the team envisioned using Keller. All of them are young players, like undrafted free agents Keenan Davis and Andrell Smith, who are both 6'3", 215 pounds, while second year receiver Jeff Fuller is 6'4", 223 pounds. While none of them are going to be able to assist in the blocking game, their size could give Tannehill a bigger target on shorter passing routes.

While the Dolphins are already making phone calls to see if there are any available tight ends that would interest them, anyone brought in now would have a steep learning curve to get caught up on the offense. The players already on the roster are going to have to step up and find a way to fill the hole left by Keller's injury. Can any of them do it?