Dannell Ellerbe injury keeps him from practicing on Wednesday

The Miami Dolphins and Buffalo Bills have issued their first official injury report of the week. Here's a look at the entire report, including Miami linebacker Dannell Ellerbe, who sat out the practice with a shoulder injury.

Share All sharing options for: Dannell Ellerbe injury keeps him from practicing on Wednesday

The Miami Dolphins and Buffalo Bills are preparing for an AFC East divisional contest this weekend. Both teams released their first official injury report for the week yesterday, with five players between the two teams not taking part in Wednesday's practice.

For the latest from the Buffalo Bills, check out Buffalo Rumblings.

For the Dolphins, the report starts with linebacker Dannell Ellerbe, who is trying to come back from a shoulder injury suffered in Week 5 against the Baltimore Ravens. Ellerbe was unable to take part in the Wednesday practice, and has been limited at best throughout the early portion of the week. He has repeatedly stated that he will be ready to play on Sunday, but clearly, being unable to practice hampers the likelihood of that happening.

On the other side of the report, the Bills have quarterback E.J. Manuel (knee), running back C.J. Spiller (ankle), safety Jonathan Meeks (ankle), and defensive tackle Kyle Williams (Achilles) all listed as non-participants from Wednesday's workout. Given Manuel was never considered the starter for this week, the biggest name on the list for Buffalo is Spiller. The running back told Miami media in his conference call this week that he was not as explosive as usual last week against the Cincinnati Bengals, and that he is not at 100% yet this week. Spiller still led the team with 55 yards on 10 carries, but his health will be something to watch leading up to the game. 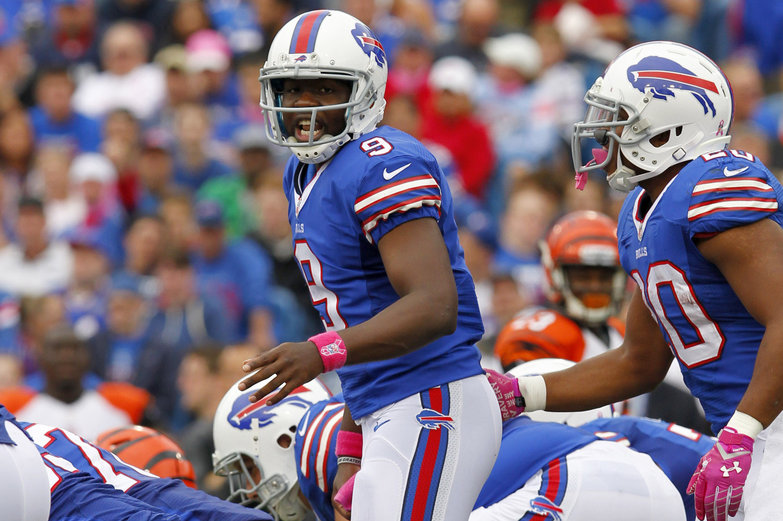 The Miami Dolphins are getting ready to face the Buffalo Bills this weekend, but do not really know who they will face under center from their AFC East rivals. Starter Thad Lewis is now "day-to-day" with a foot sprain.

The Dolphins also had three players under the full participation category, with tackle Nate Garner (knee), defensive end Dion Jordan (ankle), and linebacker Jason Trusnik (rib) all being in that category.

Both teams will issue their second injury report on Thursday. However, Miami will not be practicing, so the report will be a projection of how the coaches feel the players would have worked out.