Dolphins travel fourth most miles in league this year 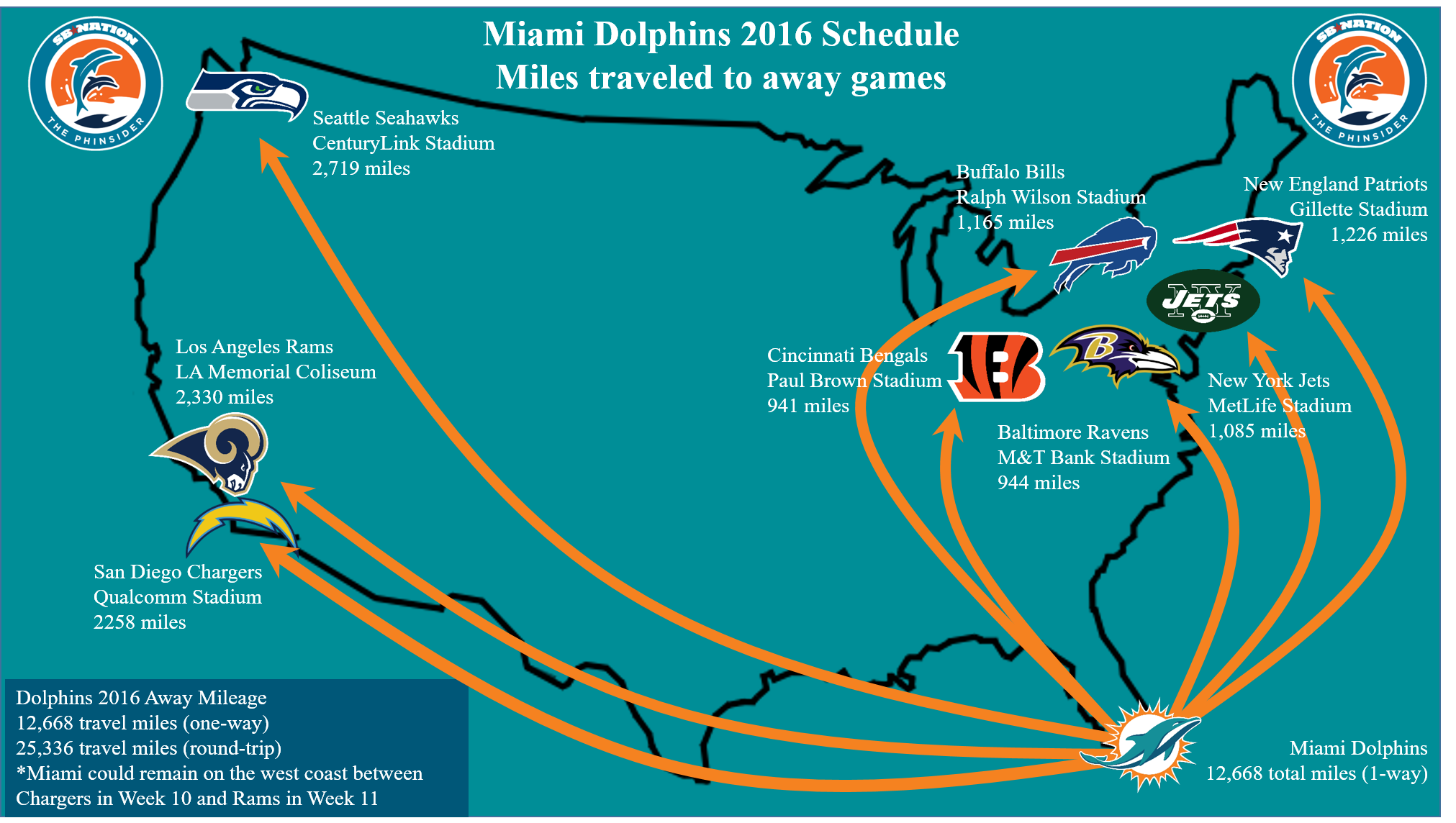 The Miami Dolphins will spend a lot of time on airplanes this year.
By Kevin Nogle@KevinNogle May 30, 2016, 8:00am EDT
/ new

Share All sharing options for: Dolphins travel fourth most miles in league this year

The Miami Dolphins will spend more time on airplanes than most of the rest of the league in 2016, tallying the fourth most miles traveled next season. The Dolphins' away game schedules include three trips to west coast to visit the San Diego Chargers, Los Angeles Rams, and Seattle Seahawks, all of which add at least 2,200 miles to the total distance traveled.

Miami could choose to stay on the west coast between the Chargers and Rams games, which are scheduled for Weeks 10 and 11 respectively, as a way to lessen the travel time.

Miami will travel approximately 25,336 miles this year, with trips to the Cincinnati Bengals, Baltimore Ravens, New York Jets, New England Patriots, and Buffalo Bills in addition so the Seahawks, Rams, and Chargers. According to CBS Sports, that trails just the Rams (37,072 miles), Oakland Raiders (31,580 miles), and Seahawks (27,724 miles).

The Dolphins are an oddity in their division, being over 1,000 miles from any of the other three teams in the Jets (East Rutherford, New Jersey), Bills (Buffalo, New York), and Patriots (Foxboro,Massachusetts). That gives Miami an automatic 3,476 miles of travel every year as part of the division home-and-home series. In comparison, the Pittsburgh Steelers, who will travel the least number of miles this year, are just traveling 5,138 miles - meaning just the three division games for Miami accounts for 68 percent of Pittsburgh entire eight game away schedule.

Miami has three such games this year, the three west coast trip games.

The Dolphins are usually one of the top traveling teams each year, in part because of the distance to the rest of the AFC East division, and in part because home is on the southern tip of Florida.

You can enlarge the graphic at the top of the article by clicking here.