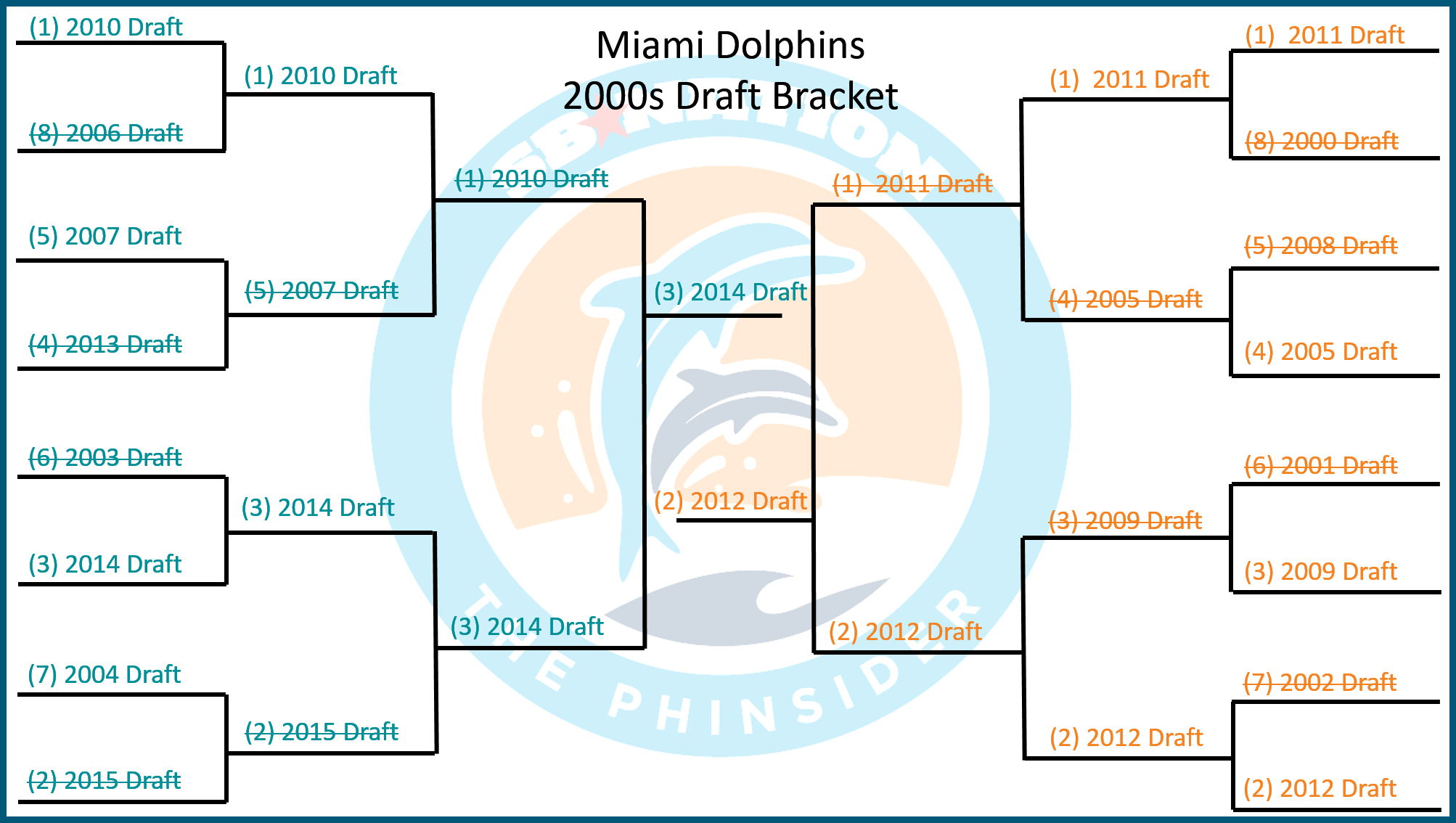 The final round of our Miami Dolphins Draft vs. Draft tournament features a second seed against a third seed.
By Kevin Nogle@KevinNogle Apr 7, 2016, 10:25am EDT
/ new

The Miami Dolphins Draft vs. Draft tournament we have run here on The Phinsider over the last couple of weeks has been a fairly chalk affair. The first round saw just one upset, with the fifth-seeded 2007 Draft beating the fourth-seeded 2013 Draft on the aqua side of the bracket. The second round then again saw just one upset, as the aqua's third-seeded 2014 Draft beat the second-seeded 2015 Draft. Then came the semifinals, with the final four drafts still standing including the top seeds from both sides of the bracket, the orange's second seed, and the aqua's third-seed.

Both top seeds then lost. The aqua bracket saw the third-seeded 2014 continue its run, beating the top-seeded 2010 Draft. The orange had the second-seeded 2012 Draft upset the first-seeded 2011 Draft. That brings us to our final matchup, with the 2012 Draft facing off against the 2014 Draft.  That translates to Ryan Tannehill, Olivier Vernon, Lamar Miller, and Rishard Matthews facing off against Ja'Wuan James, Jarvis Landry, Billy Turner, Matt Hazel, and Terrence Fede.

To decide the winner, all you have to do is vote in the poll below. Here is a recap of both Drafts one final time:

This draft could find its way toward the finals of this tournament, and could be deserving of a higher seed over the next few years. Offensive tackle Ja'Wuan James is the team's starting right tackle and appears to have that spot locked in for the next several years. Jarvis Landry is a ridiculous second-round pick, has already earned a Pro Bowl berth, was named the Dolphins' 2015 MVP, set the team's rookie record for receptions in 2014 (84) and shattered the team's single-season receptions record in 2015 (110); he does everything for the Dolphins from punt and kick return duties to playing every receiving position on the team.