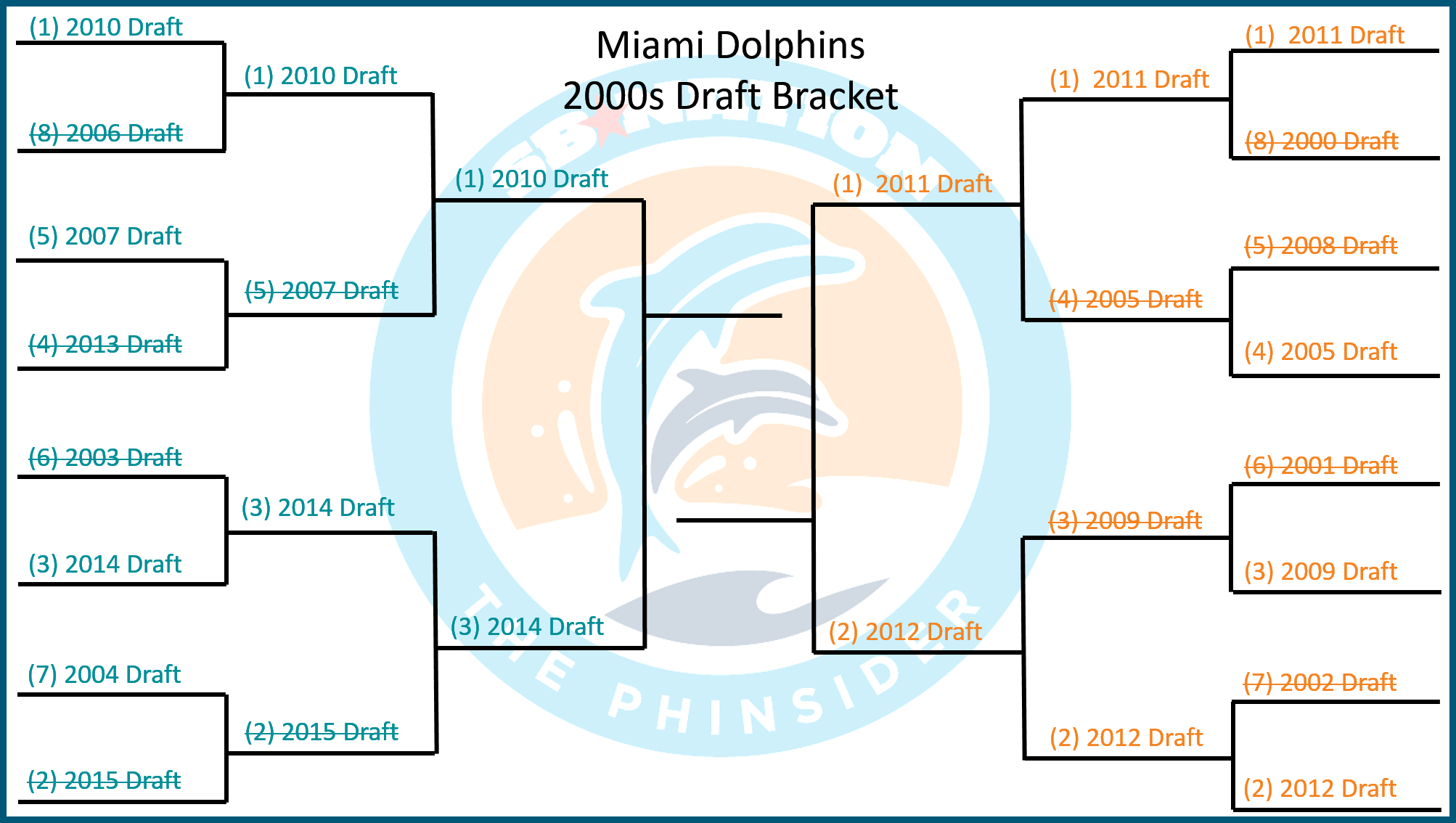 The Miami Dolphins 2000s Draft versus Draft tournament is down to the Final Four, with the top seeds from both sides of the bracket making it into the semifinal round, as well as the second seed from the orange bracket and the third seed from the aqua bracket. This morning, we move on to the second game of the semifinals with the orange's first-seeded 2011 Draft, featuring  Mike Pouncey, Daniel Thomas, Clyde Gates, Charles Clay, Frank Kearse and Jimmy Wilson, facing off against the second-seeded 2012 Draft, with Ryan Tannehill, Johnathan Martin, Olivier Vernon, Michael Egnew, Lamar Miller, Josh Kaddu, B.J. Cunningham, Kheeston Randall and Rishard Matthews.

The 2011 Draft only featured six picks for the Dolphins but landed a multiple Pro Bowl offensive lineman, a starting tight end, and a solid nickel cornerback / safety option for the club. Mike Pouncey headlines the group, having made three Pro Bowls, two at center and one at guard. Daniel Thomas was a disappointment at running back, never turning into the big-bodied, power runner he was expected to be. Clyde Gates was another disappointment, with his speed never turning into a successful NFL career; he spent one season with the Dolphins, recording two receptions, then two seasons with the New York Jets, before ending his career after the 2013 season.

Charles Clay transitioned from a fullback / H-back type into a really good starting tight end; he recorded 161 receptions for 1,809 yards with 14 touchdowns in four seasons with Miami before leaving for the Buffalo Bills on a free agent contract. Kearse showed promise for the Dolphins but was snagged off the practice squad by the Carolina Panthers. Jimmy Wilson played in 60 games over four years with the Dolphins, playing both cornerback and safety; he recorded four interceptions, 16 passes defended, 2 sacks, and 154 tackles in that span before signing as a free agent with the San Diego Chargers in 2015.

The Dolphins received pick 235 (7th round) as a compensatory pick.