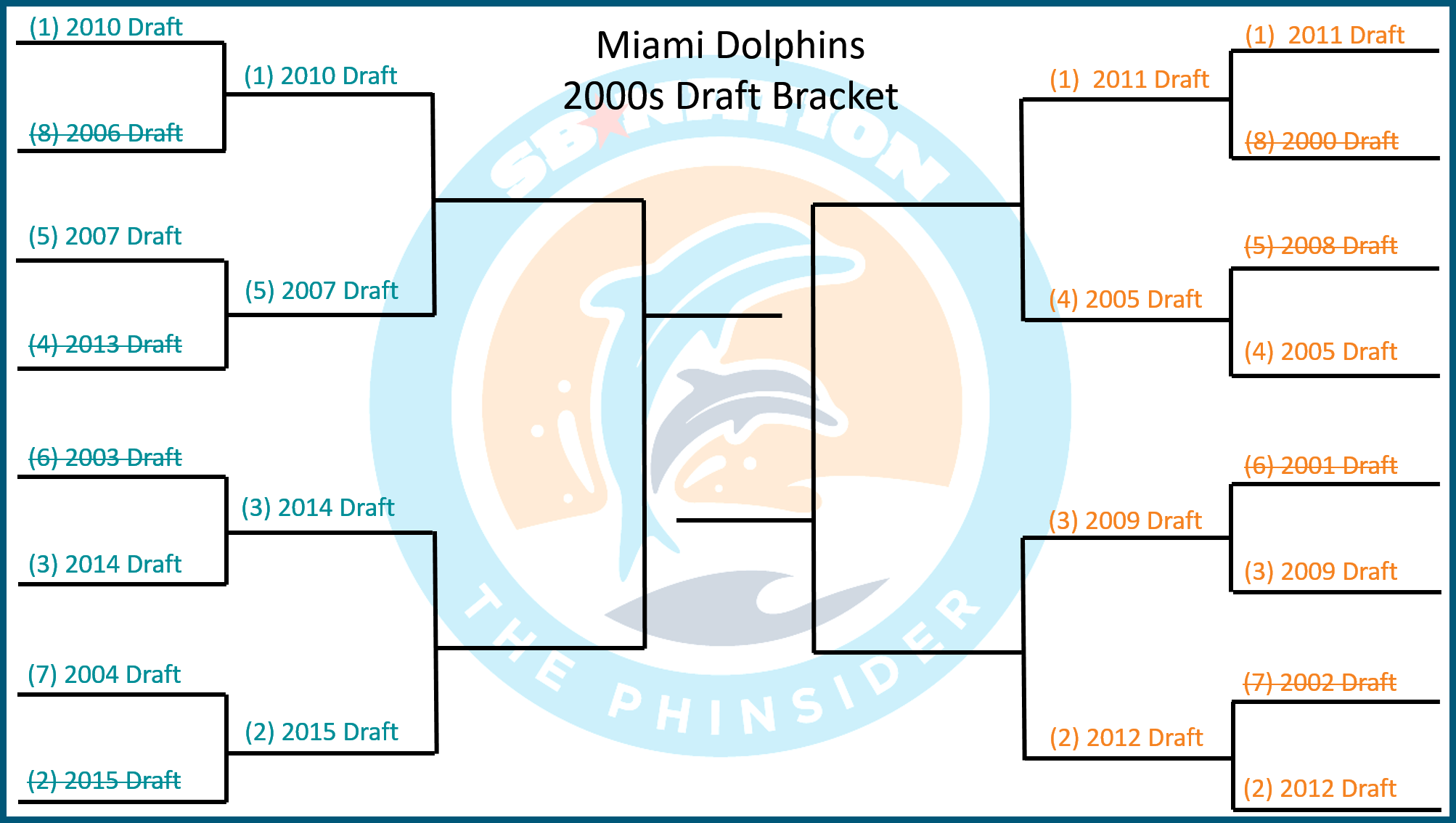 The Miami Dolphins 2000s Draft versus Draft tournament continues with the second round with our eleventh contest.
By Kevin Nogle@KevinNogle Apr 1, 2016, 3:44pm EDT

The Miami Dolphins 2000s Draft versus Draft tournament continues today with the 11th contest in the tournament, the third contest of the second round/Elite Eight level. This game will feature the orange side's second-seeded 2012 Draft facing off against the third-seeded 2009 Draft. That pits the Ryan Tannehill, Olivier Vernon, Lamar Miller, and Rishard Matthews draft against the Vontae Davis, Sean Smith, Brian Hartline, and Chris Clemons draft.

Vote in other 2nd round contests:

The 2009 Draft for the Dolphins found some really talented players and had some absolute busts. Vontae Davis and Sean Smith should have given Miami a pair of dominating cornerbacks for years to come, but both of them fizzled in Miami, only to go on to have better careers with the Indianapolis Colts and Kansas City Chiefs, respectively. In between those two picks was the inexplicable choice by Bill Parcells to grab quarterback Pat White, who may best be remembered as the guy every fan thought had been killed along the sidelines when he tried to run with the ball and Ike Taylor of the Pittsburgh Steelers knocked him out cold.

Patrick Turner should have been a good receiver coming out of USC, but never really did anything in his one season with the Dolphins, or this three years with the New York Jets. Wide receiver Brian Hartline spent six years with the Dolphins, starting 69 games and catching 298 passes for 4,243 yards with 12 touchdowns over that span, including back-to-back 1,000-yard receiving seasons in 2012 and 2013. Safety Chris Clemons spent five years with Miami, starting 48 games and appearing in 72 total, recording 278 tackles with 4 interceptions, 17 passes defended, 2 forced fumbles, 3 fumble recoveries, and 1.5 sacks, picking up a reputation as a solid player who always seemed to be in the right place at the right time, but was not going to make the spectacular play very often.

The Dolphins traded defensive end Jason Taylor to the Washington Redskins for their second-round pick (44th overall) and a 2010 sixth-round pick.

The Dolphins traded Travis Daniel to the Cleveland Browns for their seventh-round pick (214th overall).

The Dolphins traded their seven-round pick (232nd overall) to the Jacksonville Jaguars for Tony McDaniel.

The Dolphins traded quarterback Josh McCown to the Carolina Panthers for their seventh-round pick (237th overall).