The Miami Dolphins are currently projected to be $2.6 million over the 2016 salary cap. This obstacle will prove to be quite the test for Vice President of Football Operations Mike Tannenbaum, alongside his newly appointed General Manager Chris Grier. The two will work together hand in hand, to not only bring in talent, but also determine which players on the current roster are expendable. Furthermore, the Dolphins will have to make some tough business decisions, setting the emotions of their fan base aside. One of the more difficult off-season decisions, will be whether or not the Dolphins decide to part ways with Cameron Wake and his $8.275 million salary.

Cameron Wake joined the Miami Dolphins on January 18, 2009; signing a four year deal worth a potential $4.9 million. In signing Wake, the Dolphins knew they were getting one of the most dominant pass rushers in Canadian football. What the Dolphins did not know, however, was that the same skill set that allowed Wake to feast on opposing quarterbacks in Canada, would also translate to the NFL.

During week four of the 2009 season, Cameron Wake started in his first game against the Buffalo Bills. In his first start in the National Football League, Cameron Wake recorded 2 sacks, 5 tackles and a forced fumble, leading to a 38-10 victory over the Buffalo Bills. After years of hard work, Wake finally arrived in the NFL. Wake would finish the 2009 season with a combined 23 tackles, 5.5 sacks and 1 forced fumble. As impressive as he was his rookie season, the best of Wake was yet to come.

Wake followed his impressive rookie season with an even better year in 2010. Although he was still used as a situational pass rusher, Wake recorded 57 tackles, 14 sacks, and 3 forced fumbles, which was a vast improvement from the year prior. Wake continued to prove to be one of the more physically gifted pass rushers in the NFL; utilizing a rare combination of speed and strength to outwork opposing lineman. After his impressive 2010 season, Cameron Wake earned All-Pro honors. Wake was later selected to participate in the 2011 Pro Bowl, where he would earn the start as outside linebacker. This would be Wake's first of many Pro Bowl appearances.

After manufacturing his best season in the NFL, Cameron Wake took a minor step back in 2011. Wake accumulated 42 tackles and 8.5 sacks, falling short of his extraordinary 2010 season. With Wake approaching the final year of his rookie contract, the Miami Dolphins were set to pay their elite pass rusher handsomely. On May 5, 2012, Wake signed a four-year contract extension worth a reported $49 million, with $20 million guaranteed. This would lock Wake up through the 2016 season.

With the departure of Tony Sparano, the Dolphins introduced Joe Philbin as the team's next head coach. Through the addition of Philbin, Kevin Coyle was hired as the team's defensive coordinator. Coyle would convert the Dolphins into a 4-3 defense. In doing so, Wake would go from OLB to DE, a position he became accustomed to for a majority of his collegiate and CFL career. During the 2012 season, Wake would produce his best statistical season; combining for 53 tackles, 15 sacks and 3 forced fumbles. Wake's best game of his career came in week four against the Arizona Cardinals. Wake recorded 4.5 sacks in a 21-24 overtime loss versus the Cardinals. At the end of the 2012 season,

Wake would once again be invited to the Pro Bowl. However, this time as a defensive end. Wake, alongside Randy Starks, would become the first player in NFL history to make the Pro Bowl at two different positions. In addition, Wake would also receive first team All-Pro honors for his landmark 2012 season.

Wake's 2013 season would look eerily similar to his 2011 season, recording 42 tackles, 8.5 sacks and 1 forced fumble. Despite another disappointing season for the Miami Dolphins, Wake's most memorable moment came against theCincinnati Bengals on Halloween night. The game was shown live on NFL Network's Thursday Night Football, in what proved to be one of the better games of the year. Cincinnati tied the game up late and forced it into overtime. With the Bengals backed deep in their own territory, Cameron Wake took matters into his own hands.

Anatomy of a Play

As soon as the ball is snapped, the right tackle immediately kicked out to occupy Philip Wheeler, allowing Cameron Wake to move inside, where he was now one on one with the right tackle. 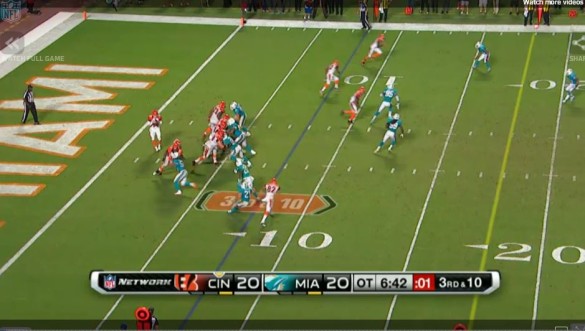 Wake's initial burst off the line was second to none. As he approached the guard, Wake kept his arms tight, eventually allowing him to rip through the offensive guard. 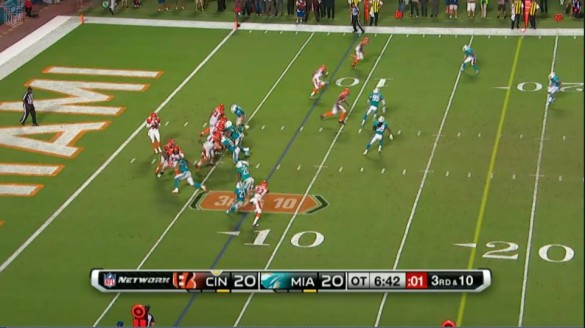 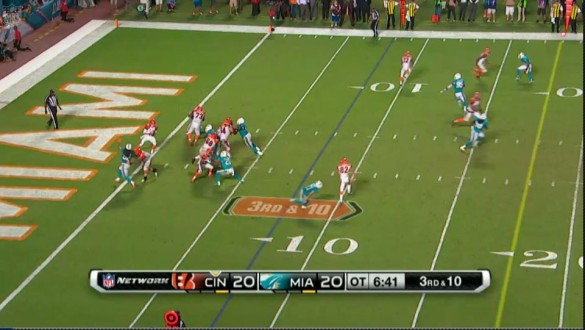 After shedding the defender, Wake had an open lane to quarterback Andy Dalton. At this point, all Andy Dalton can do is pray. 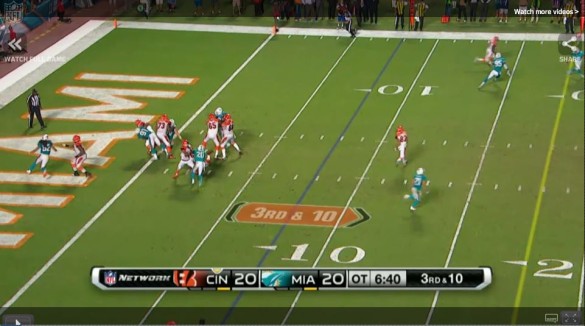 These are the types of plays Dolphin fans have become accustomed to throughout his career.

Arguably the biggest moment of the Dolphins' 2014 season was the team's week 1 win against the New England Patriots. Wake recorded 3 tackles, including 2 sacks and 2 forced fumbles. He single-handedly dominated the Patriots offensive line, resulting in a surprising 33-20 victory to begin the 2014 season. Wake finished the season with a less than stellar 36 tackles, 11 sacks and 3 forced fumbles. Like the season before, Cameron Wake would once again be selected to the Pro Bowl.

Cameron Wake's 2015 season would prove to be the most disappointing of his six-year career. The former Pro Bowl defensive end was troubled by a hamstring injury, which prohibited the pass rusher greatly. During the Dolphins' Week 7 game versus the New England Patriots, Wake suffered a season-ending Achilles injury. He would finish the season with 9 tackles, 7 sacks and 4 forced fumbles.

In the end, Cameron Wake has had an exceptional career. Once, unable to land on the New York Giants as an undrafted free agent, the former CFL superstar made the most of his opportunity in the NFL. Throughout his NFL career, Cameron Wake has recorded 259 tackles and 70 sacks. Furthermore, Cameron Wake has proven to not only be an elite defensive end, but proved to have equal success at outside linebacker.

With free agency approaching and the Dolphins currently above the projected 2016 cap, Miami must decide what to do with Wake sooner, rather than later. If it were up to Miami, they would most likely look to restructure Wake. However, Cameron Wake must do what is best for Cameron Wake. The four-time Pro Bowl defensive end might be unwillingly to restructure, realizing that his career in the NFL is nearing an end. Wake has never played in a post-season game, something that might weigh heavily on Wake's decision. If Wake chooses to test free agency, interest in the veteran defensive end would be at an all-time high.

On the contrary, Miami realizes that Wake is not getting any younger. With a cap hit of $8.275 million and recovering from a torn Achilles, the 34 year old has an up-field battle to regain his previous form. With the possibility of Olivier Vernon leaving for free agency, the Dolphins could decide to cut Wake, using the money to retain Vernon.

Cameron Wake has had an exceptional career in the NFL. He has been everything Dolphin fans could ask for. He has worked hard, he has laid his body on the line and most importantly, he has given everything he has to the franchise. Wake is the epitome of a pro, wherever he ends up, wherever he goes, I will forever be a Cameron Wake fan. You are a hero for many, an inspiration for all; thank you, Cameron Wake.