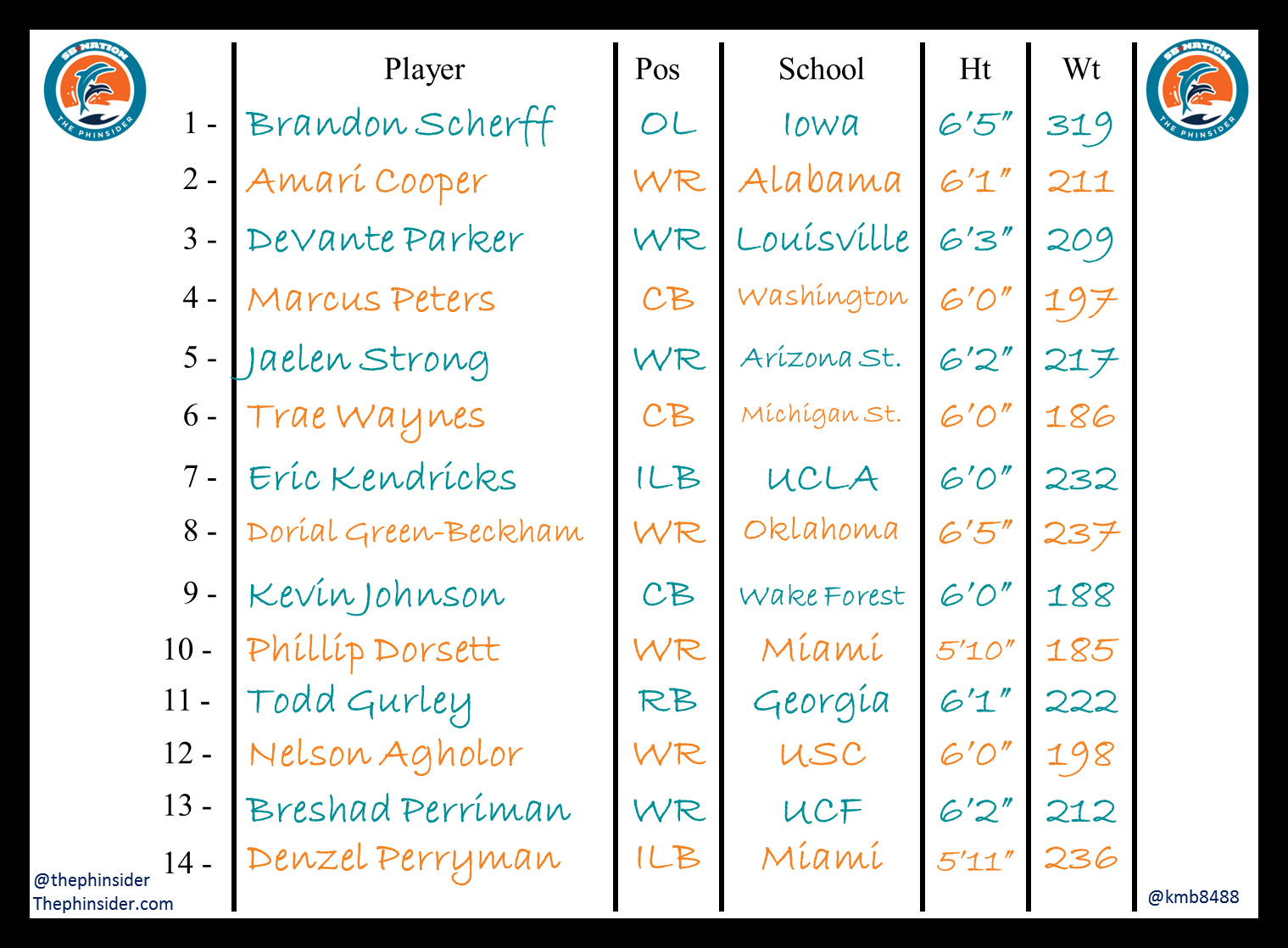 Share All sharing options for: 2015 NFL Draft Dolphins Big Board

We're less than 48 hours from the 2015 NFL Draft, which means we have less than two days to argue about whom the Dolphins will draft with the No. 14 overall selection. We won't lie and suggest we know better than anyone else when it comes to what the Dolphins will do on draft night, but we do have our favorite prospects. Allow us to introduce you to the 14 players we'd most like to see in aqua and orange on draft night (provided they're in attendance, of course).

Ah, you can practically hear the anti-OL crowd bristling at the thought of Brandon Scherff to the Dolphins. Nevertheless, a case can be made (and well-supported) that the guard position is currently the biggest hole on Miami's roster, and Scherff is one of the draft's two-strongest tackle/guard prospects. Scherff's good feet and surprising athleticism make him a qualified candidate for the zone-blocking scheme (ZBS), and he'd also provide the Dolphins' with a contingency plan at left tackle should Branden Albert hit the deck again anytime soon. No, Scherff isn't a pass-catcher, nor can he handle the defensive perimeter, but he could be the final piece to an offensive line that must be locked in if quarterback Ryan Tannehill is going to take the next step toward realizing his potential. That's good enough for No. 1, in my eyes.

Let's get one thing straight regarding Amari Cooper: he isn't the draft's biggest, strongest, most explosive or highest-upside receiver, but he is its best. Cooper can dice the route tree the way Freddy Kreuger diced Johnny Depp in the first A Nightmare on Elm Street film, and he's as polished a receiver as you'll find coming out of the college ranks. Add in the fact that his deep threat ability has been largely overlooked up to this point, and you have a receiver who likely won't escape the top 10.

Whereas Amari Cooper is a supercharged version of a West Coast-style receiver, Parker's game is built on speed, strength off the line of scrimmage and an insane ability to high-point lofty throws. The former Louisville burner has the wheels to qualify as a considerable deep threat at the NFL level, but it's what he does after the catch that will likely get him drafted in the top 15 later this month. There's definitely some Jordy Nelson in Parker's game, although the former was more polished as a route-runner when he left Kansas State in 2008.

High risk, higher reward. Most analysts have come around to the thought that Peters is the best cover corner available this spring. Most of them also agree that his on-field behavior at Washington was anything but exemplary. That's the risk with Peters--will he mature, accept coaching and behave at the NFL level? The reward in this instance is that Peters has the length, feet and fluid athleticism to neutralize assignments. He's a top 10 pick if not for the character concerns. And he's good enough to validate a top-20 spot regardless.

Some might disagree, but we see Strong as this draft's best power-forward prospect. Pairs a massive frame with a ridiculous vertical leap, large catch radius and underrated speed. By no means a burner, but like many long striders, he can do major damage at top gear.

The book on Waynes is a divided one. Some love his build, length and freakish recovery speed; others aren't a fan of the tight hips and grabby-grabby play. If anything, people should be concerned about his lack of physicality despite boasting an impressive build. Nevertheless, he's a top 15 pick, and could go as high as No. 5 to the Washington Redskins.

The best inside linebacker prospect in a decent positional class. Good against the run; exceptional when he drops into coverage. Should grow into a quality leader at the next level. Lack of size a concern, but he plays big and fast on tape. Tough to argue with that.

The ultimate boom-or-bust conversation starter in this year's draft. Big and fast enough to warrant a top 10 grade; enough of a behavior case to join the Vontaze Burfict "great prospects who went undrafted" club. He'll still likely go first round, and could be up for consideration at No. 14 if Miami believes he can help get Ryan Tannehill to the next level. His sub-par ability as a route-runner is a concern, as well.

Waynes and Peters have received top billing in this year's cornerback class, and that has taken a lot of deserved attention away from Johnson. Long, smart and technically inclined, Johnson is good enough to qualify as a top-flight cornerback prospect. In the right system, he could be a shutdown star.

Hard not to be a sucker for a receiver of Dorsett's caliber. He's ugly fast, boasts exceptional hands and can grease the route-tree. Should the Dolphins trade down, this guy automatically comes into consideration. Mike Wallace-level gamebreaking ability, but without the attitude, poor hands and indifferent approach to intermediate routes. Winning.

Probably fair to say Gurley is the prospect most Dolphins fans want to see at No. 14 (a recent poll we conducted confirms as much). ACL surgery and rehab have come a long way in the past 20 years, and if Gurley is truly on his way back to top form, he'd be a massive addition to Miami backfield and overall offensive scheme. An absolute sledgehammer with outstanding speed and vision. Those guys don't grow on trees, you know.

If Gurley is the in-vogue prospect among Dolphins fans, Agholor deserves a footnote as the in-vogue receiver. The hype is real and the attention is valid--he's fast, catches just about everything, and is arguably the best route-runner in this year's positional class. No need to look at Agholor as a consolation prize for any team that misses out on Cooper, White and Parker; he's plenty a good on his own. The thought of Agholor playing in Bill Lazor's offense borders on pornographic.

Perriman's place on this board is really more of a formality than anything else. He's a hot prospect right now, mainly because his pro day 40 time had scouts salivating like Pavlov's dogs. Still, to say he's anywhere near a polished receiver prospect would be simply disingenuous—his route-running is underdeveloped and one-dimensional, and his hands aren't always as good as they should be. So why is Perriman on this list? Because he has the tools—speed, size, YAC ability—to raise hell in an NFL offense, and in the right situation could develop into an absolute monster at the position. That's at least worth the No. 14 spot on a Dolphins prospect board, no?

The other Perryman in this draft (yes, that's an Alpha joke), and what he lacks in height, he more than makes up for in tenacity and pure tackling ability. Perryman's coverage skills are still question, and he's not a force anywhere near the line of scrimmage, but his ability to diagnose and snuff the run is first rate. Should the Dolphins insist on an inside linebacker on day two, Perryman could be their man.