Dolphins 2014 awards: A look back at the season

We take a look back at the 2014 season for the Miami Dolphins, handing out deserving awards.

Share All sharing options for: Dolphins 2014 awards: A look back at the season

The Miami Dolphins' 2014 season may not have ended the way we all would have liked, but that does not mean there were not some great individual performances throughout the year. We take a look back at the season this morning, handing out awards to deserving players and moments from the year.

Our group of experts (read: Phinsider contributors), consisting of  James McKinney, Chris Early, Alex Parish, Brian Naidus, Kdog92, Danny Williams, jamesradio1979, and me,voted for each of these awards. Whomever received the highest number of votes is listed as the winner for each award.

Later today, we will do the same for the NFL.

Dolphins Game of the Year: 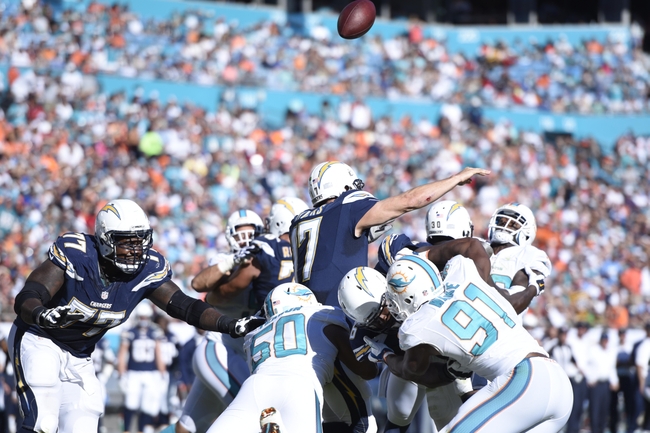 This game picked up five out of eight votes, with the Denver Broncos game and the Week 1 win against the New England Patriots also picking up votes. Personally, I almost voted for the first New York Jets game, where the Dolphins fought through an ugly game and found a way to win, but there was nothing quite as good this year as the beat down Miami handing the Chargers. Ryan Tannehill finished the game with 288 yards on 24-for-34 passing with three touchdowns, giving him a 125.6 passer rating, along with 47 yards rushing on four carries. Charles Clay, Brian Hartline, and Jarvis Landry each had five receptions, with Clay, Landry, and Rishard Matthews each finding the endzone. Tannehill connected with 10 different receivers during the game. Brent Grimes pulled in two interceptions against Philip Rivers, while Reshad Jones added another. Everything Miami did seemed to work, and it continues San Diego's struggles in South Florida, an eight game stretch reaching back to 1982.

The Patriots game saw Miami come out of the gate with a Week 1 upset over the defending, and eventual, division champions. The Dolphins harassed Tom Brady all day, recording four sacks, two from Cameron Wake, while the offensive story was free agent pickup Knowshon Moreno, who gained 134 yards on 24 carries for Miami, capping it off with a fourth quarter touchdown. The Dolphins won the game 33-20.

The Broncos game picked up just one vote, but it was a worthy consideration, even if it was a loss. In Week 12 of the season, Miami went into Denver and went toe-to-toe with the Broncos, coming up short in the fourth quarter when Peyton Manning directed three touchdowns to Miami's one, overtaking the Dolphins for the win. Tannehill three for 228 yards with three touchdowns and a pick, a 104.9 rating, while Manning had 257 yards with four scores, giving him a 135.4 rating. Ultimately, the Miami run defense was the weak point, as the offense tried to keep pace, but the defense allowed 201 yards on the ground.

Dolphins Moment of the Year

The Dolphins would lose this game on another late touchdown allowed, but the single play highlight of the year was cornerback Brent Grimes skying for a pass in the endzone, coming down with a one-handed snag when it looked like a Calvin Johnson touchdown. It was late in the second quarter with the Dolphins trailing 10-0, and it looked like the Lions were about to ice the game just 25 minutes into it. Instead, Grimes coming away with the pick swung the momentum to Miami, who put three points on the board on the subsequent drive, then worked their way to a 13-10 lead in the second half, then a 16-13 lead late before Matthew Stafford would kill Miami with a touchdown pass with just 36 seconds remaining.

Also receiving votes in this category was the highlight from the team's Week 17 loss to the Jets, when Lamar Miller ran for the third longest rush in NFL history, going 97-yards for the score. Miami's defense would again allow a comeback as the Dolphins fell to 8-8 on the year, unable to complete the season sweep on the Jets, but the Miller run was one of the highlights of the year for the league.

Dolphins Comeback Player of the Year

.@millertime_6 started this run in one end zone. He ended it in the OTHER one. 97 yards. WHOOOOOSH. #NYJvsMIA http://t.co/Tj6RhiYRbC

Miller came into the 2013 season with a lot of expectations surrounding him. He was taking over as the starting running back, with the Dolphins believing he would be able to have the success that would justify allowing Reggie Bush to leave in free agency. Miller would never seems comfortable in his first year as the top runner, however, gaining just 709 yards on 177 carries with two touchdowns.

A year later, the Dolphins brought in Knowshon Moreno to serve in a platoon with Miller. While the incumbent continued to start, Moreno picked up the highest number of carries in the first game, and looked like he was going to be the workhorse. That all changed when Moreno missed games due to various injuries, ultimately landing on Injured Reserve. Miller would finish the year with 216 carries for 1,099 yards, his first career 1,000-yard season, a 5.1 yard-per-carry average, and eight rushing touchdowns.  His average per carry was good enough for the second highest mark among runners who reached the 1,000 yard plateau, behind just the 5.4 yard average from Justin Forsett. Miller won the NFL FedEx Ground Player of the Week in Week 17 for a game which included the third longest run in league history, a 97-yard touchdown sprint for Miller.

Also receiving votes was safety Reshad Jones, who struggled much of last year, then was suspended for the first four games of this year. We will discuss Jones' season later.

Only seven votes were received in this category, and they were nearly evenly split. Quarterback Ryan Tannehill won with three votes, while running back Lamar Miller picked up two votes, and linebacker Jelani Jenkins picked up the other two. Any of the three could be the right choice in this case, with Tannehill likely picking up the award because of his role in the most important position on the field. The fact that Tannehill, Miller, and Jenkins are all developing into special players should be a good sign for Miami moving forward.

Dolphins Rookie of the Year

Seven of the eight votes went to wide receiver Jarvis Landry, who joined the group of elite wide receivers to make up the 2014 Draft class, despite being overshadowed by Odell Beckham, Jr., coming out of LSU last year. Landry led the team in receptions with 84, totaling 758 yards with five touchdowns. He also served as the team's punt- and kick-returner, averaging 8.2 yards on punt returns and 28.1 yards on kick returns. From training camp through the end of the season, Landry showed he was sure-handed option for Tannehill at any point in the game.

I was the one dissenting vote in this category, selecting tackle Ja'Wuan James instead of Landry. There is no doubt Landry was worthy, but James, selected in the first round of the 2014 NFL Draft and quickly labeled as a "reach" for the Dolphins, showed exactly why Miami general manager Dennis Hickey selected him. Sliding into a completely rebuilt offensive line as the opening day starter at right tackle, James seemed a natural fit in the line. The usual struggles from a rookie lineman did not seem to materialize, at least to the level expected. Then, when free agent addition Branden Albert was lost for the year, James slid over to left tackle - a position he had never played at any level. He was not perfect this season, but a lot was asked of James, and he always responded. Landry deserves the award, but James deserves some recognition.

Dolphins Offensive Player of the Year

We won't spend any time discussing Tannehill's accomplishment this year here, because we will get another chance in just a moment.

Dolphins Defensive Player of the Year

Jones tallied 80 tackles, with a sack, three interceptions, and a forced fumble in just 12 games played, coming back from his suspension with the stated goal of proving he was still among the best - if not the best - safeties in the league. He looked like the elite safety he appeared to be becoming in the 2012 season, and, if not for his suspension, should have been a consideration for the Pro Bowl.

Also receiving votes for DPOY were cornerback Brent Grimes, who earned his second straight Pro Bowl appearance with a 57 tackle, five interception season, along with 13 passes defensed, and defensive end Cameron Wake, who also is headed to the Pro Bowl with 11.5 sacks on the year, along with 36 tackles, three forced fumbles, one fumble recovery, and three passes defensed.

Ryan Tannehill showed he will be the stability at the quarterback position Miami has not had since Dan Marino retired. He completed 66.4-percent of his passes, the fifth highest mark in the league, for 4,045 yards, the only quarterback in Dolphins history not named Marino to surpass the 4,000 yard mark, with 27 touchdowns to 12 interceptions. He finished the year with a 92.8 passer rating, and was clearly getting better as the year progressed, settling into the new offensive scheme being implement by offensive coordinator Bill Lazor - the first new offense for Tannehill since high school. He was again among the league leaders in times hit/sacked, second only to Andrew Luck, but he has not missed a start in his three-year career, and the Dolphins do not have a question mark at quarterback for the first time in long, long time.