Sit back and relax, this is a long one; a complete preview of the 2014 Miami Dolphins.

Nine painstaking months we have waited to see the Miami Dolphins take the field after a disappointing end to the roller coaster ride of 2013 left a bad taste in the mouths' of many.

Nine months since we were left yearning for more after a two-game collapse, featuring only seven points scored, dropped the once 8-6 Dolphins to 8-8 and out of playoff contention.

And this Sunday, none of that matters.

Over these past few months the Dolphins, who were on the doorstep of the playoffs in 2013, have gotten unquestionably better.

A new general manager in Dennis Hickey, who has handled his duties well in his young career, and a new offensive coordinator, Bill Lazor, whose demeanor, coaching roots, and offensive system, which features creativity in play calling and formations and diversity in player use, excite many about the potential of the Dolphins this season.

While the words promise, potential and playoffs have been thrown around, there are lingering questions with these 2014 Miami Dolphins.

In this season preview, I will:

1. Things to monitor throughout the season:

Offensive line- the Dolphins' offensive line will feature five new starters on opening day, and all but left tackle Branden Albert have question marks hanging over their heads. Even Albert isn't exactly a sure thing as he has only started a full 16-game season once in his career.

Hopefully the right mix of pass blockers and run blockers on the line has been found as balance is extremely important to any offense.

It will be interesting to see how this group holds up until Mike Pouncey returns from his late-June hip surgery and eventually gels together throughout the season.

Ground game - This issue is tied into the offensive line. If the Dolphins' line cannot create lanes for the running backs then this offense will be severely crippled and Bill Lazor will be handcuffed in his play-calling.

Conversely, the Dolphins running backs need to prove that they have the vision to find the proper lanes and create positive gains to keep drives flowing smoothly.

So far, only Knowshon Moreno has shown consistent vision to find lanes and gain yards in what is now a thin running back group which features two undrafted free agents. One of those UDFA's Orleans Darkwa, has displayed good vision, but he has only done it against third string players and is currently the last running back on the depth chart.

The Dolphins cannot afford to allow 58 sacks on Ryan Tannehill again, but if they cannot run the ball then another high sack total will be unavoidable.

The Dolphins starting offense scored only one touchdown in four quarters of preseason football and had to settle for two field goals. Three-and-outs weren't common, but neither drives that ended with points. 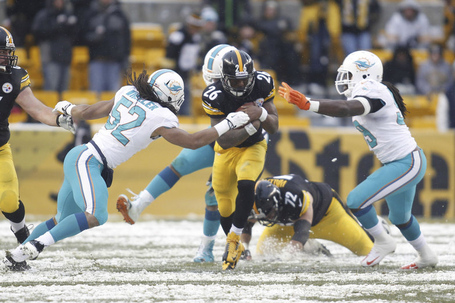 This will be much less of an issue in 2014 than it was in 2013 with the move of Koa Misi to middle linebacker. Misi is the Dolphins' biggest LB and is stout against the run.

The move also allows Dannell Ellerbe to shift from middle to weakside linebacker, which is the position he played with the Baltimore Ravens when he earned the big contract that he didn't live up to last season. This move allows Ellerbe to be able to move more freely, something that will greatly benefit his game.

While the ability of the Dolphins' LBs to stop the run will be monitored all season, I don't expect it to be an issue. The real issue is...

In the first four weeks of the season, Miami will face a scatback every week. This will be a very telling test for the Dolphins linebackers, and I expect them to struggle.

Injuries - Injuries are inevitable, that's why depth is necessary. But an injury to a key player, such as Branden Albert, Mike Wallace or Koa Misi, could derail the Dolphins season.

4. What to expect from the team:

The Dolphins will be running a 4-3 defensive system but they will often use an "under" front, meaning that the linebackers shift towards the strongside of the offensive formation and the strongside linebacker is on the line of scrimmage.

The Dolphins should be able to stop the run effecively, but expect them to have trouble covering the middle of the field against the pass.

The Dolphins offensive system will look very similar to that of the Philadelphia Eagles as Bill Lazor is a Chip Kelly desciple.

Miami will have a zone-blocking scheme when running the ball and will implement many different formations and personnel usage. Lazor's passing game will feature west coast staples and will also get the running backs involved plenty.

Lazor's system features many shifts and motions and gets many guys involved. You can expect to see much more excitement and flare from this offense that is stuffed with playmakers. 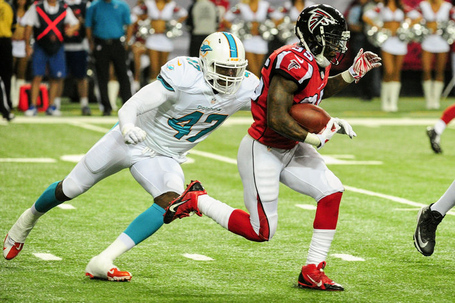 McCain will be featured in the "speed" package on defense due to his pass rushing skills and diversity. McCain has freakish athletic ability and could find himself stealing snaps from Wheeler at the strongside linebacker spot if he thrives in the opportunities he will receive in Dion Jordan's four-game absence.