The Miami Dolphins and Oakland Raiders completed their Week 4 International Series contest with the Dolphins simply dominating throughout the day. Ryan Tannehill led the way with an amazing performance.

The Miami Dolphins destroyed the Oakland Raiders during the two sides' Week 4 International Series contest. In front of some 83,000 fans at London's Wembley, Miami took it to the Raiders, and did not let up until completing wholesale substitutions late in the game.

The game opened with the Dolphins deferring the kick to the second half, only to allow the Raiders to march straight down the field. Gaining large chunks of yardage through the air, then supporting it with hard running from Darren McFadden, Oakland was able to move the ball 74 yards in 10 plays. The drive was capped with a three-yard touchdown pass from rookie quarterback Derek Carr to tight end Brian Leonhardt.

Miami was able to respond on their own opening drive, moving 47 yards on eight plays. They had to settle for a field goal, however, as quarterback Ryan Tannehill hung a ball too high on third-down for receiver Brian Hartline, who made the catch but was carried out of bounds on the play. Caleb Sturgis connected on the 41-yard field goal attempt, bringing the score to 7-3.

Oakland moved the ball 20 yards on the next drive, but was forced to punt after the Dolphins defensive line and linebackers were able to hold up on a short 3rd-and-1 attempt.

The Dolphins got the ball back and started driving the field just before the end of the quarter. Tannehill took to the air before the first 15 minutes were complete, hitting Jarvis Landry for 18 yards, Brian Hartline for 35 yards, Lamar Miller for 1 yard, and Mike Wallace for 16 yards.

They were then able to pick it right back up in the second quarter, with Tannehill finding Landry for 3 yards before connecting on a short pass to Wallace on 2nd-and-7 from the Raiders' 13-yard line. Wallace fought his way through three tackles, carrying Raiders into the endzone for the score and a 10-7 lead. 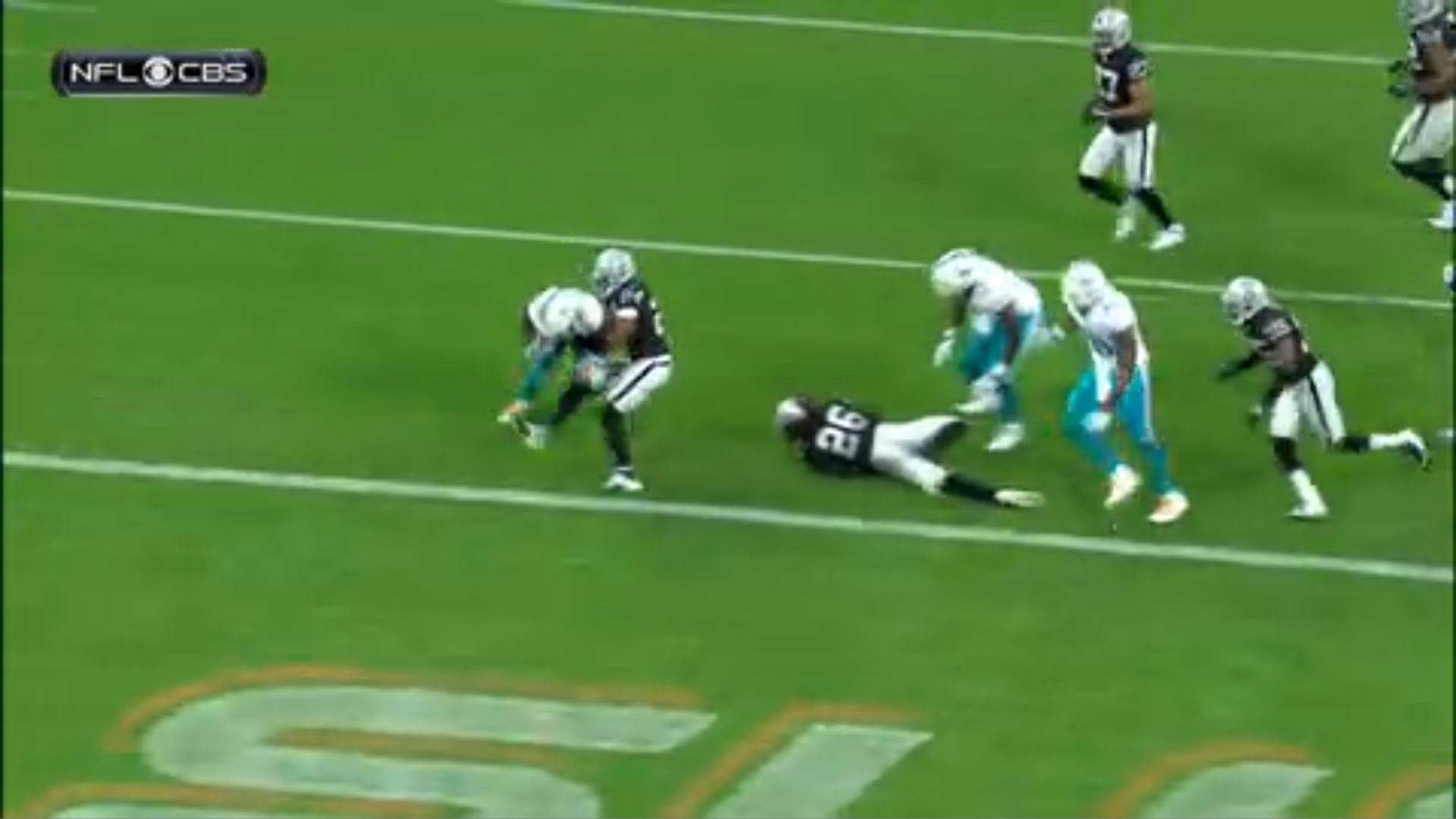 Wide receiver Mike Wallace fought his way through three tackles, carrying Raiders into the endzone for the score.

Miami would hold the Raiders to a three-and-out on negative-two yards on the next possession. 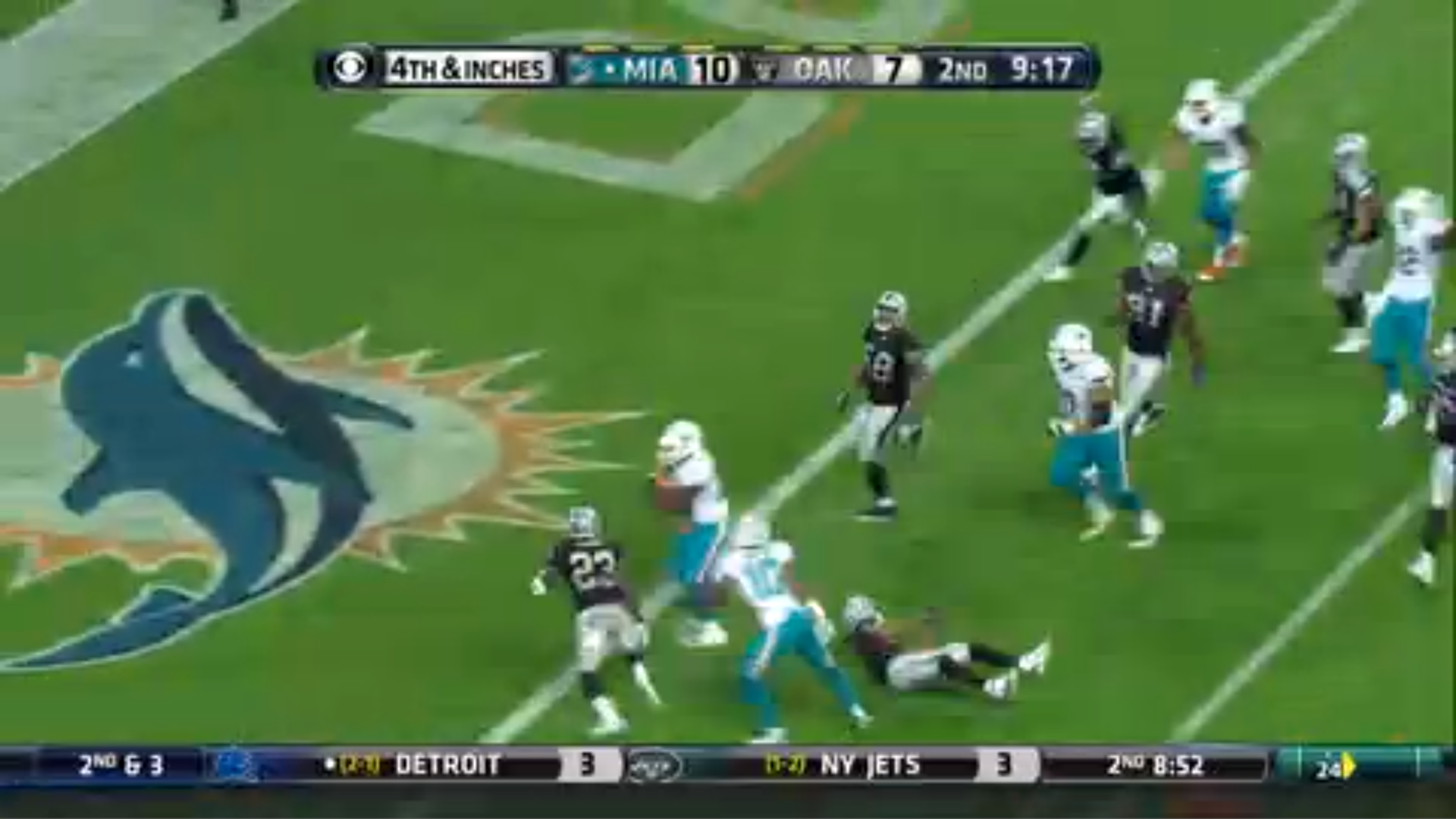 Lamar Miller scores from eight-yards out on a fourth-and-inches play for the Miami Dolphins in the second quarter of their game in London against the Oakland Raiders.

The Dolphins would continue to carry the momentum on the next drive, with Tannehill completing passes to tight end Charles Clay and Hartline, as well as big runs from Daniel Thomas. The team would line up to go for it on 4th-and-inches from the Oakland eight-yard line, pitching the ball to Miller on a sweep. Miller would end up in the endzone, giving Miami a 17-7 lead.

Miami would again hold the Raiders to a three-and-out, only to have Landry fumble the ball during the return, with Oakland recovering. The defense would then hold for the third-straight three-and-out by Oakland, including a 17-yard loss when Jason Trusnik blew through the Raiders' protection on a first-down blitz, forcing an intentional grounding penalty.

Tannehill and the Miami offense once again came out firing, and once again ended up scoring. Tannehill ran the ball, threw the ball, and dissected the Raiders on the drive, gaining 18 yards on the ground and 69 yards through the air. Miller picked up the other three yards on the possession. The drive was capped with an 18-yard pass from Tannehill to tight end Dion Sims for the score and a Miami 24-7 lead. 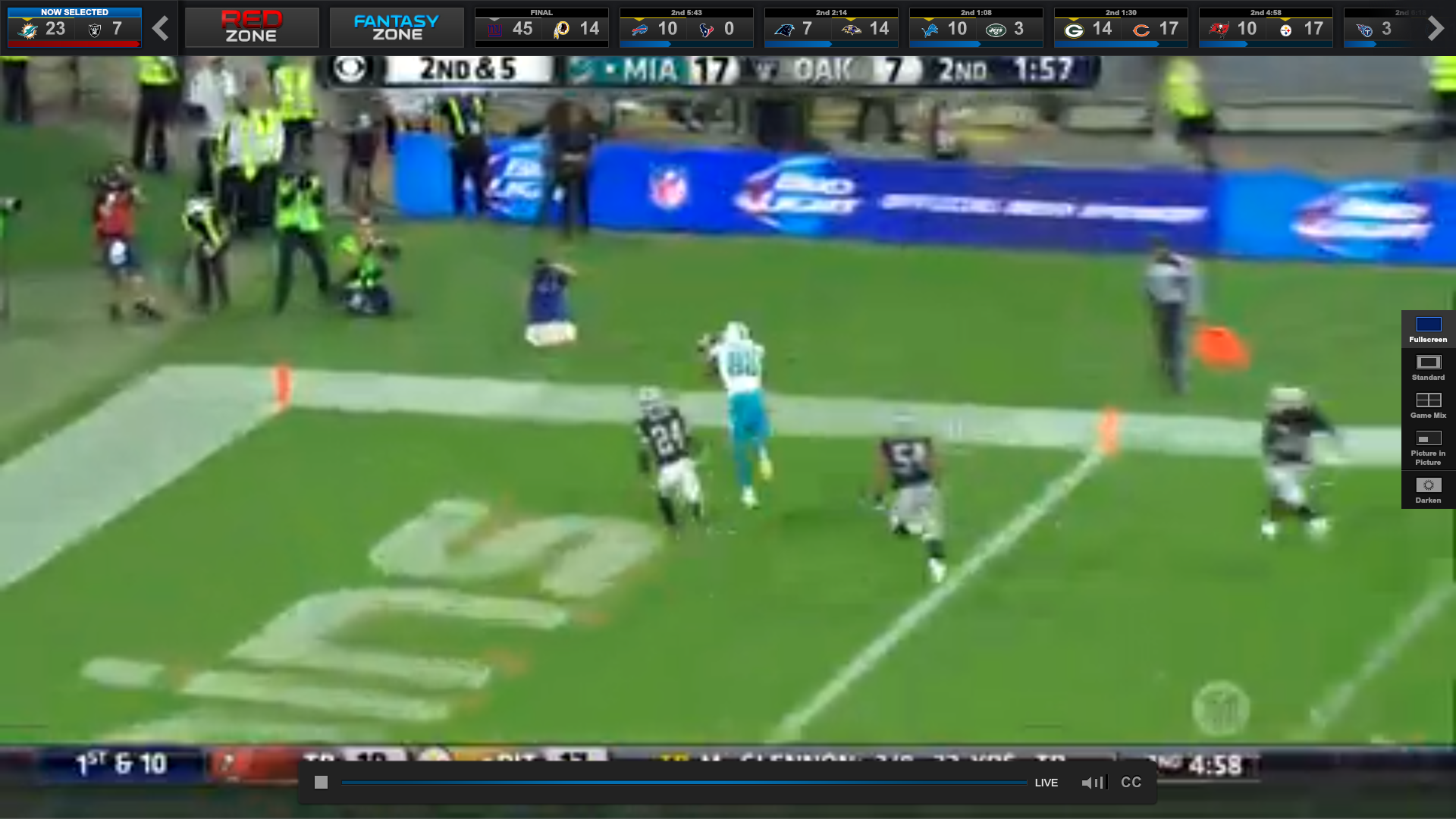 Oakland would end their three-and-out streak with a six play drive on the next possession, but would only gain 16 yards before punting the ball back to Miami. The Dolphins simply kneeled the ball, ending the half.

The half ended with Tannehill having completed his last 14 passes, going 17-for-19 overall for 204 yards and two scores. Miller leads the game with 38 yards rushing on six carries (6.3 yards per attempt), with a score; Thomas added two carries for 25 yards. The team has gained 284 yards of offense, compared to Oakland's 132 through the first 30-minutes of play.

Miami received the second half kickoff, and looked to keep up the momentum. Tannehill's first pass of the drive would be dropped by Gibson, ending his consecutive completion streak, but the Dolphins would take the ball deep into Oakland territory, but fail to score for the first time on the day, not counting the kneel to end the first half. Moving 71 yards on nine, plays, including a streak of three consecutive gains of more than 18 yards, the Dolphins appeared set to extend the lead. On first-and-goal from the two-yard line, Miller fumbled just as he was reaching the goal line, with the Raiders recovering in the endzone. 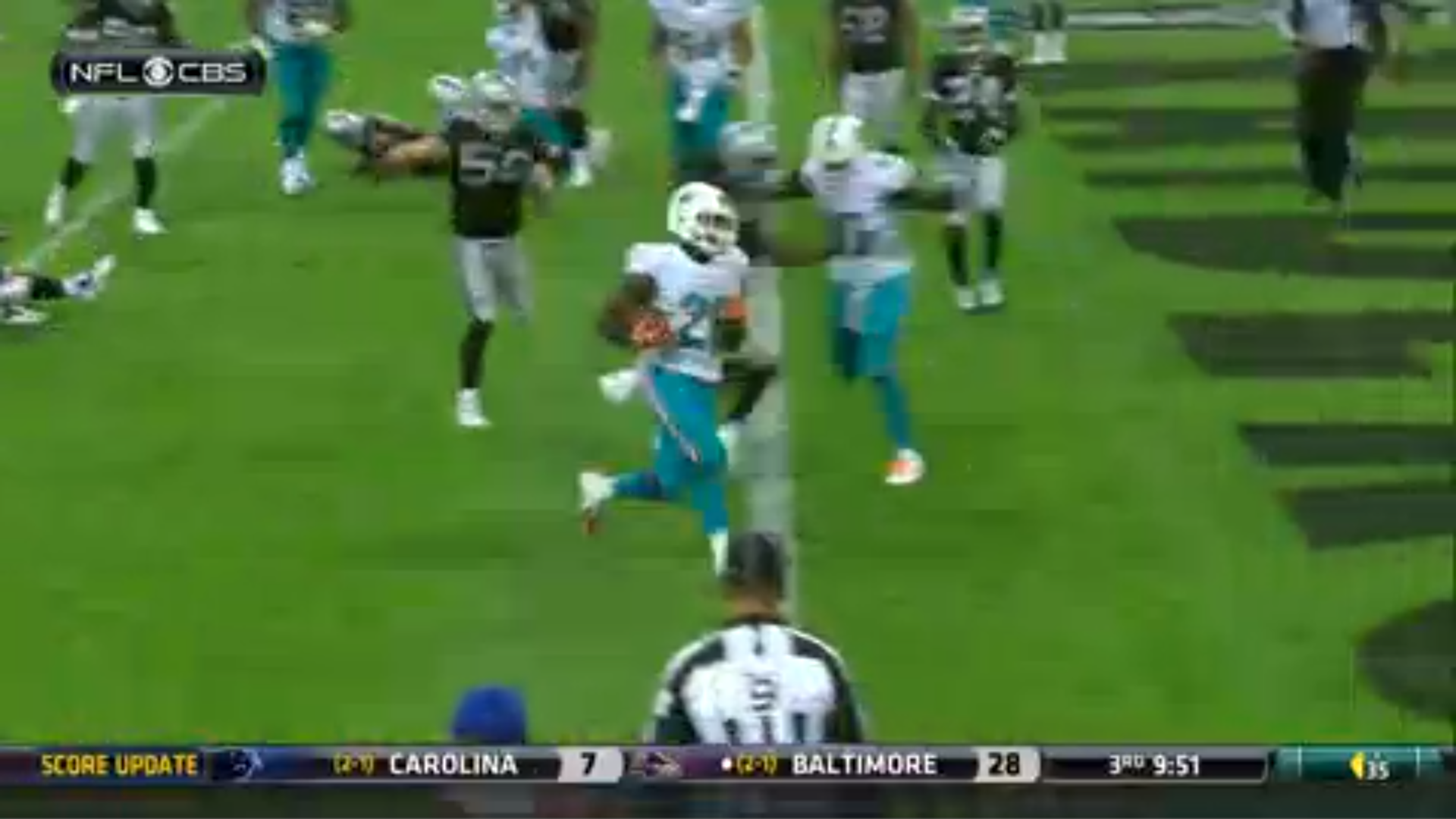 Running back Lamar Miller atones for his goal line fumble a possession earlier with a one-yard sweep for the score.

Oakland would not keep the ball long, however. On 3rd-and-20, Carr was intercepted by Brent Grimes, who returned the ball 32 yards, coming up just three-yards short of a touchdown. The interception was the first of the year for the Miami defense and set up a Miller touchdown, atoning for his fumble the possession before, two plays later on a one-yard sweep. Miami's lead extended to 31-7 with the score.

The Raiders would be able to hold on to the ball longer on their next drive, converting four first downs. They did, however, lose Carr after a run, where he appeared to injure his leg. With backup quarterback Matt Schaub home with his wife after an emergency C-section, Matt McGloin entered the game. Two plays later, a shotgun snap flew past McGloin, was scooped up by Miami cornerback Cortland Finnegan, who returned the ball 50-yards for a touchdown and a 38-7 lead. 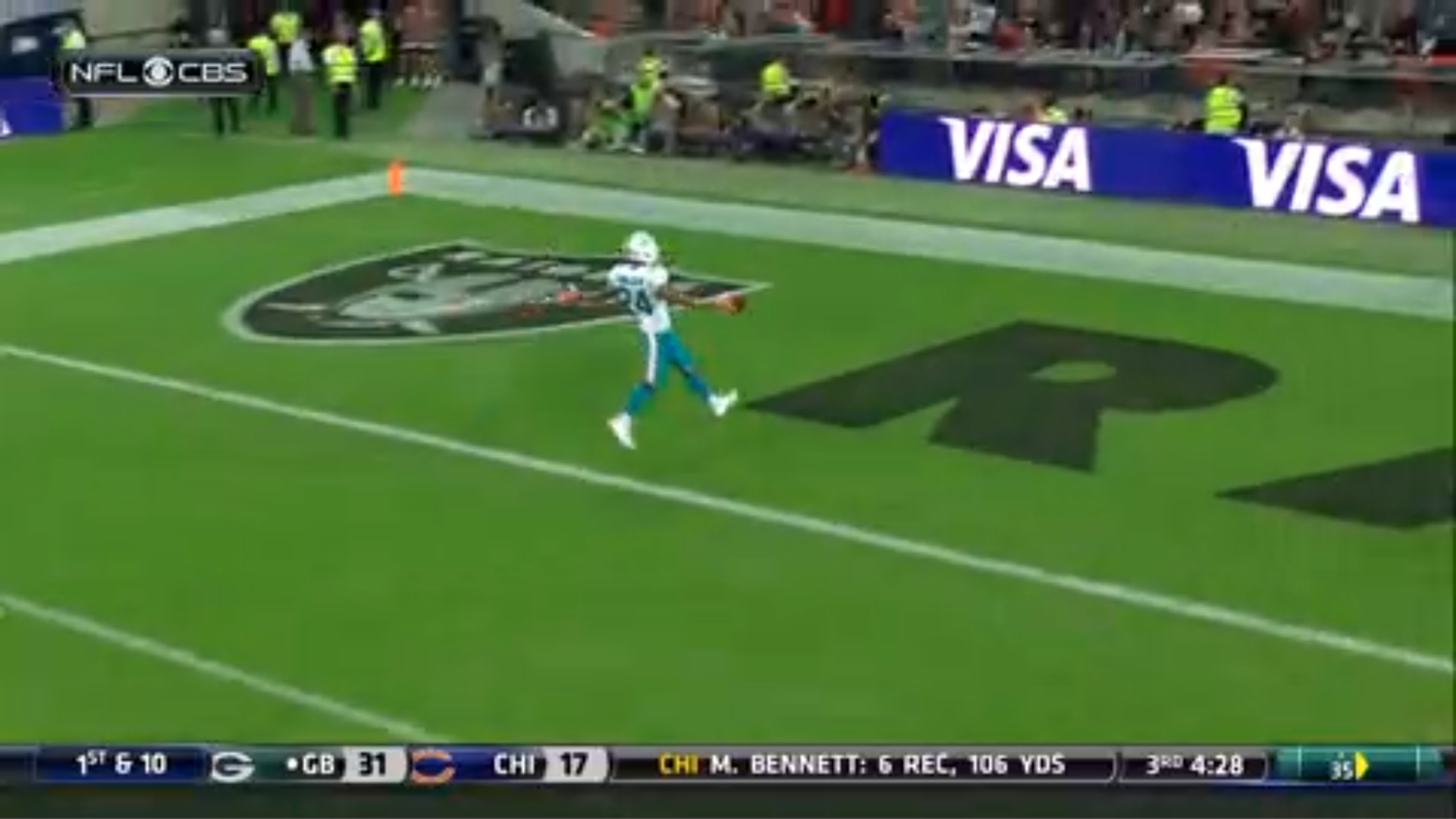 On the third play of the next drive, Gloin would be intercepted by Jimmy Wilson. The Miami ensing drive would end in similar fashion, however, as a ball intended for Sims from Tannehill bounced off the tight end's arm and into TJ Carrie's grasp, giving the Raiders the ball. Miami had appeared to score on a Daniel Thomas run, but it was called back for a holding penalty on Sims.

The Raiders would punt three plays later, and Miami would end the fourth quarter with the ball after a four yard Thomas run. He would add a 25-yard catch-and-run two plays later. The Dolphins would move the ball to midfield before stalling, leading to the first appearance of punter Brandon Fields for the day. His kick would pin the Raiders at their own ten-yard line.

The drive, however, would be marred by injuries for the Dolphins. Left tackle Branden Albert, center Samson Satele, and receiver Jarvis Landry would all need attention by the end of the possession.

Miami began pulling their starters as the defense took the field, and the Raiders would use that to their advantage. Going 90-yards in nine-plays, the Raiders would score for the second time during the contest, this time on a 22-yard pass from McGloin to Andre Holmes, making the score 38-14 Miami.

The Dolphins would see another couple of players injured on the drive, with Jimmy Wilson and Philip Wheeler heading to the sideline.

The offense would come back on the field after the Raiders' score with Matt Moore at quarterback and Nate Garner at center. The drive would be a short one, as Miami moved the ball 18 yards before Fields would be asked to punt for the second time.

After picking up a first down and moving onto the Miami side of the field, McGloin was again picked off, with Walt Aikens claiming his first career interception, returning it 43 yards.

The Dolphins would move the ball from the Oakland 26 yard line down to the Oakland 19, before turning it over on downs when they went for it on 4th-and-3, rather than tacking on three easy points with a field goal in a blowout win. The Raiders would turn the ball back over the the Dolphins at their own 16 yard line, having lost three yards on the drive, when they failed to convert a fourth and six when Derrick Shelby and Terrence Fede combined for a sack.

Miami ended the game with a running play from Damien Williams and two Moore kneels.

Tannehill finished the game 23-for-31 for 278 yards with two touchdowns and an interception. He was not sacked on the day, and finished with a 109.3 passer rating.

Both teams now return to the United States, where they will each have the bye week. Miami will next face the Green Bay Packers on October 12.