A lot has been made lately of the struggles, especially, the decision making of Ryan Tannehill. Let's take a look at the four times the Kansas City Chiefs were able to sack the Miami Dolphins quarterback.

Against the Kansas City Chiefs, the Miami Dolphins allowed four sacks. Over the past few days, a lot has been made of the struggles of Dolphins quarterback Ryan Tannehill this year, including his lack of pocket presence and slow decision making, leaving him to be pulled down by the opposing defense. To see how accurate that perception is, I took a look back at the four times the Chiefs were able to get to Tannehill.

The first sack came on the opening drive of the game for Miami, on a 2nd-and-7 play. Timing the play, from snap to the moment when Tannehill pulled down the ball and tried to escape the pass rush. Taking a look at the play from the broadcast angle, we can see three of Tannehill's receivers, with only Lamar Miller, who is coming out of the backfield, not having a defender directly on him. Watching the play, there is a small window from when Miller gets into the flat and turns to look for the ball and when the Chiefs' pass rush gets to Tannehill - and that pass rush is coming directly between Tannehill and Miller. 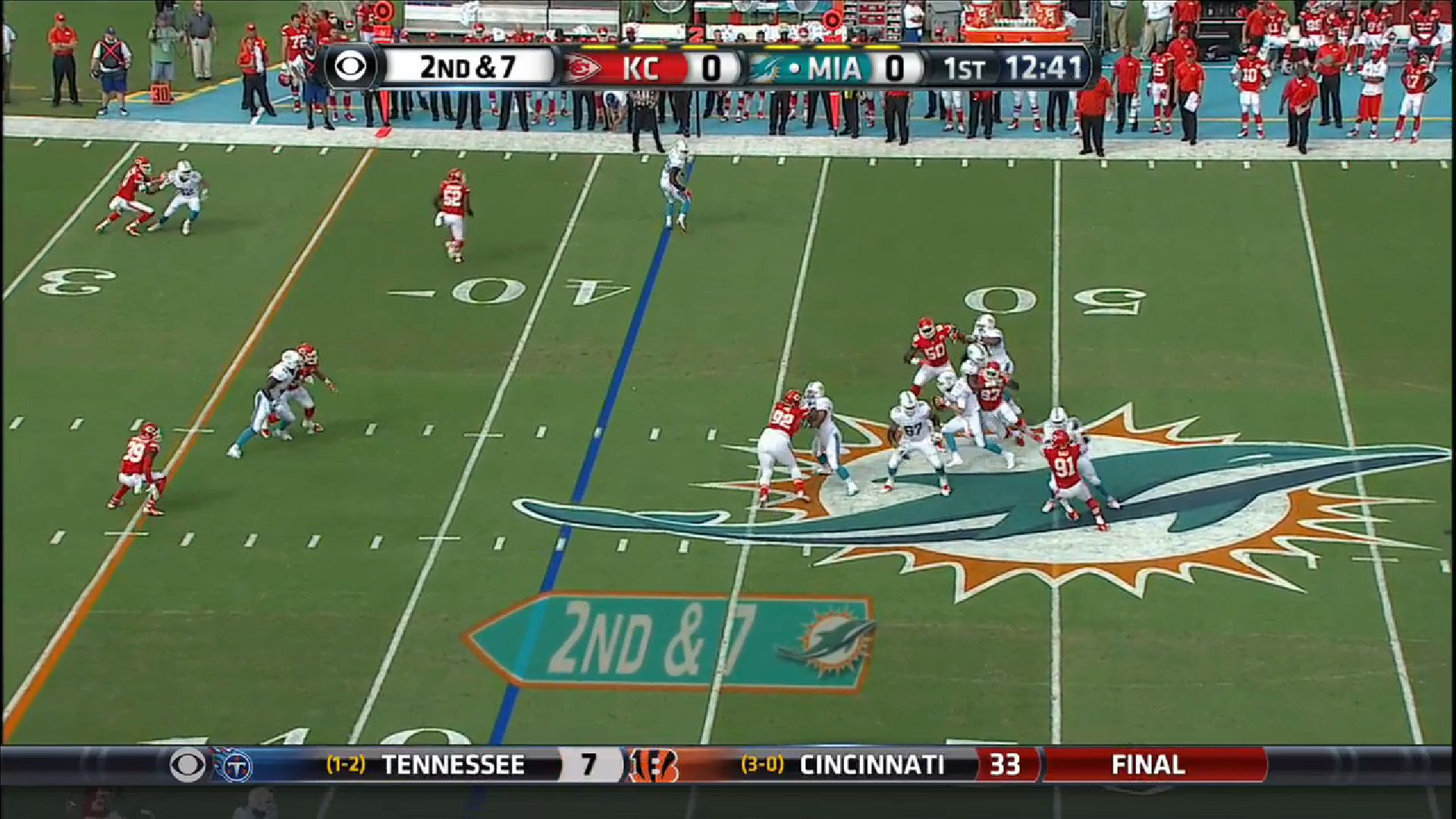 Switching to the "All-22" coaches film from the game, we can now see all five of the Dolphins' receivers, and we can see exactly why Tannehill, in the 2.3 seconds he had to make a decision and deliver a pass, did not get off the pass. There was simply no one open. Charles Clay, in the middle of the field, appears to be the primary target on the play, but he is double covered, with linebackers on either side of him. There is simply no where for Tannehill to deliver the ball, and he takes the sack rather than try to force something that isn't there. 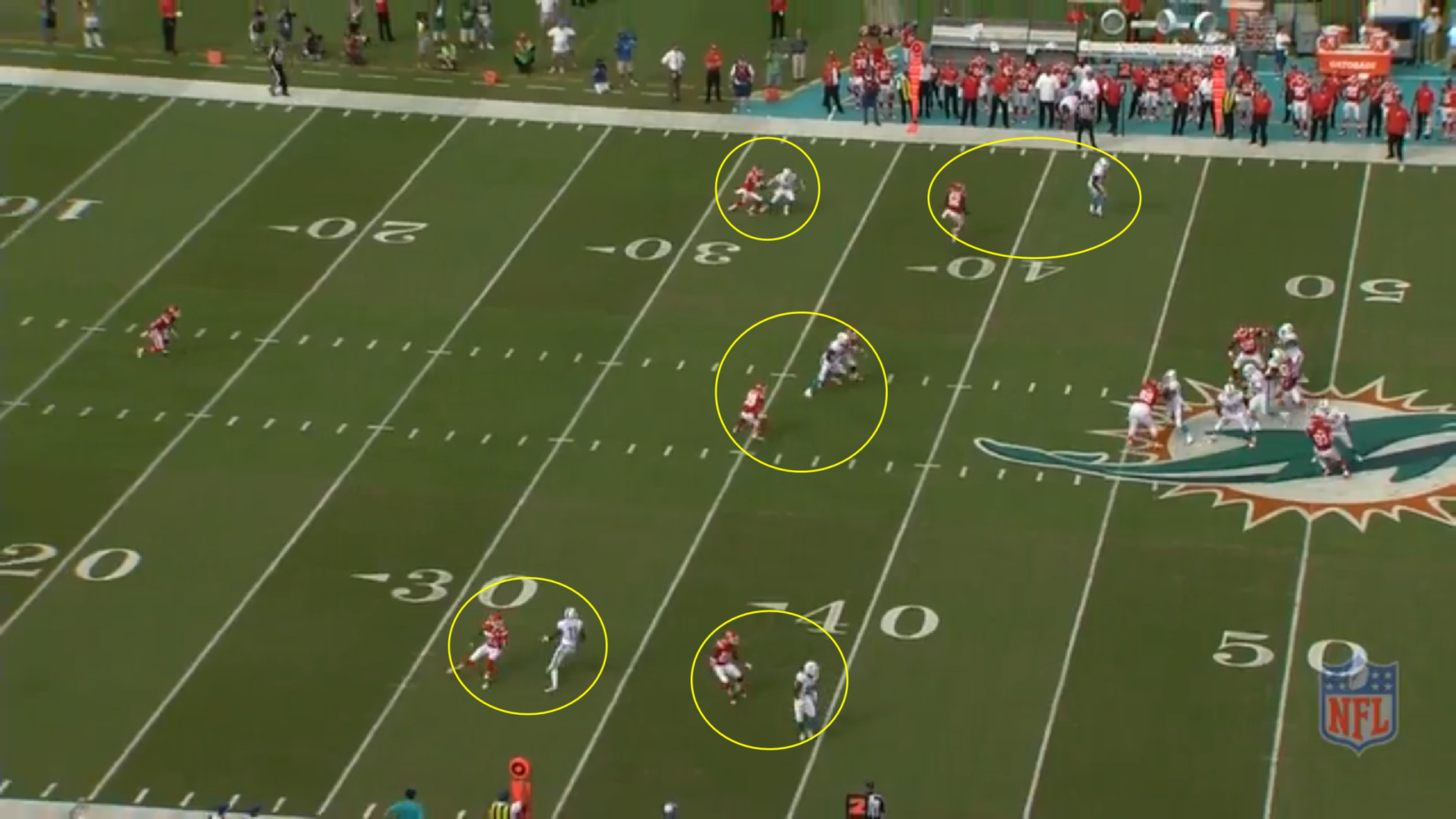 The Chiefs are able to get to Tannehill again mid-way through the second quarter. Miller just broke a 20-yard run two plays before, and the team is nearing mid-field, when Tomba Hali is able to sack Tannehill and force a fumble. The ball somehow bounces back to Tannehill, but the nine-yard loss kills the drive and Miami has to punt.

Tannehill has longer on this play, getting 3.7 seconds before Hali reaches Tannehill. 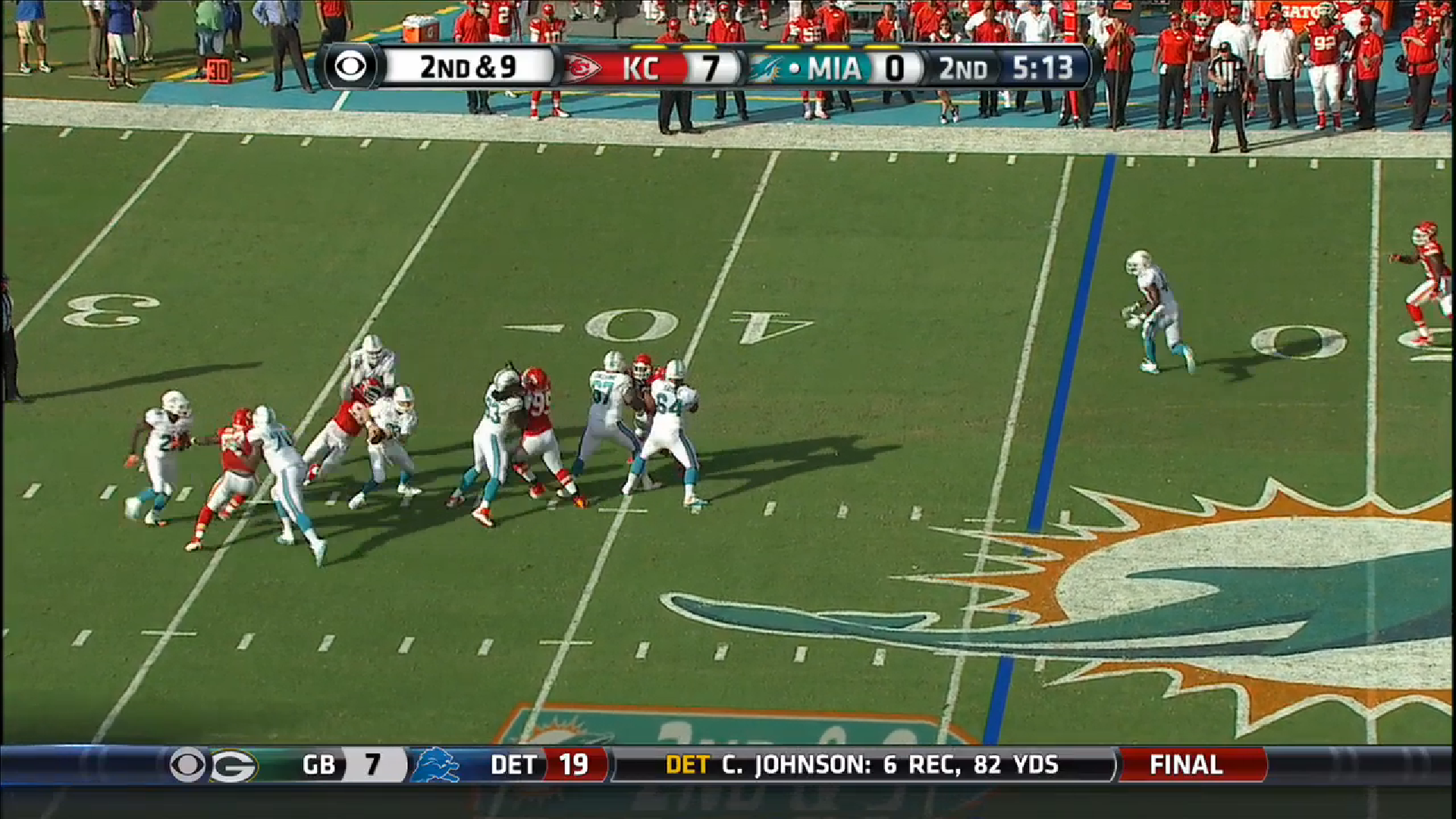 This play is a long developing one, with Tannehill reaching the end of his drop before any of the receivers have even started their breaks. The pocket seems to be forming well, with Tannehill able to step up into it. Unfortunately, with the length of the routes being run, Tannehill does not have a chance to make a quick decision and deliver the ball - no one is even looking for the ball yet, let alone open: 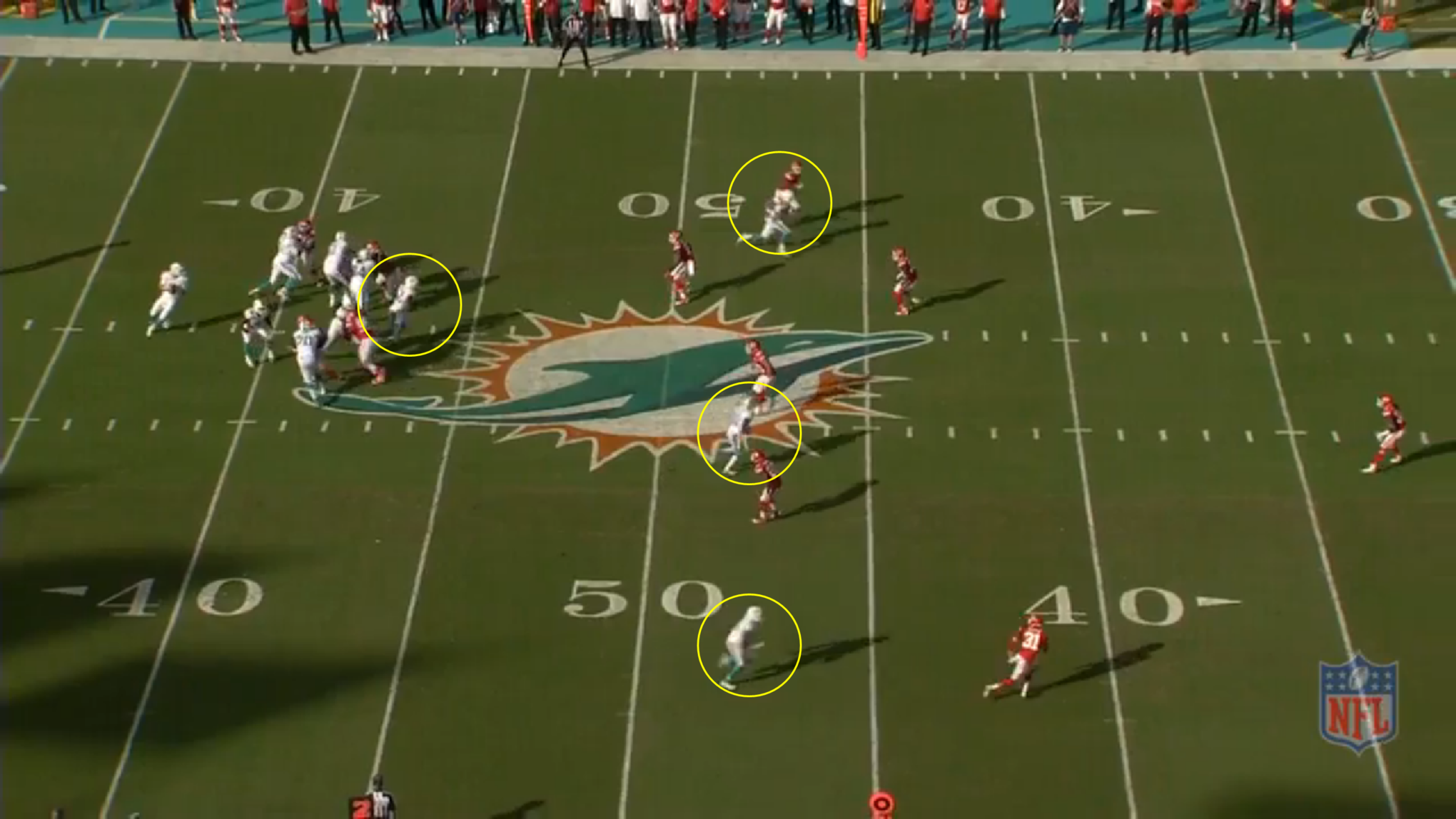 Tannehill does appear to go through his progressions, and probably should have found Clay, coming out of the backfield having lined up as the fullback, but Clay appears to be his fourth read on the pattern. Watching his head after the snap, Tannehill comes off a play fake and take a look at Brandon Gibson, who is at the bottom of the screen, or the far right of the offense. He immediately moves on to Brian Hartline, at the top of the screen. Hesitating there slight, he then comes back to the middle, where Mike Wallace is working the seam of the field. He flicks his head left at the last second, looking like he is then moving to Clay, only to feel the pressure and try to drop the ball and start running. Hali swats the ball and pulls Tannehill down, where he recovers the fumble.

Tannehill probably should have made the decision to run on this play, especially given how long the route tree was developing. As Tannehill is pulled down, Gibson breaks toward the middle of the field and will have a beautiful hole to catch the pass, if Tannehill had more time. Remember, all of this happens in 3.7 seconds. Taking the sack here appears to be a result of a poorly designed play, with four routes all taking time to develop, as well as a quarterback not taking off an running. 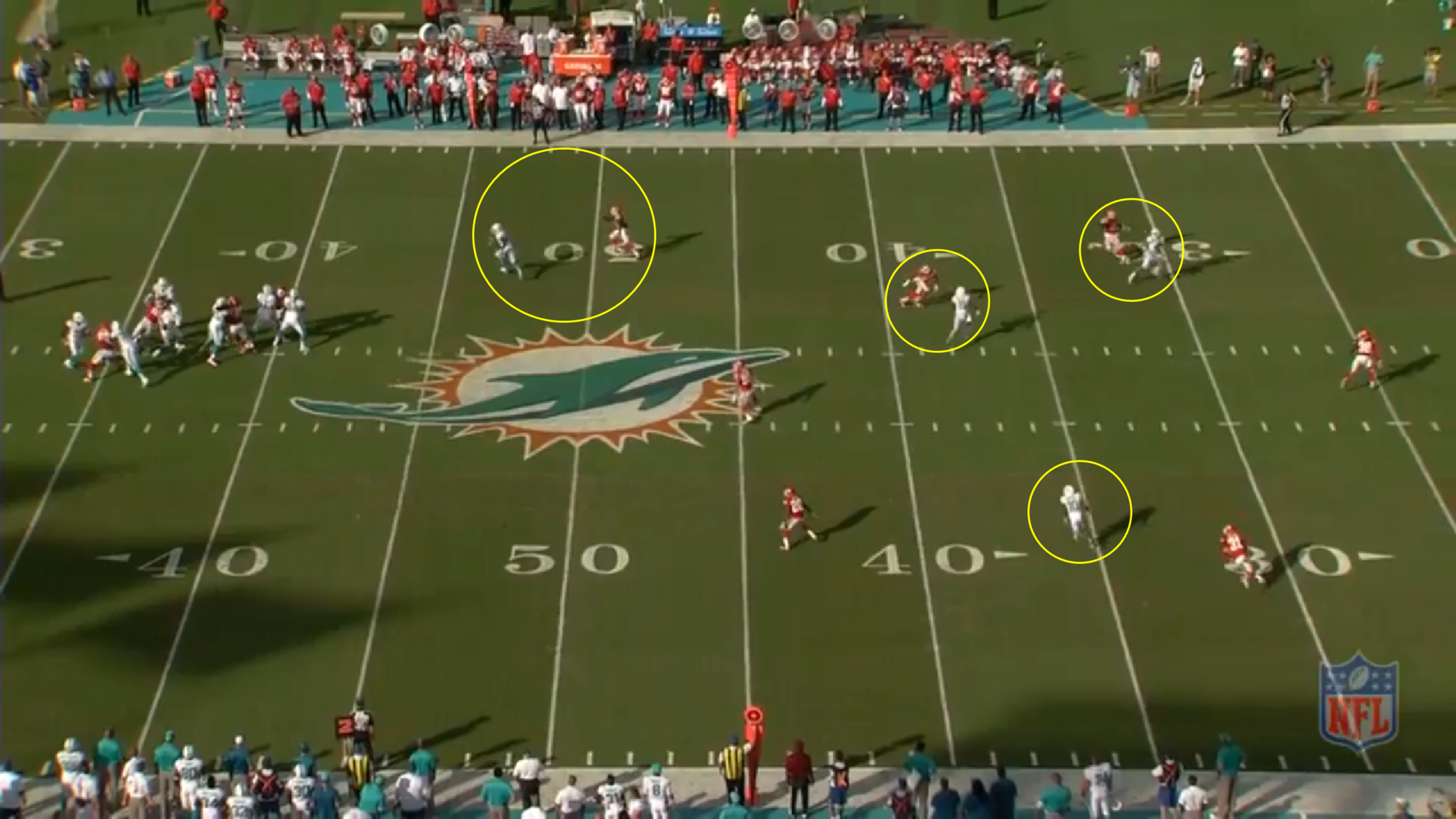 The third sack comes on the opening play of Miami's first possession of the fourth quarter. The team is down 21-15 and has a chance, with a sustained drive, to take the lead and actually put themselves in position to win. With 12:44 remaining and the ball at the 33-yard line, Miami should be looking to attack. Tannehill drops back, but is under pressure in 1.83 seconds. 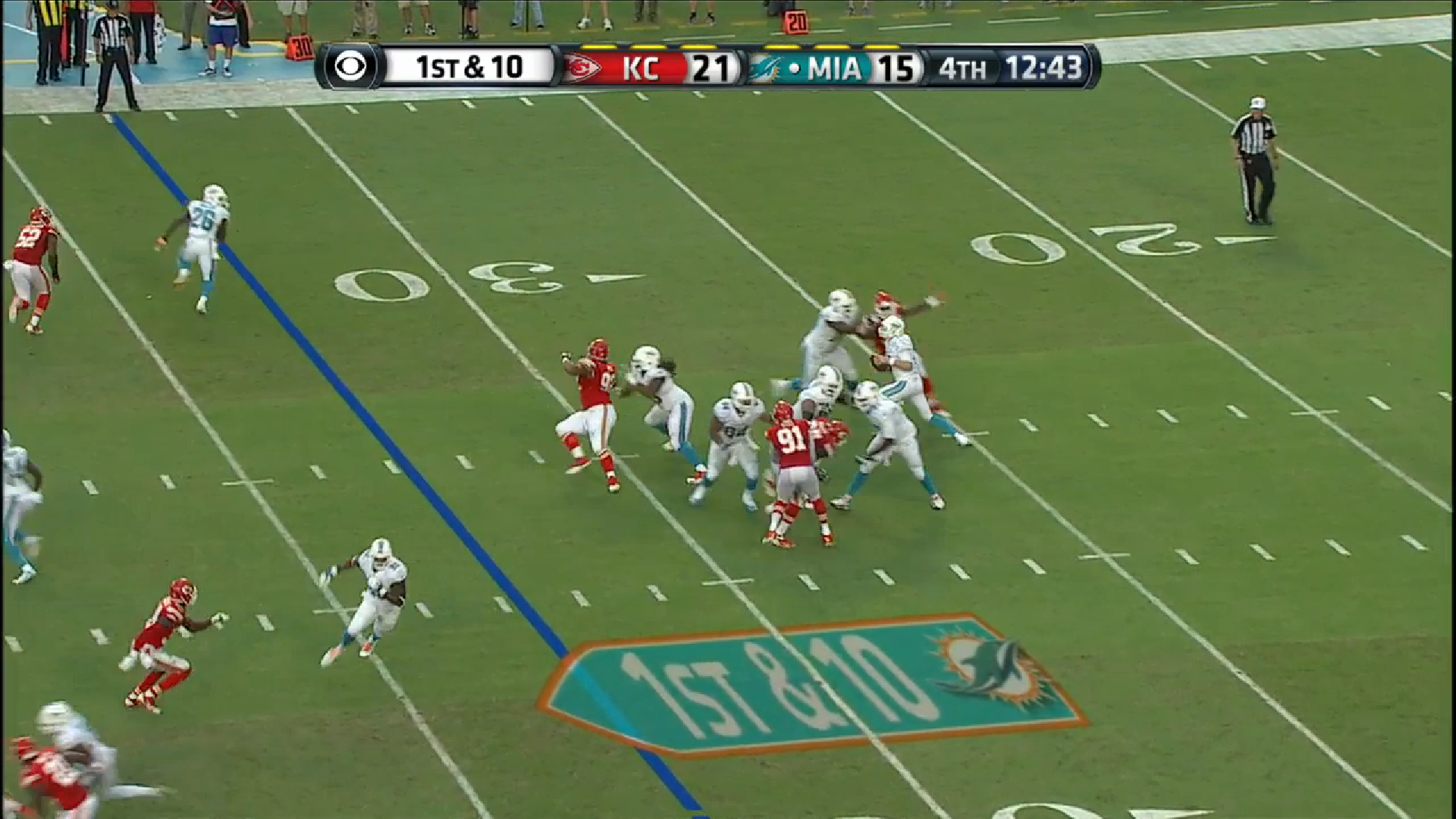 Flipping to the All-22 view, Miami really does not have anyone open in the 1.83 seconds between snap and pressure. 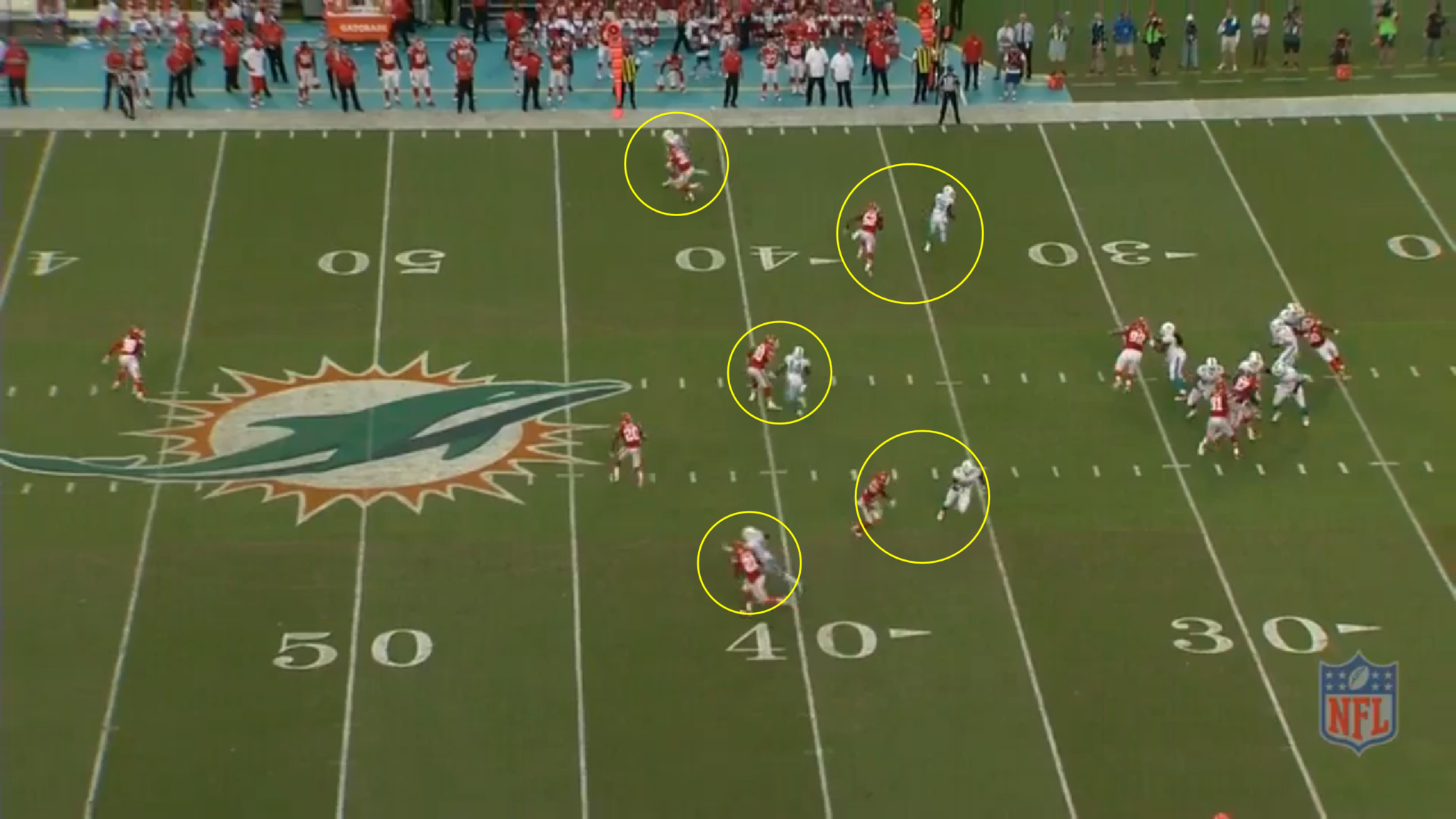 Tannehill does try to run on the play, initially trying to run to his right, where there appears to be a hole as the pressure initially gets to him. The hole, however, quickly closes and Tannehill has to change his desired route (yellow dashed below) to simply run straight forward (blue arrow). He gets caught right as he reaches the line of scrimmage, unfortunately. 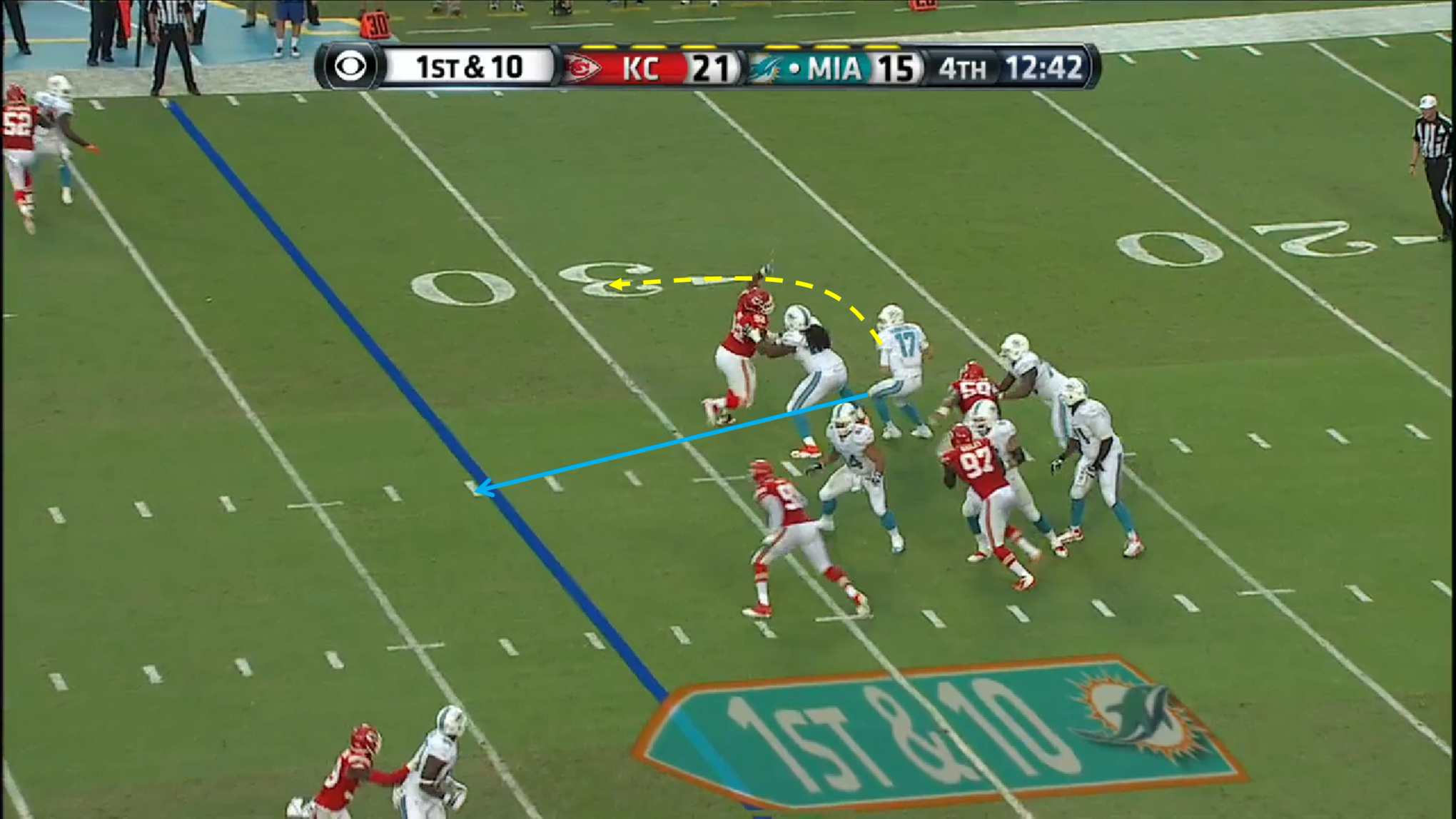 The last sack comes five plays later, as the Dolphins are facing a 3rd-and-1 from the Kansas City 47-yard line. After a play-action fake, Tannehill nicely steps up into the pocket to avoid the initial pass rush. He, however, holds the ball much longer than he needs, trying to find a receiver and winding up with three different Chiefs players all converging on him 3.91 seconds after the snap. 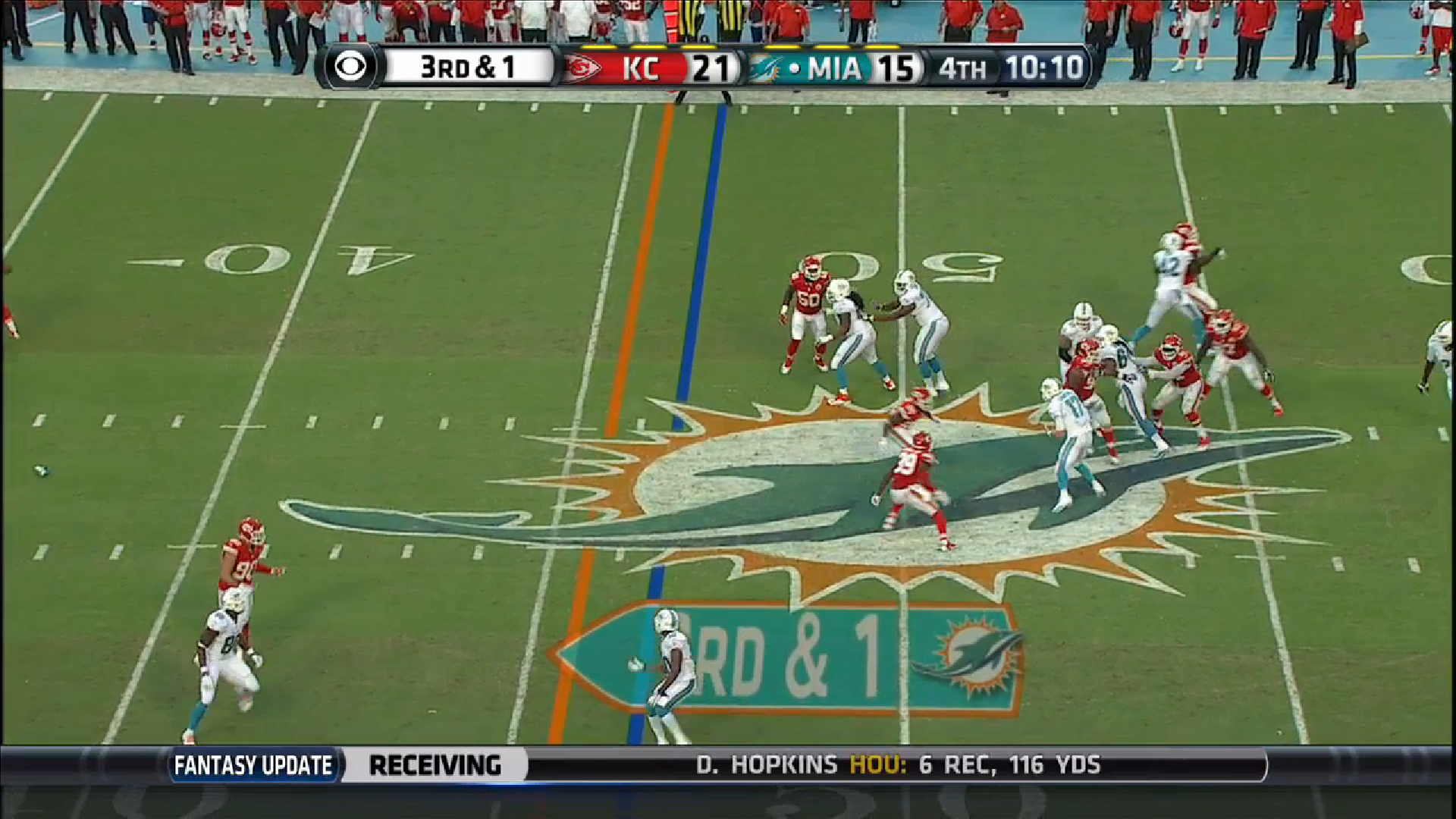 Turning to the All-22, we step back to the end of Tannehill's drop, where you can clearly see, Tannehill has an option to hit Dion Sims, who should be in his eye line. Sims is beyond the sticks, and would convert the first down. Tannehill seems to be hoping the crossing routes deeper come open, with maybe a rub expected that never materializes. He steps up to buy an extra second, but that does not work. 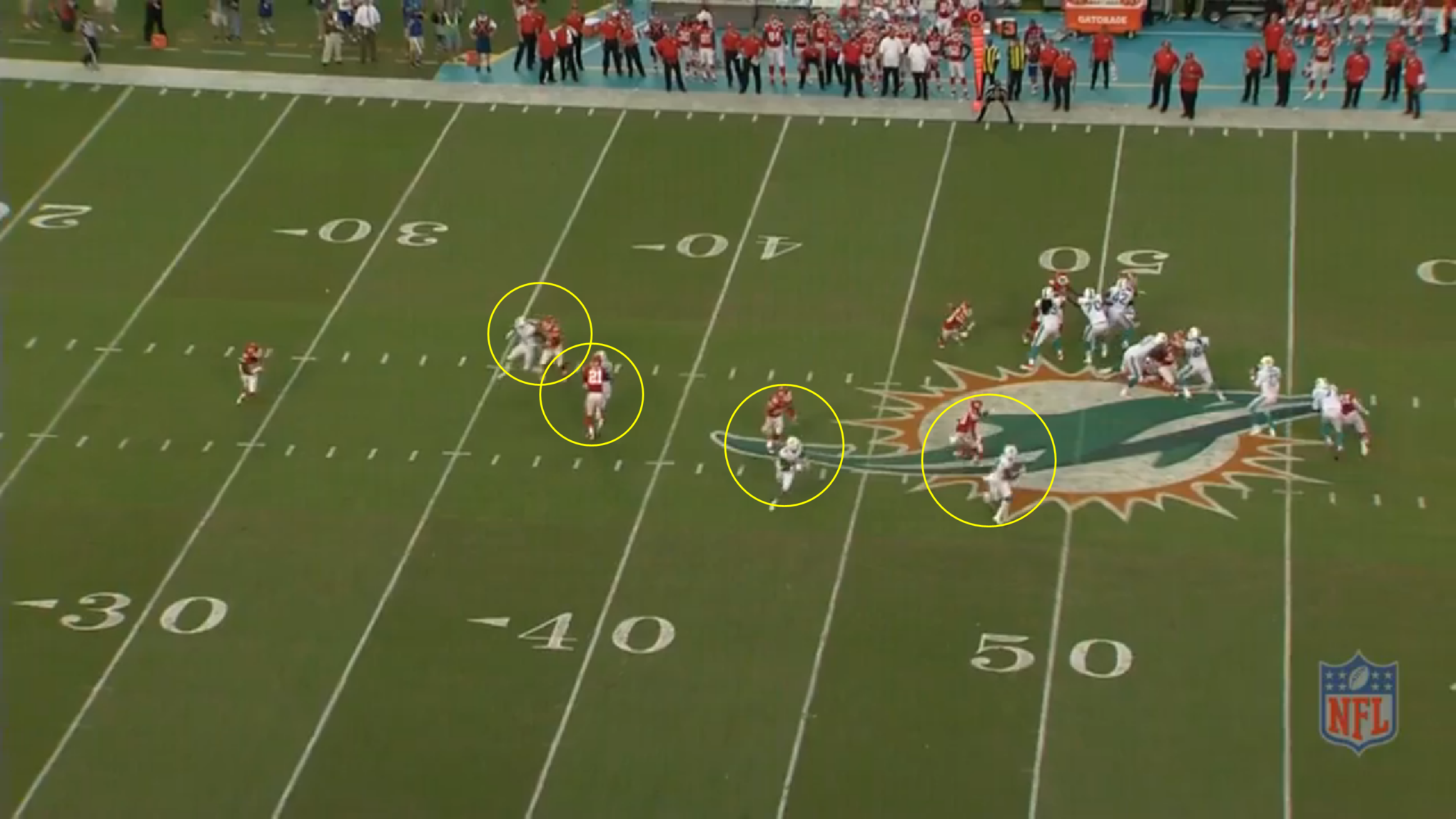 At the point where Tannehill is in big trouble, the only open receiver is Daniel Thomas, who is right at the first-down marker, and may or may not get the spot once the tackle is made. He's also completely turned the wrong way, realizing he is not really in the play, and Tannehill is not going to be able to get the ball that direction. 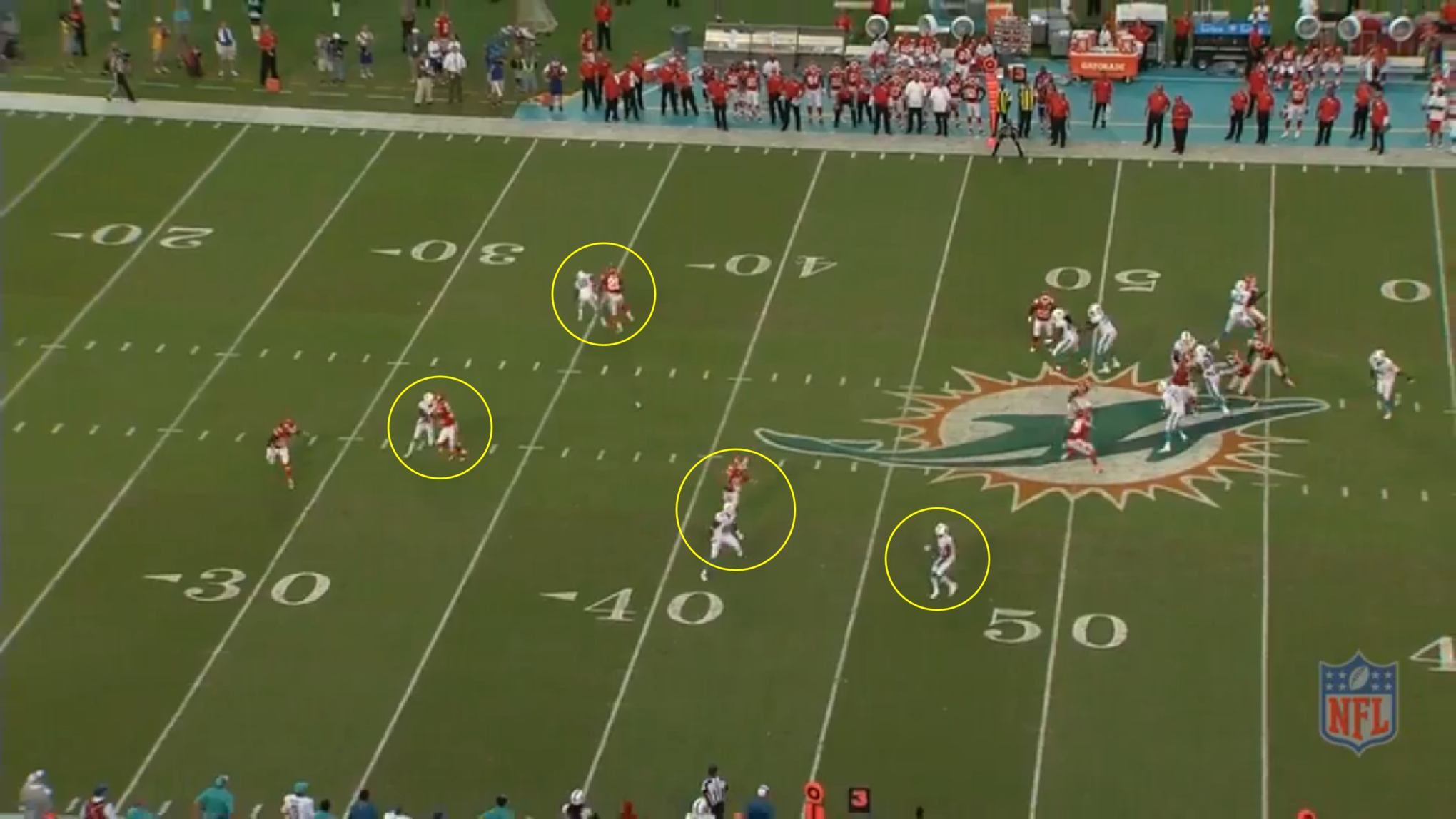 This play should have been a running play - either with Thomas or Miller - and the Dolphins would likely have picked up the first down, continuing to move the chains. The way the play was called, however, could have resulted in a first down, if Tannehill was able to see Sims and get him the ball before the pressure got to him.

I honestly thought I would see exactly what we all expected to see. Tannehill holding the ball too long, missing open receivers, and being sacked. Yet, that's not what is necessarily happening. It seems that on all four plays, something different happened. One play, the pressure got to Tannehill too quickly for anything to happen. One play, the routes were way too long, and Tannehill could not deliver a quick pass because there was no one looking for the ball quickly. One play, Tannehill tried to run, but was blocked before he could escape, and one play was a bad decision. The Dolphins are giving up sacks, but it does not always appear to be on Tannehill. He has problems and has to fix them, especially when he is just standing there looking for one receiver to get open, but he is not always the problem. Receivers are not getting open, or, if they are, it's not before the offensive line allows pressure.

I don't know if this make us feel better about Tannehill, or if it shows other areas about which we should be concerned. Whatever the case, Tannehill has to pick up his game, but so do the coaches, the offensive line, and the receivers. We shall see if they can do that against the Oakland Raiders on Sunday.