The Miami Dolphins have struggled to a 1-2 start to the season. Talk has started that the team should bench quarterback Ryan Tannehill. Our poll shows, fans really don't know what to think of the third-year quarterback.

Should the Miami Dolphins bench Ryan Tannehill? We asked our readers that question yesterday, giving them a chance to vote on whether to bench the Dolphins' 2012 first round pick, let him play a few more games to decide, leave him in as he is not the team's problems, or just be indifferent to the whole situation. The results show, fans are not exactly sure what to do with Tannehill. 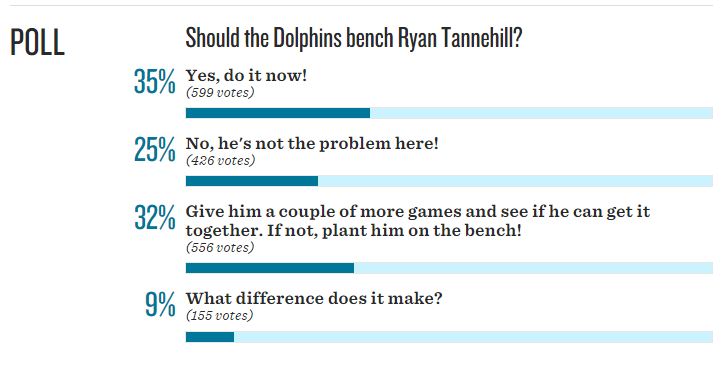 Miami started the season with an impressive win over the New England Patriots, making adjustments at halftime to dominate the second half and turn a 10-point deficit into a 13-point victory. It has fallen apart since, as the team has lost back-to-back games by 19 points, first on the road to the Buffalo Bills then at home to the Kansas City Chiefs. Tannehill's struggles during those games have led to speculation that the Dolphins could bench him in favor of backup Matt Moore.

According to our poll, we, as fans, are not sure that's the right idea. With a little over 1,700 votes, benching Tannehill now has a 40 vote edge on give him a few more games. That's 34.5-percent to 32-percent, with Tannehill not being the problem coming in third at 24.5-percent. Well behind is the indifferent "What difference does it make?" option.

What do you think? If you haven't yet voted, head here to cast your ballot.