Eight thoughts and a few notes on the Dolphins second straight 19-point loss.

The Miami Dolphins lost embarrassingly by 19 points for the second straight week. This time it was the Kansas City Chiefs who handed out the beating, and this time it was in Miami.

Here are a few thoughts on the Dolphins 34-15 loss to the Chiefs.

Lamar Miller ran the ball 15 times for 108 yards, an average of 7.2 yards per attempt. It was a career-best day for Miller after he received much scrutiny during the week.

Miller's longest run was 24 yards, but Miller consistently busted runs of double digit yardage. Miller found running lanes extremely well on Sunday and was a real positive in this game.

The presence of the running game means that there are....

No more excuses for Tannehill 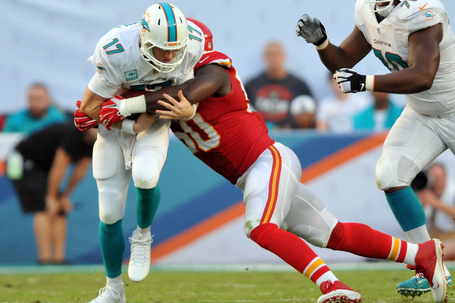 Dolphins quarterback Ryan Tannehill has suffered the highest amount of drops from his receivers (12) in the league. That is the only viable excuse Tannehill has right now.

While drops were an issue again in the first half Sunday (aren't those gloves sticky?), Tannehill was the issue in the second half.

Tannehill had his fair share of good throws, such as the deep cross to Mike Wallace and a checkdown to Lamar Miller as he was being dragged to the ground, but he struggled on third down. Tannehill was 4/10 passing on this crucial down, including 0/2 and a sack on the offense's three attempts at third down in the fourth quarter.

Tannehill's game-awareness seems to be an issue

Tannehill dove for the end zone with from the five yard line on the Dolphins final offensive play of the first half, risking injury for what was a very small chance at making it into the endzone.

Tannehill also ended up taking a sack after failed to see wide open checkdown receiver because he was looking downfield for a big play on 3rd & 1, a play that was the turning point in the game.

Tannehill said of the play, "It was a play-action pass. We played it exactly like we thought we were going to play it. I had two crossers and no one was able to win so I was trying to buy some time and get a run through and I got sacked. [As far as Daniel Thomas goes], he’s supposed to be over the ball so I didn’t see him."

Tannehill has always had issues with pocket presence and knowing when its going to break down. But he just seems lost at times this season.

Something is off mentally with Tannehill. He isn't making the correct decisions or making reads particularly fast, and it is hindering this offense.

Tannehill's weapons cannot always create separation or secure a catch, but that doesn't change the fact that Tannehill's inconsistencies have been on display this season.

Play calling was odd at times. Are players unhappy with coaching?

Dolphins players were reportedly "beyond furious" at the gameplan of defensive coordinator Kevin Coyle and his lack of in-game adjustments.

Certain play calls, such as the zone blitz where Cam Wake was covering the shifty running back Joe McKnight, who was a problem for the Dolphins defense Sunday, were questioned by players and fans alike.

Coyle never adjusted to the power running game that the Chiefs were forcing down Miami's throats and never tweaked his coverages to help his secondary (a unit that's allowed a QB rating of 92.3 on the season).

Offensive coordinator Bill Lazor also had some questionable calls and got conservative far too often. The most astonishing thing that Lazor did was abandon a running game that was working marvelously to that point.

Brian Hartline also said after the game, "If you’re playing the odds, you can’t overcome them all. It gets tiresome. It kind of wears on you."

In other word, playing the odds (that that the matchup you are looking for will be present) is tough to overcome when the matchups aren't there. Then the play becomes one-on-one battles, which the Dolphins lost plenty of yesterday.

Which brings me to my next point...

The Dolphins execution on Sunday was awful. It was another Sunday filled with mistakes.

First, it was three first half drops that stalled drives.

Then, it was lack of sharpness, quick decision-making and accuracy from Tannehill in the second half.

That stat tells the story of the game. Miami's offense had far too many failed third downs and stalled drives while the Dolphins' defense was unable to get off the field and allowed far to many long drives ending in points.

Execution was faulty at key times, and as a result the game was lost.

Does the poor execution root in the players or is it the result of a deeper a problem, being ill-prepared (coaching)?

Why doesn't Tannehill use his athleticism more?

When you see Andy Dalton (who isn't particularly athletic) score a touchdown as a receiver, it makes you scream for better use of Tannehill's athleticism.

Tannehill was rolled out once on Sunday, and the play resulted in the Dolphins only touchdown of the day.

Tannehill is very good when on the move.

Tannehill has been struggling this season.

Wouldn't it make sense to use Tannehill in ways where he will be more comfortable and effective to build his confidence and some offensive success?

Defensive line held up it's end of the bargain

The Dolphins' defensive line tallied five sacks on the Chiefs mobile quarterback, Alex Smith, including a safety in the third quarter.

Earl Mitchell was an animal on Sunday. Mitchell was penetrating all day despite facing double teams often and created havoc in the Chiefs backfield. Mitchell was playing hard until the end of the game, recording a tackle for loss on a late-fourth quarter drive when the Chiefs had virtually already sealed the game. Mitchell has proved to be a fantastic replacement for Paul Soliai.

Jared Odrick recorded a strip/sack on Alex Smith, and Randy Starks was in on the safety. Derrick Shelby had a sack and both Cam Wake and Olivier Vernon had a tackle for loss.

The defensive line did a good job of penetrating, but the play of the linebackers was questionable...

Linebacker Jelani Jenkins was all over the field Sunday. Jenkins recorded 15 tackles (11 solo) and 1.5 sacks against the Chiefs, setting career-highs in both. 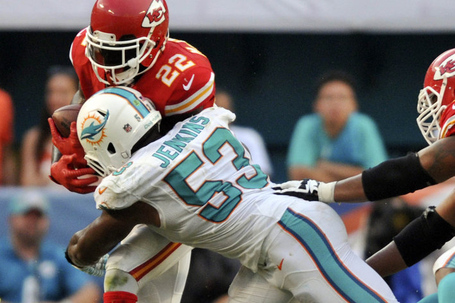 Jenkins had his fair share of mistakes against the Chiefs. Jenkins was out of place on a 21-yard touchdown run by Knile Davis and had trouble covering Chiefs' running back Joe McKnight, who had six receptions for 64 yards and two touchdowns.

However, the progression of this second-year pro, who has been playing faster and more aggressively, has been a bright spot through these troubling times the past two weeks.

On the third quarter safety that he helped create, Jenkins was an absolute beast.

Jenkins and Trusnik stunted and then both blitzed on the play. Trusnik came in free, but by the time Trusnik stunted around the formation and through the open gap, Jenkins had already powered through Chiefs' running back Knile Davis' block and grabbed Alex Smith. Randy Starks helped drag Smith to the ground and the deficit was cut to just six points (21-15).

Philip Wheeler made a tackle for loss on the day, but, like the entire linebacking corps, was out of place at times, leading to big runs. The defensive linemen did their jobs, but the linebacking corps couldn't always fill the correct gaps and make the tackles.

The Chiefs ran for 174 yards on 41 attempts on the day. Knile Davis had a field day, busting multiple double digit runs and scoring two touchdowns. Davis was contained most of the day, but began to break out after a 21-yard touchdown run.

The season is not over, but something has to change

There's 13 games left in the season. But if this team continues on this downward spiral, people will lose their jobs.

Something has to change. This team needs to play with more consistency and fire, and they need to execute better in order for things to change.

Tannehill seems to understand his dilemma. "It's still early in the season, so I have confidence that we can get this thing turned around. But it has to happen now. I said that last week and we didn't get it done."

The offense needs to sustain drives and limit mistakes, and the defense needs to get off the field on third downs. It's that simple.

Now, the coaches and players must go to the drawing board and find a way to make it happen.

The New Orleans Saints, San Francisco 49ers and Green Bay Packers are all 1-2. The team that just trampled Miami is 1-2. The season is not over. But things need to change, and fast.

- All three of Brian Hartline's catches came on third down. Some things never change....

- End of first half was weird again. Bad clock management forced the Dolphins to settle for a field goal in the redzone as time expired.

- The sack on 3rd & 1 was the turning point in the game. The Dolphins were only down by six when the play happened. The following punt was also returned into Miami territory and led to points for the Chiefs.

- The offensive line played quite well despite the four sacks allowed. At least half of those sacks were on Tannehill for holding the ball too long.

- The Dolphins rushed for seven yards per carry, the ninth-highest total in team history for a single game.

- The Dolphins were outcoached by the Chiefs. Andy Reid was able to exploit the Dolphins weaknesses, and Miami's coaching staff was not able to adjust.

- Brent Grimes showed resilience and effort when he came in to strip Knile Davis to give the Dolphins the ball back late in the fourth. Unfortunately, it was too little too late.

- Jarvis Landry's drops have come often and have been surprising this season. The rookie has very good hands and talent, but embodies the entire Dolphins team with these simple mistakes.