A look at what Lamar Miller really is as a running back following a week of scrutiny for the third-year player.

Share All sharing options for: The Truth About Miami Dolphins RB Lamar Miller

In wake of a subpar game against the Buffalo Bills, which featured two key drops, running back Lamar Miller has been the subject of much scrutiny. Many, including myself, have torn into Miller.

Miller has suddenly been trusted into the lead back role that he struggled to fill in 2013 now that Knowshon Moreno will be sidelined for at least a month with an elbow injury. This has many feeling uneasy, but should it?

What is the truth about Lamar Miller as a player?

Well, Miller has a great amount of potential.

It's that potential that fueled the decision to let Reggie Bush walk in free agency without as much as a contract offer after the 2012 season.

It's that potential that makes Miller such a frustrating player.

Miller, much like quarterback Ryan Tannehill (also drafted in 2012), needs to close the gap between potential and production.

In stark contrast to the new narrative following him after last week, Miller has been progressing steadily as a running back and has been playing much better this season. Against the Bills, who smothered the Dolphins in the trenches, Miller ran for an impressive average of 4.2 yards per carry.

The things that Miller has done well in 2014 are very encouraging.

Miller has been very good at picking his paths this year and has had very few negative runs. Miller has been more decisive on when to use his speed to get outside and when to pick his way through a defense.

Miller has rushed 22 times for 105 yards, an average of 4.8 yards per carry. This coming with a long of only 13 yards, which shows the consistency that Miller has been rushing with. Miller has also been stout in pass protection this season.

These are all things that Miller struggled with mightily in 2013.

The things Miller hasn't done well this season, however, have overshadowed these progresses.

Miller has had trouble catching the ball consistently. Miller has six catches for 26 yards and a touchdown, but he had two crucial third down drops against the Bills.

Miller's lack of balance has led to a large amount of yards left on the field. 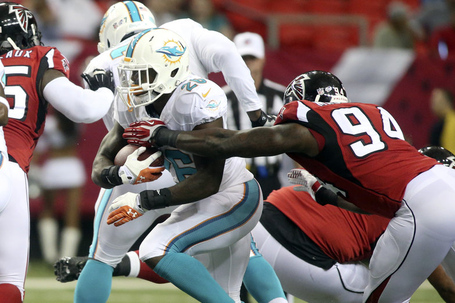 If Miller was able to keep his balance through arm tackles, like the one pictured above, his career would be viewed entirely differently. It's tough to fault Miller for lack of physicality, toughness, and ability to finish runs because he has never been that type of back (you must possess the mentality and body type), but balance is different than physicality. Balance is the reason backs such as LeSean McCoy break tackles, not physicality.

The lack of ability to catch the ball consistently is a huge hindrance to the Dolphins' offense. Miller needs to greatly improve in this area to ever be considered a number one or complete back.

The lack of balance is more a hindrance on himself. As previously mentioned, Miller's career would be viewed so much differently if he could keep his balance through arm tackles. Miller leaves at least one big run a game on the field due to lack of balance.

Miller has great speed and has potential to wreak havoc in the open field. He just needs to get past the first level of a defense and break more tackles to be in position to use this speed.

Is Miller is the future at running back for the Dolphins? No, and I believe the Dolphins still need to give optimum carries to Damien Williams and Orleans Darkwa to see if either can be a regular contributor in the future.

But, Miller is much better than given credit for and is one of the best second-option backs in the league.