Who Should Start at RB for the Miami Dolphins Sunday vs the Kansas City Chiefs?

An in-depth look into who should assume the majority of Dolphins running back duties Sunday against the Chiefs in wake of Knowshon Moreno's gruesome elbow injury.

Share All sharing options for: Who Should Start at RB for the Miami Dolphins Sunday vs the Kansas City Chiefs?

For clarity's sake, I will start this article off by saying this-- the player who "starts" isn't always the one who plays the most snaps. The real question in regards to the Miami Dolphins' running back situation is who will receive a majority of the reps when the Dolphins take on the Kansas City Chiefs in Sun Life Stadium this Sunday.

Veteran running back Knowshon Moreno out for at least a month after dislocating his elbow against the Buffalo Bills. This creates a conundrum for the Dolphins as Moreno provided a mix of energy, production and leadership that is hard to replace. Nevertheless, Miami must find a way to do just that.

In offensive coordinator Bill Lazor's system, the running back must be able to:

Knowshon Moreno possesses all of these traits, which is why he produces in this offense.

So now that we know what we are looking for in our back, let check out the candidates. 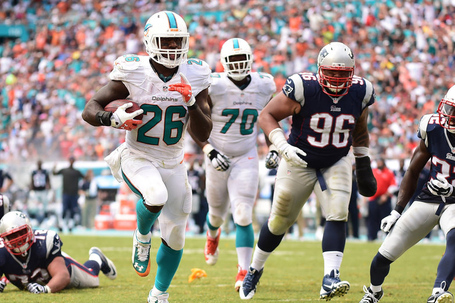 Lamar Miller, who has started both of Miami's games this season, is nursing an ankle injury he sustained against the Bills. Miller's injury isn't serious and he is expected to play Sunday, but frankly Miller's performance last season and this season hasn't warranted the return to a broad role. Miller handling a majority of the snaps becomes even less desirable when factoring in his injury.

Miller has been the cause of multiple hindering plays in this young season. Miller fumbled against the Patriots in Week 1 and had multiple third down, drive-stalling drops against the Bills.

While Miller has been running the ball better than ever this season (22 attempts for 105 yards, or 4.8 yards per attempt) his struggles as a receiver have been tough to swallow. When Miller has been thrown to this season, he has either dropped the pass, fallen or both.

Miller also doesn't run particularly tough and seems to run without balance at times. I don't mean to dig into Miller too hard as I've been a fan of him since his days at the University of Miami. Miller really has been running much better this season but his shortcomings in other areas have been hard to accept.

Miller is a great change-of-pace back and is a weapon due to his speed, but his inability to catch cleanly limits the things Lazor can do when Miller is on the field. Still, Miller can be utilized in many ways (kick returner possibly?).

Miller's struggles lead me to believe that Miami will look to give another back an extended amount of reps.

Moreno's mix of charisma, talent, production and leadership on the field is tough to replace. That being said, I feel the Dolphins best chance would be with Williams. Williams has clear talent that landed him a spot on the Dolphins 53-man roster and has looked good in his limited time on the field. 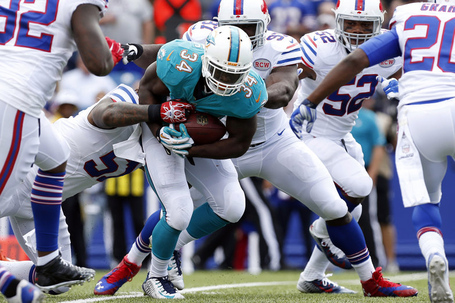 Williams, at 5-11, 220 pounds, is a physical runner who, like Moreno, takes on multiple defenders before going to the ground (as shown in the picture above). Seeing Williams, Moreno or any running back show the determination to keep their legs driving while being swarmed by defenders motivates an entire offense to perform at a higher level.

Williams isn't just a bull-type back. Williams also is a shifty speedster who ran a 4.45 in the 40-yard dash.

Dolphins head coach Joe Philbin has said good words about the rookie. "He didn't look out of place," Joe Philbin said of Damien Williams' performance against the Bills. "He hasn't had a lot of carries, but we like what we've seen."

Williams, as an undrafted free agent, plays with a fire that cannot be underestimated and a hunger to achieve more. Williams said, "I'm very hungry, and you've to stay that way."

Williams is also a reliable pass catcher. Williams hasn't been targeted this season, but he proved he has soft hands throughout the preseason and in his days at Oklahoma.

The negative on Williams is that the rookie is sometimes indecisive and picks questionable routes when running. This fault could hinder the amount of yards gained on any given play if Williams misses an opening or fails to see it in time.

Also, pass blocking is a huge question mark with Williams at this point, as it is with most rookie running backs.

Darkwa is the (no pun intended) dark horse of this race. Darkwa is often the forgotten-about man when discussing the UDFAs who made the 53-man roster this season, but Darkwa made it for good reason.

Darkwa's decisiveness with the ball in his hands rivals that of Moreno's and he has above average ball-carrier vision. Darkwa, who wore the number 3 at the time, had 70 yards on six carries against the Dallas Cowboys in the preseason and can produce big plays for this offense. 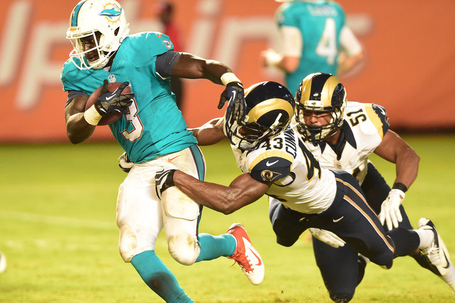 Darkwa is a very good pass catcher. In his first regular season game action last Sunday, Darkwa caught a few slightly-low passes in stride and produces yards after the catch. Darkwa caught the ball on all three of his targeted and gained 31 yards. Two of his catches went for first downs.

Darkwa is slippery and tough to tackle, though he doesn't break tackles with the same force that Williams does.

Darkwa is a smooth runner who deserves, and will likely get, extra reps this week against the Chiefs.

The old cast-off in Daniel Thomas has returned. I know Thomas won't be the one to assume the workload, but I figured I'd mention him anyway.

I'm completely on board with the signing of Thomas, by the way. Many were against it simply because of their deep-rooted hate for the guy (sounds harsh and is harsh), but think about it logically. Thomas knows the Dolphins offense and can play this Sunday. Can the same be said about any other free agent running back?

Thomas could possibly find himself working in a third down role against the Chiefs Sunday if the Dolphins want a reliable pass catcher who's also a capable pass blocker on the field.

Miller has two(ish?) of the three requirements of Bill Lazor's offense, but he doesn't have #2 (which is nearly as important as #1 in this offense Miller does not posses the desired trait of physicality. Miller's vision has improved this season, as has his pass protection, but those unnatural hands are a hindrance.

Williams only meets one and a half of the required traits listed above. However, Williams has all of the preferred traits mentioned. I expect Williams to receive a major portion of the reps this Sunday as the Dolphins explore what this UDFA can provide to the team.

Darkwa definitely possesses two of the three criteria listed above, which is more than any other candidate can boast. Darkwa also has a slippery type of physicality to him and quickness. Though I feel Darkwa is a very fitting back for this offense, he may have his touches limited by Williams and Miller, who are higher on the depth chart. Look for Darkwa to shine anytime he gets on the field.

Thomas actually meets all three of the categories mentioned. However, he has none of the preferred traits. Thomas is a big back, so physicality seems as though it should come naturally to him. Yet, physicality has never been his game. Perhaps this is why so many hold grudges against this former second round pick.

I believe the Dolphins may have struck gold with one of these UDFA running backs, and the fact that the Dolphins kept the rookies around says that they feel the same may be true.

Sunday is the time to test the waters and see if either of these two is a diamond in the rough that can contribute regularly and possibly even take over the running back duties long-term (Moreno is on a 1-year contract and Miller's not the long-term answer).

A split workload for Williams and Darkwa is preferred, but Miller will get his reps.