The Miami Dolphins lost to the Buffalo Bills on Sunday, We look at the stock rating for the Dolphins from the game.

Share All sharing options for: Dolphins vs Bills Stock Watch for Miami

The Miami Dolphins were demolished by the Buffalo Bills on Sunday, getting beat in all three aspects of the game. The Miami offense could not get into rhythm, the defense could not stop the march up-and-down the field by the Bills offense, and special teams was anything but special. The stock watch this week for the Dolphins may be a little more bear-ish than we would want.

Stock Up: Daniel Thomas, running back - The former Miami running back is now the current Dolphins running back. With injuries to both Knowshon Moreno (dislocated elbow) and Lamar Miller (ankle), the Dolphins had to go re-sign the running back they released at the end of the preseason. With a performance like the one they had against the Bills, a player not even on the roster makes the most sense for an up stock rating for the Dolphins.

Stock Down: Special Teams - There is no way to separate any of what went wrong with the special teams on Sunday. The Bills simply dominated the Dolphins throughout the day. Even if you do not want to count the blocked punt against Brandon Fields, his two shanked kicks did not prevent him from being thrown into the stock down mix. Wide receiver Jarvis Landry muffed a punt return, giving the Bills great field position. The kickoff coverage allowed a 102-yard touchdown return from C.J. Spiller. The only game where I have seen special teams mistakes as bad as this was the Dolphins' 62-7 loss in the playoffs against the Jacksonville Jaguars in Dan Marino's last game (remember punter Tim Hutton completely missing the ball on a kick?). Seemingly, the only thing that went right for Miami on special teams was when Dan Carpenter, the former Dolphins and current Bills kicker, hit the upright on one of his five field goal attempts.

Stock Up: Dolphins run defense - I know, you are going to immediately say that this is wrong. I don't think it is. Spiller broke a 47-yard run on the Dolphins defense, on a play where Spiller was able to get to the edge around Cameron Wake, then outrun Jason Trusnik, and bypass tackles from Brent Grimes and Will Davis. That play was bad and basically ended any hope for Miami in coming back in the game. If you take out that one play, however, the Dolphins run defense held up, holding the Bills to just 65 yards on 32 carries, or 2.0 yards per carry. With that 47-yards, the Bills averaged just 3.0 yards per carry. Miami's run defense, specifically Earl Mitchell and Randy Starks, were great up the middle. Trusnik - other than being out run by one of the fastest players in the league - and Philip Wheeler played really well against the run, and Jelani Jenkins held his own as well. There was a horrible play, but as a whole, the run defense was there.

Stock Down: Miami receivers - Somewhere along the line, Miami's receivers (including running backs and tight ends) forgot how to catch the ball. Pro Football Focus recorded five drops for the Dolphins on Sunday, but it seemed even worse than that. At a minimum, the drops came on key plays, with at least two on third-down plays that would have resulted in a first down. Mike Wallace may be the only receiver exempt from this, as he did not register a drop, and he had a beautiful one-handed touchdown reception, but his day was not stellar enough to pull the rest of the receivers out of a stock down rating.

Stock Up: Ja'Wuan James, offensive tackle - Yes, technically James allowed a sack to Mario Williams, one of the four sacks suffered by Ryan Tannehill on the day. But, that's not actually looking at the play: 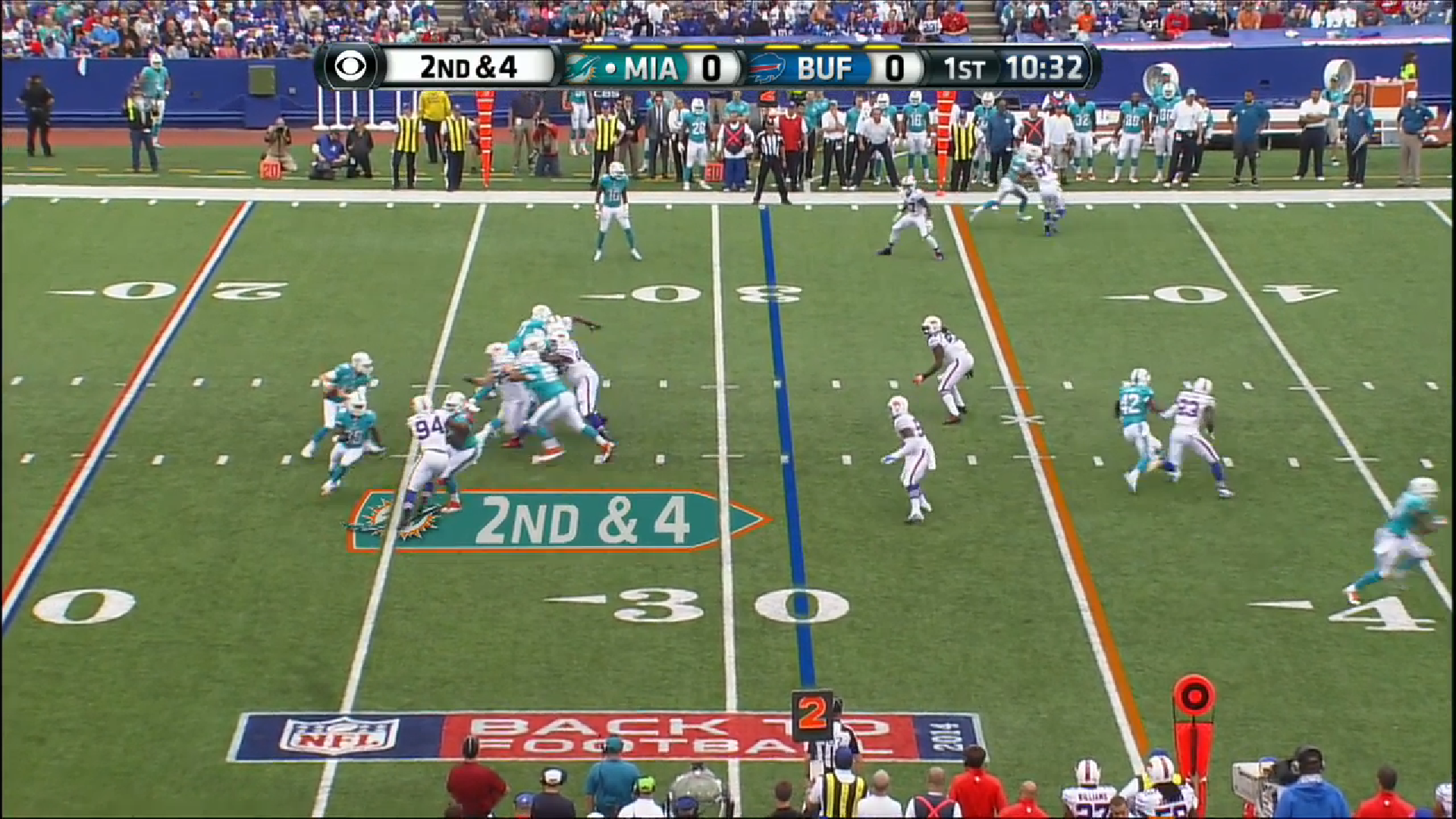 James has Williams handled here (Williams is number 94, on the Dolphins logo in the "2nd & 4" graphic). It's Kyle Williams coming up the middle from a missed block by Shelley Smith that is the issue. Tannehill has already had to pull the ball down and is starting to try to figure out how to sidestep the pressure. 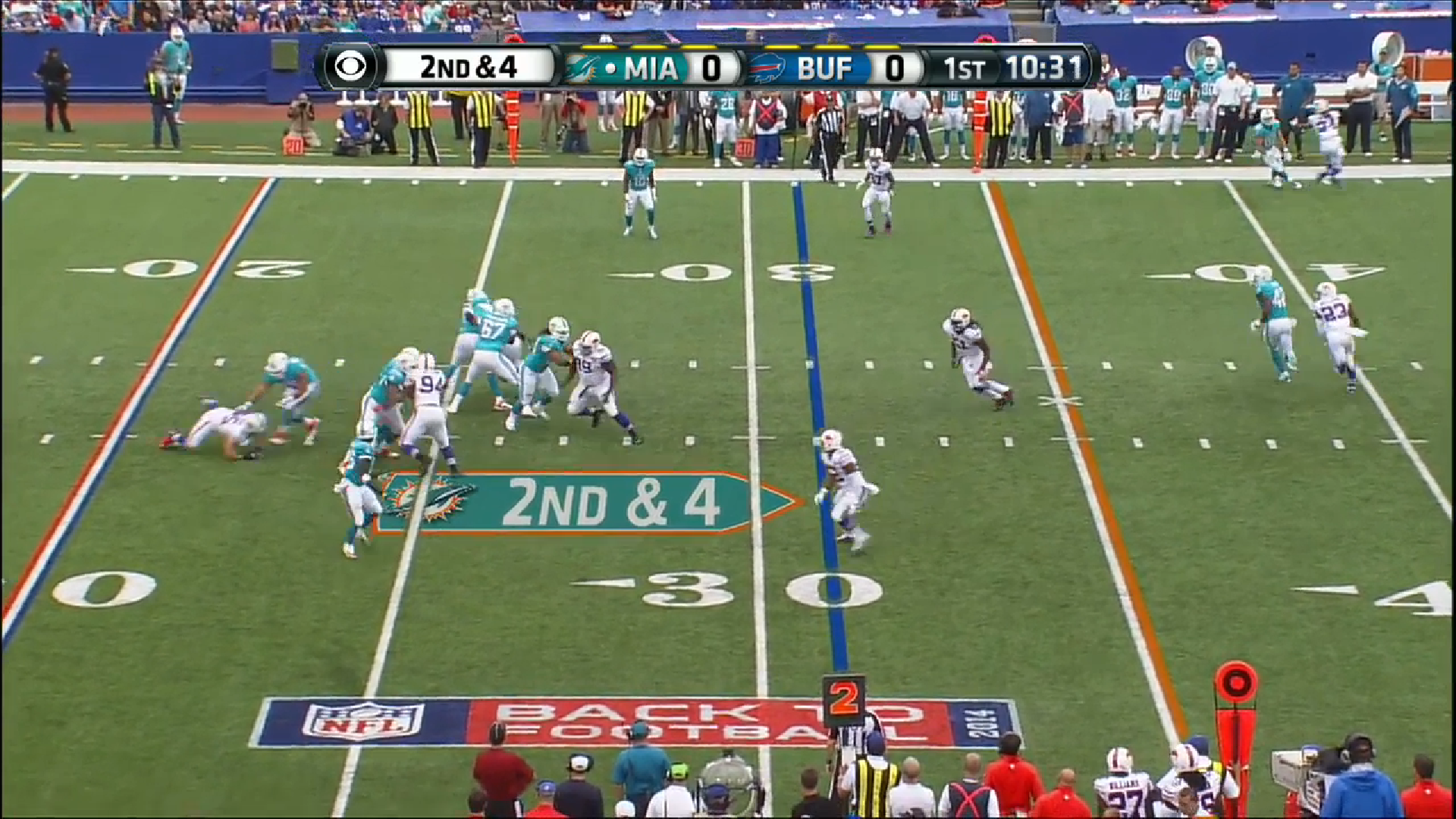 He's able to do it, with Kyle Williams ending up on the ground 10-yards behind the line of scrimmage. In doing, so, however, Tannehill has stepped up next to the Mario Williams/Ju'Wuan James engagement, making it too easy for Mario Williams to simply reach over and grab Tannehill. There's nothing James can do in this situation. Other than this one play, Williams disappeared on the day. He played 55 snaps, pass rushing on 41 of those, and had this one play. James shut down one of the top pass rushers in the game, and he did it without many people noticing.

Stock Down: Ryan Tannehill, quarterback - Okay, the calls for a new quarterback are WAY over the top, but Tannehill did struggle with accuracy during the game. Whereas he got better in the second half of the New England Patriots game in Week 1, this week, he was not able to correct it. He again under threw some deep passes, although the one that went through Brian Hartline's hands should have been caught given it went through his hands. At the end of the day, Tannehill did have the most attempts and completions in a single game in his career, and he was not so bad that the team could not win with the issue - especially if some of the receivers' drops were caught instead, but it's still worrisome and something that needs to be addressed.