7 Things to Watch in Miami Dolphins vs Buffalo Bills

Seven things to keep and eye on when the Dolphins take on the Bills in Buffalo, including a bold prediction of the game's outcome.

Share All sharing options for: 7 Things to Watch in Miami Dolphins vs Buffalo Bills

The Miami Dolphins have traveled North seeking redemption for an embarrassing 2013 loss and, more importantly, a 2-0 start.

The Buffalo Bills swept the season series between these two teams in 2013, including a 19-0 loss in a game with playoff implications. However, much has changed between now and then, and Miami is eager to prove that to the Bills and the nation.

Keep an eye on these seven things when the game kicks off at 1 pm ET.

1. Who wins the battle at the line of scrimmage

The Bills' defensive line is dominant and will present a tremendous challenge for the Dolphins' rebuilt offensive line. The Bills have two forceful interior linemen in Marcell Dareus and Kyle Williams, and we all know the torment that defensive end Mario Williams can provide.

Samson Satele, Daryn Colledge and Shelley Smith will have a huge impact on this game. The interior trio of linemen needs to get a consistent push in the running game and create creases for the backs to run through. Expect to see a good amount of zone-read plays to get the Bills' defensive line moving sideways.

These three will also have their hands full in pass protection. Dareus has 18.5 sacks in the first three years of his career and Kyle Williams is an underrated pass rushing threat who had double digit sack numbers last season. I'm confident in Shelley Smith's run blocking ability, but he struggles in pass protection. Don't be surprised to see a few interior pressures allowed.

Mario Williams versus either Branden Albert or Ja'Wuan James (Williams switches sides) will be a matchup to watch. Williams single-handedly won the first game between these two in 2013 with a sack/fumble that put the Bills in position to kick the game-winning field goal.

The Dolphins winning the line of scrimmage on defense is key to winning. Forcing EJ Manuel to win the game with his arm is exactly what the Dolphins want to do, and that starts with stopping the run.

Also, being able to win the LOS at the end of the game, as was successfully done against the Patriots, is key to victory. The Dolphins lost the first game of this series last season due to an inability to kill the clock with the running game.

2. Energy level that the Dolphins play with

In their last trip to Buffalo, the Dolphins seemed uninspired and lethargic in a 19-0 loss in Week 16 of 2013. The team played with absolutely zero intensity.

Going to Buffalo and playing with the energy level that was present during the Dolphins season opening win would show the night-and-day difference between this team and the squad that came up just short of the playoffs last season.

3. How the Dolphins back-up linebackers play

The Dolphins will be without two of their starting linebackers against the Bills, and though Philip Wheeler is listed as probable it is unclear how much he will play with his thumb injury. Losing Koa Misi to an ankle injury is a huge blow as he is the Dolphins most physical linebacker and would is key to the Dolphins run defense.

The Dolphins will be relying on their back-up linebackers to play extraordinarily in their spot duty for the second week in a row. Jason Trusnik, Jelani Jenkins and Jonathan Freeny will be facing a physical Bills team that will run the ball and continue to run the ball for the entire game.

The trio will get worn down in this game, but their play cannot deteriorate if a long touchdown run late in the game is the be prevented.

Jason Trusnik is a strong run defender, but his ability to play in pass coverage doesn't fill me with confidence. Trusnik is an aggressive linebacker who will fill in for Misi nicely as a run defender in the middle of the defense.

Keep an eye on Jelani Jenkins. I'm a fan of Jenkins' coverage ability, but Jenkins has been a liability against the run in the past. Last year against the Bills, Jenkins was blocked 15 yards backwards on a screen pass on a successfully-converted long third down.

Jenkins played admirably against the Patriots in the opener and played faster and more aggressively than I had ever seen. It was a joy to watch, but the Bills will present a tougher challenge when running power straight at him.

It will also be interesting to see how much the Dolphins use Kelvin Sheppard. Sheppard describes himself as a physical linebacker, which is exactly what the Dolphins need this Sunday.

4. How the Dolphins use Chris McCain 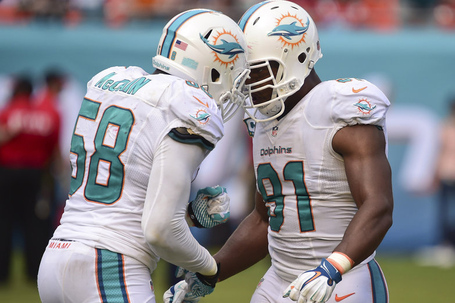 Chris McCain, who mainly played outside linebacker throughout the preseason, received all of his defensive snaps as a defensive end against the Patriots. McCain produced a sack on Tom Brady in his limited defensive snaps and blocked a punt on special teams.

Many are fans of this rookie, and many want to see him on the field more. But his snap count may have taken a serious hit with the return of Philip Wheeler from injury and Dion Jordan from suspension.

McCain's production on the field demands playing time, so he will likely receive some defensive snaps this week. It will be interesting to see where he plays though. Will he be tasked with hunting down Manuel as a defensive end or will he receive snaps at linebacker?

This game will likely be McCain's chance to impress at linebacker as Dion Jordan's return limits the playing time that McCain will get as a pass rusher.

5. Amount of mistakes the Dolphins make

This will be something to monitor as it will show us how good this team can really be. I believe that if Miami goes to Buffalo and makes the same mistakes that they made in the season opener (i.e. turnovers and dropped passes) then Buffalo will take advantage of these mistakes and hang around with this team (as they did against the Chicago Bears in their season opener).

If Miami does make these mistakes and still manages to win big, as they did against the Patriots, however, that would show just how good this team has potential to be. However, that sloppy play isn't sustainable and would have to be cleaned up eventually.

Charles Clay will be fun to watch in this game. The Bills will be without starting linebacker Keith Rivers in this game, and the Bills' linebackers aren't coverage specialists to begin with. Clay, who had a limited impact in the season opener, has been dealing with a lingering knee injury, but I don't expect it to affect him much this game.

Clay will take advantage of soft coverage in the middle of the field to produce big plays and key first downs.

The Bills are a matchup nightmare for the Dolphins, but I believe this Miami squad is so much different from the one that took the field last season in Buffalo.

Last year everyone underestimated the Bills following a loss to the Patriots, and the amount of worry shown throughout the week proves that fans don't plan on letting that happen again. However, the memories of 2013 may have caused some excess worry.

I believe that the Dolphins will handle the Bills with ease and that this team will pleasantly surprise us with a convincing win for the second Sunday in a row.