The MiamI Dolphins beat the New England Patriots last Sunday behind a strong running game. What led to the success and how can they duplicate it against the Buffalo Bills this weekend? We look at the film.

Miami Dolphins running back Knowshon Moreno ended Week 1 of the 2014 season as the NFL's leading rusher, having gashed the New England Patriots for 134 yards. This week, the Dolphins head to New York to face the Buffalo Bills. Will the team be able to continue their hot start on the ground? We take a look at the film against the Patriots to see how Moreno, as well as Lamar Miller, were able to find success.

Miami's first half looked like a team trying to adjust to a new offensive scheme, while shaking off the rush of the offseason. The second half, they looked like a team firing on all cylinders. For this look at the team's running game, I went to the third quarter, and pulled up every running play for Miami in their three drives during the quarter. That came out to 12 plays, one of which was erased because of a holding penalty. One thing quickly became clear going through all of the plays: Miami's offensive line came to play in the second half. 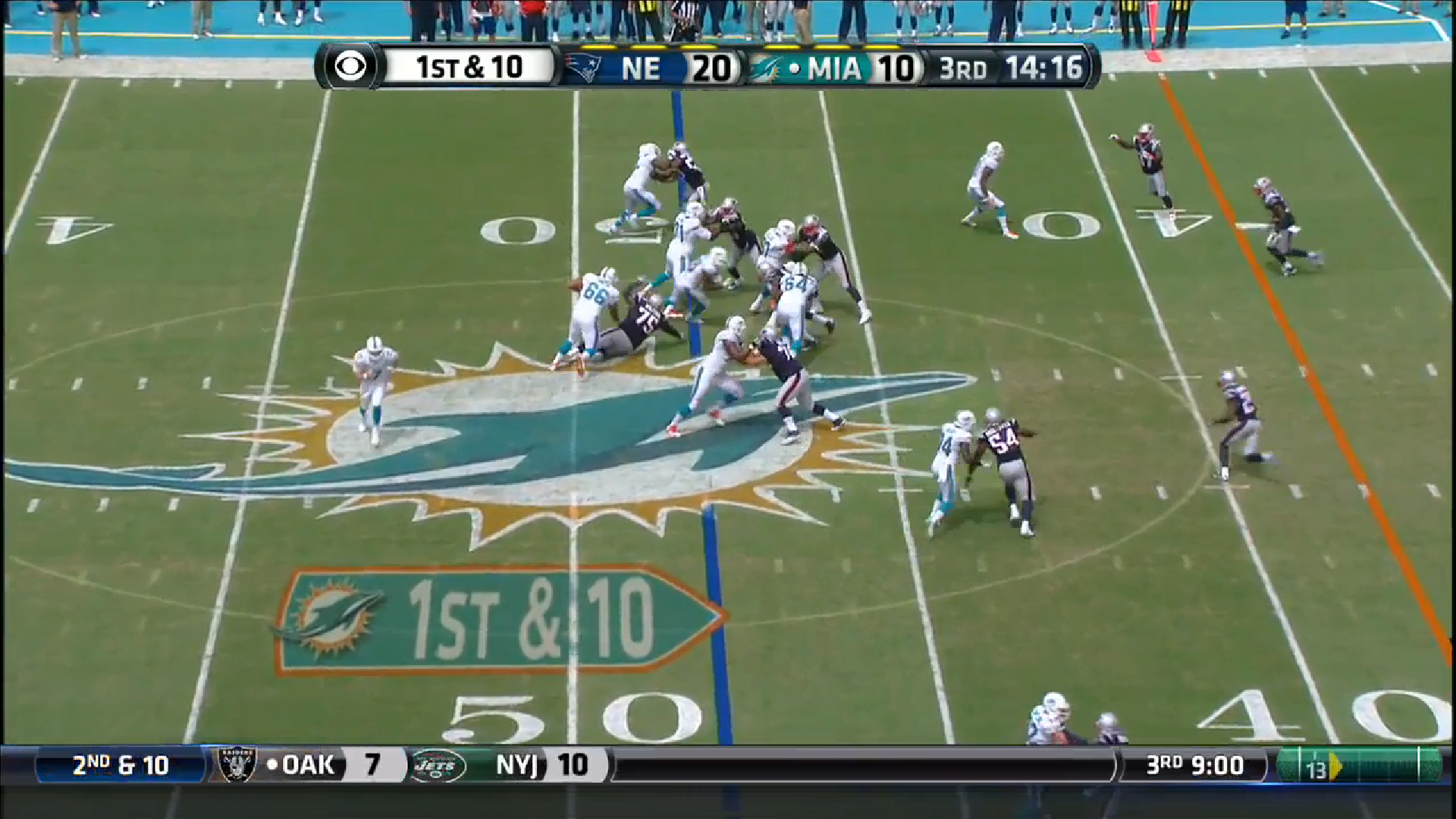 On the second play of the team's first possession, Miami handed the ball to Moreno, who ran off left tackle for three yards. Every Patriots player within eight yards of the line of scrimmage has a Dolphins player blocking him. Only the two safeties are left unblocked at this point, with Moreno and quarterback Ryan Tannehill the two Dolphins players not blocking someone. center Samson Satele and guard Daryn Colledge are both two yards down field, shoving Patriots linemen back - and this is one of the worst pushes in the 12 running plays. 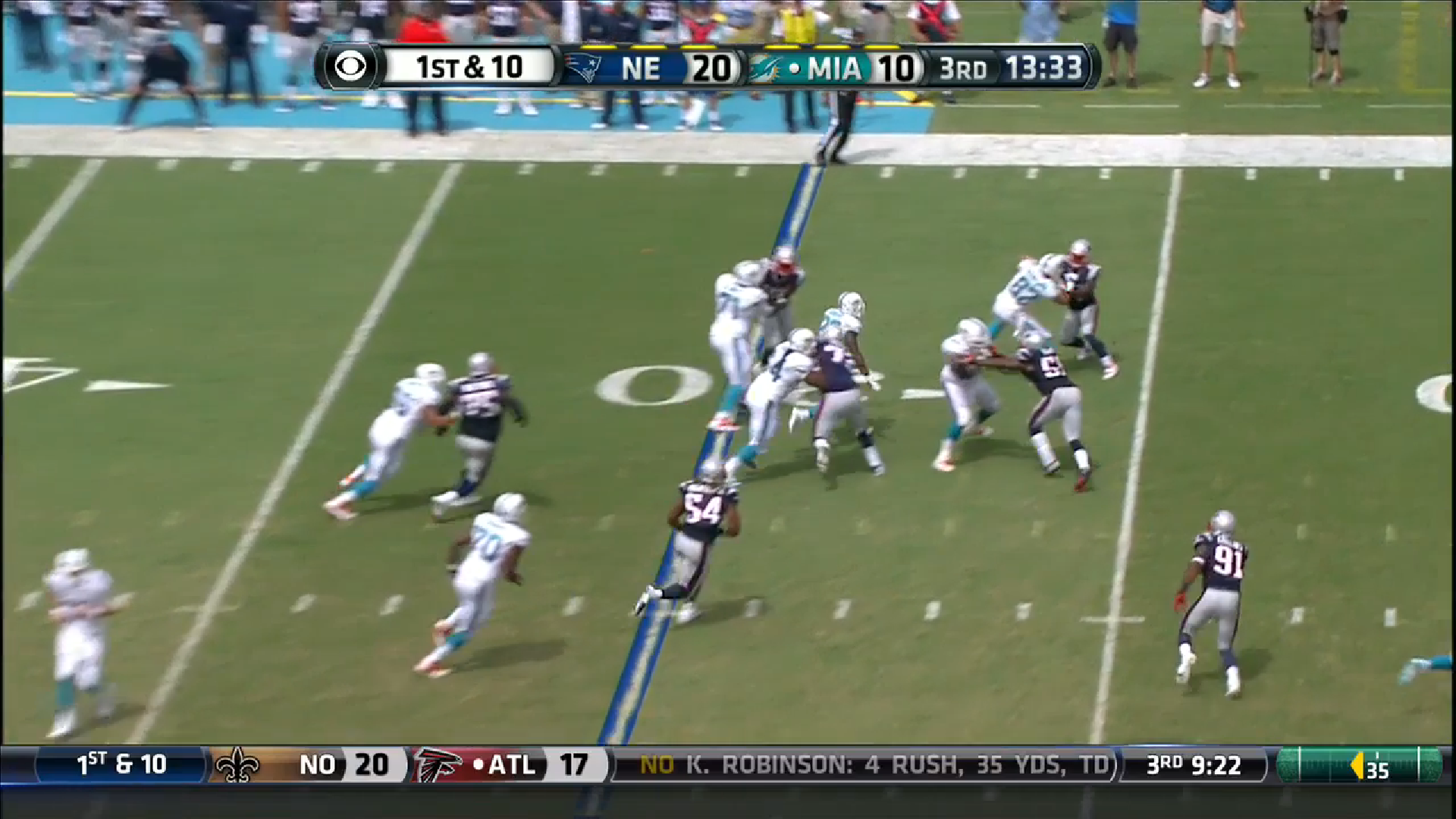 After a 24-yard pass to tight end Charles Clay, the team comes back to the Moreno left tackle run, this time picking up nine yards. Miami is again looking good with the blocking, getting a hat on every person who could make the play on Moreno. Leading the way out in front of Moreno is Colledge, who is three yards down the field blocking linebacker Jerod Mayo. Satele, tackle Branden Albert, and wide receiver Brian Hartline all are sealing off their respective blocks, which allows Moreno to pick up nine yards on the play. 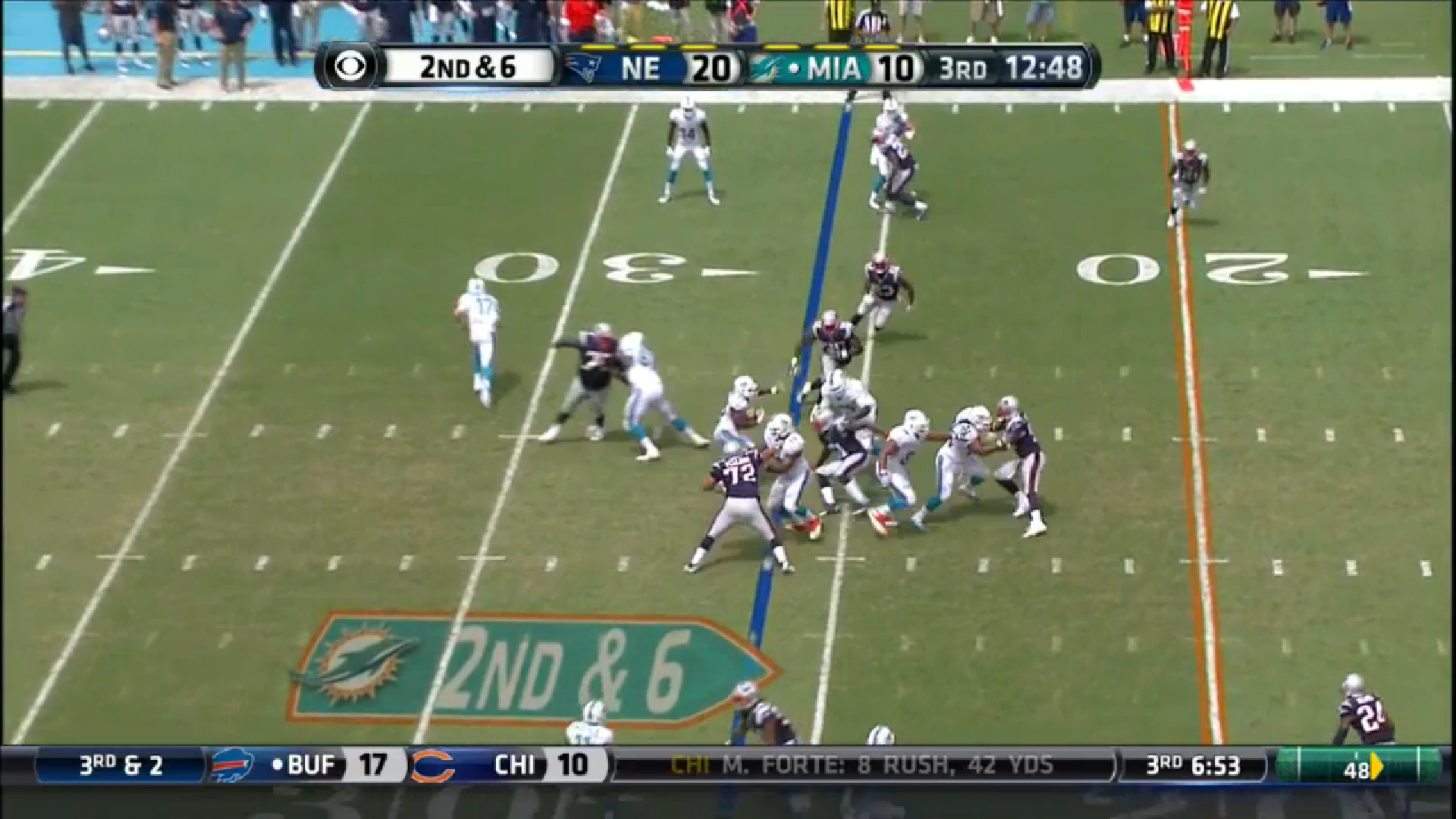 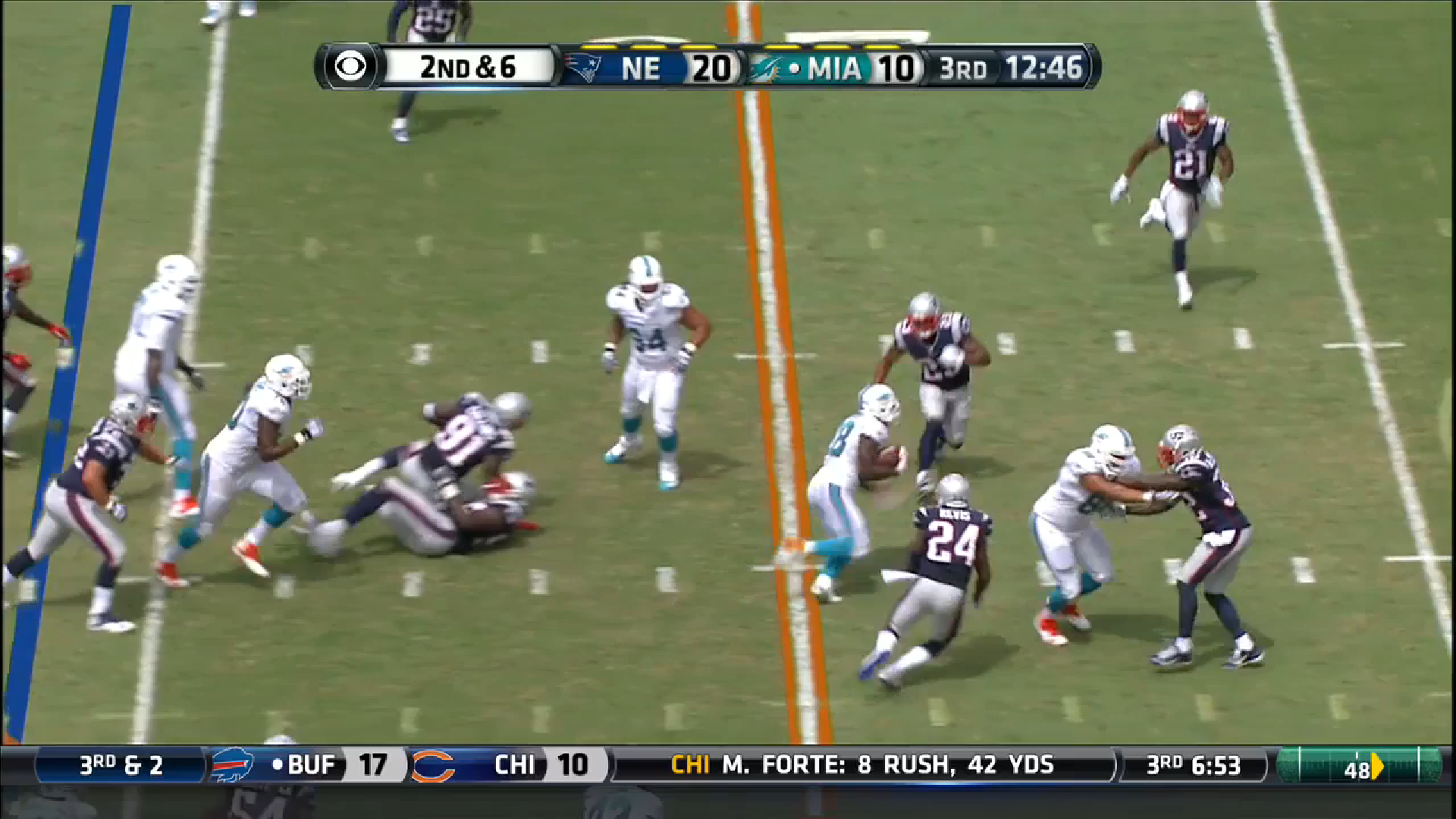 After a penalty, Miami came out on second down and again handed the ball to Miller, who picked up 13 yards on a run straight up the middle of the Patriots' defense. Once again, the offensive line pushed the Patriots off the line of scrimmage, opening a lane for Moreno. Satele is again three yards down the field, with guard Shelley Smith directly behind him. In the second screen-shot of the play, Smith has now engaged, eight yards down the field, continuing to clear the way for Moreno. 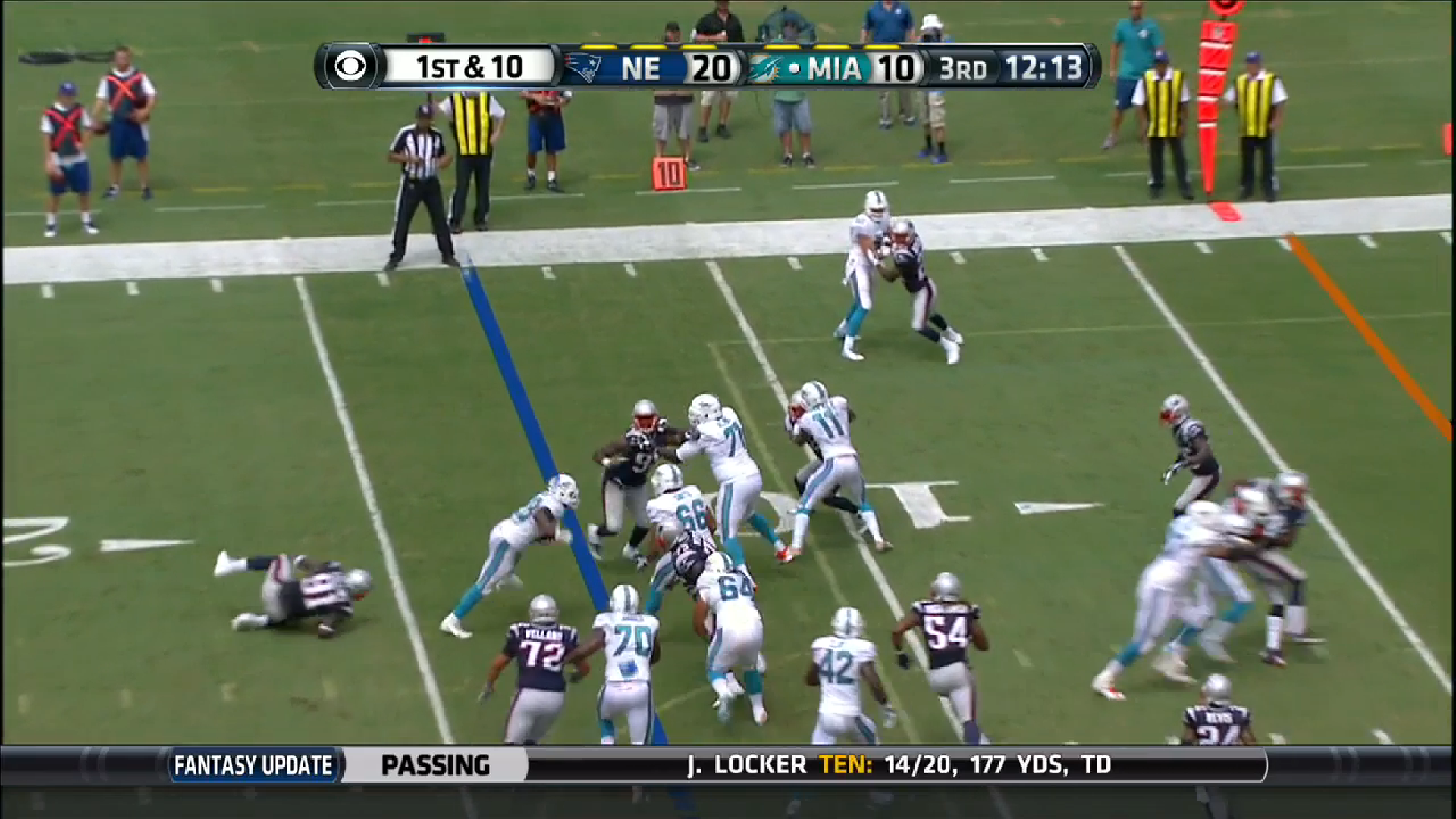 Moreno ran off left tackle on first down, picking up four yards. The rushing land was not as well sealed here as some of the earlier, longer runs, but the offensive line is still sealing off defenders and getting down field to try to get helmets-on-helmets. Miami would try two passes on the next two plays, both incomplete, before settling for a field goal. 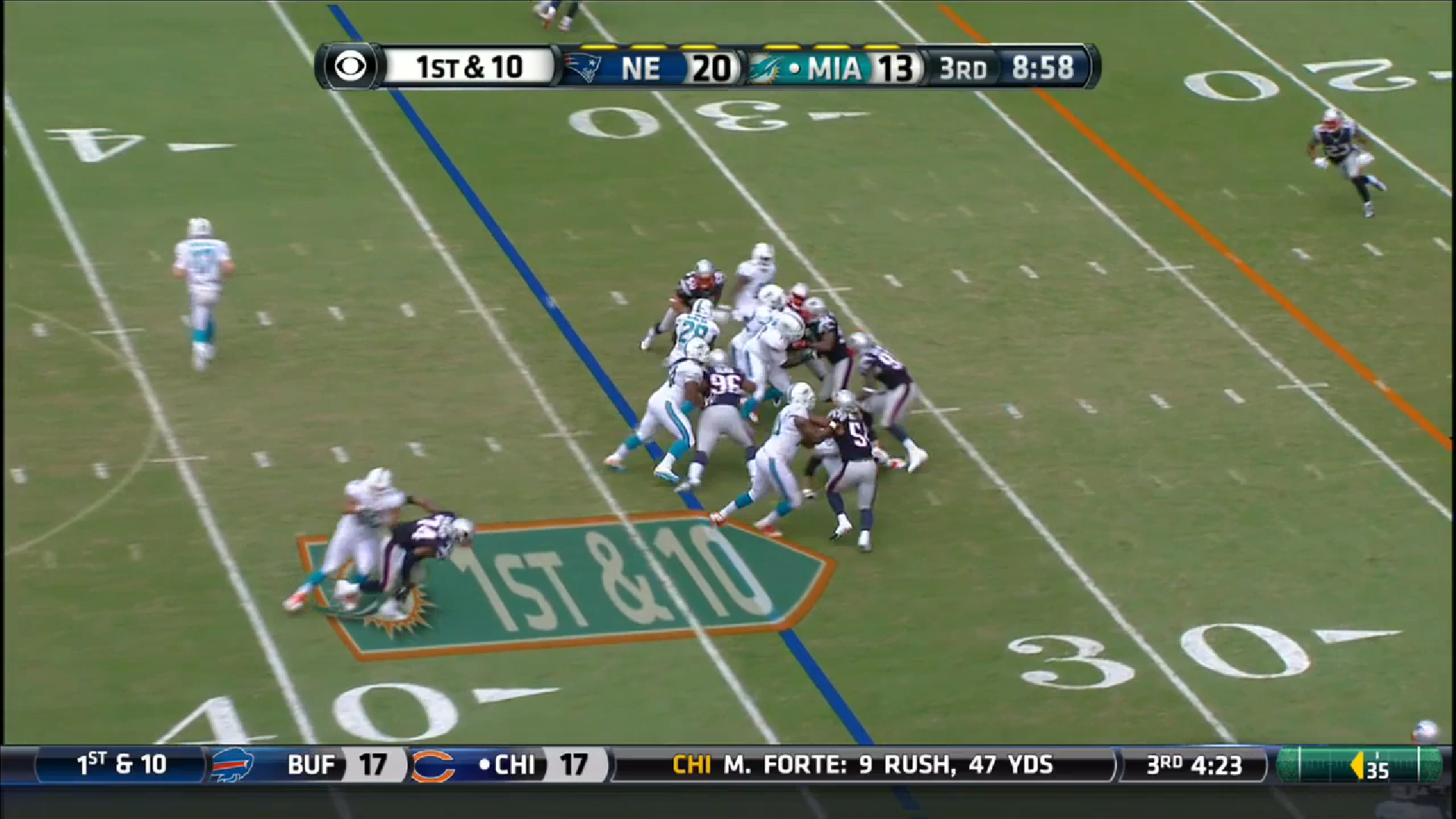 The next drive started with a Moreno left guard run, picking up eight yards. The entire Miami offensive line simply manhandled the Patriots defense three yards off the line of scrimmage, with Miller running with some power to pick up the extra yards after contact. 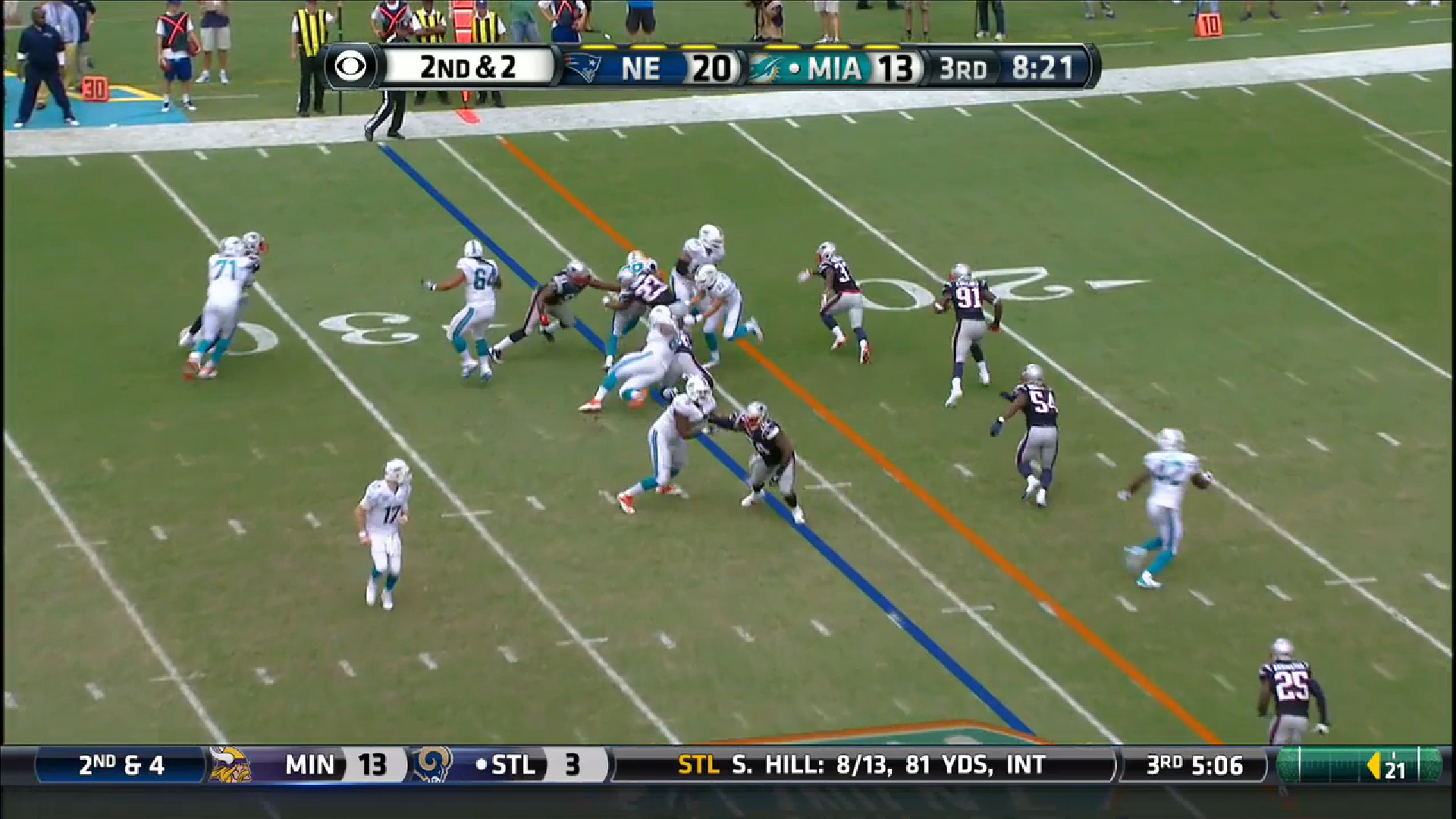 At this point, the Dolphins seem to realize the offensive line is simply crushing anyone and everyone in front of them and starts letting Moreno do what he does best - run. On second down, they feed him the ball again, picking up five yards. The blocking is not as solid on this play, but there is something a little odd about this play as well. Wide receivers Mike Wallace and Brandon Gisbon, who are just off screen at the bottom of the image, and tight end Charles Clay all seem to be running true pass routes. Brian Hartline, who started at the top of the screen, and is in the middle of the field in the screen shot, immediately began blocking at the snap. Some of the offensive linemen appear to be pass blocking, which makes it possible that this was a read-option play, with a run to the left and a pass to the right as the options for Tannehill. The decision to run leads to a first down, so it appears, if this was an option play, Tannehill made the right read. 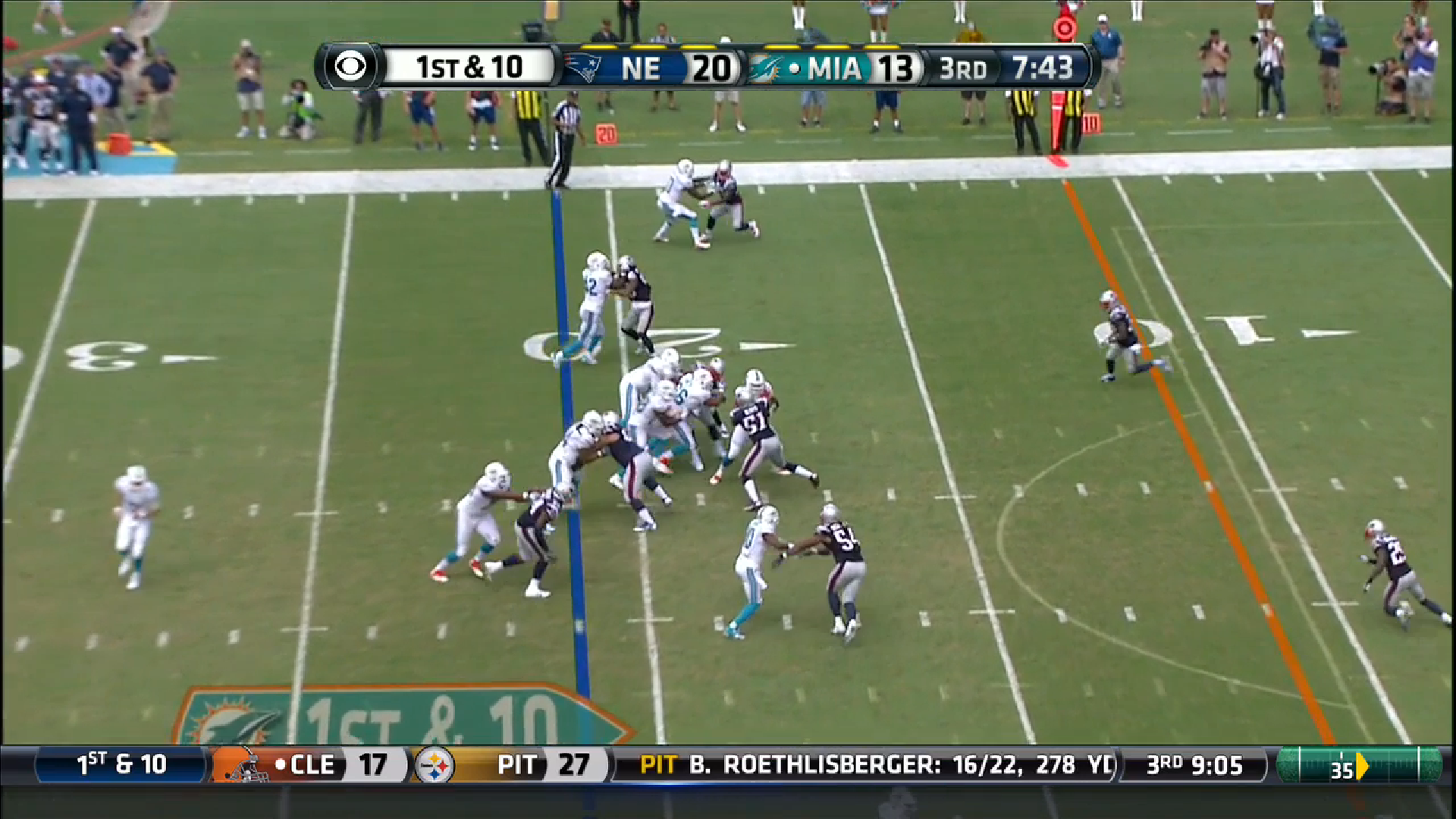 The Dolphins run the ball again on the next play, and again the offensive line is pushing the Patriots defense back. Shelley Smith pulled on the play, a left tackle run, and is now two yards up field, engaging just in front of Moreno. A yard further up the field, Colledge is sealing off Mayo from the play. Moreno would pick up seven yards on the run, setting up the next play, a 14-yard touchdown pass from Tannehill to Wallace. 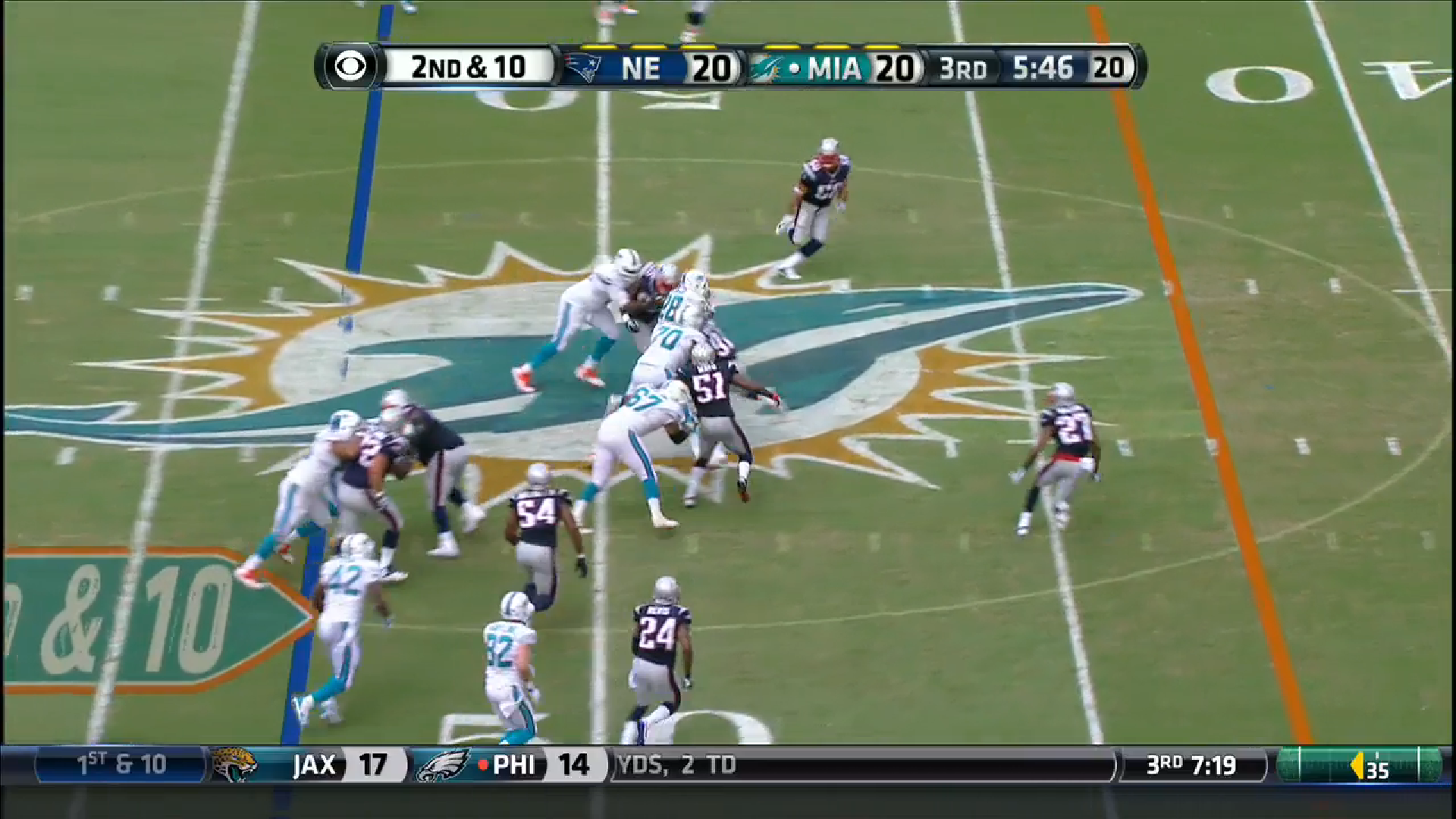 Miami starts their third possession of the quarter with an incomplete pass. On second down, they return to Moreno gaining chunks of yards on the ground, again running to the left. As Moreno busts through the second level, Colledge, tackle Ja'Wuan James, and tackle Branden Albert are all with him four yards down field. Moreno gains 13 yards on the play. 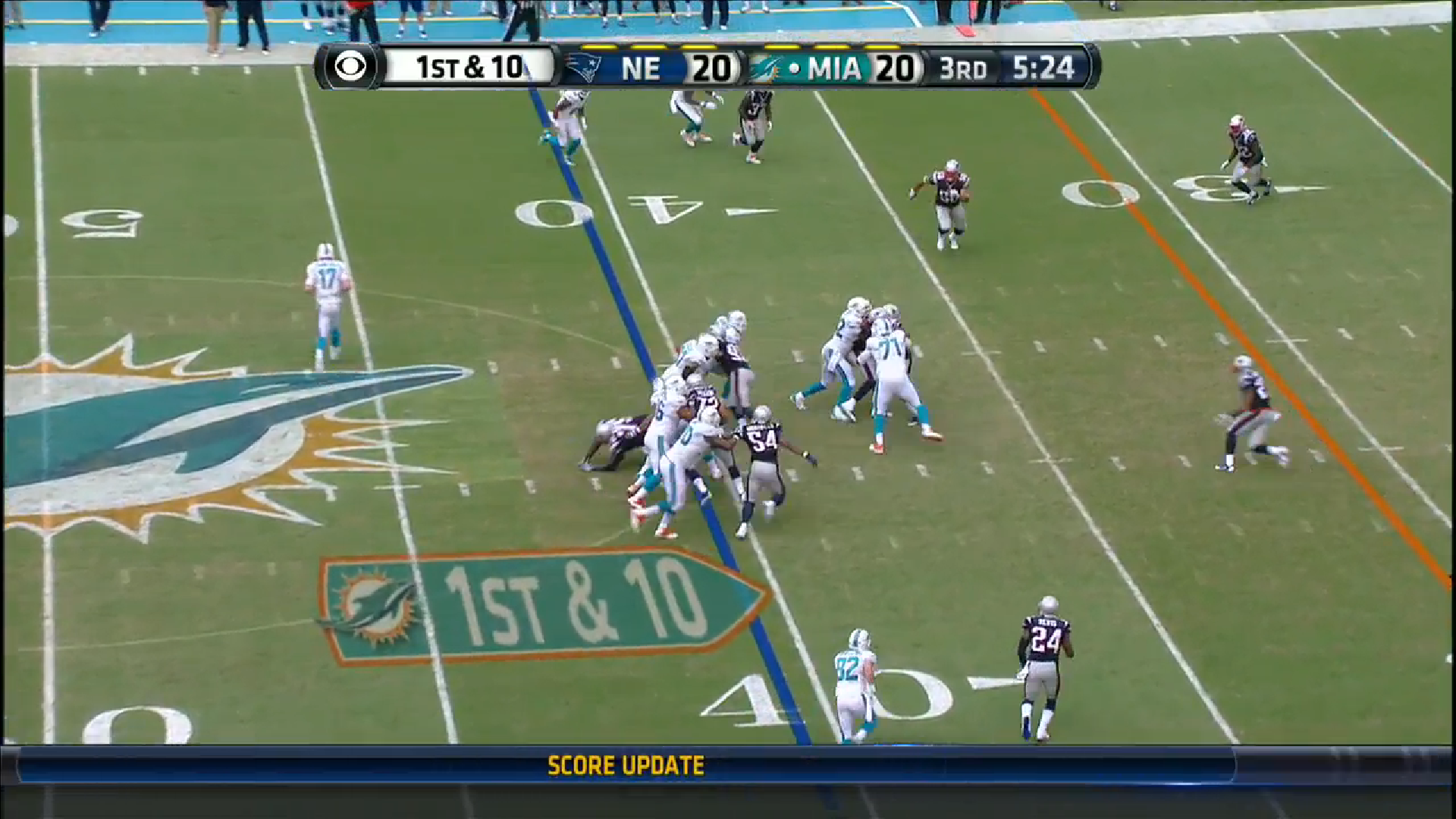 Miami again gives Moreno the ball on the next play, and he again finds an open lane in front of him. And, as has become the norm at this point in the third quarter, there are offensive linemen some four yards down field, in this case Albert who is blocking one player into a player being blocked by Clay, engaging defenders and giving Moreno an opportunity to continue to wear down the Patriots. On this play, he picks up six yards and again gets Miami ahead of the chains. By the end of the run, four of the five offensive linemen have made their way down field, and even with Moreno, trying to continue blocking. 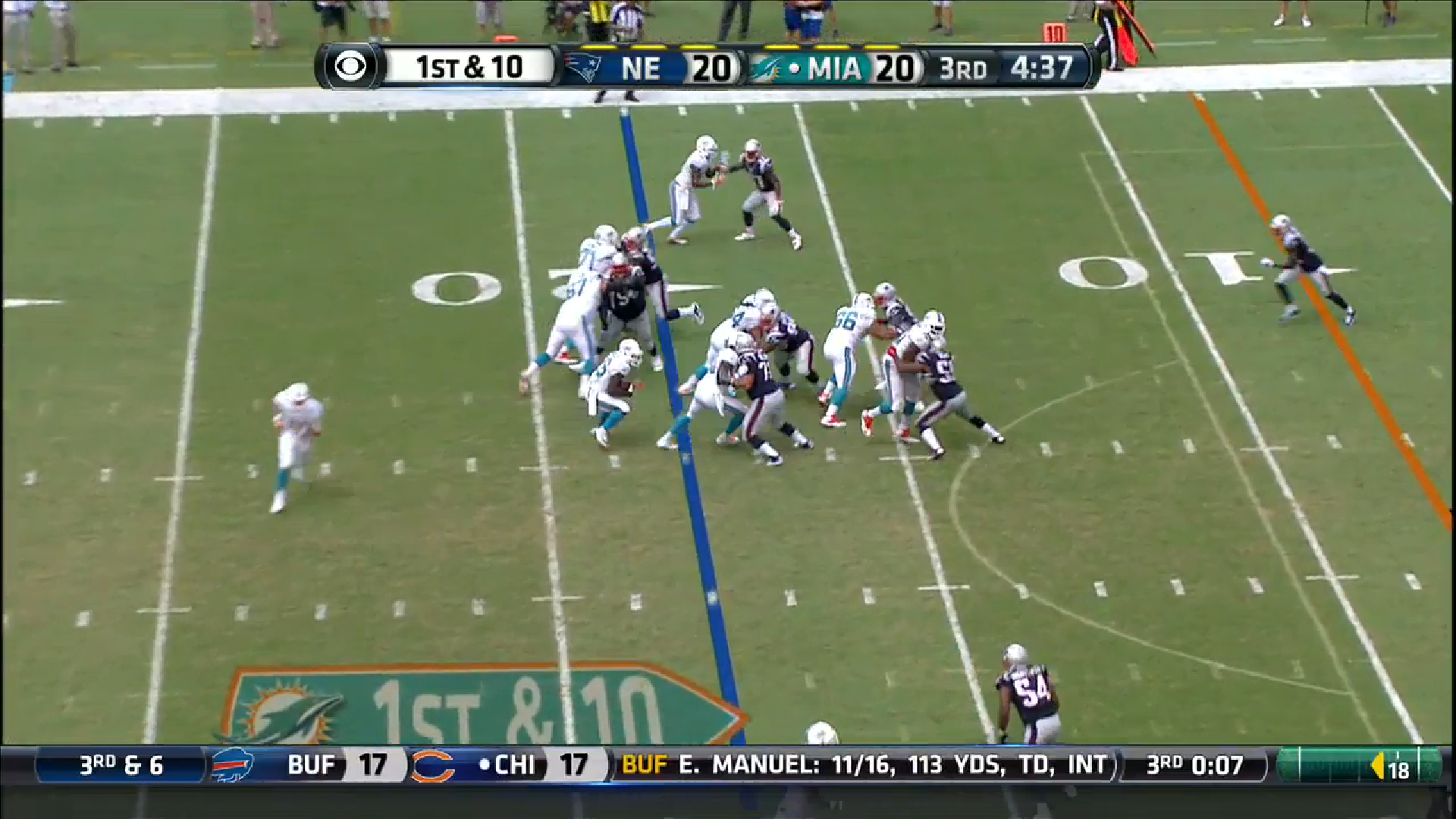 After an incomplete pass, then a 16-yard gain on a pass from Tannehill to Wallace, Miami turns to Lamar Miller for a few plays. With the way the offensive line is blocking, Miller is able to keep the momentum from Moreno's success. The offensive line is again shoving people back, and is able to open up multiple running lanes. The play looks as though it's designed to go left, with a nice hole opening there, but Miller cuts back to the right, there there is absolutely no one. Miller picked up 13 yards on the run, setting up a 1st and goal from the Patriots five yard line. 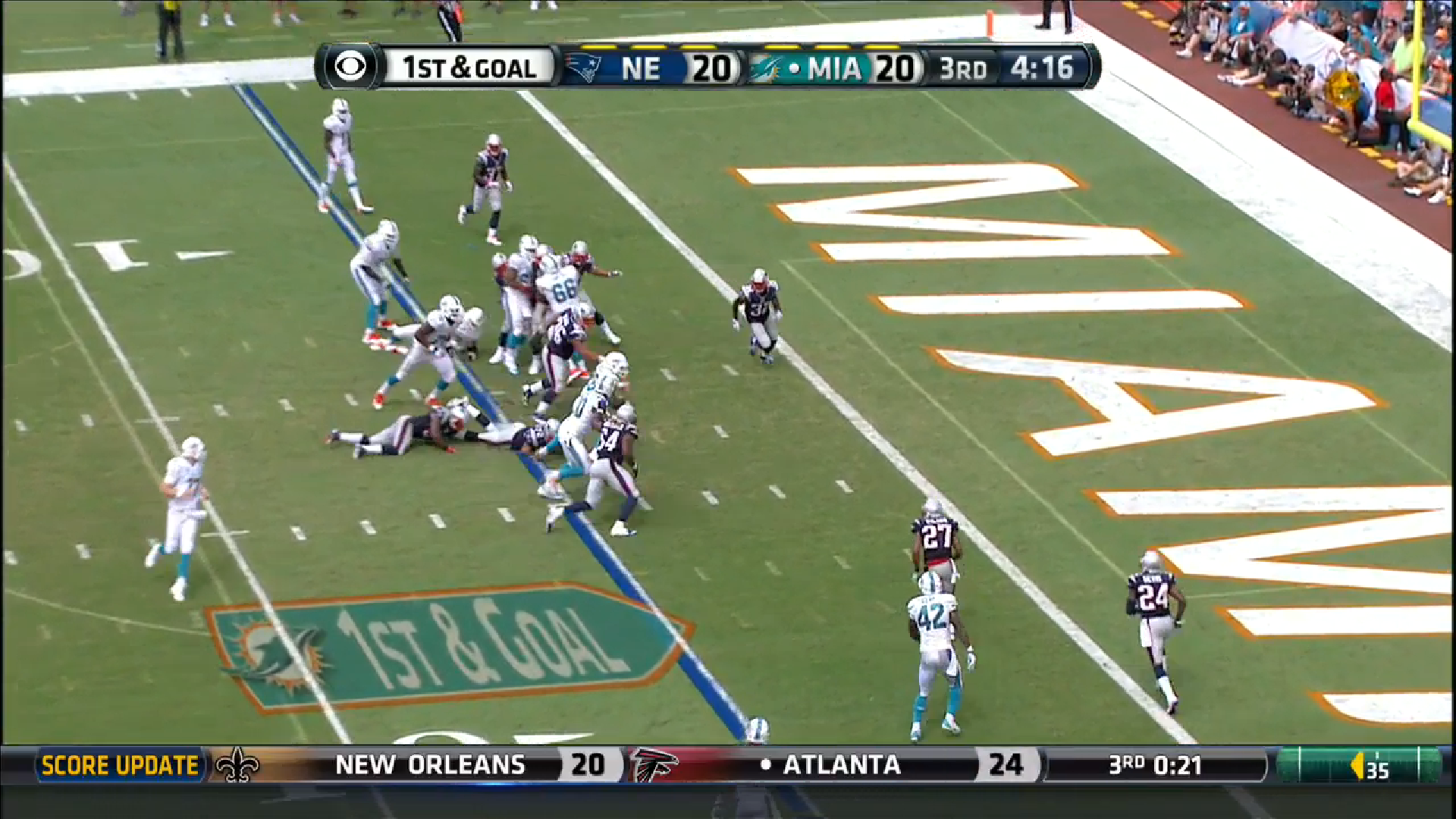 This play ends up not counting, because James is called for holding, but the image above clearly defines Miami's ability to open running lanes throughout the second half. There are Patriots strewn all over the line of scrimmage, there are white jerseys everywhere, and there is nothing but green in front of Miller. The running back would find the endzone, though the James penalty moves the team back to the 20-yard line for the next play. 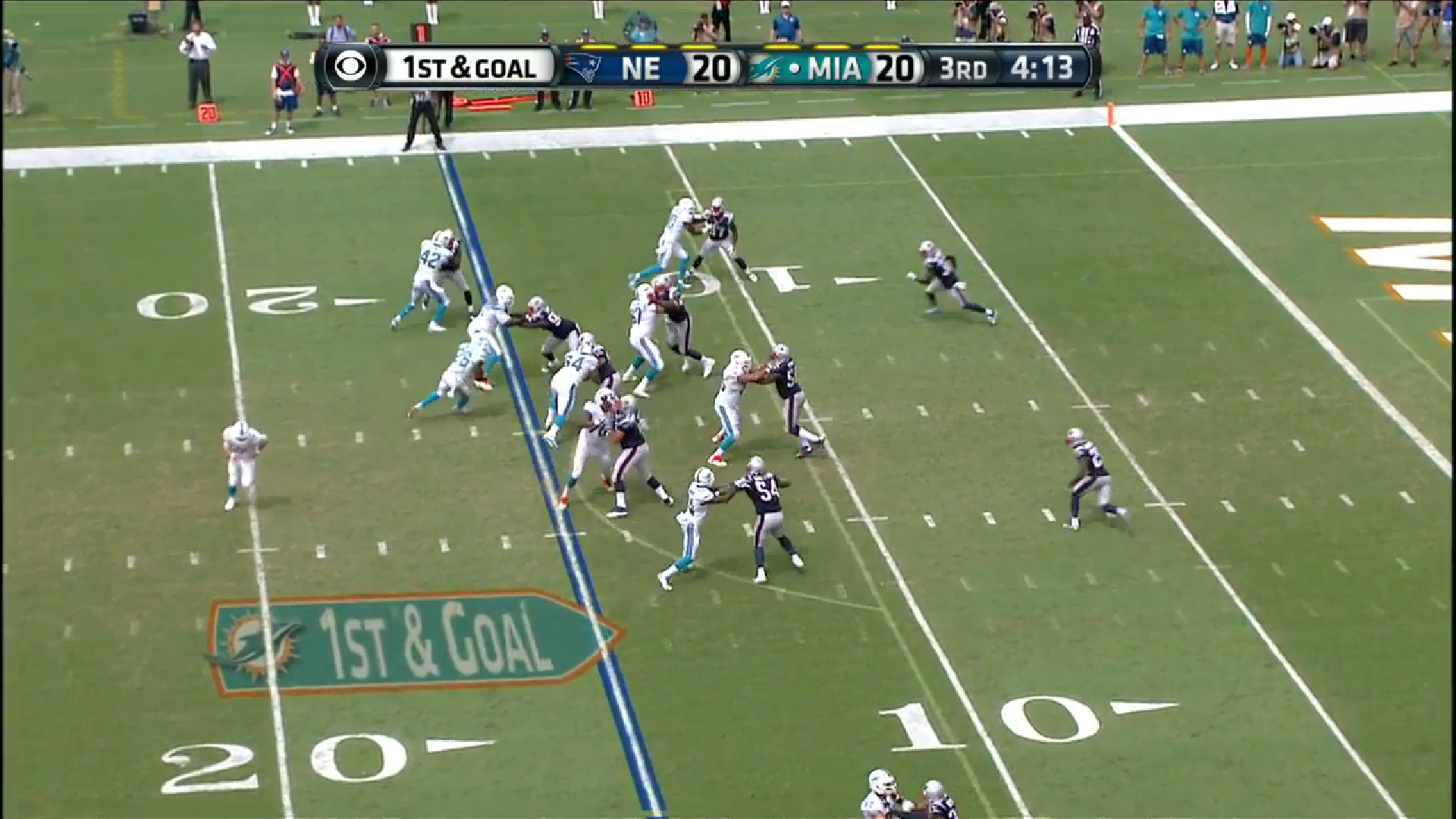 Miller is back on the re-played down, and is again given the ball. As you would expect, the offensive line is doing what they have done throughout the quarter, getting people off the line of scrimmage and getting to the second level to block. Every lineman has his player at least a yard back off the line of scrimmage, with both Colledge and Smith down field blocking the linebackers. The wide receivers are all locked into blocks as well, with just the two safeties not actively engaged by a Dolphins blocker. Miller picks up five yards on the run, with the Dolphins throwing on the next play, a completion to Miller who gets to the three-yard line. On third and goal, Miami tries to pass, with Tannehill looking for Clay but the pass falling incomplete, and Miami adding another field goal

It is only one game, but it was nice to see the Dolphins find a running game, and find it against a team expected to be the Division champion (again) and potentially make a deep run in the playoffs. The offensive line was a huge part of why Moreno and Miller had success, though there were a few plays where Moreno was hit in the backfield, and somehow willed his way to positive yardage. If the offensive line can continue to play like this, especially when Mike Pouncey gets healthy and re-joins the line, Miami should be able to run the ball effectively all year. They may not reach 191 yards rushing each week, like they did against the Patriots, but they should be able to do enough to at least keep defenses honest, something they clearly did not do last year.