Looking Ahead: Miami Dolphins Biggest Issue vs the Buffalo Bills

What will be the biggest issue for the Dolphins when the team travels North to play the 1-0 Bills?

Share All sharing options for: Looking Ahead: Miami Dolphins Biggest Issue vs the Buffalo Bills

The Miami Dolphins will be traveling to Buffalo this weekend after a conclusive 33-20 victory over the now-last place New England Patriots last Sunday in Sun Life Stadium.

The Dolphins are riding a wave of momentum and confidence, but the team has one glaring deficiency right now that may cause Sunday to be a tougher match-up than anticipated...

Throughout the preseason and training camp, we debated which area of the team was the most troublesome. For some (including myself), it was the run game as a whole. For others, it was the linebacking unit.

While both of these areas performed well in the season opener, the linebacking corps was thinned significantly. By the end of the game, all three of the Dolphins starting LBs were sidelined with injury.

Koa Misi has an ankle injury that currently has him in a walking boot and Philip Wheeler has a cast on his thumb that prohibited him from playing in the opener. The status of both heading into Sunday is uncertain. Dannell Ellerbe is out for the season with a hip injury.

Back-up linebackers Jelani Jenkins, Jason Trusnik and Jonathan Freeny played admirably against the Patriots (which left some questioning the performance of the starters), but a more physical test is on the horizon.

The Buffalo Bills offensive line paved the way for 193 rushing yards in their season opening win over the Chicago Bears. The Bills' gameplan will centralized around running the ball (33 attempts last Sunday) and will utilize their running backs on screen passes.

Trusnik, Jenkins and either Freeny, newly signed Kelvin Sheppard or Koa Misi (if healthy) will start Sunday at linebacker. This makes the LB corps the band aid of the defense and the area to attack for the Bills.

Luckily, the defensive line is the strongest unit on the Dolphins team. This should create a enticing trench battle up front when the Bills run the ball.

However, if the defensive line isn't dominating the offensive line, the linebackers have to play more instinctively. Miami's linebackers will need to find and react to the ball promptly as to not find themselves out of place and getting gashed by the Bills' talented stable of running backs.

Tackling will be a huge key this week. 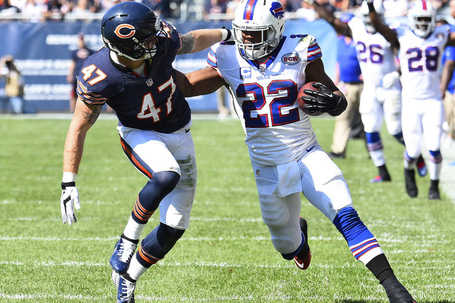 The Bills have Fred Jackson and CJ Spiller at running back, and both are very tough to tackle for different reasons. Spiller is lightning quick and fast while Jackson is an absolute tank with the ball in his hands (as evidenced by the nasty stiff-arm pictured above). The Dolphins cannot afford any missed tackles this week as it will almost undoubtedly equate to a chunk yardage for the Bills.

Miami also needs to be ready for screens. The Bills have decimated the Dolphins defense with screen passes to running backs in the past, including last season when the Bills swept the season series over the Dolphins.

The Dolphins defensive line is very good at snuffing out screens, but the Bills will still find success in the screen game if the linebackers aren't in place. The Dolphins LBs need to watch for screens on third-and-long as the Bills converted third-and-10-plus far too many times with screens to RBs in 2013.

How the Dolphins decide to use Jenkins in this game will be very interesting. One of Jenkins main problems since entering the NFL last year is a lack of physicality. Jenkins is one of the Dolphins' smallest linebackers and has struggled with disengaging from blocks.

The Bills have a multi-faceted offense that can attack a defense in many different ways. However, when Jenkins is in the game (depending on down-distance and the overall game scenario) expect to see power running plays come directly his way to take advantage of his deficiencies.

However, Jenkins ability to play coverage will be key. The Bills' running backs combined for six receptions last week, and Jenkins will be used to counteract that.

Trusnik, who will either start at middle linebacker or strongside linebacker depending on the health of Misi, is very much the opposite of Jenkins. Trusnik is a powerful run defender but struggles in pass coverage.

Trusnik will be significant in the run game, but will make a few mistakes in coverage and will struggle to cover a zone.

The Dolphins defense is susceptible to passes over the middle of the field, and the Bills have the personnel to take advantage of it. Look for drag routes to receivers across the middle and plenty of passes to tight end Scott Chandler.

Overall, the Dolphins defense is coming off of a performance where they allowed just 20 points, but they will be facing a more talented offense this week (with a less talented QB). The patchwork linebacking corps will almost undoubtedly be the target of Bills' offensive coordinator Nathaniel Hackett's gameplan.

It will be very interesting to see if the Dolphins linebacking corps can stand strong for a second straight week against a tougher overall offense.