Quick Thoughts on the Miami Dolphins Roster Trim to 75

Some quick thoughts on the pieces of the Miami Dolphins 53-man roster puzzle that were revealed when the Dolphins shaved their roster to 75 players on Tuesday afternoon.

Share All sharing options for: Quick Thoughts on the Miami Dolphins Roster Trim to 75

Today the Miami Dolphins, and the rest of the NFL, trimmed their roster to 75 players. The transactions that took place can be seen in the picture below. 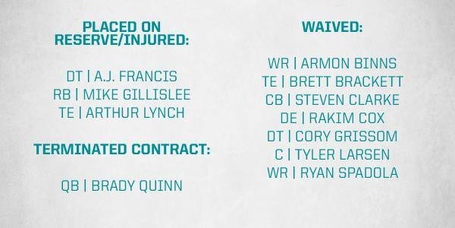 Photo courtesy of the Miami Dolphins

This recent round of cuts gives us a few more pieces to the overall puzzle that is the final 53-man roster. Keep in mind that a player on the Reserve/Injured list doesn't count against the roster.

I will have my final 53-man roster prediction out either tomorrow morning or after the final preseason game this Thursday.

Here are my thoughts on the moves made Tuesday afternoon.

AJ Francis on the Injured/Reserve list means a young DT, most likely Anthony Johnson, is safe

AJ Francis was put on IR to terminate a tough decision from the plans down the road. Before an injury kept Francis on the sidelines, he was widely viewed as the fourth best DT on the Dolphins roster.

The Dolphins were facing the decision of keeping a young developing DT or wait on Francis to heal from his injury. IR is the perfect way to dodge this decision and keep both Francis and Anthony Johnson or Kamal Johnson (who plays the same position as Francis, 1-technique nose tackle).

Now that an extra spot has opened up along the defensive line, it'll be interesting to see which DT takes advantage of the final opportunity at a roster spot on Thursday night.

Gillislee's injury, and the subsequent decision to place him on IR, is similar to Francis's in that it deflects a decision from being made down the road.

Gillislee, a 2013 fifth round pick, was having a good camp before a leg injury threw a wrench into his plans and roster status. To make things worse, Gillislee was facing fierce competition from undrafted rookies Damien Williams and Orleans Darkwa.

To store Gillislee's talent, without the risk of losing him to another team that the practice squad presents, the Dolphins elected to put him on IR.

This means that Williams is likely safe on the 53-man roster and that Darkwa could also make it with a strong showing against the Rams.

It also means that...

Daniel Thomas will have an one last opportunity to impress Thursday

Gillislee out of the picture means that Thomas will be competing with only Darkwa for a roster spot (if the Dolphins decide to keep four running backs and don't claim anyone off the waiver wire).

Thomas, who had a solid practice today, could make the team if he runs strong and proves himself to be a solid option as a power-back (a bill that Thomas has failed to live up to in his time in Miami).

Gator Hoskins and Kyle Miller have an opportunity to take the 3rd TE spot (if they don't take advantage, Miami will likely claim someone on the waiver wire)

After Arthur Lynch was put on IR and Brett Brackett was cut, Hoskins and Miller are the only options left behind Charles Clay and Dion Sims. If the Dolphins keep four tight ends, both of them could be safe.

It's also likely that the Dolphins will claim a tight end off the waiver wire at some point to add to this competition.

However, as it stands now, the Dolphins will head into the final preseason game with Hoskins and Miller in a battle for the third tight end spot. My horse in this race is Hoskins, but don't count Miller out.

Binns is a talented receiver who can help a lot of teams. Binns was a touchdown machine in the Dolphins' 2013 training camp, but the depth at the receiver position forced the Dolphins' decision-makers to cut Binns loose.

This early cut allows Binns to become one of the most desirable players currently on the market and gives him an early chance to impress his new team before the next round of cuts.

Larsen was an undrafted rookie who I thought would have an opportunity to carve a niche with this team, especially in wake of the Mike Pouncey injury. However, Larsen failed to impress and has found himself looking for a new team.

The releasing of Binns provided clarity at the back-end of the wide receiver group. The Dolphins sixth receiver spot (if they decide to keep six) comes down to Damian Williams versus Kevin Cone.

Williams is clearly the better receiver and has added value as a returner, but Cone is a big, strong receiver who can win jump balls and is a very solid special teams player.

The decision will be a tough one. The more popular answer to who will earn the spot is Williams, but don't count Cone out. We'll soon see if the Dolphins coaching staff values offensive skills or special teams contribution from the final receiver spot.