The Miami Dolphins hosted the Dallas Cowboys tonight, coming away with the 25-20 win.

The Miami Dolphins and Dallas Cowboys faced off in the key third week of the NFL Preseason tonight, in the Dolphins' first home game of the year. Miami, thanks to solid play from the second team offense, was able to come away with a 25-20 win.

The Dolphins kicked off to the Cowboys top open the game, giving Tony Romo and the Dallas offense the ball first. They managed to gain one first down, but stalled out after an incomplete pass on their second third down. The MIami offense immediately began moving the ball back down the field, working both the running game and the passing attack.

The first possession for Miami featured the return of tight end Charles Clay, and running back Knowshon Moreno, who carried the ball three times for 21 yards. The Dolphins would ultimately drive the ball down to the Cowboys eight yard line before stalling and settling for a 26-yard field goal from John Potter.

With the 3-0 lead, the Dolphins kicked off to the Cowboys, who returned the ball 49-yards to near midfield. It was punter Brandon Fields, however, who kicked the ball for Miami as Potter, who is the second kicker on the roster for Miami with starter Caleb Sturgis nursing a groin injury, headed into the locker room. It was later disclosed that Potter injured his hip on the kick. 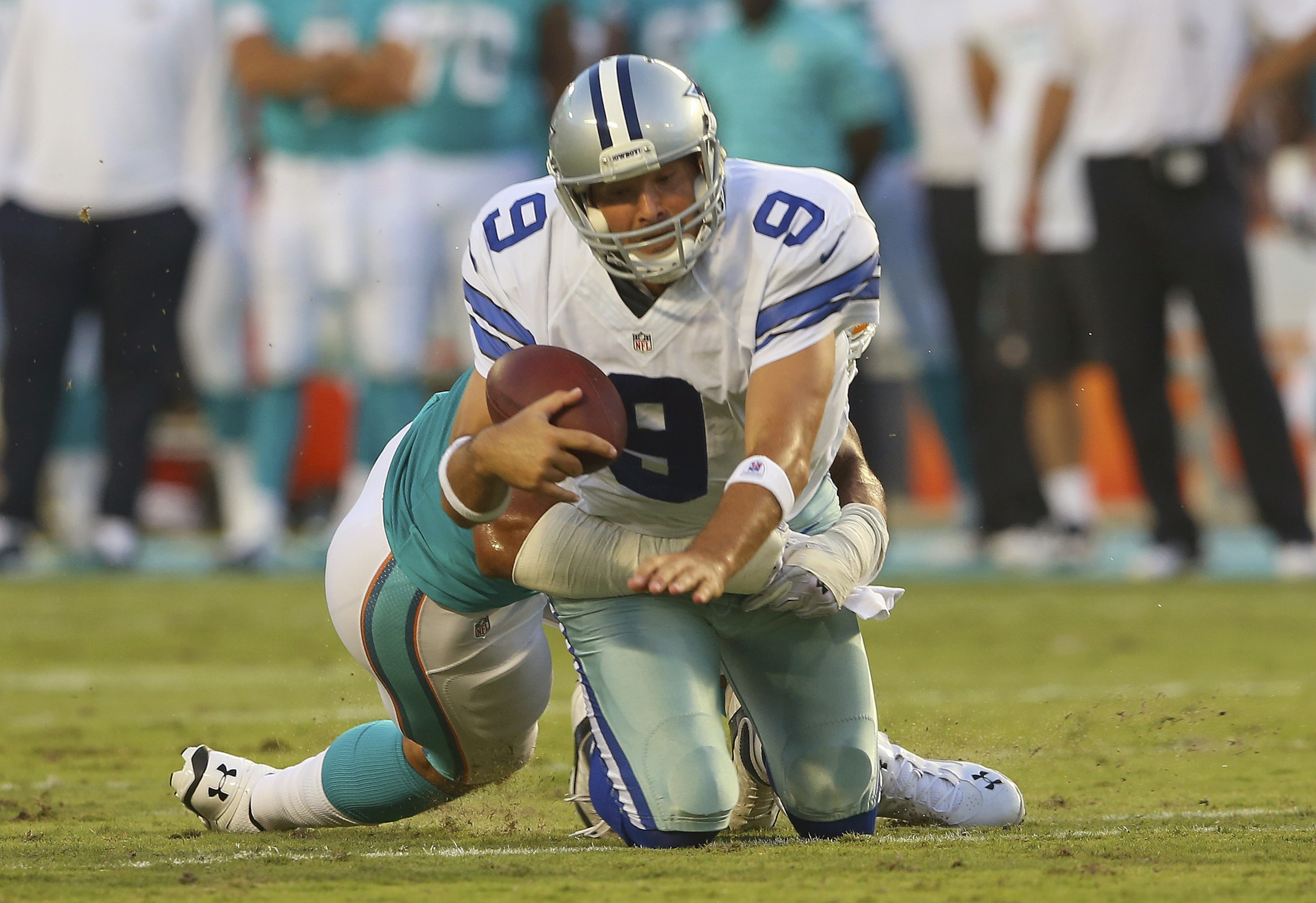 Tony Romo #9 of the Dallas Cowboys is sacked in the first quarter by Olivier Vernon #50 of the Miami Dolphins during a preseason game at Sun Life Stadium on August 23, 2014 in Miami Gardens, Florida. (Photo by Mike Ehrmann/Getty Images)

The Cowboys were able to move the ball down into Miami territory on the ensuing drive, but only to the Miami 34. They were able to convert on a fourth-and-four play, with Romo hitting Dez Bryant on a slant for the conversion, but could not carry the momentum any further. On the next third down, Miami came away with the sack, with Olivier Vernon cleaning up after Philip Wheeler made the initial contact but could not finish the tackle. Dan Bailey tied the game at three with a 52-yard field conversion.

The Miami Dolphins opened the second quarter against the Dallas Cowboys with the ball in hand. Five plays into a drive, the team resumed their methodical movement down the field. On the eighth play, however, tight end Dion Sims fumbled after making a catch and trying to turn up field. The ball bounced to Knowshon Moreno, who tried to fall on it, only to have it roll out from under him and to Barry Church, who recovered for the Cowboys.

The Cowboys would be unable to capitalize on the turnover, however, going three-and-out. The highlight of the possession was a Miami sack, with Cameron Wake pulling down Tony Romo behind the line on third-down, giving Dallas a negative seven yard drive.

The game then turned into a three-and-out fest, as the Dolphins would match Dallas, punting the ball away after just three yards gained.

The Dolphins nearly went three-and-out a couple of drives later, but a penalty on the punt gave Miami new life. They were luck the Cowboys were called for lining up over long snapper John Denney, as the punt was blocked by Bruce Carter, appearing to give Dallas the ball on the Miami three-yard line.

With the new set of down, the Dolphins found their rhythm, both through the air and on the ground. Moreno resumed picking up large chunks of yardage, spinning and jumping to move the ball forward. Brian Hartline got back into the game after allowing a ball go straight through his hands a few plays earlier, gaining 16-yards on a reception across the middle. 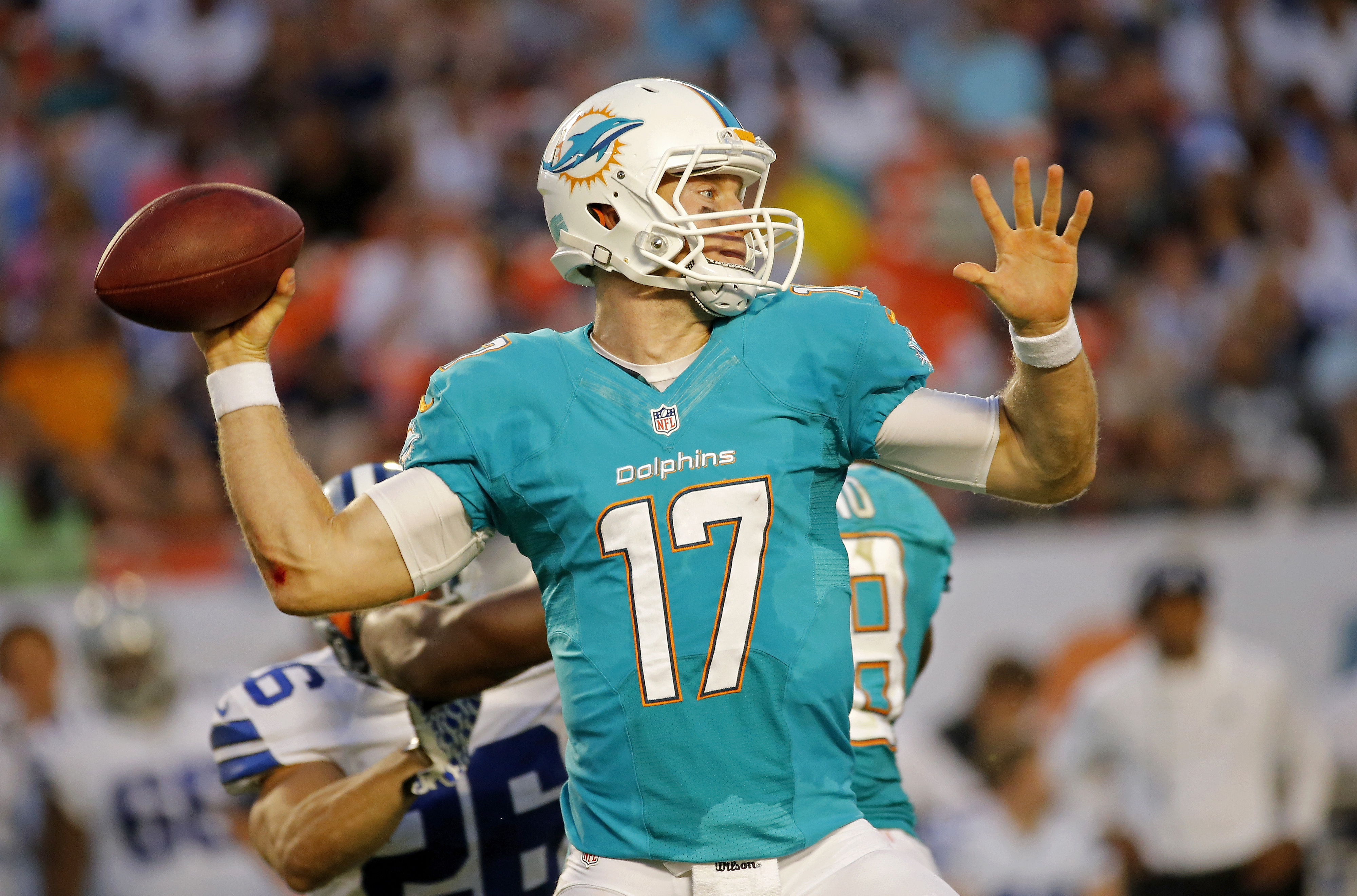 Ryan Tannehill #17 of the Miami Dolphins throws against the Dallas Cowboys in the second quarter during a preseason game at Sun Life Stadium on August 23, 2014 in Miami Gardens, Florida. (Photo by Rob Foldy/Getty Images)

Miami nearly had a touchdown on the drive, when Tannehill took a deep shot to Mike Wallace down the sideline. Wallace, however, could not find the ball in the air, and stumbled as he tried to correct once he did find it. Ultimately, the Dolphins would have to punt.

Dallas was able to put together a drive deep into Miami territory on their final possession of the half, until a couple of illegal shift penalties and Cameron Wake's second sack of the game dropped them back. They were able to cap the 12 play, 48-yard drive with a Dan Bailey 50-yard field goal.

Miami got the ball to start the second half, with Tannehill and the first team offense taking the field. The team was able to move the ball down field effectively, including strong running from Damien Williams. The drive, however, would end with a horrible decision from Tannehill, as he tried to throw the ball into double coverage on Hartline, only to throw it directly to cornerback D.J. Adams.

The Dolphins would pull their starters after that play, with the second team defense coming on the field for the Cowboys' possession. Second string quarterback Brandon Weeden was able to tally a first down for the Cowboys, but they would again put, this time going six-and-out. 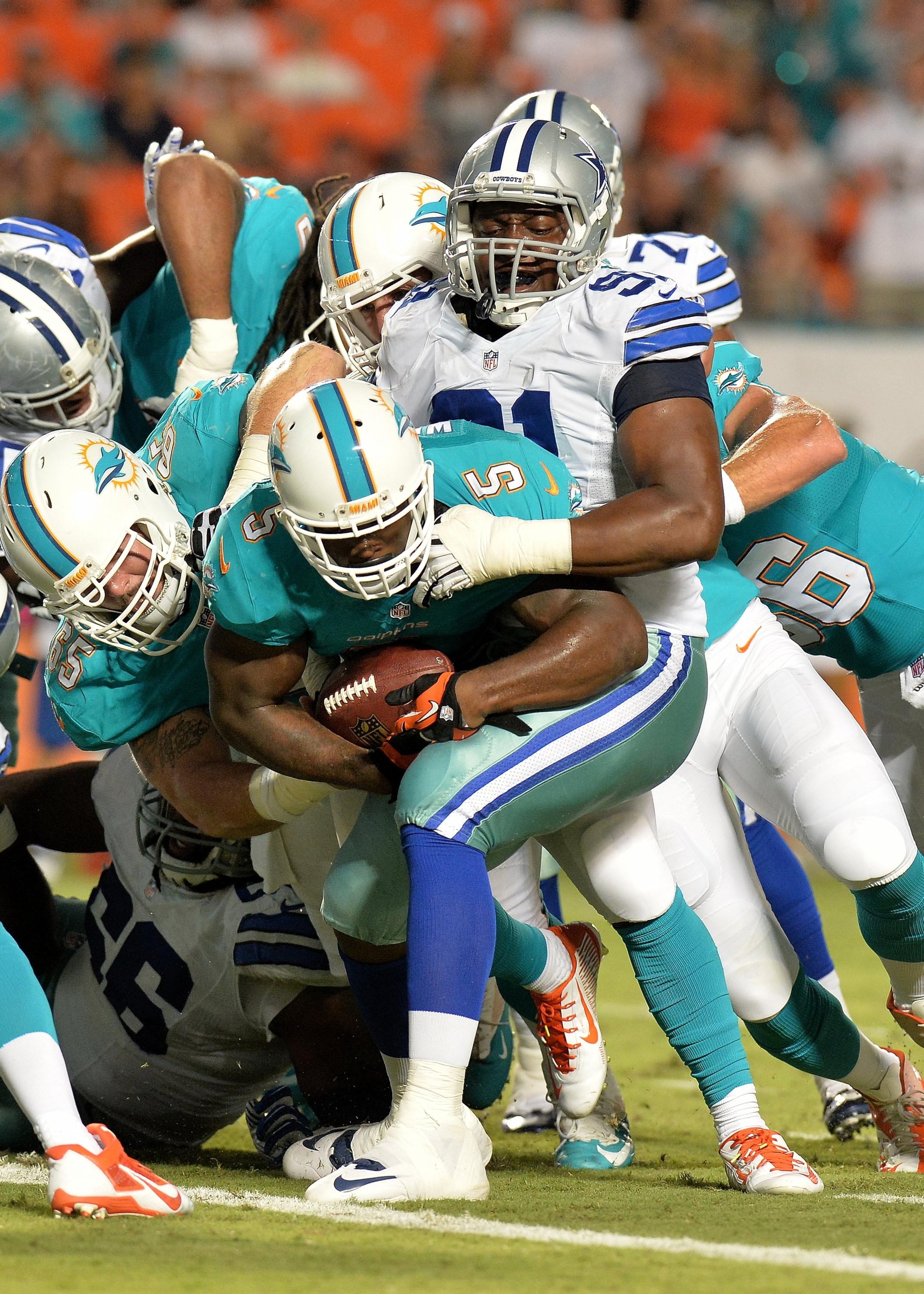 Miami's second team offense would head onto the field for the Dolphins, led by quarterback Matt Moore. In a drive dominated by both Damien Williams and Damian Williams, Miami would drive 71 yards on five plays for a touchdown. Wide receiver Damian Williams caught a 54-yard pass from Moore to put the Dolphins on the Cowboys' five-yard line. Running back Damien Williams picked up 21-yards on the ground before the long pass, then ran for one more yard on the next play to put the ball in the endzone. Running back Williams would also convert the two-point try for the Dolphins, giving them an 11-6 lead.

That lead would not last long, however, as the Cowboys second team offense was able to mirror Miami's drive, going 74-yards in six plays for their own score from Weeden to wide receiver LaRon Byrd for 27-yards.  With the extra point, Dallas was able to reclaim the lead with a 13-11 scoreline.

They then extended that play on the next drive, when Moore bobbled the shotgun snap, then tried to still throw the quick screen.  Cowboys cornerback Tyler Patmon read the play from the start and caught the ball in full stride before it could be completed, running straight back down the field for the pick six and a 20-11 lead for the Cowboys.

Miami struck back on the next drive, pulling to within a point on a beautiful touchdown by Harold Hoskins. The tight end caught the pass up the seam, then, as he got hit, jumped and stretched for the goal line. The touchdown was set up after a 53-yard run from Orleans Darkwa, who would have had a touchdown himself if not for Patmon tracking him down from behind.

The Dolphins would convert on a two point conversion, Moore finding Darkwa for the successful attempt.  With the Potter injury in the first half, the Dolphins did not attempt another field goal or extra point. 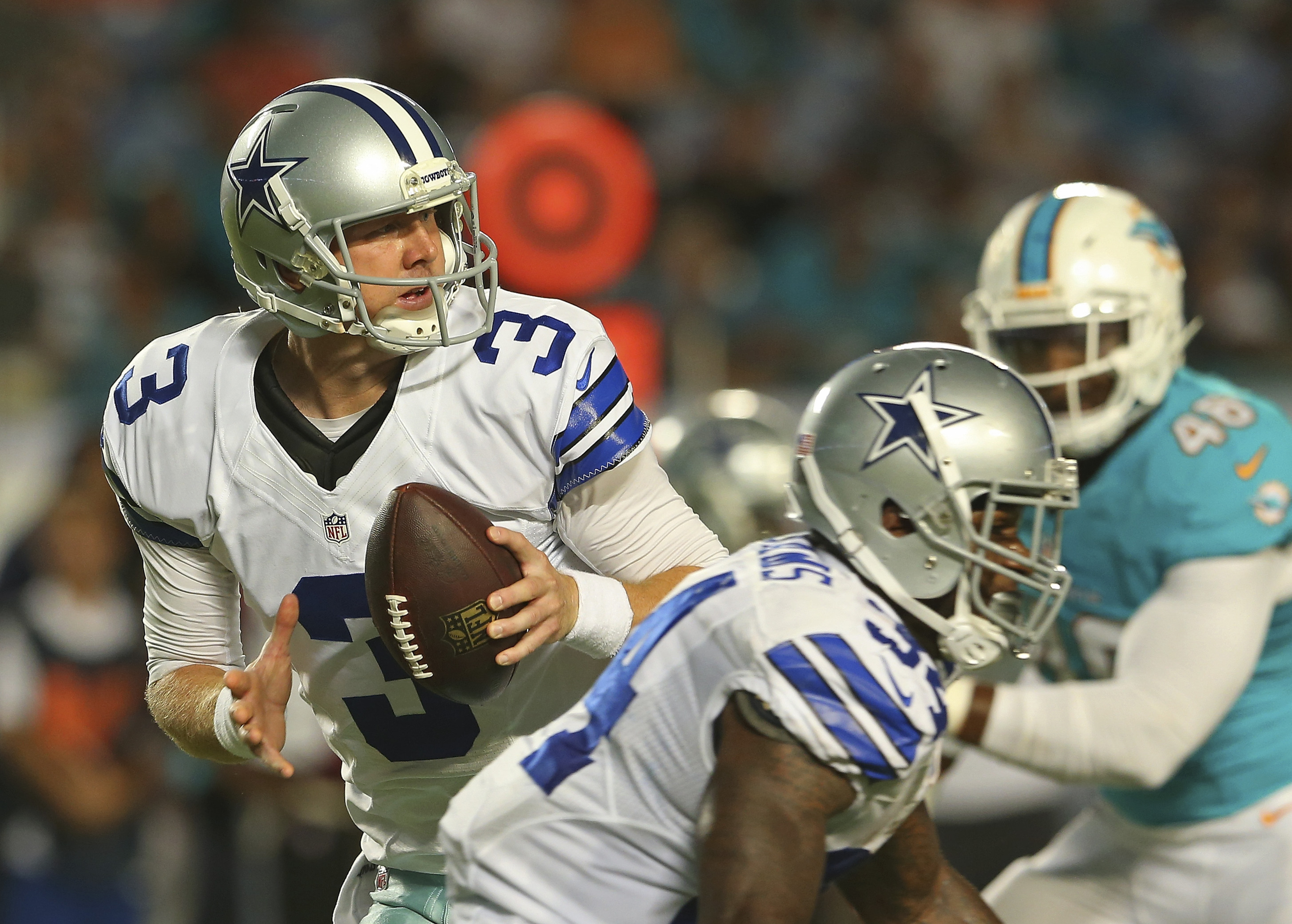 Brandon Weeden #3 of the Dallas Cowboys looks for a receiver in the third quarter of play against the Miami Dolphins during a preseason game at Sun Life Stadium on August 23, 2014 in Miami Gardens, Florida. (Photo by Mike Ehrmann/Getty Images)

After a Dallas punt, Moore again drove the Dolphins offense down the field.  The drive appeared to stall a couple of times deep in Cowboys territory, but an illegal contact penalty and a ridiculous helmet-to-helmet hit from Ahmad Dixon on wide receiver Matt Hazel kept Miami in possession and able to score.  A couple of plays later, Darkwa was able to jump over the pile for the touchdown, giving Miami the lead.  After a failed two point conversion, in which Armon Binns was called for offensive pass interference, the Dolphins held a 25-20 lead with 1:45 remaining in the game.

Dallas was unable to mount a drive against the Dolphins defense, and turned the ball over on downs.  Miami then went into the victory formation, with Moore simply kneeling on the ball to kill the clock.

For the Dolphins, Tannehill finished the game 13-for-21 for 119 yards, with the one interception, giving him a 57.4 passer rating, while Moore was 12-for-19 for 173 yards, with a touchdown and an interception, resulting in a 88.3 passer rating. Moreno recorded 64 yards on 10 carries, with Lamar Miller adding 34 yards on seven attempts for himself. Darkwa was the game leader in rushing yards, totaling 70 yards on six carries (53 yards on one attempt), with a touchdown; Damien Williams finished with 33 yards and a touchdown on seven carries. Wallace totaled six receptions, for 67 yards, with Hartline backing him up with three receptions for 25 yards.

With the completion of this game, the NFL calendar has officially reached the cuts phase of the preseason. By Tuesday at 4pm ET, every team has to be down from 90-players to the 75-man limit. Miami will have to cut 12 players to reach the limit, having already released tight end Michael Egnew, cornerback Jalil Brown (injured), and defensive tackle Micajah Reynolds this week.

The Dolphins will face the St. Louis Rams in Sun Life Stadium on Thursday in the final round of preseason games. Teams will be required to cut from 75-players to the regular season 53-man roster limit following the preseason Week 4 games.

Cowboys vs Dolphins Coverage: Miami comes back for 25-20 win