The Miami Dolphin today announced four new members of their Walk of Fame. The induction ceremony will happen prior to the club's September 21 game.

The Miami Dolphins have announced four former players who will be inducted into the team's Walk of Fame on September 21, 2014.  The ceremony will take place before the team's contest against the Kansas City Chiefs.

The Dolphins announced the four players as members of the team's four different eras: 1966-1975 (the "foundation era"), 1976-1985, 1986-1995, and 1996-2008.  The first member announced was guard Ed Newman, who played from 1973-1984 and falls into the first era for the team.  Newman played both left and right guard for Miami, and was a member of the team during their Super Bowl VIII championship, and their appearances in Super Bowls XVII and XIX.  He was a four time Pro Bowl selection, as well as a two time Outstanding Offensive Lineman for the team. 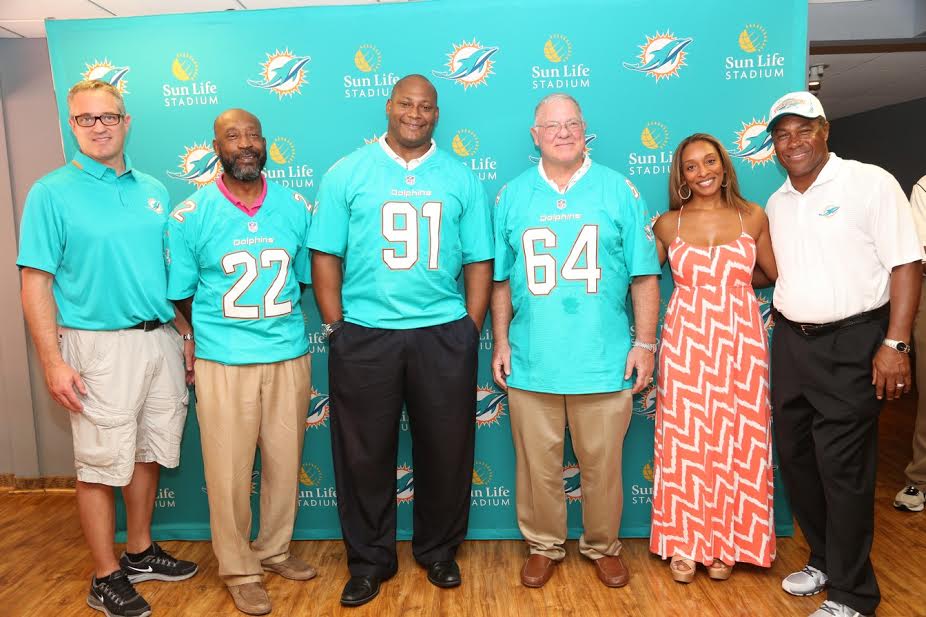 For the 1976-1985 era, the Dolphins will recognize running back Tony Nathan.  Playing from 1979-1987, Nathan tallied 3,543 rushing yards for Miami, as well as 3,592 receiving yards, with 32 touchdowns.  He is the only player in team history to be in the top ten leaders in career rushing yards and receptions.  He was the starting running back for the Dolphins in both Super Bowl appearances of the 1980s, Super Bowls XVII and XIX.  After retiring from the game, Nathan worked as an assistant coach for the Dolphins from 1989-1995.

Nathan currently works as a bailiff for Newman.

Jeff Cross will be inducted as a member of the 1986-1995 era, having played for Miami from 1988-1996.  Over that time, the defensive end totaled 59.5 sacks, with one Pro Bowl appearance.  His sacks still rank as the fifth most in team history.

The final member of the 2014 class will be cornerback Sam Madison, representing the team's 1996-2008 era.  Madison spent the 1997-2005 seasons playing for Miami, earning four Pro Bowl selections in that time, the first cornerback to be selected to the All-Star game for the Dolphins.  He was also a three team All-Pro selection, and is third in team history with 31 interceptions.

Madison currently works as a radio analyst for the Dolphins.

The ceremony will take place at the Walk of Fame outside Gate C of Sun Life Stadium at 12pm ET on September 21.  The walk was established as a way to recognize individuals who played significant roles in team history.  The Joe Robbie Alumni Plaza, which includes the Joe Robbie statue, is designed to honor the alumni and coaches that have been a part of the team's 49-year history.

The Dolphins also announced the date for the induction of the newest member of the Ring of Honor inside the stadium.  No player has been announced, but the ceremony will take place during the team's Alumni Weekend December 19-21, including the game against the Minnesota Vikings on 21, during which the name will be unveiled on the Ring.