The Miami Dolphins are past the midway point of their 2014 NFL Preseason schedule, with the first round of roster cuts looming just over a week away.  How is the Miami Dolphins' 53-man roster taking shape, and what changes came about from Saturday night's game against the Tampa Bay Buccaneers? 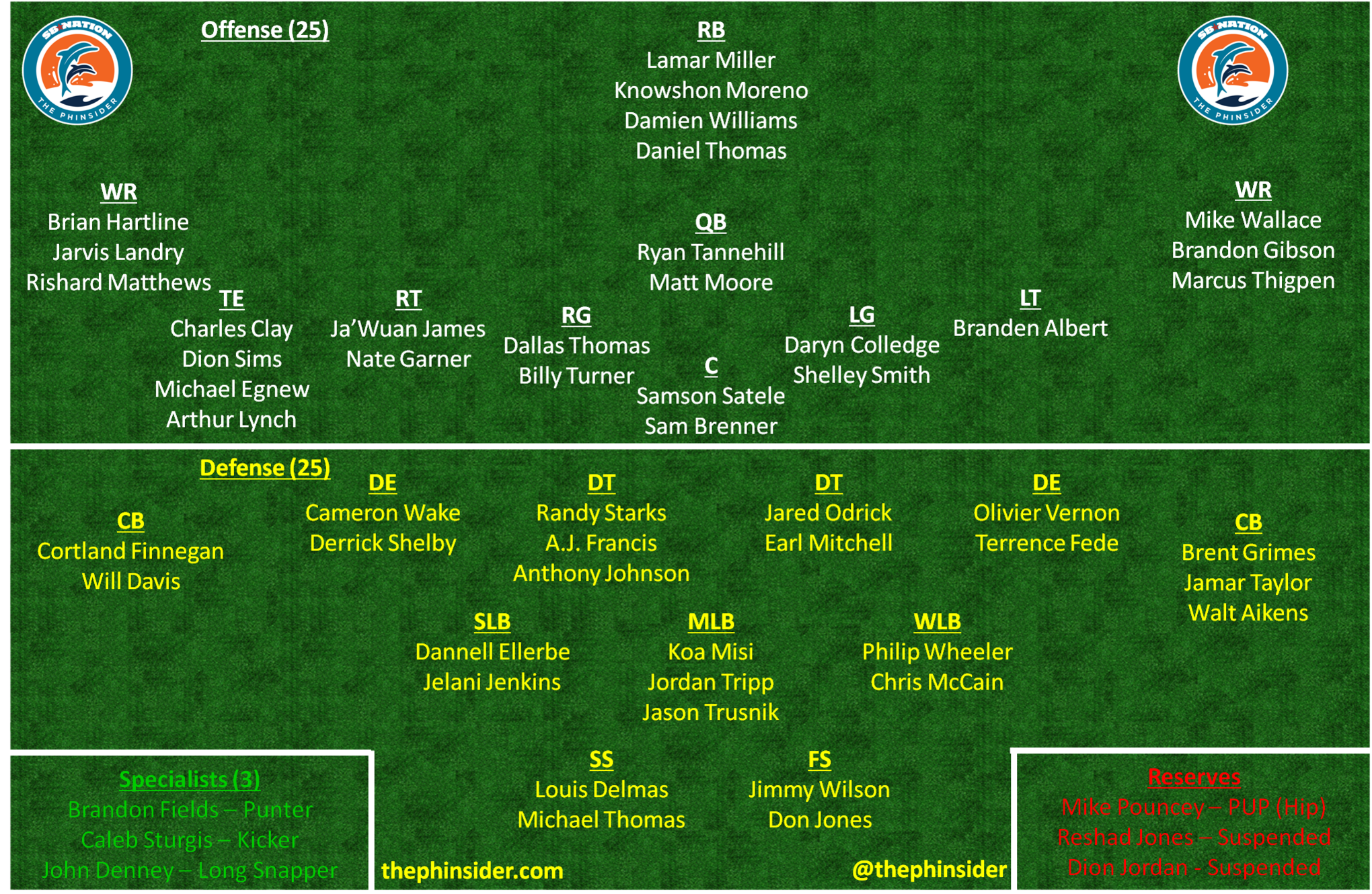 Quarterbacks (2) - No change from last week.  Ryan Tannehill and Matt Moore will likely be the only two quarterbacks on the roster, with a third potentially on the practice squad.

Running backs (4) - The running backs changed some, with Mike Gillislee falling off the 53-man roster and Damien Williams making it.  Daniel Thomas is still clinging to the last spot behind Lamar Miller, Knowshon Moreno, and Williams, simply because, until someone shows they are more valuable to the running game, Thomas keeps the spot.

Wide receivers (6) - I added a sixth wide receiver in this week's version of the roster, with Brian Hartline, Mike Wallace, Jarvis Landry, Brandon Gibson, and Rishard Matthews being joined by Marcus Thigpen.  It really comes down to Thigpen's value as a scatback, slot receiver, return man that forces him onto the roster.  He's clearly not a sure thing, but he is someone who should be in consideration at this point.

Tight Ends (4) - Charles Clay says he is going to be ready for the season opener, but the team still has to be prepared incase his knee injury has a set back.  Even without that possibility, however, Miami could be looking to carry more tight ends than expected, given how heavy they are at the position right now.  Right now, they have four on this version of a roster prediction, with Clay joined by Dion Sims, Michael Egnew, and Arthur Lynch.

Offensive line (9) - Adding Marcus Thigpen meant losing an offensive lineman, with Jason Fox falling off the roster.  The team needs offensive line help, but it is not going to find it by carrying a tenth player.  Branden Albert and Ja'Wuan James are set as the starting tackles, while Samson Satele appears to be the starting center, unless Mike Pouncey (hip) can make good on his push to be ready by opening day.  The two guard positions are still manned by Daryn Colledge and Dallas Thomas in this version, but the gap between them and Billy Thomas, Shelley Smith, and Sam Brenner was drastically reduced after the Buccaneers game.  Nate Garner still mans the line as the do-everything reserve.  Assuming Pouncey starts the year on the Physically Unable to Perform list (which would sideline him for at least the first six weeks of the year), Sam Brenner claims the last spot on the line - though do not be surprised if it is Shelley Smith who is released instead of Brenner whenever Pouncey is ready.

Defensive end (4) - No changes here, with Cameron Wake and Olivier Vernon manning the starting spots, and Terrence Fede and Derrick Shelby the reserves.  Dion Jordan's suspension opened up the door for Fede, but the rookie defensive end does not seem to have needed that opening.  He has kicked the door down, and when Jordan comes back, Miami will have to figure out how to open up a roster spot, because losing Fede does not seem to be the right answer.

Defensive tackle (5) - Not a lot a changed on the defensive side of the ball, and the defensive tackle position is exactly the same.  Randy Starks, Jared Odrick, and Earl Mitchell man the starting spots, while A.J. Francis and Anthony Johnson appear set to back them up.

Linebackers (7) -The seven players making the roster did not change, with Dannell Ellerbe, Koa Misi, and Philip Wheeler still in the top spots.  Chris McCain seems like a lock to make the roster at this point, while Jelani Jenkins should be there as well, though he might be closer to the bubble than some people realize.  The change comes at the reserve middle linebacker spot, where Jordan Tripp moves ahead of Jason Trusnik.  At this point, Trusnik is likely on the roster to provide a veteran backup on defense, and for his special teams ability.  He could be in danger if Miami has to find a roster spot somewhere else.

Cornerbacks (5) - The Dolphins continue to carry just five cornerbacks, but do not have to worry given the number of safeties who could, and will, move up to play corner throughout the year.  Cortland Finnegan holds the starting spot opposite Brent Grimes, while Will Davis appears to be the favorite to come on the field in nickel situations.  Jamar Taylor has the fourth spot, while Walt Aikens picks up our fifth position (despite the team using him as a safety recently).  Jalil Brown is one of the last players cut, and could be in consideration if the Dolphins decide they need more depth in the secondary.

Safeties (4)- The last line of defense looks like it will be Louis Delmas and Jimmy Wilson to start the season, and while Reshad Jones is serving his suspension.  Behind those two, Michael Thomas and Don Jones claim the last two spots, with Jones replacing Jordan Kovacs on this version of the roster.  It is a tossup at this point between those two, and should come down to special teams play.

The only issue with the specialists, where Brandon Fields will be the punter and John Denney will be the long snapper, is if Caleb Sturgis will be healthy enough to maintain his kicking duties.  Sturgis looked ready to play on Saturday, but reportedly re-aggravated the groin injury he has been rehabbing throughout training camp.  If the Dolphins have to make a move at kicker, Sturgis could land on Injured Reserve, possibly using the team's return designation spot for him, which would open the door for John Potter, who connected from 48- and 50-yards during the Buccaneers game.

No changes here.  Pouncey could be placed on the PUP list, which would result in him being unavailable for the first six weeks of the season, but would also open a roster spot for another player.  Jordan and Jones will serve their respective four game suspensions.  The Dolphins will have to make some hard decisions when everyone starts returning to the roster.

The Dolphins will play home against the Dallas Cowboys this weekend (August 23, 7pm ET). The first set of roster cuts begin after that contest, with all NFL teams required to move from 90-man roster limit to a 75-man limit by 4pm ET on August 26.

Miami will then play their last preseason game, hosting the St. Louis Rams in Preseason Week 4 (August 28, 7pm ET), before the final round of roster cuts. All teams will have to reduce their rosters from 75-players to the regular season limit of a 53-man roster.