Dolphins vs Buccaneers: Breaking down Ryan Tannehill to Jarvis Landry for 26 yards

The Miami Dolphins beat the Tampa Bay Buccaneers on Saturday night, coming away with the 20-14 victory. Early in the game, quarterback Ryan Tannehill connected with rookie receiver Jarvis Landry for a gain of 26 yards.

Share All sharing options for: Dolphins vs Buccaneers: Breaking down Ryan Tannehill to Jarvis Landry for 26 yards

In the first quarter of the Miami Dolphins' victory over the Tampa Bay Buccaneers Saturday night, quarterback Ryan Tannehill connected with rookie wide receiver Jarvis Landry for a 26-yard gain.  The Dolphins had the ball at their own 23-yard line following a 12-yard throw and catch from Tannehill to Brandon Gibson for a first down conversion. 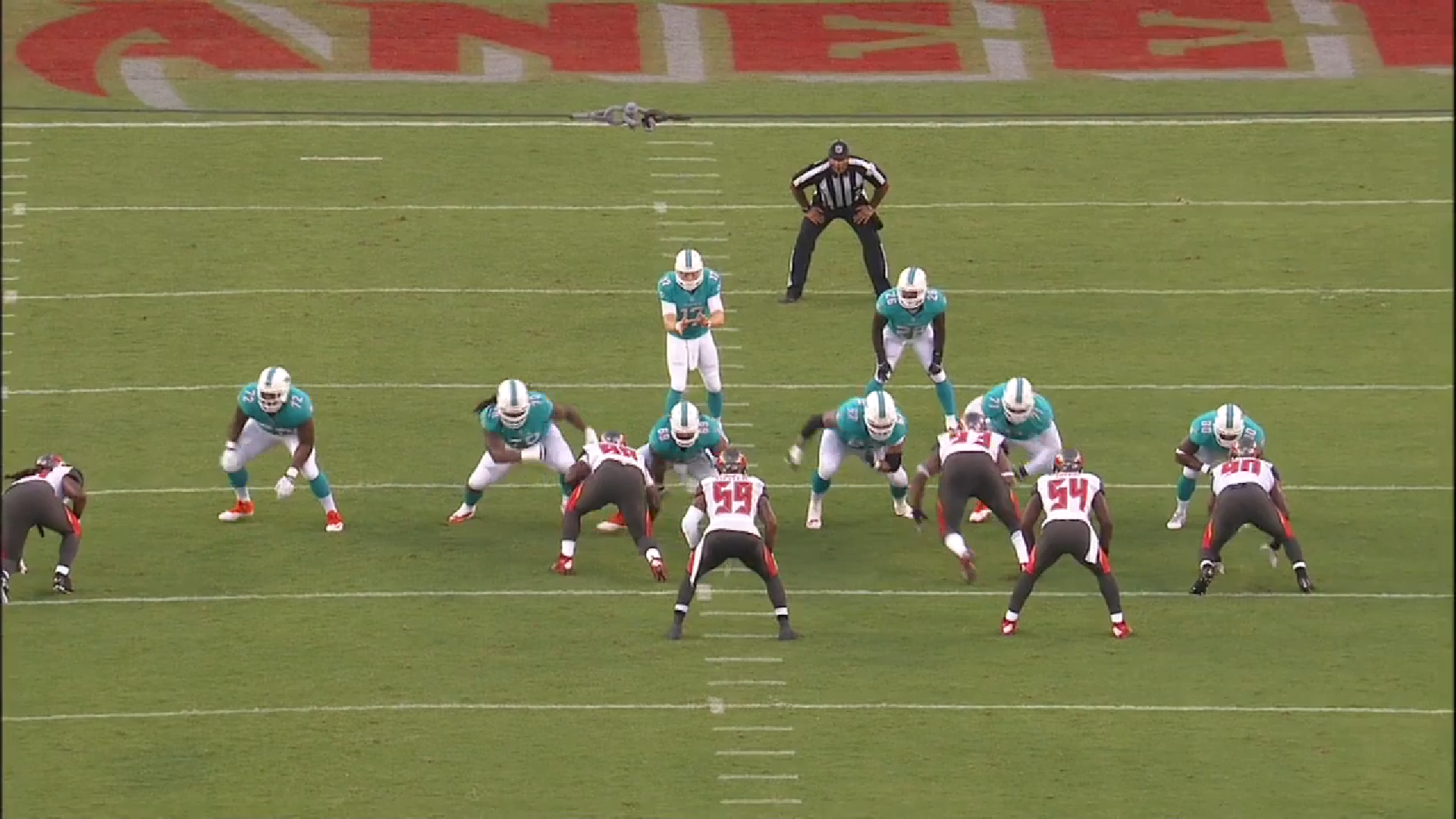 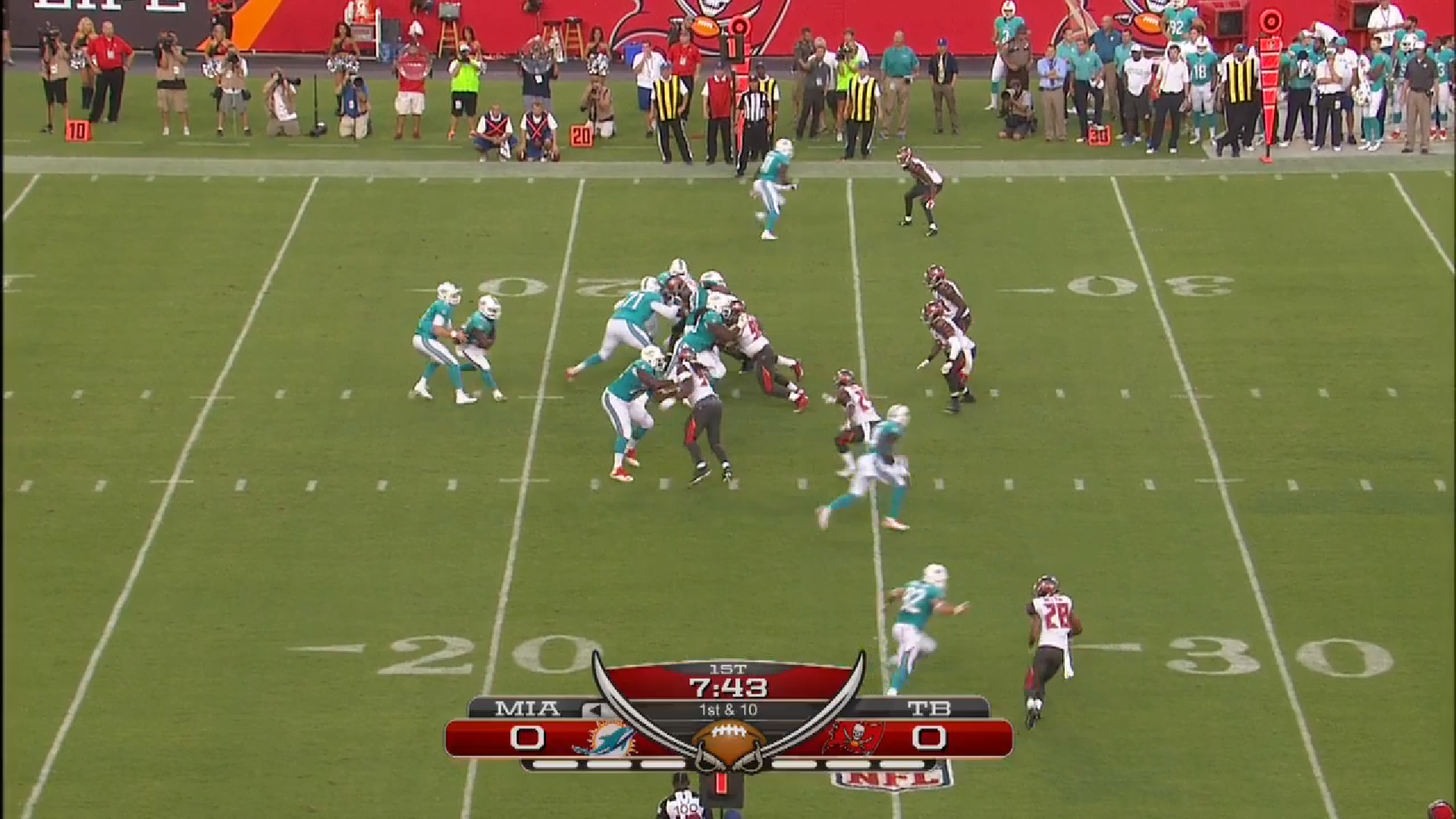 At the snap, Landry and Hartline begin running parallel slant routes, while Wallace looks to draw his coverage with a double move up the field.  In the backfield, what makes this play effective is a great play action fake from Tannehill, a fake that Miller sells well.  That move freezes both linebackers, and draws Johnson off his coverage of Landry to try to fill the giant hole in the defensive line left from Clayborn's positioning out wide. 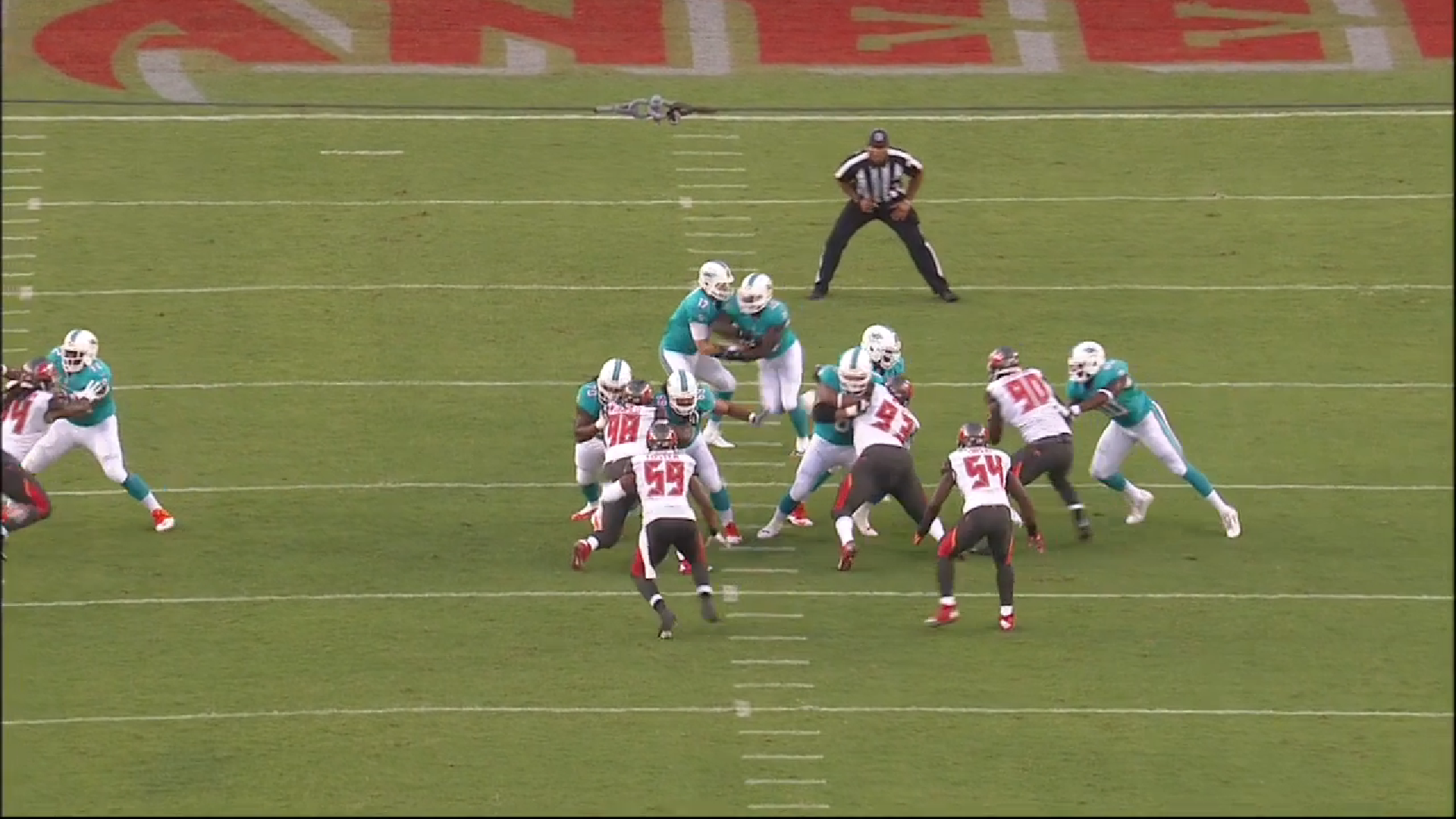 Changing views of the play to the endzone camera, the gap in the defense that draws Johnson's attention is clearly visible.  Tannehill's fake pulls in Johnson, as well as Foster and David. 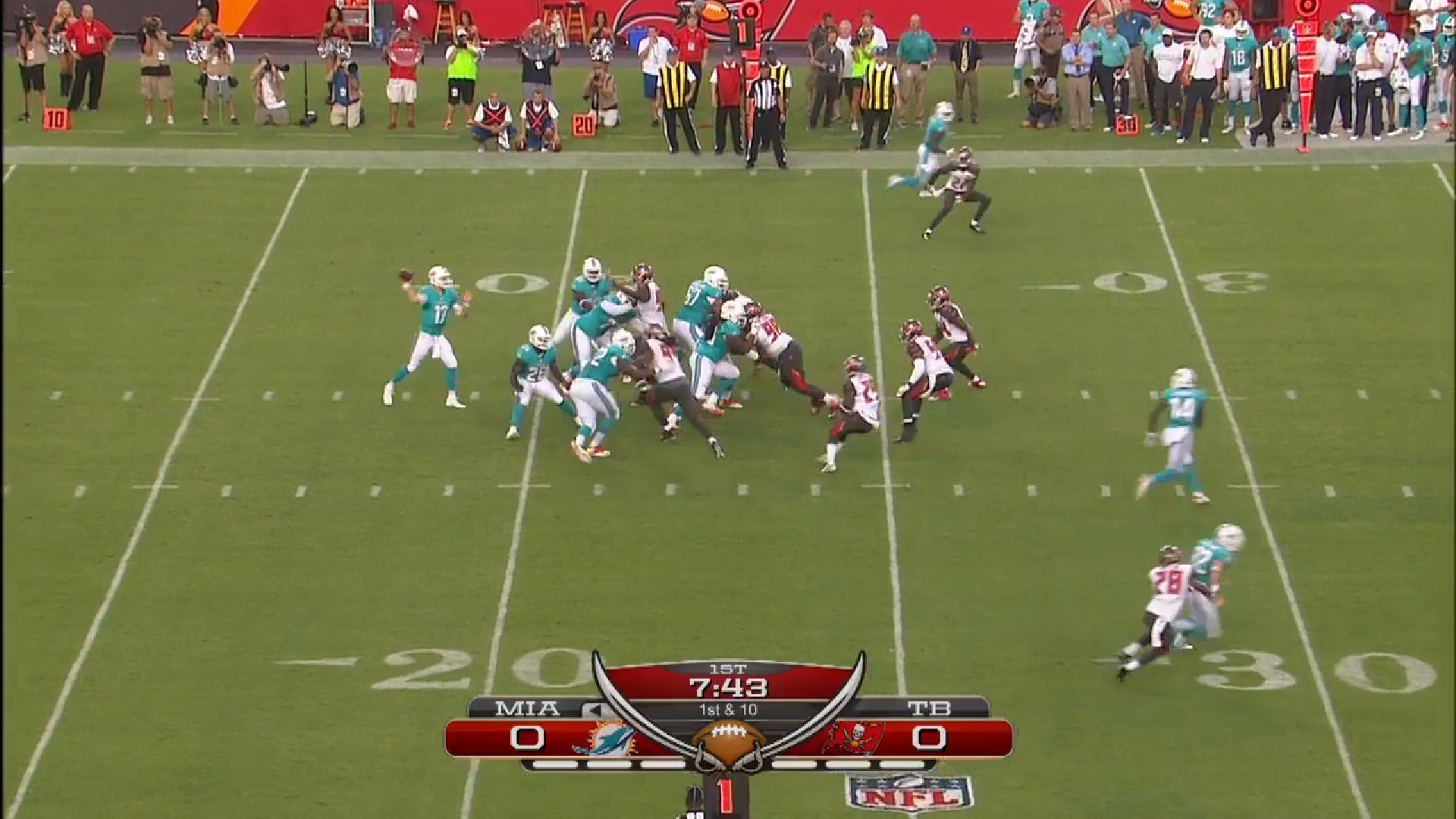 As Tannehill pulls up the ball for the quick pass, Johnson is realizing it was a fake, but by then, Landry is wide open.  Tannehill's quick decision on where to go with the ball after the fake ensured Landry had the chance to make the catch and keep moving up field. 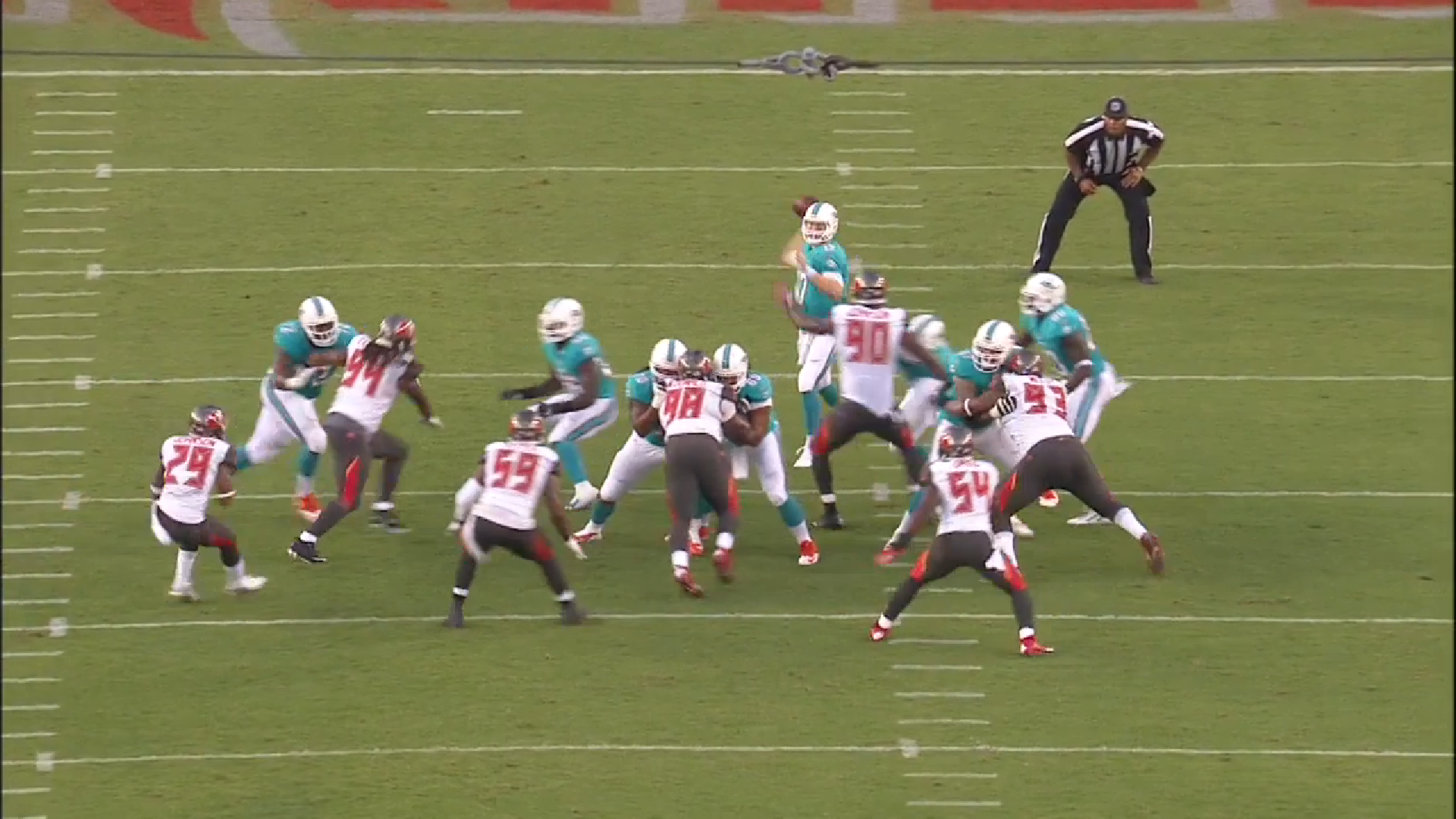 Switching views again, the incorrect read from the two linebackers and Johnson is obvious, as they all start trying to backpedal off of the line of scrimmage. 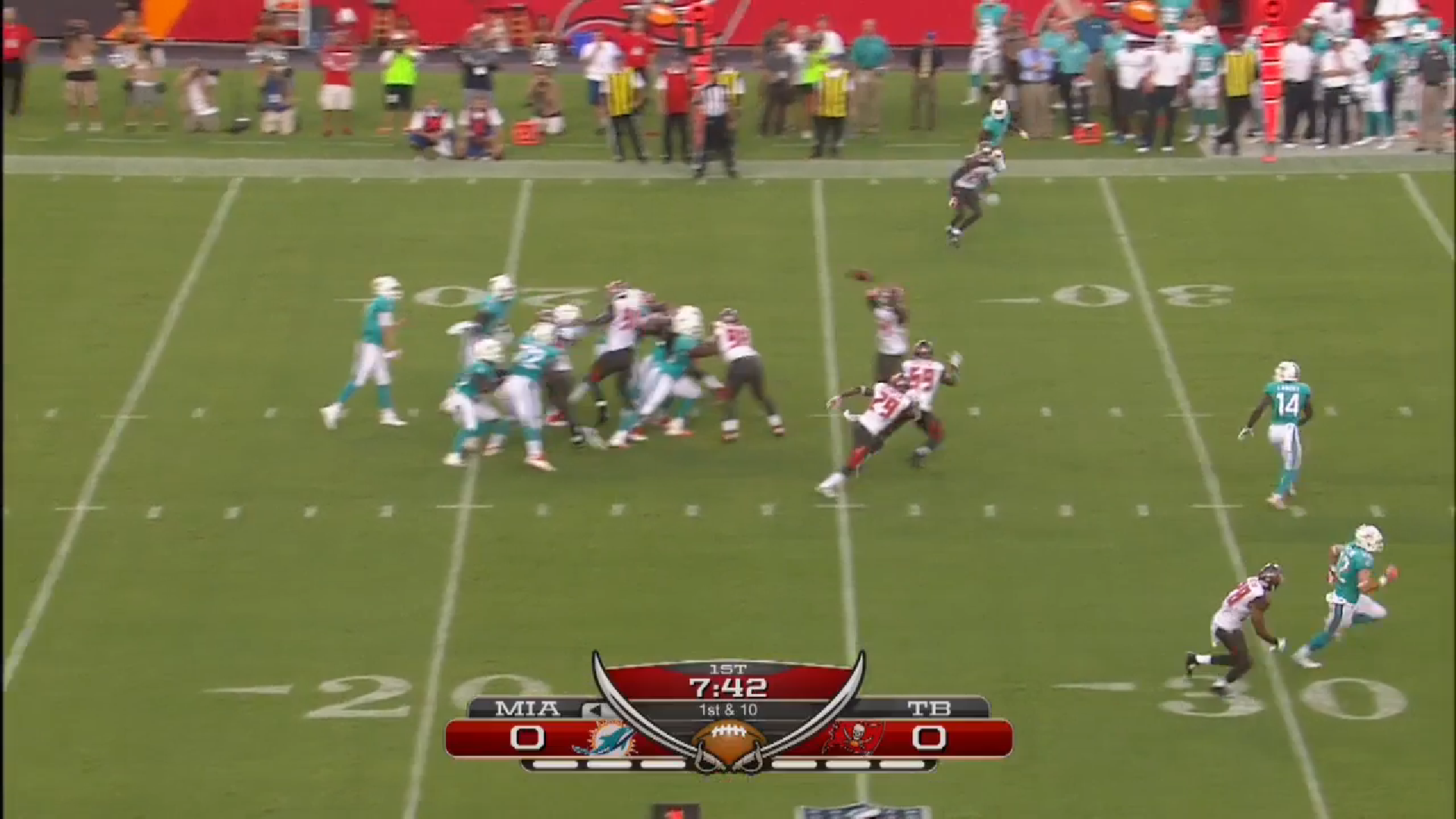 Tannehill's throw clears just over David's hands and to Landry, who is wide open in the middle of the field. 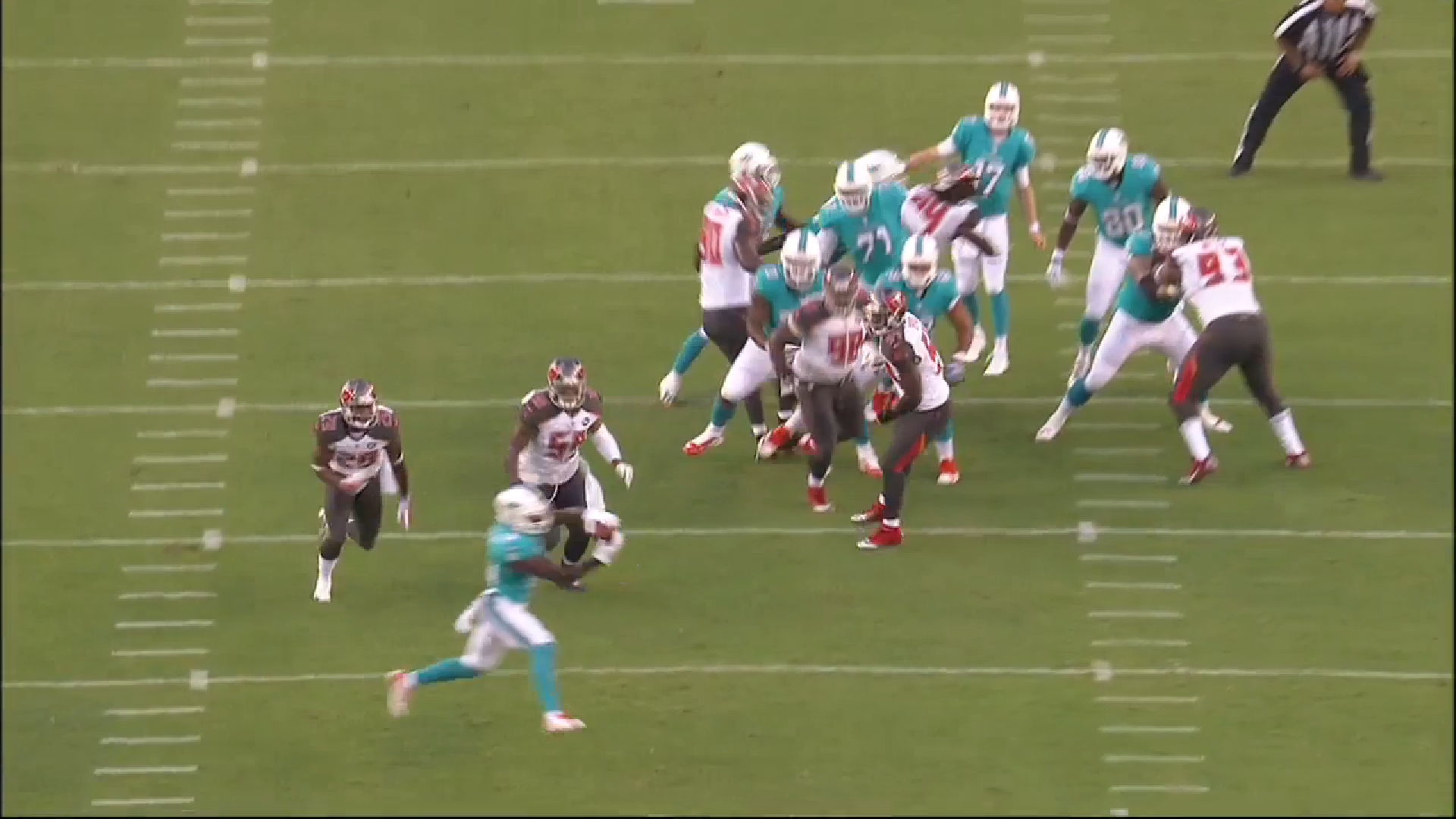 As the ball reaches Landry, the placement is perfect, as is the catch.  Tannehill put the ball directly in front of his receiver, allowing Landry to catch the ball in full stride.  Landry catches the ball cleanly with his hands, not trying to use his body for the reception.  He then immediately begins moving up field. 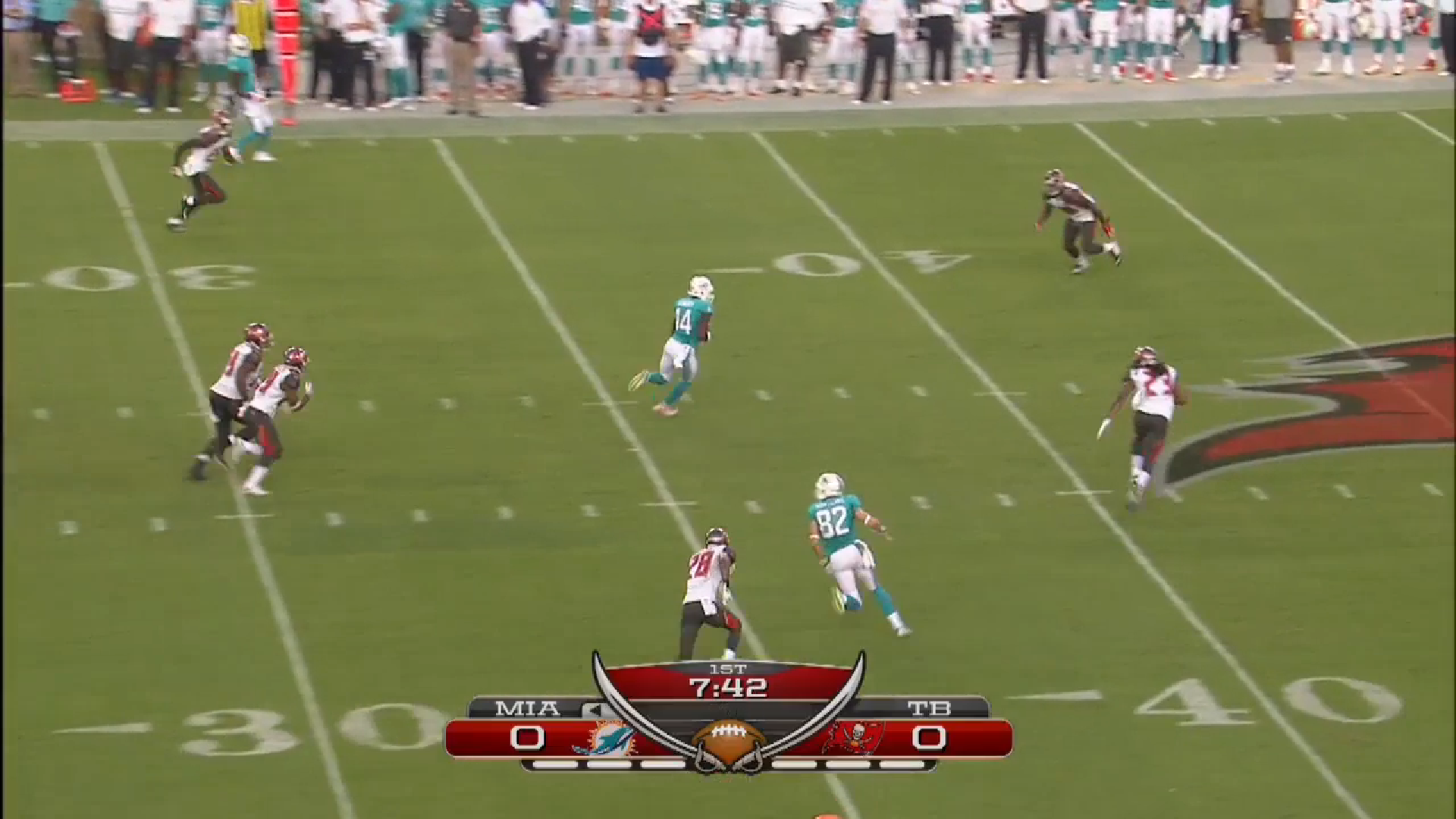 The play design, and the effective play action fake allows Landry to get the ball with a five-yard cushion, and the space to start adding yards after the catch. 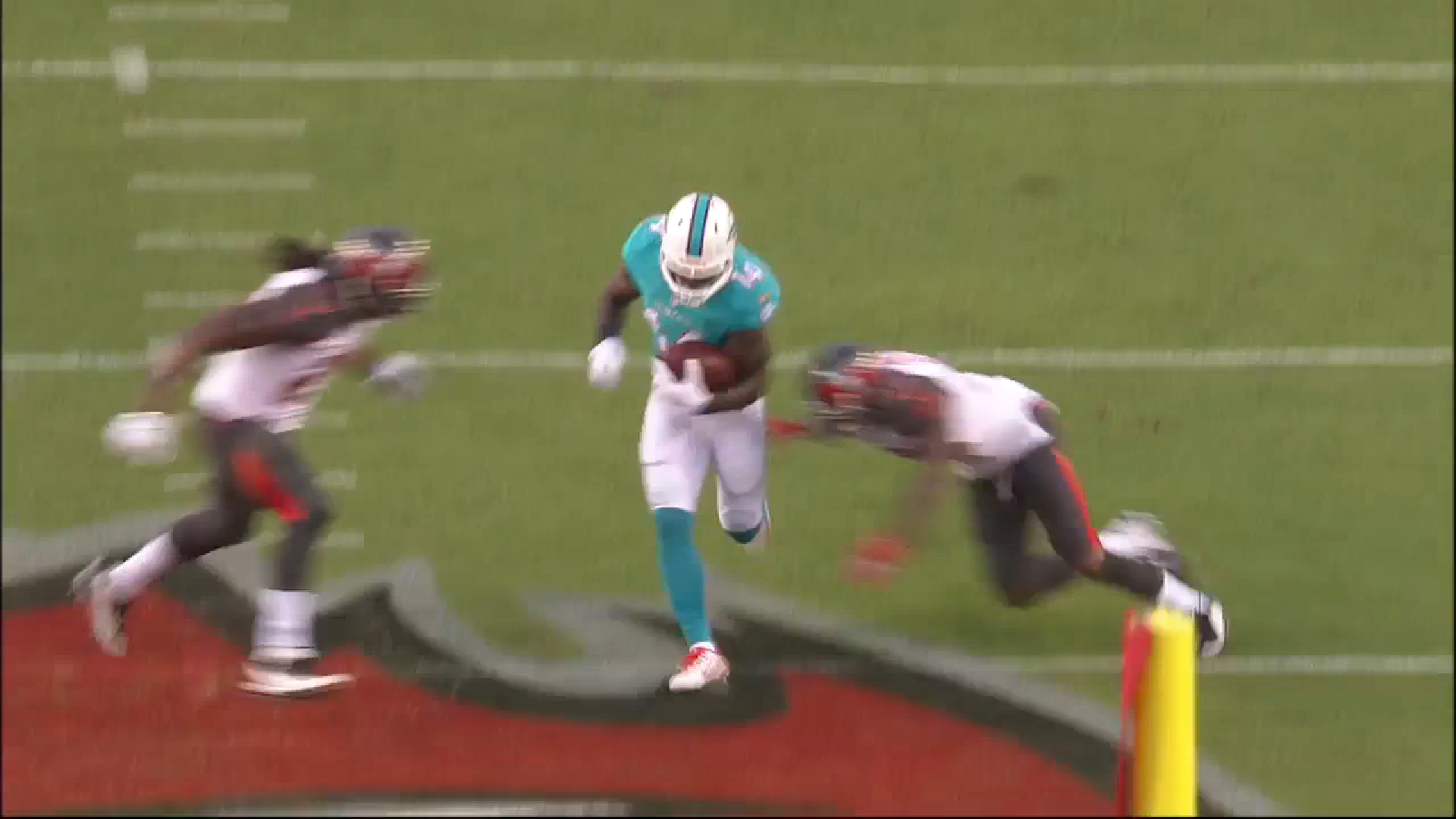 Landry looks to split Mark Barron (23) and Dashon Goldson (38) as he reaches the 45-yard line.  Unfortunately, they would be able to pull him down. 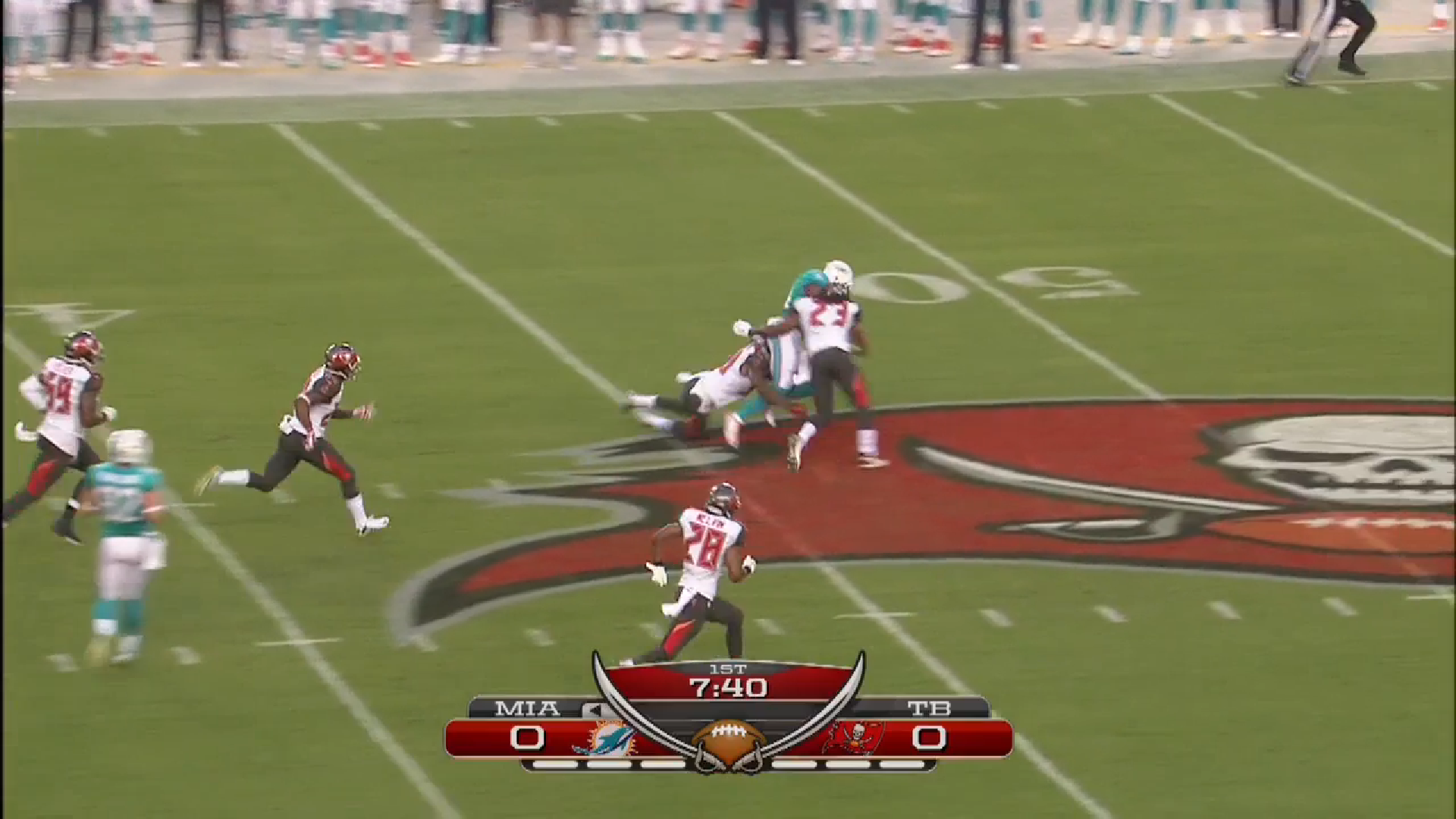 But not before he is able to add a couple more yards. 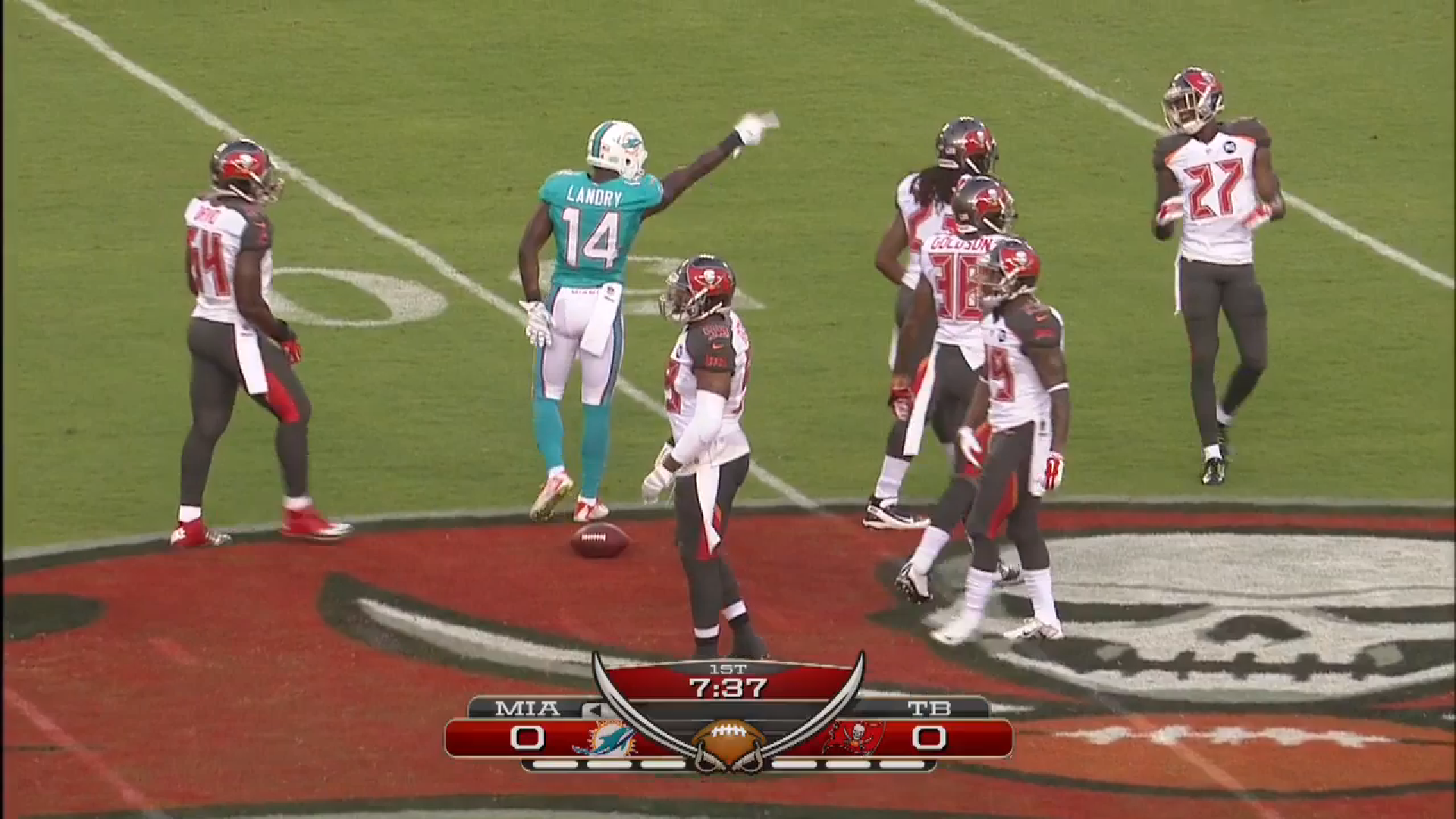 And, just in case you were not sure, Landry makes sure to clarify that his 26-yard catch-and-run is, in fact, good enough for another Miami Dolphins first down.