The Miami Dolphins beat the Tampa Bay Buccaneers last night. Whose stock rose, and whose fell, from the game?

The Miami Dolphins came out of Raymond James Stadium with a win over the Tampa Bay Buccaneers last night.  The second Preseason game featured some strong performances from the Dolphins, as well as some players who saw their stock value fall.  Who had the top gains and losses from the contest?

Stock Up: Matt Moore, quarterback - Both Moore and starter Ryan Tannehill were sharp during the game, though Moore directed touchdown drives, where Tannehill did not.  Add in the fact that Moore seemed to have the more room to gain value, and he gets the nod here.  Fans were ready to move on from Moore, wanting him traded or released, rather than pay his large cap number.  After last night's performance, and understanding what kind of backup quarterback Miami is lucky enough to have, that talk should go away.  Moore stats: 13-for-19, 158 yards, 1 touchdown pass, 111.3 passer rating

Stock Down: Dallas Thomas, guard - The backlash against Thomas this morning may be a little over-the-top, given he was facing Gerald McCoy for much of his playing time, and this is just Thomas' second NFL (preseason) start.  That's a tough task for any second year player.  The concern, however, should be justified, as the Dolphins have to face Vince Wilfork and Kyle Williams in Weeks 1 and 2 this year, as well as Ndamukong Suh later in the year, and having a guard able to block a big name defensive tackle is a requirement for Miami.  Thomas does not have a lot of time to grow into the position, so the Dolphins looking at other options - on the roster or potentially on another team's roster - is the right answer at this point.  Thomas could still develop into a good offensive lineman at the NFL level, but Miami may not have the luxury of allowing him time to develop.

Stock Up: Rishard Matthews, wide receiver - If Matthews has not claimed a roster spot by now, then it is not clear what a receiver has to do to earn that spot.  Matthews stepped up last year to fill a receiving corps that was plagued by injuries.  Now at full strength, Matthews is still showing that he should be a factor in the passing game.  A beautiful toe-tapping touchdown catch just before halftime gave Miami the lead, and the momentum, for the remainder of the game.  Matthews stats: 3 receptions, 43 yards, 1 touchdown

Stock Down: Lamar Miller, running back - Similar to Thomas above, perhaps the ridicule of Miller is a little exaggerated.  The Miami offensive line did not do the starting running back any favors against a very strong defensive line.  Miami was also without two of their top running backs, with Knowshon Moreno and Daniel Thomas not playing in the game, but when you gain three yards on three carries, your stats as a starting running back are not glowing.  Miller has to find a way to compliment what appears to be a sharp passing game, and right now, he's not exactly doing that. Miller stats: 3 carries, 3 yards

Stock Up: Terrence Fede, defensive end - Is there anything Fede has not done at this point?  Kick a field goal?  Throw a touchdown pass?  It just seems that, whenever Fede is on the field, good things are going to happen.  He is everywhere on the field, and making an impression.  Remember when the Dolphins were ridiculed for selecting the Marist College defensive end in the seventh round, because he was from a small school and would not adjust to the NFL?  I don't either.  Fede is fast becoming a fan favorite, and his play justifies that following.  Fede stats: 2 tackles, 1 sack, 1 QB hit, 1 fumble recovery

Stock Down: Mike Wallace, wide receiver - Wallace was targeted three times in the game, coming up with no receptions.  One of those was a deep ball, which appeared to be perfectly placed by Tannehill; Wallace said after the game it was exactly where the ball should have been placed, but that he was held on the route.  Looking back at the play, it does appear there may have been contact down the field, and in an era where referees are calling everything even close to contact, it could have drawn a flag but did not.  The real reason Wallace is on this list, however, is not the deep ball, but rather the screen pass he botched.  The Dolphins set up a beautiful bubble screen, with two receivers in front of Wallace to block, and a perfect throw from Tannehill - only to see Wallace let the ball hit him in the chest and bounce away.  Horrible play.  Wallace stats: 0 receptions, 0 yards (3 targets) 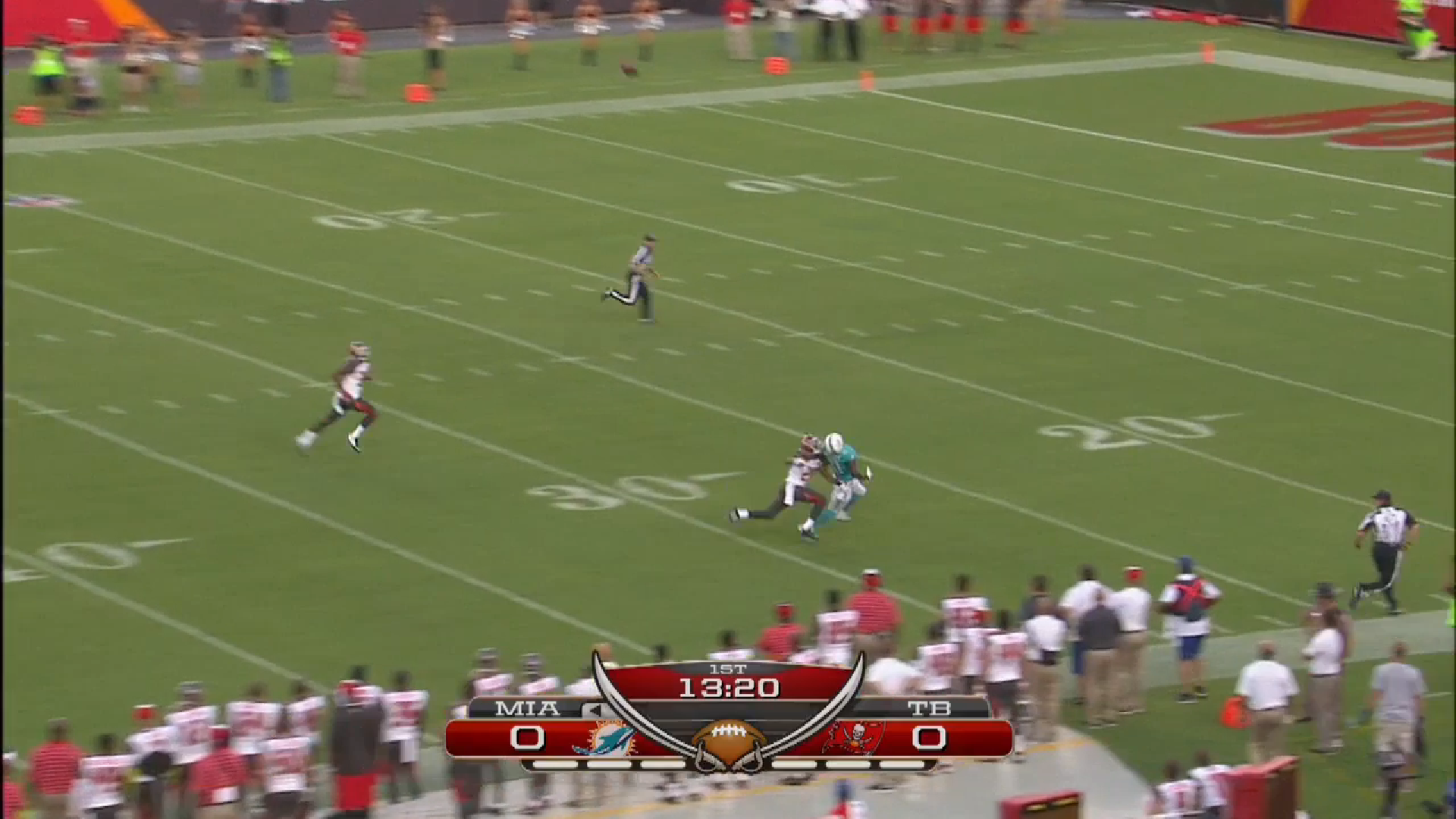 Others considered: Stock up - Koa Misi / Dannell Ellerbe - the two linebackers seemed to have a much better game tackling.  Ellerbe was called for a downfield hold that negated a sack, but overall, the linebackers seemed to have a decent game.  Maybe not spectacular, but decent.  John Potter - the new kicker for the Dolphins connected on a 48-yard field goal early in the game, then backed it up with a 51-yarder.  Will Davis - the second year cornerback is again starting to show the playmaking ability he flashed last training camp.  Stock down - Jimmy Wilson - starting at safety for the first time, Wilson has to transition to being the last line of defense for Miami.  He tried for the big hit on Mike Evans during the game, instead of wrapping up, and Evans simply bounced off and nearly scored a 42-yard touchdown if not for a great play from cornerback Brent Grimes.