The Miami Dolphins and Tampa Bay Buccaneers faced off in the second week of the NFL Preseason tonight. Miami won the game behind strong performances from Ryan Tannehill and Matt Moore.

The Miami Dolphins and Tampa Bay Buccaneers battled in the second week of the NFL Preseason tonight, with Miami taking the game to the Buccaneers in the second and third quarters.  The Dolphins come out of Raymond James Stadium with a 20-14 victory.

The Dolphins received the opening kickoff, and were able to convert on their first third down of the game, but stalled a few plays later.  The team was not able to duplicate their hot start against the Atlanta Falcons last week, where Ryan Tannehill drove the team straight down the field for a touchdown.

Tannehill missed on two passes in that opening drive, his first two incompletions of the year.  He missed on a long pass attempt to Mike Wallace, the ball coming down just in front of the streaking receiver, who, in the era of everything being called against the defense, did not get a call on what appeared to be pass interference.  The next play, Tannehill threw the ball away when Brandon Gibson was covered.

After the punt, the Dolphins were able to force the Buccaneers to likewise punt, thanks to a Jared Odrick sack on third down.  Miami was then able to drive into field goal range, where John Potter connected on a 48-yard kick.  Miami took the 3-0 lead into the second quarter.

The game changed early in the second quarter, when Gerald McCoy, who had been disruptive early in the game, simply blew through the A-gap and past second-year guard Dallas Thomas, to sack Tannehill.  The sack also resulted in a fumble, which Tampa Bay was able to recover.  Four plays and 25-yards later, Josh McCown found Vincent Jackson in the back of the endzone for the seven-yard touchdown.

Tannehill came out of the game after that, with Matt Moore making his preseason debut.  Tannehill finished the contest 9-for-14 for 110 yards, with the one sack and fumble.  He had a 88.4 passer rating on the night.

The game slowed down as the starters began rotating out for both teams.  Olivier Vernon was able to get the second sack of the game for Miami, getting to Mike Glennon and pulling him down with some help from Randy Starks.

Miami got lucky midway through the second quarter, when Mike Evans ran for what was originally ruled a 42-yard touchdown reception.  After bouncing off of Jimmy Wilson, Evans appeared destined to score.  Brent Grimes, however, chased him down from behind and stripped the ball at the one-yard line, with the ball going into the endzone before going out of bounds.  After review, the ball was rightfully ruled a fumble and Miami's ball on a touchback. 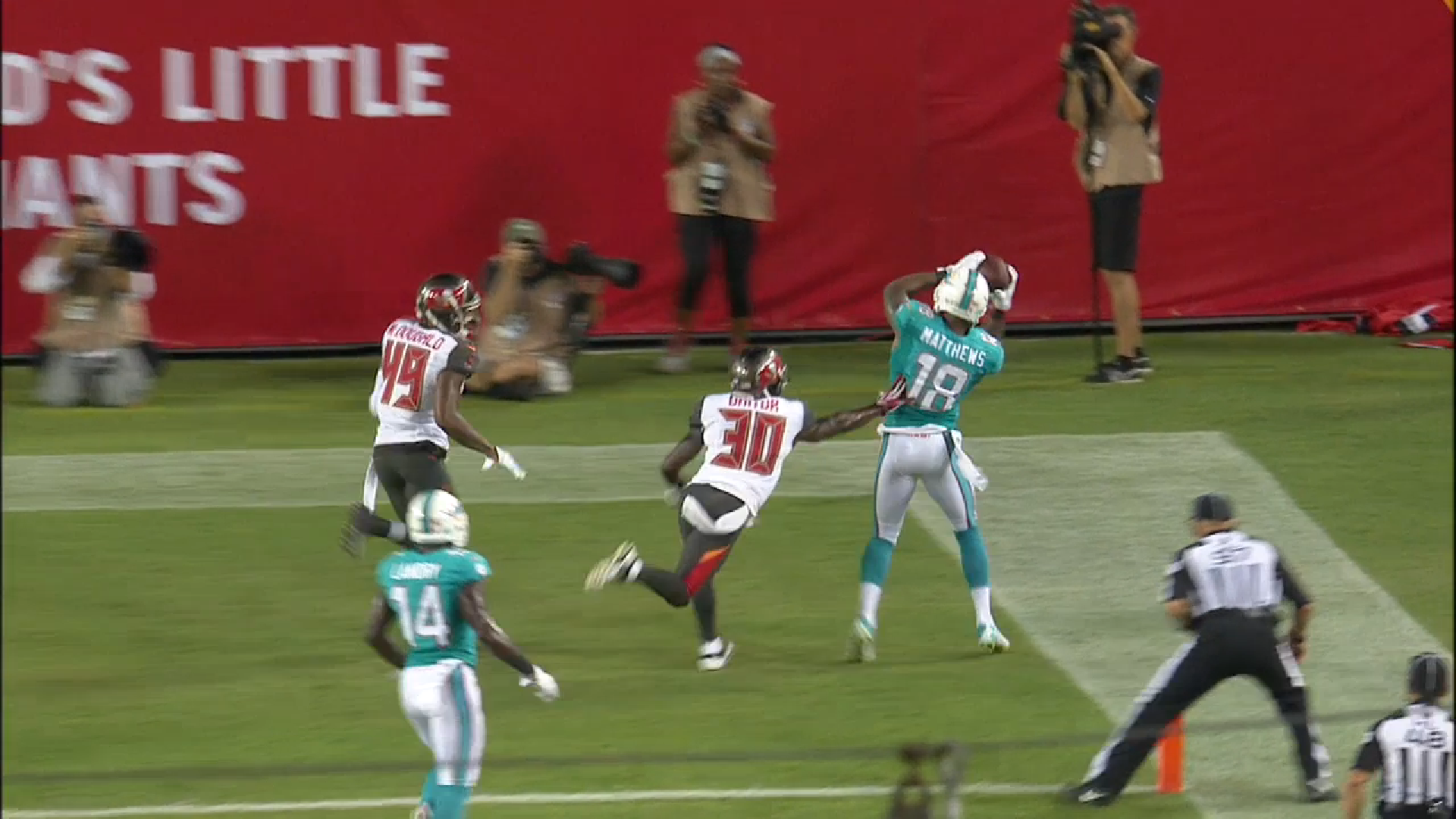 After review, the Matt Moore to Rishard Matthews touchdown pass stood, thanks to a gorgeous toe tap from Matthews.

The Dolphins would take the lead late in the second half on a gorgeous floating pass from Moore to Rishard Matthews.  The play would be reviewed, but Matthews clearly tapped his toes and was able hold on for the score and a Miami 10-7 lead at the break.

The Dolphins gained 207 yards through the air in the first half, but had a negative five yards rushing, a major concern carrying over from the 2013 season.  Tampa Bay finished the half with 107 passing yards and 36 yards rushing.

The Buccaneers would go three-and-out on their first possession of the second half, punting the ball back to Miami.  Moore took the field again for Miami, and directed a methodical drive 9-play, 71-yard drive down the field, capping it with a one-yard touchdown run from Damien Williams.  Miami extended the lead to 17-7 with just under nine minutes to go in the third quarter.

On the next drive, Dion Jordan was able to get to Glennon and record the strip sack, on the sixth play of the drive.  Terrence Fede, who has been impressive throughout training camp and the preseason, was able to fall on the ball and give Moore and the offense yet another chance to score.

The offense was unable to get anything going, but Potter was able to connect from 51-yards to add another three points to Miami's total, bringing the lead to 20-7. 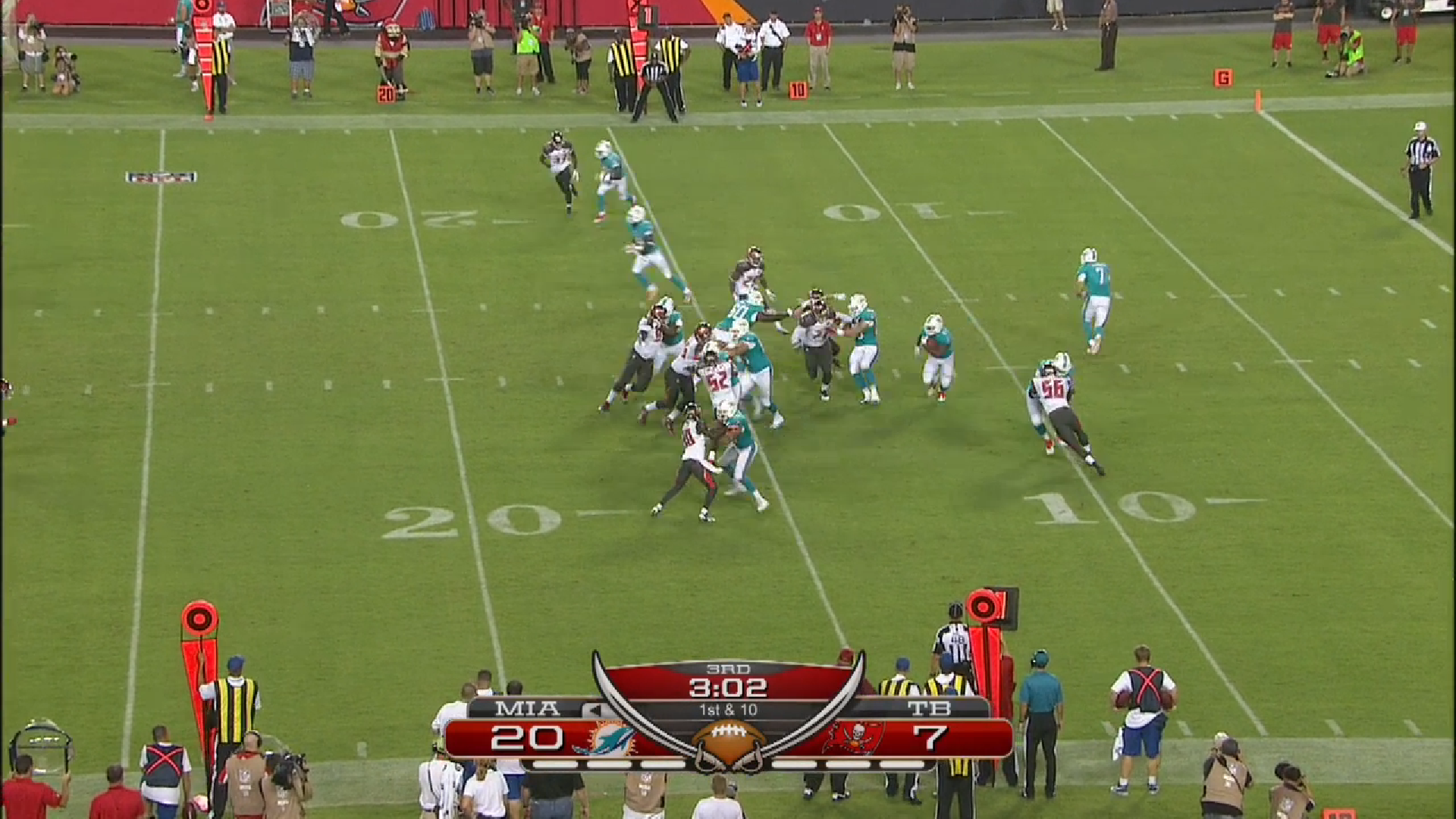 Brady Quinn makes his Dolphins debut, seven years after it was expected.

After the field goal, the Buccaneers would punt the ball back to Miami.  The Dolphins would go three-and-out on the drive, but the plays were notable for Miami for another reason.  Seven years after everyone expected the team to draft him, Brady Quinn made his Dolphins debut.

Moore finished the game 13-for-19 for 158 yards with a touchdown and a 111.3 passer rating.  Quinn was 4-for-4 for 22 yards and an 89.6 passer rating.  Damian Williams led the team with three receptions and 46 yards, while Rishard Matthews added three catches of his own, tallying 43 yards and one touchdown.  Damien Williams led the rushing attack, with 11 carries for 20 yards, and a score.  Starting running back Lamar Miller only gained three yards on three carries.

The game turned into a punt fest after that, with neither offense really able to put together a sustained drive.  The good news to that was, punter Brandon Fields demonstrated that he is regular season ready, averaging over 50 yards per punt on the night.

Tampa Bay was able to put one final touchdown on the board with 14 seconds remaining in the contest, with Mike Kafka connecting with Lavelle Hawkins on a fourth down conversion from the 13-yard line.

The Bucs got stomped by the Dolphins, but at least their first-team offense and defense both looked competent.

The Dolphins suffered a couple of injuries during the game, with running back Marcus Thigpen being forced from the contest with a hamstring injury and Terrence Fede limping off the field late.  Thigpen is on the bubble to make the roster this year, so a lengthy absence could be a problem for him (as could the offsides penalty on a kickoff which was called on him during the game).  Fede, who had a fumble recovery and a sack on the night, appeared to just have a minor leg issue, and seemed to be walking better as he got toward the sideline, shaking out whatever was the issue.

The game did not answer a lot of the questions still lingering around the Dolphins.  The running game was still non-existent for Miami, tackling was better but not great, and the offensive line struggled, particularly Dallas Thomas with Gerald McCoy.  At the same time, however, Tannehill still looks sharp, making good decisions and getting the ball out quickly.  He was sacked one time, but that was the line allowing McCoy through, and not due to holding the ball too long; though Tannehill does need to protect the ball in that situation.

The Dolphins will officially break training camp tomorrow, then return to the practice field on Monday on a regular season practice schedule.  Those practices will be closed to the public, but media will be allowed to view the early portions of the workouts.

Miami hosts the Dallas Cowboys in Week 3 of the Preseason, with kickoff next Saturday at 7pm ET.