Where is Dion Jordan's Best Fit? Part 1: SAM Linebacker in a 4-3 Under

A look into how Miami Dolphins' DE Dion Jordan would fit into the strongside linebacker role in a 4-3 Under system. While a position switch for Jordan is simply speculation/fantasy at this point, it's not impossible that it could happen given the circumstances and potential.

Share All sharing options for: Where is Dion Jordan's Best Fit? Part 1: SAM Linebacker in a 4-3 Under

There has been much controversy, both internally and externally, regarding the Miami Dolphins' 2013 first round pick, Dion Jordan. After a lackluster, injury-marred rookie season, some fans believe Jordan is precariously walking on the edge of the bust pit being one bad season away from falling in.

Those fans' argumentative fire was fueled by a four-game suspension handed to down to Jordan for PED use and a vanilla showing in his first preseason game of 2014. Some have even gone as far to say that Jordan doesn't belong in the NFL (which is one of the most ridiculous and premature things I have ever heard).

The rest of the slightly more educated group (no offense to all of you impulsive fans) see that Jordan has an rare talent that translates to potential to terrorize offenses if used correctly.

When you reject the bang-your-head-on-a-wall argument about whether Jordan belongs in the league, you get to witness the real debate about Jordan take a thought-provoking turn.

Where is Dion Jordan's best fit? At which position could Jordan get on the field, showcase his talents and impact games?

Born from this debate was the idea to highlight each position where Jordan could possibly fit and wreak havoc on opposing offenses in various ways. In part one of "Where is Dion Jordan's Best Fit", we will look at how Jordan fits as a strongside linebacker in a 4-3 Under defense.

Keep in mind that in the ever-growing world of sub packages in the NFL, Jordan would only be in this position when the Dolphins are in a base formation.

Jordan, in my opinion, fits best as a strongside, or SAM, linebacker in hybrid defensive scheme called the "4-3 Under", a scheme which Dolphins DC Kevin Coyle implements into his gameplan from time-to-time.

The Dolphins' deep defensive end group contributes to the growing argument that Dion Jordan would be best utilized in a linebacker role. That deep defensive line would also undoubtedly make Jordan's position switch, and duties as a linebacker for that matter, much easier.

In a 4-3 Under defense, the Dolphins would be able to get Jordan, Cameron Wake and Olivier Vernon on the field at the same time in the base defense.

In order to move Jordan to this position, Coyle would have to make some changes to his defense, mainly making the "Under" package his base defense. Coaching is about putting your players in the best position to succeed and making the unit that you control the best that it can possibly be, so this schematic shift isn't out of the question by any means, especially considering the Dolphins already use it at times. 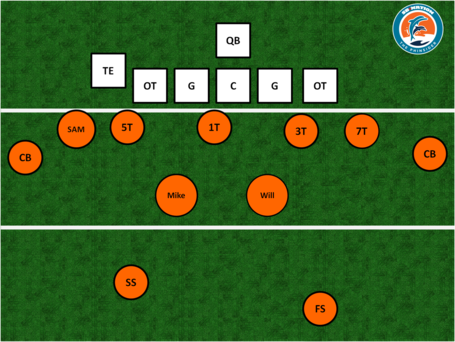 In the picture above you can see the details of a 4-3 Under defense (sometimes called a 5-2 defense). In the 4-3 Under, the defense line shifts towards the weakside of the offensive formation and the linebackers shift towards the strongside (generally the side with more blockers, usually a tight end). The formation is called "under" because the nose tackle is lined up at the 1-technique on the inside (or "under") shoulder of the strong side guard pre-snap. A safety sometimes drops down to weak side of the formation to load the box with eight defenders.

In a 4-3 Under, the Sam linebacker lines up either directly over the tight end or on the tight end's outside shoulder in a two-point stance. Being in this spot would put Jordan in a position to harass tight ends (whether by jamming them at the line or blanketing them in coverage) on every play. Many Dolphin fans are itching to see Jordan resume this role after the success he had against New England Patriots tight end Rob Gronkowski in Week 8 of the 2013 season.

Jordan, now reportedly up to 275 pounds, would, ironically, need to cut a small amount of weight to assume the role of shadowing tight ends. Jordan would be a force at Sam at his current weight, but unless he proves that his movements aren't slowed in any way, which isn't likely, he would benefit from leaning up his body and playing around 260 to maximize his versatility.

Coyle could also have plays designed for Jordan to attack the line of scrimmage around the outside edge of the defense. Using Jordan and Cameron Wake/Olivier Vernon (depending which side was the strong side) as a pass rushing duo would be lethal on any tackle/tight end combination trying to block the two.

The stunts that Coyle would be able to create with Jordan at Sam would make his defense and blitz packages terrifying. The outside speed rush of Wake by itself creates a tremendous amount of stress on a tackle; stunting Jordan around the wide rush of Wake in the gap created between the right tackle and right guard would create easy sacks.

Jordan's work as a defensive end should prepare him for the engagements that he would face in this new position (in fact, you'd expect Jordan to win at least 8 out of 10 times when locking horns with a tight end).

Jordan would be especially intriguing in this position because he has the ability to shadow tight ends all over the field, something he would be able to showcase when lining up over the tight end every play.

One of the best things about this move, aside from providing some change to the linebacking corps, moving Dannell Ellerbe back to the position he thrived in with the Baltimore Ravens and getting the best players on the field at the same time, is the versatility the formation would have.

Jordan, who was said to look like a "mutant nickel cornerback" by some in his days at Oregon, has a skill set to be able to jam slot receivers at the line and play some man coverage, and the length and athleticism to adequately cover zones.

This new formation would allow the Dolphins to keep themselves from getting burned by no-huddle offenses who's up-tempo pace prevents substitutions, because Jordan (if he drops a little bit of his illegally-gained weight) would have the ability to play as an ace in the hole in the slot area who is strong pass coverage, run defense and rushing the passer.

When categorized as a linebacker, Jordan becomes one of the Dolphins' most versatile players on his respective unit (Nate Garner, Jared Odrick and Jimmy Wilson would all challenge for the top spot).

Jordan has put on about 30 pounds from his days at Oregon when he was flying all over the field in his unique position amongst that defense. Jordan undoubtedly loses some lateral quickness and agility with that weight, but he is still an athletic freak who could thrive in this new role.

This formation does have it's downsides though. The way the linebackers are shifted leaves the weakside of the formation susceptible to huge runs if every man doesn't follow his assignment correctly and win against his offensive lineman. In other words, the strongside is very strong, but the weakside is troublingly weak.

I also think that Olivier Vernon and Chris McCain (who I saw assume this role most frequently in the Dolphins' first preseason game, though he is probably not ready to start) have potential to produce good play at the SAM if the Dolphins wanted to practice or play this defense while Jordan is suspended.

Now that I've hopefully sparked your interest in the debate about Jordan's position, I am looking forward to hearing all of your thoughts how you feel about Jordan's potential in this spot or on where you would like to see him utilized.