Dolphins roster projection: An early attempt to cut to 53

An attempt to predict the Miami Dolphins 53-man roster, prior to the club's second preseason game.

Share All sharing options for: Dolphins roster projection: An early attempt to cut to 53

As the Miami Dolphins prepare to face the Tampa Bay Buccaneers this weeked in Week 2 of the 2014 NFL Preseason, the coaches and front office have to also be considering what players from the current 90-man roster will fit on the roster once the NFL's 53-man limit begins.  Yesterday, we took a look at the roster from the simple terms of roster locks, near guarantees, depth, bubble, and camp bodies categories.  Today, we try to build a true 53-man roster.

As you check this out, you should notice I have already made some adjustments to my thinking from yesterday's post (i.e., some "near guarantees" may be off the roster while a "depth" or "bubble" player makes it).  I also had to consider how many players for each position, which changes up some of the slots as well.

In the end, I wind up with 25 offensive players, 25 defensive players, and 3 specialists.  It was not an intentional evening out between the offense and defense, it just seemed to happen.

Let's take a closer look at the roster: 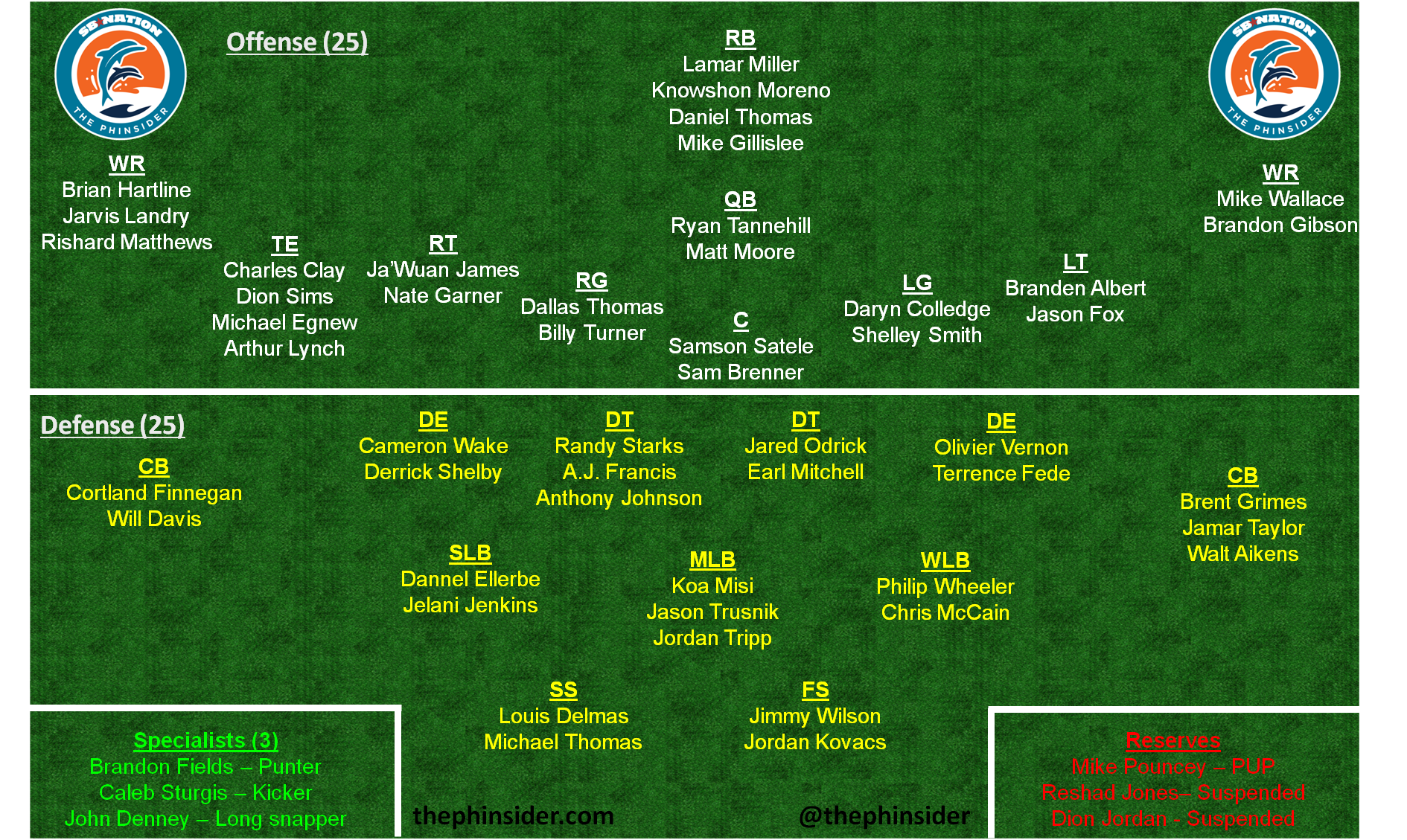 Quarterbacks (2) - With the release of Pat Devlin this week, the Dolphins looked poised to start the season with only two passers on the roster: Ryan Tannehill and Matt Moore.  Brady Quinn is the wildcard in this decision, while Seth Lobato could land on the practice squad if Miami thinks they can develop him into a serviceable backup.

Running backs (4) - The surprise here is Daniel Thomas still being on the roster.  At this point, I think Miami does look to keep him.  I would not be surprised if Orleans Darkwa or Damien Williams passes him at some point in training camp, but for now, I have a backfield with Lamar Miller starting, Knowshon Moreno backing him up, and Thomas and Mike Gillislee serving behind them.

Wide receivers (5) - Here is one of those changes mentioned above, where Armon Binns falls off the roster and Rishard Matthews makes the squad.  Matthews has been effective in camp thus far, and should be given the benefit of the doubt.  Brian Hartline, Mike Wallace, Jarvis Landry, and Brandon Gibson will make up the bulk of the receiving duties.  The position assumes some risk as the team only carries five wideouts in this scenario, but I needed the position originally given to Binns, so he lost his job.

Tight Ends (4) - Another semi-surprise, the Dolphins come out with four tight ends on their roster, nearly as many as the wid receivers.  Charles Clay is obviously a lock and Dion Sims seems to be growing into his role as an in-line blocker, though he does need to continue to work on his receiving skills.  A lot of people have given up on Michael Egnew, though I would not be surprised to see him thrive in Bill Lazor's offense.  Arthur Lynch makes the roster as a developmental project that might need to protection of being on the roster rather than on the practice squad.

Offensive line (10) - The Miami offensive line will likely feature five new starters when opening day arrives (though the injure Mike Pouncey is trying to find a way to get back in time).  The starters seem to be locking themselves in fairly well at this point; left tackle Branden Albert, legt guard Daryn Colledge, center Samson Satele, right guard Dallas Thomas, and right tackle Ja'Wuan James.  It would not be a surprise if Thomas continues to get pushed by Billy Turner, Nate Garner, or Shelley Smith for the top spot on the depth chart, but it seems as though it is Thomas' position to lose.  Sam Brenner makes the roster to backup Satele as the team awaits Pouncey's return, and Jason Fox hits the roster because the Dolphins do not have a lot of tackle depth.  Most of the second string players could move around to other positions if needed, so do not read too much into who is behind whom.

Defensive end (4) - I really wanted to keep five defensive ends, but simply could not find a way.  Cameron Wake and Olivier Vernon are the clear starters, while Derrick Shelby and Terrence Fede back them.  Fede has been impressive in training camp and the first preseason game, so even when Dion Jordan gets back from his suspension, the team will likely look to find a way to keep him on the roster.

Defensive tackle (5) - Where the defensive end position is a little light in terms of number of players kept, the defensive tackle position feels about right.  You could argue that keeping Anthony Johnson is a luxury at this point, which would open up a position at either defensive end or wide receiver, but he provides the tem much needed depth up front.  Randy Starks, Jared Odrick, and Earl Mitchell will for some combination of the two starting positions, while A.J. Francis and Johnson take on the backup roles.

Linebackers (7) - Dannell Ellerbe, Koa Misi, and Philip Wheeler will likely be the starters, unless Jelani Jenkins, Jordan Tripp, or Chris McCain can over take them on the depth chart.  McCain has been one of the most notable players during training camp, and seems to be positioning himself for a run at the roster.  How the Dolphins use Jason Trusnik, who is a special teams ace for the squad, will be interesting - he could go from a second string player to out of a job if others can replace him.

Cornerbacks (5) - Keeping only five cornerbacks is worrisome on the surface, but it should be fine.  If needed, some of the safeties can slide into a cornerback position.  The Dolphins can, therefore, take a little risk and only carry Brent Grimes, Cortland Finnegan, Jamar Taylor, Willi Davis, and Walt Aikens.  If there is some way to slide Jalil Brown onto the roster, he could add to the depth at the position.

Safeties (4) - The Reshad Jones suspension messes with the ability of the team to provide cornerbacks and safeties at the same time.  Just like the cornerback position, however, the flexibility of some of the defensive backs to play multiple positions could be the answer Miami needs until Jones gets back.  Right now, the starting safeties appear to be Louis Delmas and Jimmy Wilson, with Michael Thomas and Jordan Kovacs mixed in there.  Don Jones was one of the last players cut to make the 53-man roster in this scenario, and he could be in the running to claim a spot.  Walt Aikens, listed as a cornerback here, has been working as a safety as well, which could impact how many safeties are kept.

There really is not a lot to say about the specialists.  Brandon Fields will be the punter and John Denney will be the long snapper.  The only question mark is at the kicker position, which should be Caleb Sturgis' spot, unless the injury that has caused him to miss practices as of late, and led to the signing of Danny Hrapmann before the first preseason game is something serious.

Miami will have two players start the season on the suspended list: safety Reshad Jones and defensive end Dion Jordan.  How the team adjusts the roster when they are activated after Week 4 will be something to watch a month into the regular season.  Center Mike Pouncey could also sit out the first part of the season if the hip surgery he had to repair a torn labrum keeps him on the Physically Unable to Perform list; he would be eligible to return after Week 6 of the season.

The Dolphins will play two more preseason games, this Saturday at the Tampa Bay Buccaneers (August 16, 7:30pm ET) and next Saturday, home against the Dallas Cowboys (August 23, 7pm ET).  The first set of roster cuts begin after the Cowboys contest, with all NFL teams required to move from 90-man roster limit to a 75-man limit by 4pm ET on August 26.

Miami will then play their last preseason game, hosting the St. Louis Rams in Preseason Week 4 (August 28, 7pm ET), before the final round of roster cuts.  All teams will have to reduce their rosters from 75-players to the regular season limit of a 53-man roster.