This is a re-post of a segment of an earlier article I wrote that discusses specifically the roles of linebackers in the 4-3 defense the Dolphins' defensive coordinator runs.

Brief Overview of the 4-3 Linebacker Roles: 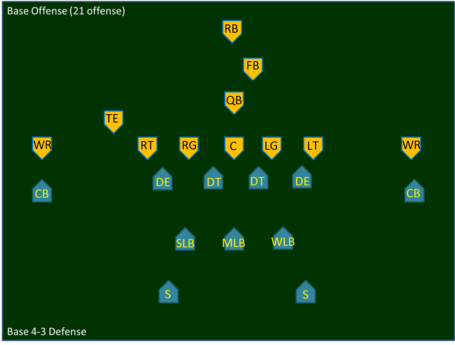 The following role descriptions only apply when the Dolphins are in their "base" 4-3 defense, which the Dolphins use when they expect a running play. The Dolphins' favored pass defense is the "nickel" package, which is when the defense adds a fifth defensive back - hence the term "nickel" - while removing a linebacker off the field. In Coyle's nickel package, the two linebackers who stay on the field either blitz or drop into coverage, with no clear difference in their roles.

Middle Linebacker ("Mike") - The MLB typically plays the role of "quarterback of the defense," with Zach Thomas being the obvious "prototype" for Dolphins fans to keep in mind. MLBs generally accumulate impressive tackle totals because they're in position to play a primary role in stopping most running plays. Therefore, it's important for the MLB to be a sure tackler capable of making plays all over the field.

As for the role in pass coverage, the middle linebacker's main responsibility varies depending on scheme. In Kevin Coyle's scheme, the Dolphins' MLB (first Karlos Dansby in 2012 and then Ellerbe in 2013) has generally been asked to cover running backs while in the base defense.

Strongside Linebacker ("Sam") - The outside linebacker who lines up across from the tight end is called the "strongside" linebacker. Back in the "good old days," when tight ends were big and mostly used as blockers, the linebacker lining up opposite the tight end could expect a lot of running plays to come his way, so it was important for him to be big and strong enough to play against the run and take on blockers, while also being able to cover lumbering, blocking tight ends on generally shorter routes.

In Kevin Coyle's system, Koa Misi has been the Sam in 2012 and 2013, and he would've been a perfect fit 20 years ago for the position because he's an excellent run defender who is physical and doesn't shy away from blocks. However, as the NFL has become more of a passing league, blocking has become less important for tight ends than being a "mismatch" in the passing game against linebackers like Misi. The Sam has traditionally been asked to cover the tight end, and that's gotten a lot harder with athletic tight ends like Rob Gronkowski and Vernon Davis posing matchup issues against linebackers in the passing game when lined up in-line. The best modern strongside linebackers are good in coverage, and asking Misi to cover tight ends or undersized "H-backs" has not appealed to Coyle, who has asked Misi to come off the field on passing downs. Misi is then replaced as part of the "nickel" package with an extra defensive back such as CB/FS Jimmy Wilson. The Dolphins' defense faces around 600 passing plays per year, but Misi the past 2 seasons has only been asked to drop into coverage just 165 and 160 times, respectively. For the other 400+ passing plays, he's either been off the field or rushing the passer.

Weakside Linebacker ("Will") - The Weakside linebacker plays on the side without the tight end, leaving him free to blitz the QB or make plays in space, such as against screens. On passing plays, the Will is either blitzing or matched up against tight ends (ex. in 2-TE sets) or wide receivers lined up in the slot. Of all the linebackers, the Will is the most likely to be matched up against wide receivers on passing plays if there aren't enough cornerbacks to cover each receiver, so the ability to drop into coverage has always been a top priority for the position. Therefore, Weakside linebackers tend to be the best pure athletes in the linebacker rotation. Kevin Burnett in 2012 and Phillip Wheeler in 2013 have been the Dolphins' weakside linebackers the past 2 years. Wheeler struggled mightily in coverage in 2013, regularly giving up receptions as well as being penalized, suggesting that he's not a good fit for that linebacker spot. Additionally, 2014 5th round pick Jordan Tripp has been described as a natural fit for the Will position due to his athleticism, and he has been getting 2nd-team reps at the Will position so far in the 2014 offseason.