A look back at the longest run of 2013 for Miami Dolphins running back Lamar Miller.

Share All sharing options for: Lamar Miller 49-yard run: Breaking down the tape

In 2013, the Miami Dolphins occasionally ran the ball.  Most of the time with quarterback Ryan Tannehill starting the play with the now infamous, "Go-Go" cadence.  Starting running back Lamar Miller gained 709 yards on 177 attempts during the season, including 49 of them on one Week 3 carry.

In that game, against the Atlanta Falcons, Miller only carried the ball eight times, though the Dolphins as a team only had 15 rushing attempts.  Again, the Dolphins occasionally ran the ball.

During the season, unfortunately, we were not able to do our tape breakdowns like we did in 2012.  My goal this year is to fix that issue and get back to look at the anatomy of plays each week.  There's not better time than the present, so this morning, we take a look back at that 49-yard run from Lamar Miller. 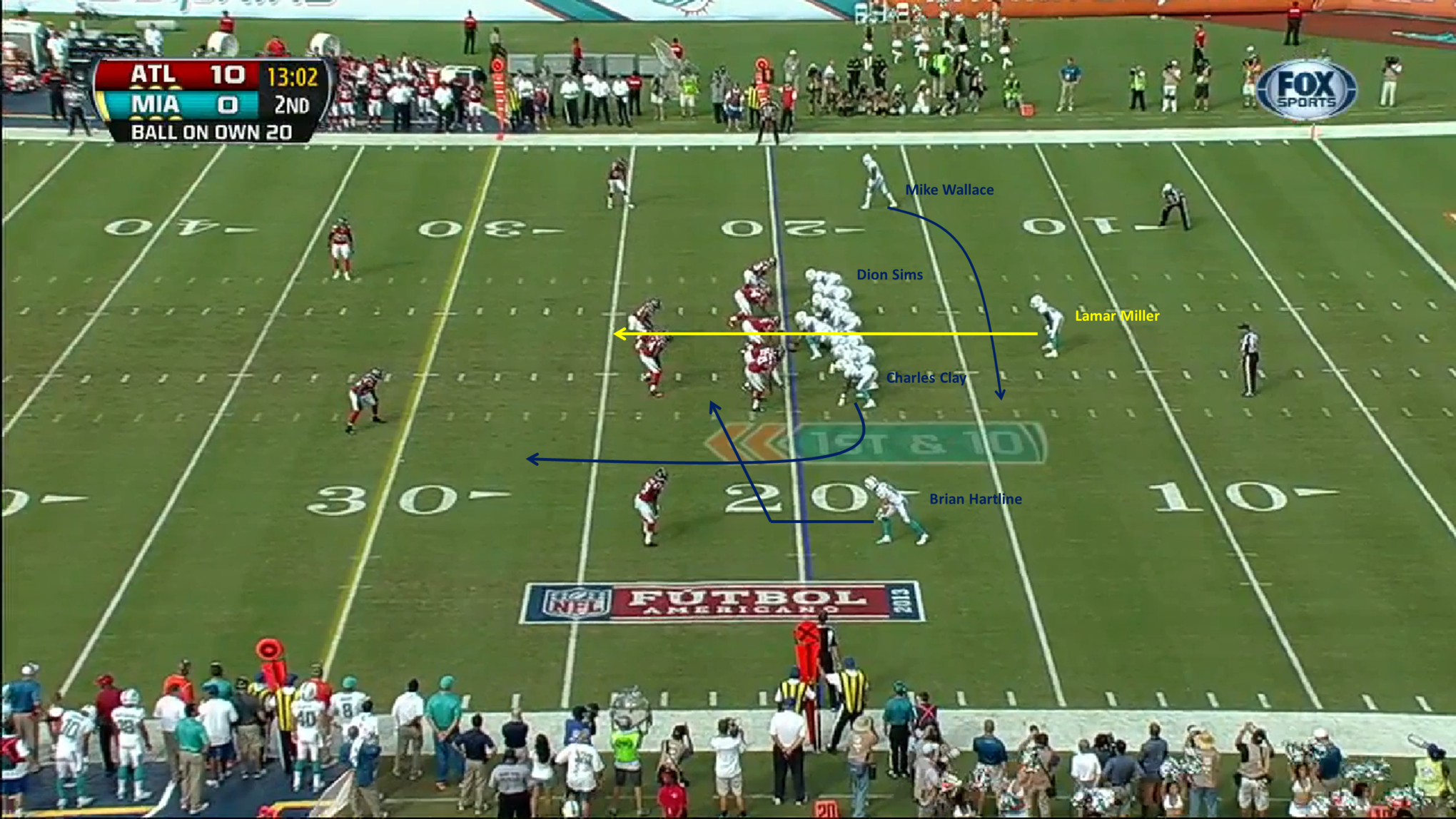 The play is a simple run almost straight up the middle of the offensive line.  The design actually has the line sliding to the right a little, so while Miller is hitting the gap between center Mike Pouncey and left guard Richie Incognito, it's a gap that will appear about where right guard John Jerry is lined up before the snap.

The play design is actually really well done and works perfectly in this instance.  Wide receiver Mike Wallace will go in motion, seeming to start a sweep from the right side of the offensive around to the left.  At the snap, fellow receiver Brian Hartline will run a slant across the middle, crossing behind tight end Charles Clay, initially lined up to the left of left tackle Jonathan Martin.  Clay is going to leak out away from the line before turning up field.

On the opposite side of the line from Clay, rookie tight end Dion Sims lines up next to right tackle Tyson Clabo and will serve as an extra blocker for the play. 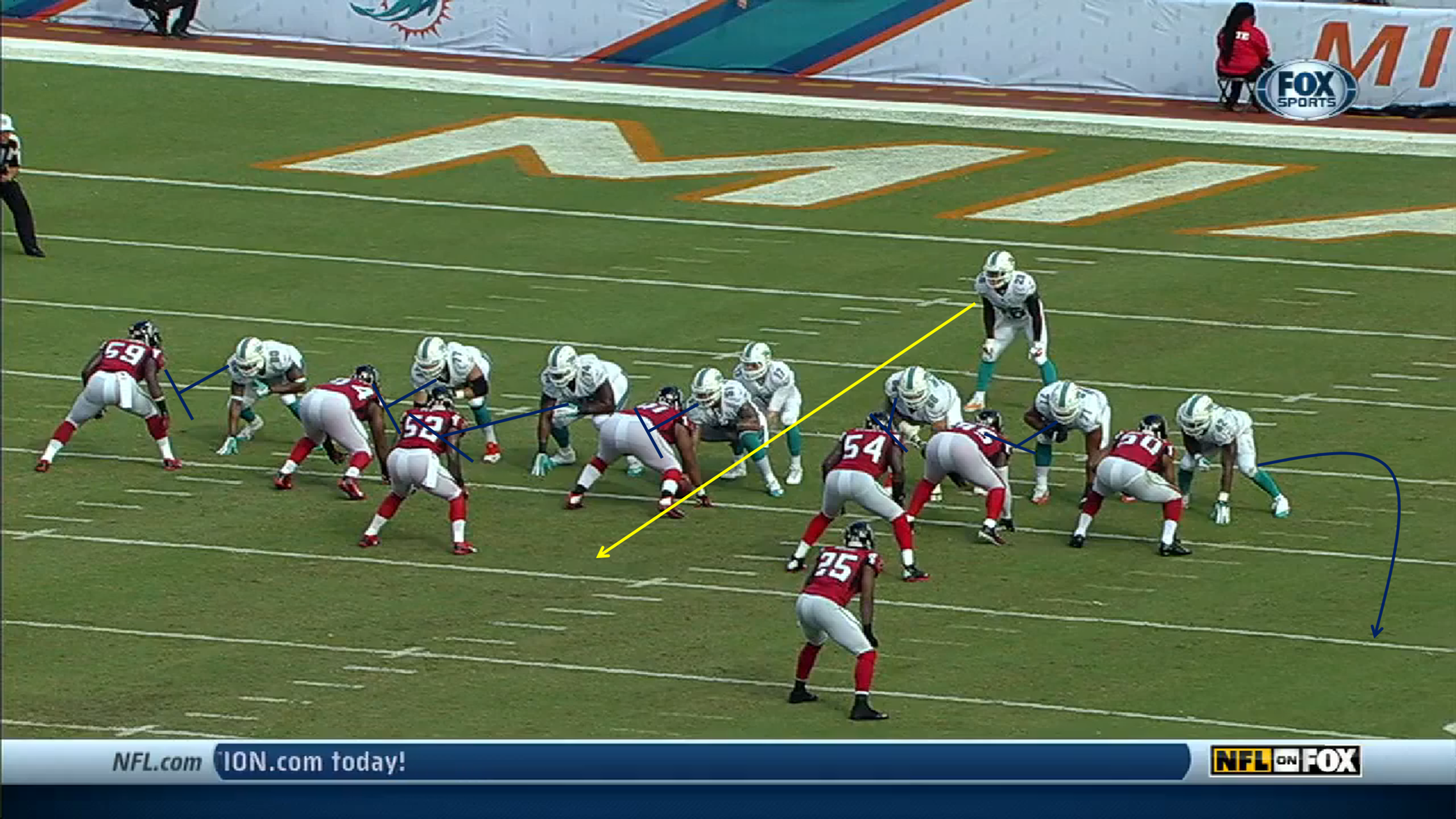 The Dolphins are going to step up and smash the defensive front for the Falcons, with Sims taking on linebacker Joplo Bartu, Jerry responsible for middle linebacker Akeem Dent, and Clay's route pulling outside linebacker Stephen Nicholas out of the middle of the field.

As you will see, when Miller hits the gap between Pouncey and Incognito, the hole will actually be over by the hash marks on the right side of the offensive line, but the yellow arrow still represents where Miller will find his gap. 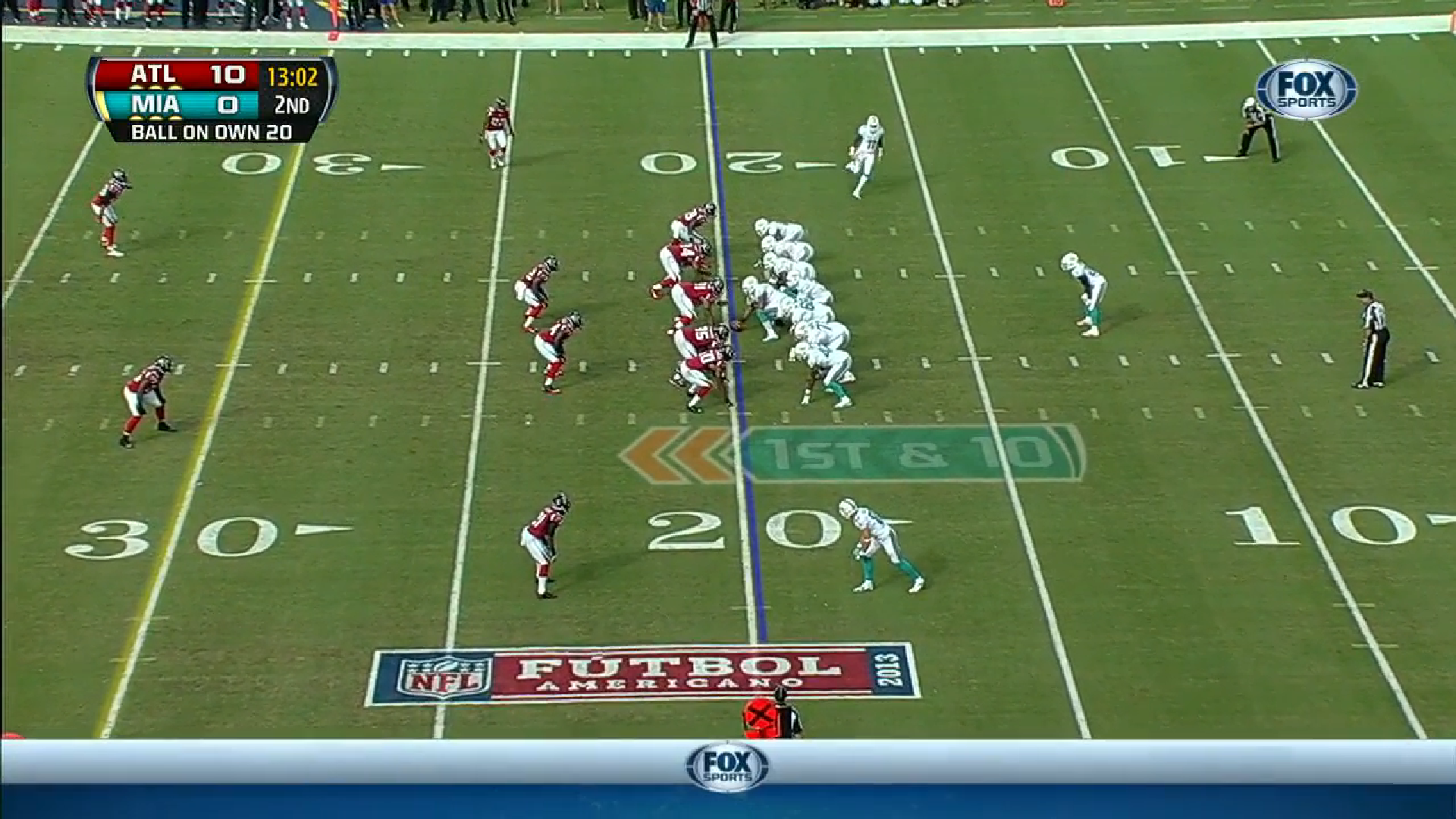 Just prior to the snap, Wallace goes in motion, which will ultimately lead to a hesitation on the part of multiple players from the Falcons, who are trying to read if Miller, Wallace, or Tannehill has the ball. 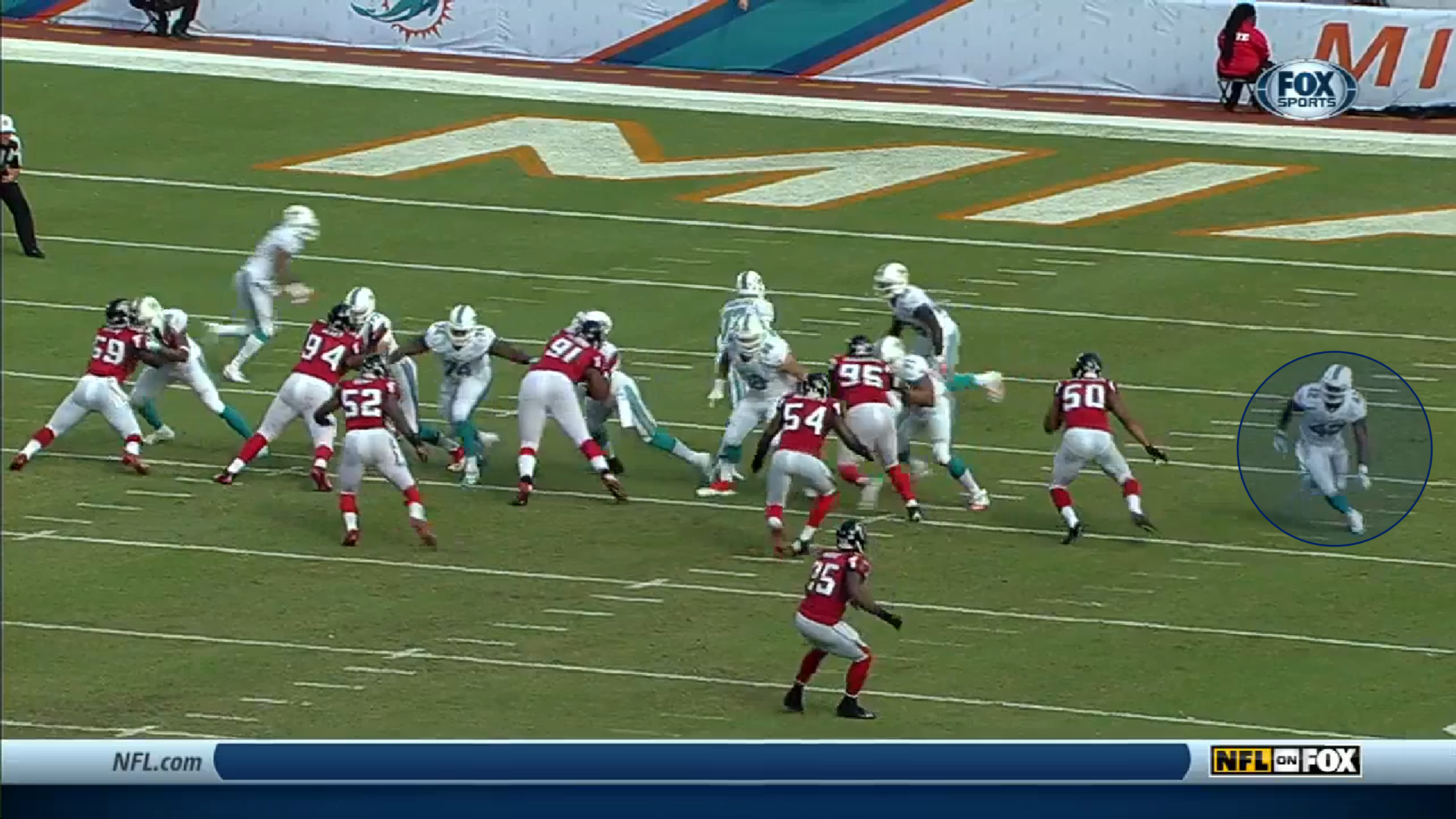 There are two keys - other than effective blocking from the offensive line - to this play. The first is Wallace's feint at the sweep. The second is Clay. As he comes off the line of scrimmage to run his route, he is immediately looking at safety William Moore, deciding what the Falcons' defensive back is going to do. Clay is looking to provide a key down field block for Miller, should he spring out of the backfield, and Moore is the first option. Miller, however, is starting to shadow Clay on his route, which clears out the middle of the field for Miller. 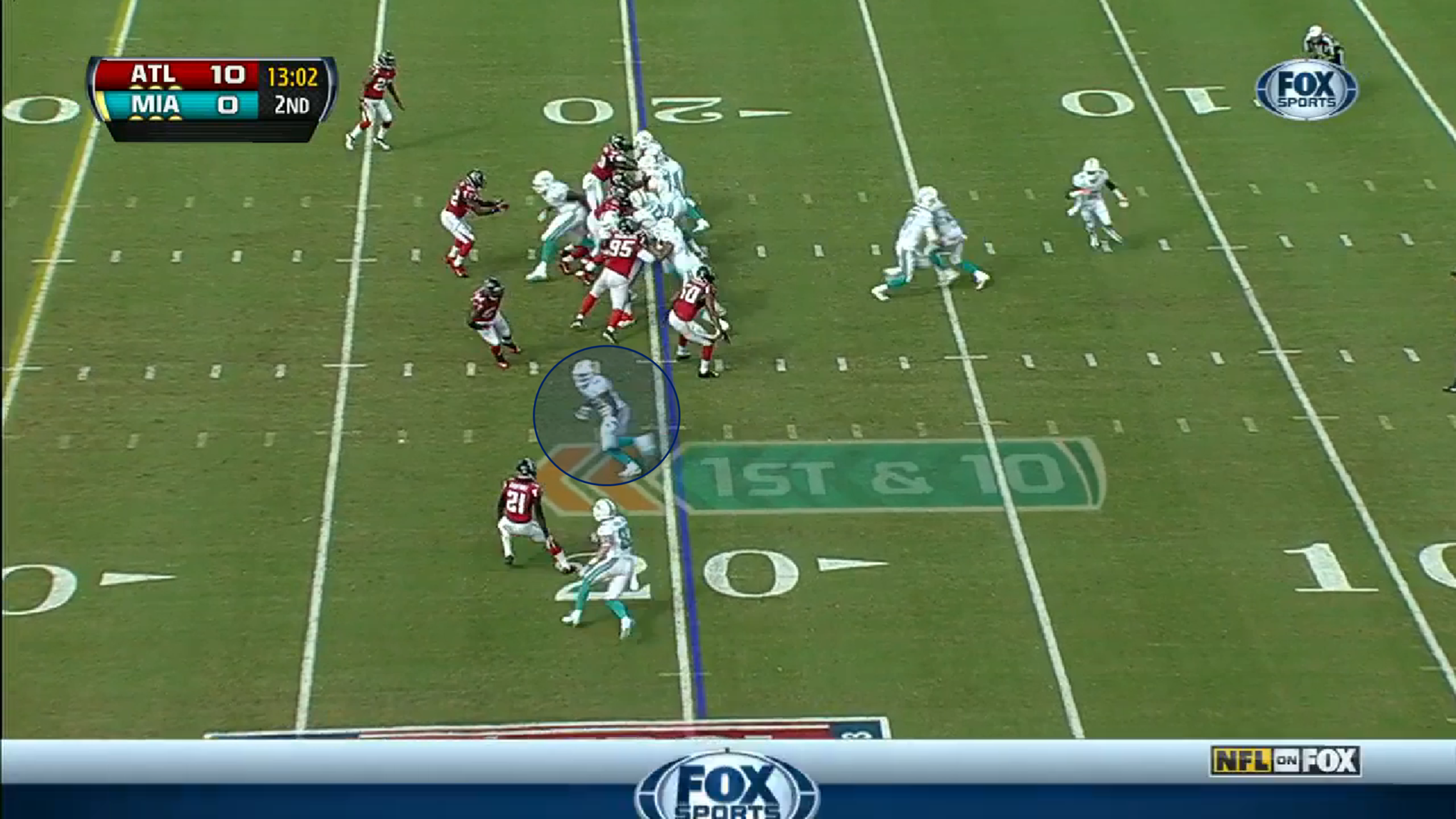 Clay, realizing Moore is not going to be a factor by crashing the offensive line, now turns to look at cornerback Desmond Trufant, ensuring he is not trying to blitz into the backfield from his position covering Hartline. The added bonus here is, Nicholas is not attacking the line of scrimmage, so Incognito is no longer required to block the linebacker, so he turns to help Martin with Jonathan Babineaux. Nicholas, instead, is dropping into coverage on Clay.

We also see the hesitation caused by Wallace starting to come into play in this instant. Osi Umenyiora is coming off the left side of the offensive line completely unblocked, by design, but does not know where to attack. Is the play going to Miller, Wallace, or is it a play action with Tannehill keeping the ball? Umenyiora will react fairly quickly to Miller, but the second of hesitation is enough to let the play pass the defensive end.

Trufant also seems to take a second to make a decision here, trying to figure out if Wallace is going to be carrying the ball toward the cornerback, or, does he need to continue to cover Hartline on the slant route. 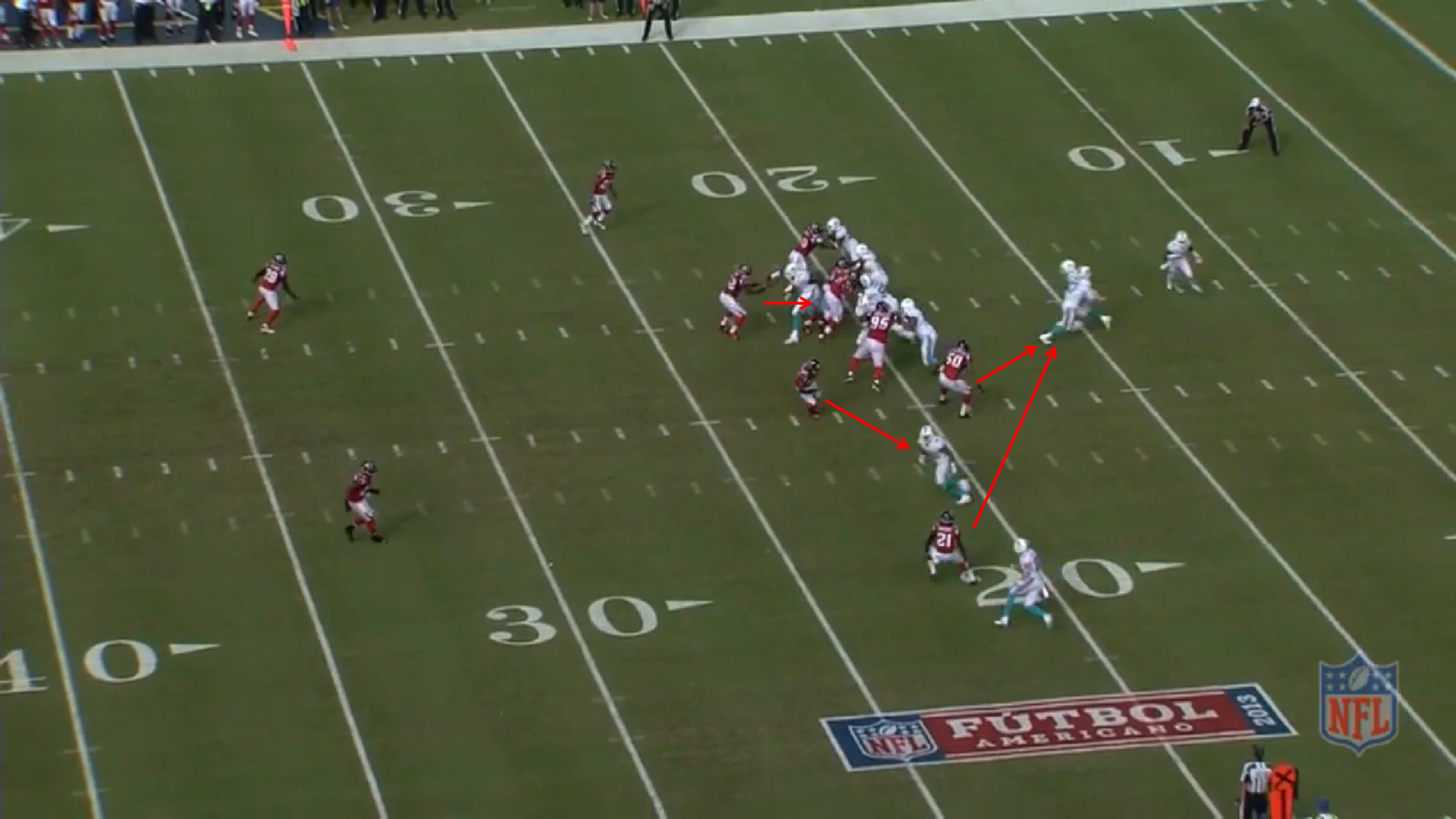 Switching to an All-22 view, the focus of each of the main defenders in the play can be seen. Trufant (21) is in front of Hartline, but is trying to see what is happening in the backfield, making sure he is not needed to make a play on Wallace's sweep. Umenyiora (50) is trying to read the exact same thing from his position on the end of the line of scrimmage.

Nicholas is making his move to cover Clay while Dent, who should be able to fill the gap Miller will be hitting, is about to be engaged by Jerry on the second level, essentially knocking him out of the play. 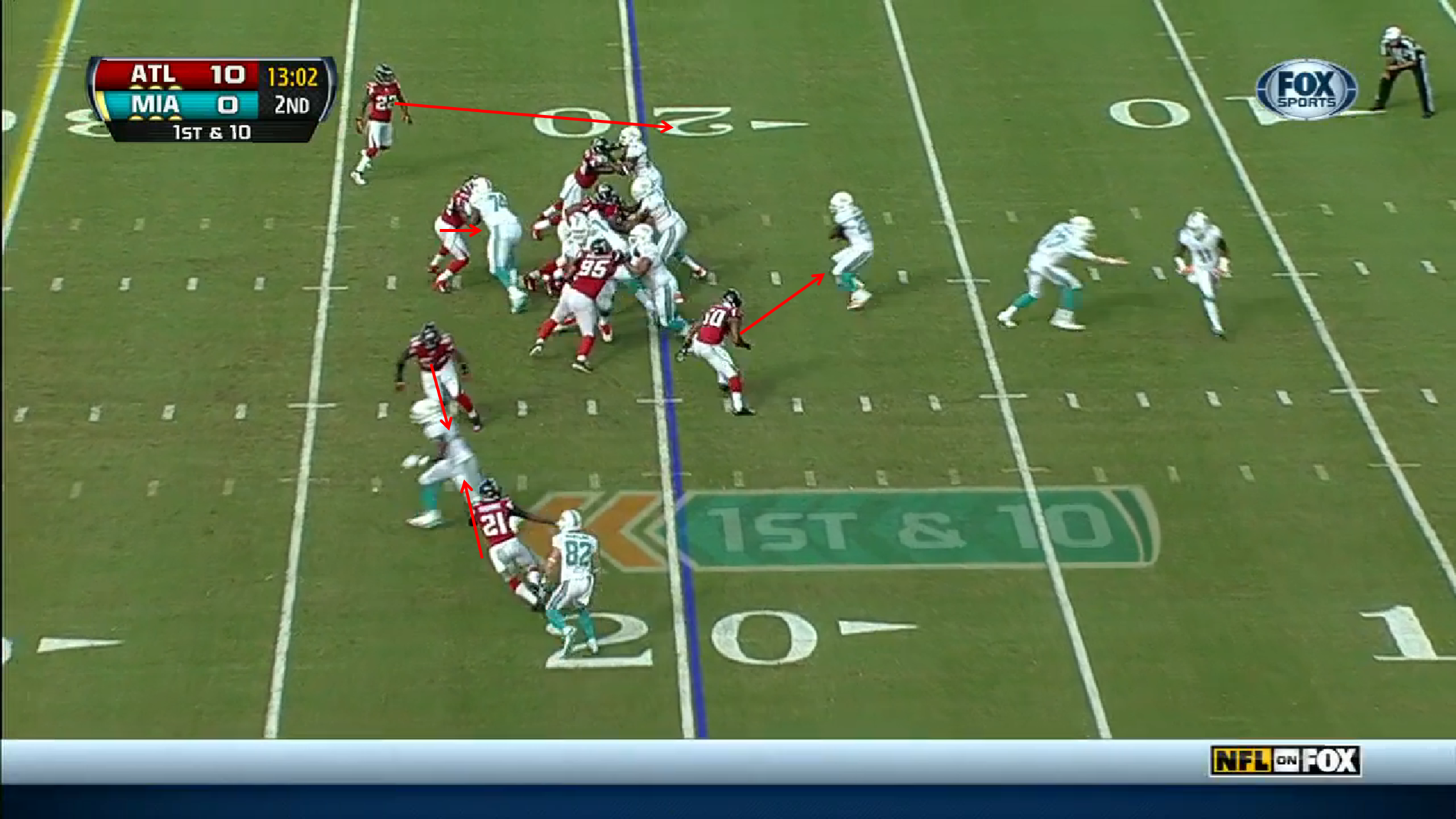 Moving back to the television angle, Umenyiora is now keyed on Miller, but it is too late to make the play. Trufant and Nicholas are both moving away from the play, toward Clay, while Dent is now being pushed out of the way by Jerry. Finally, Asante Samuel (22), who will eventually make the tackle on this play, is doing exactly what he is supposed to do by staying at home, ready to make a play should Miller try to turn the run outside. 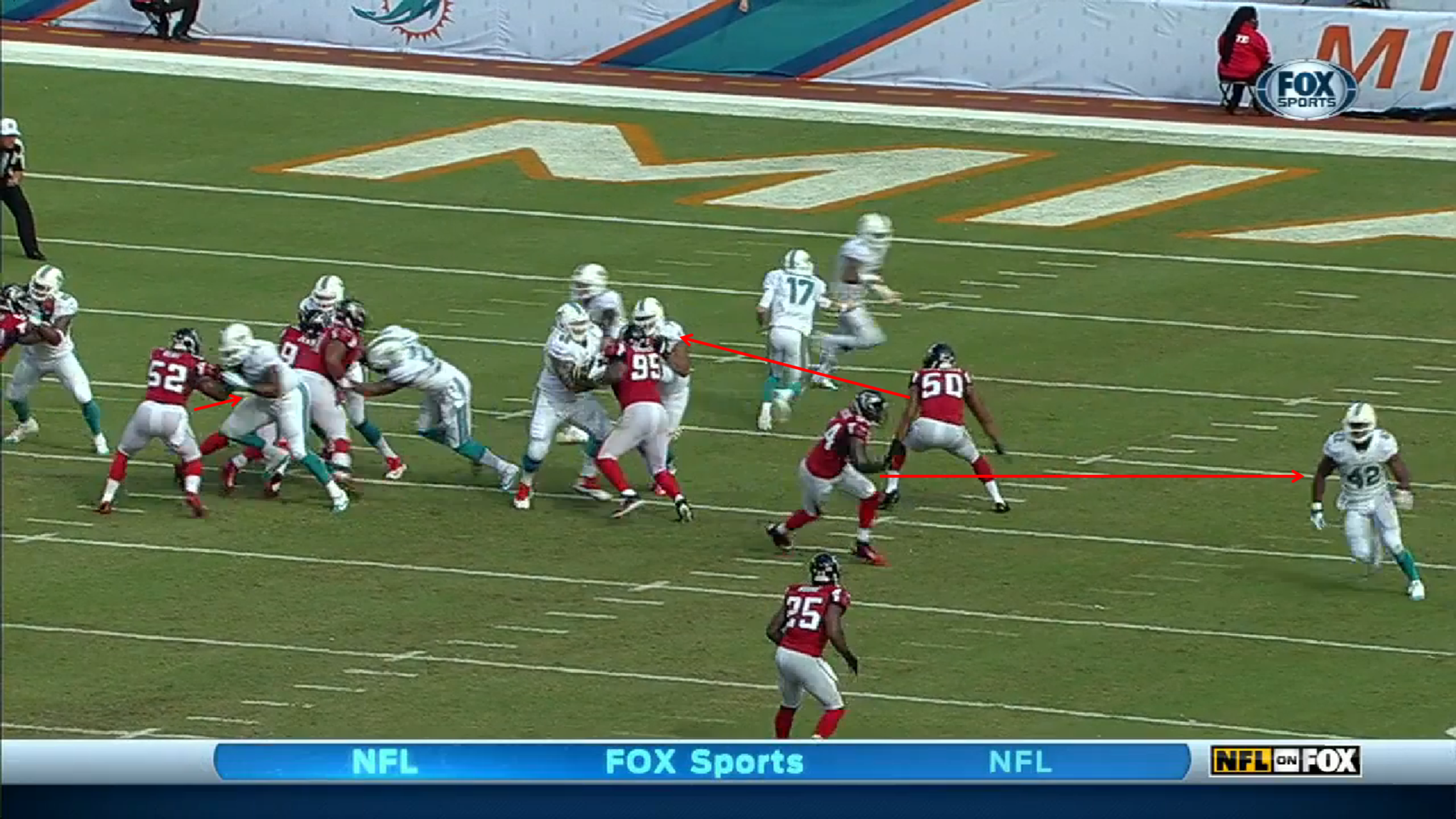 The hole is beginning to open up for Miller, who is attacking exactly where he expects the gap. Umenyiora is starting to react to Miller while Dent is clearly being sealed off by Jerry. Finally, Nicholas covering Clay is pulling him completely away from the play. 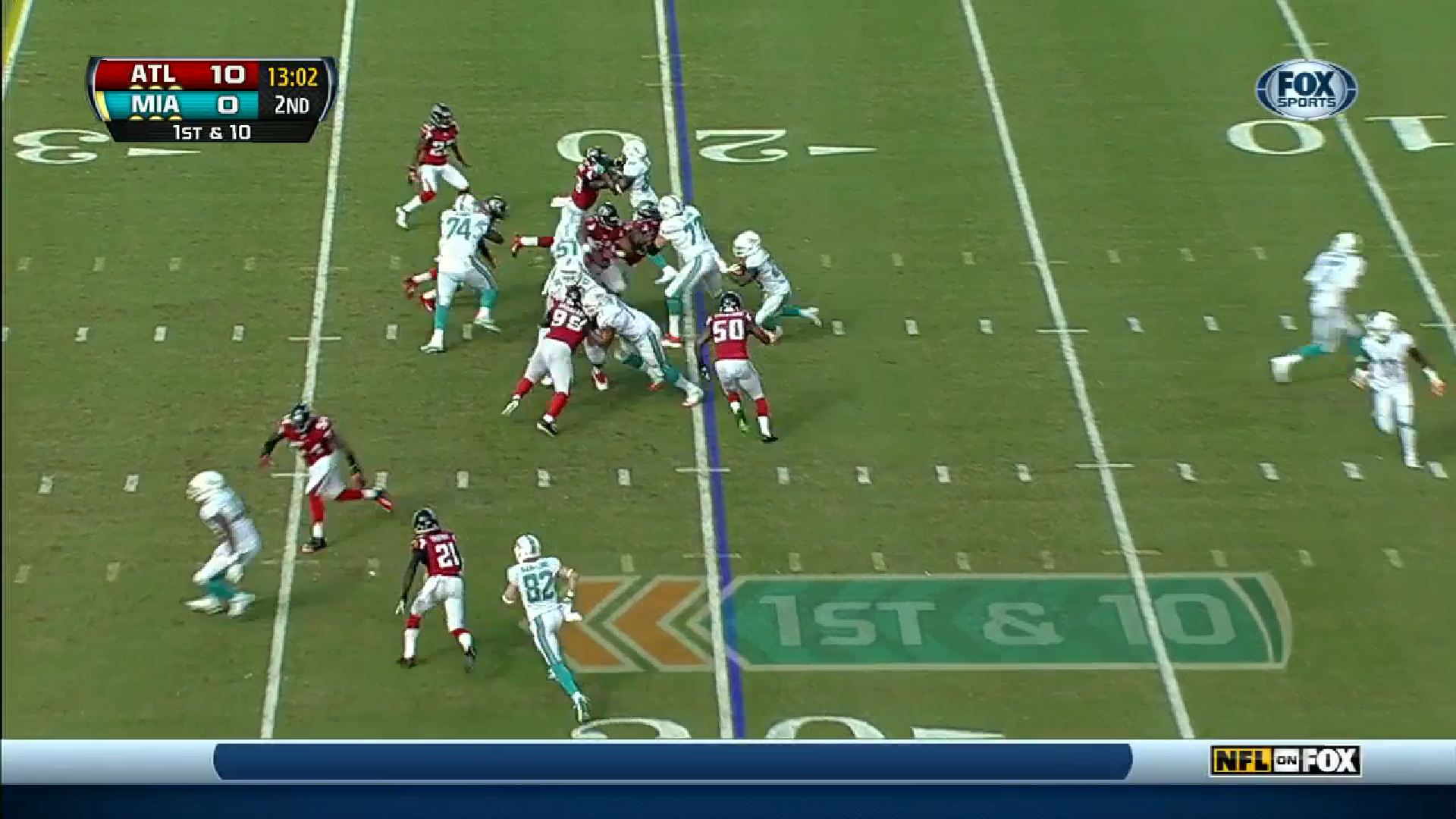 This is the one moment where the play looks like it might not work, as Umenyiora closes in on Miller before the running back is able to get to the line of scrimmage. Miller's speed, however, allows him to get through the hole before Umenyiora can do anything.

Of note, everything up until now (and actually through the next two images) has all taken place in less than a second on the game clock. 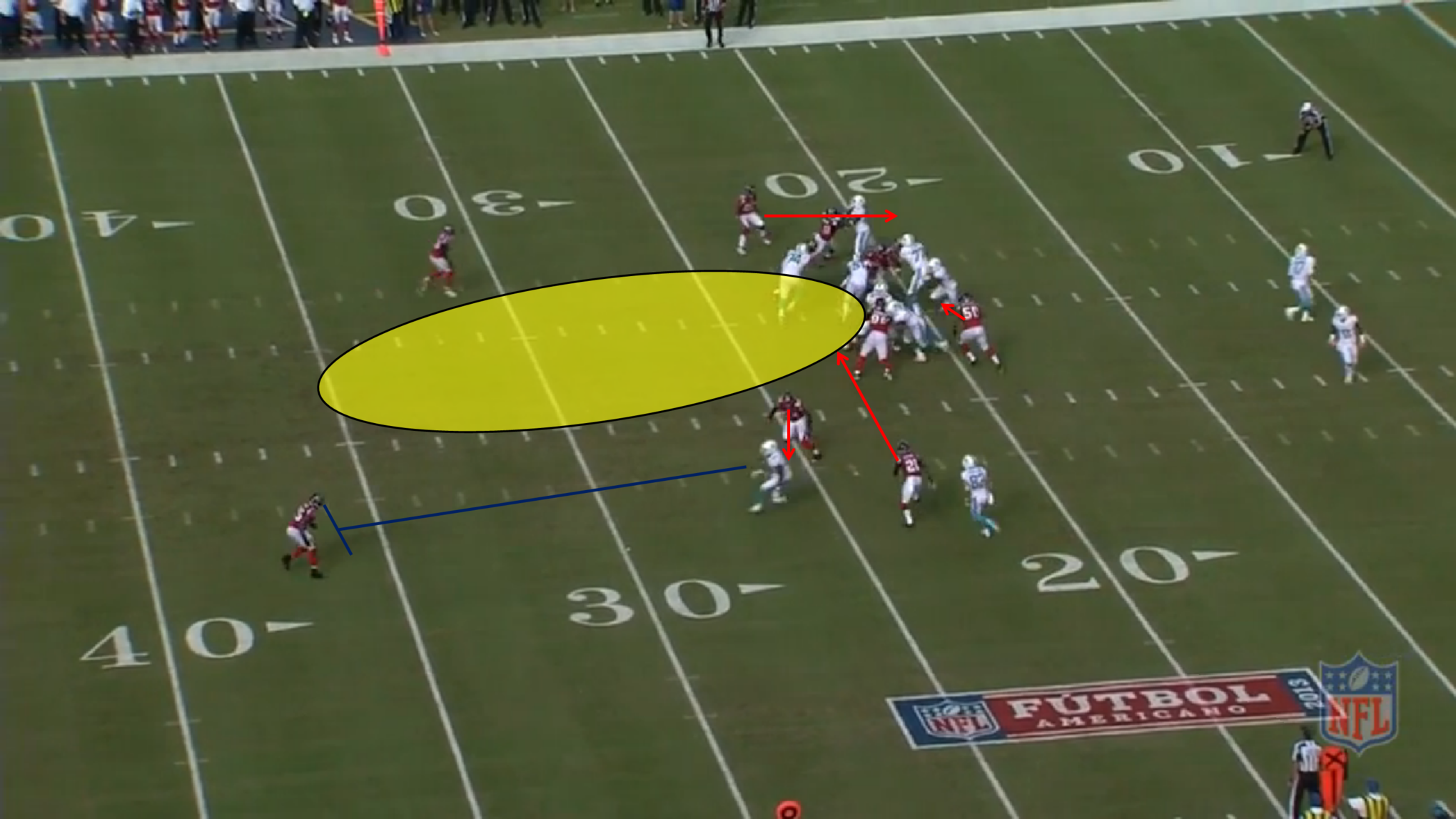 Suddenly, everything is open for Miller. As he passes Umenyiora, the entire middle of the field is open, with just the safeties left in play. Clay at the bottom of the play has pulled Nicholas out of the play and is now moving toward Moore to make the block on the safety. 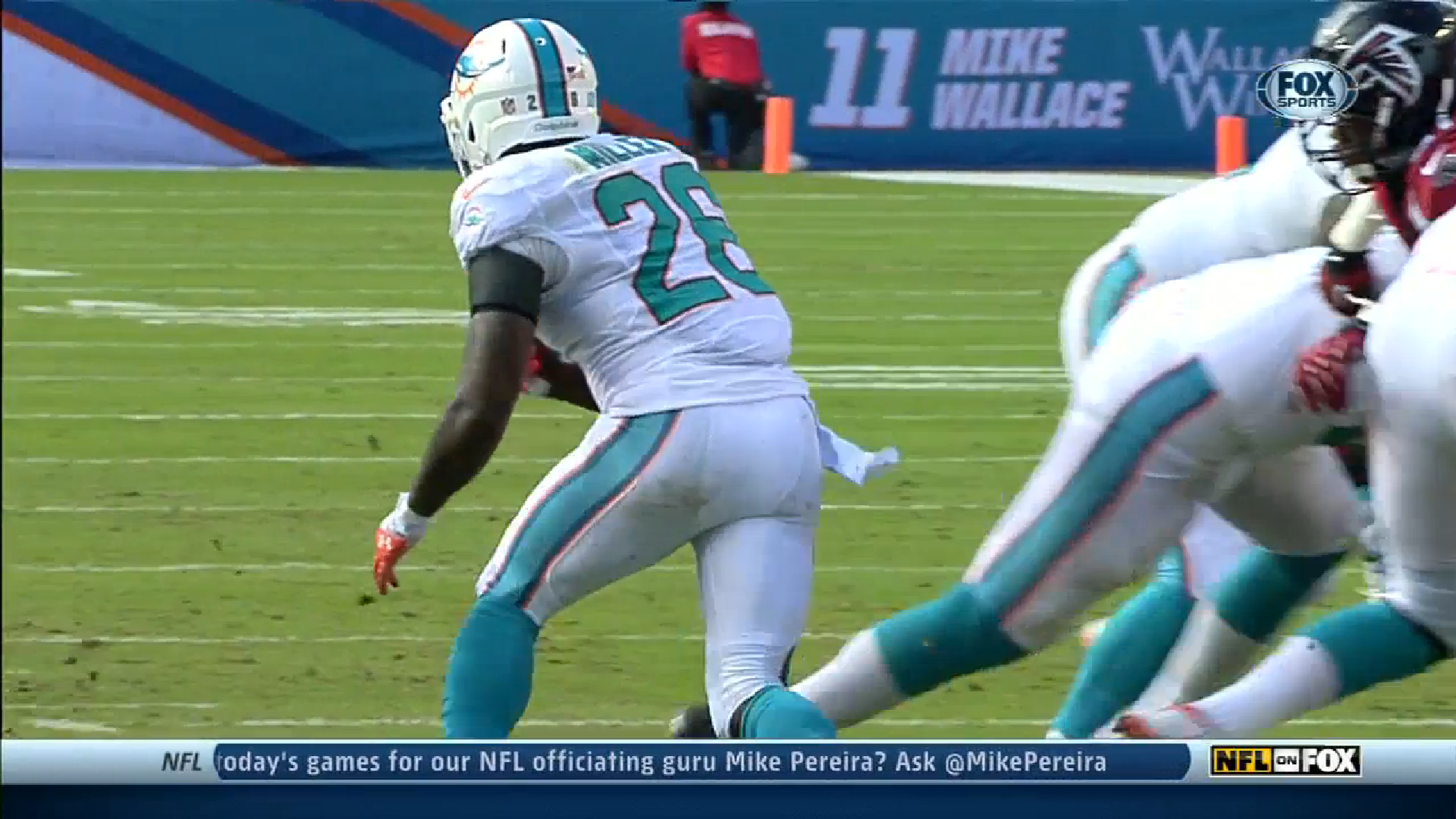 Switching angles, suddenly, Miller sees just how open the field is for him. 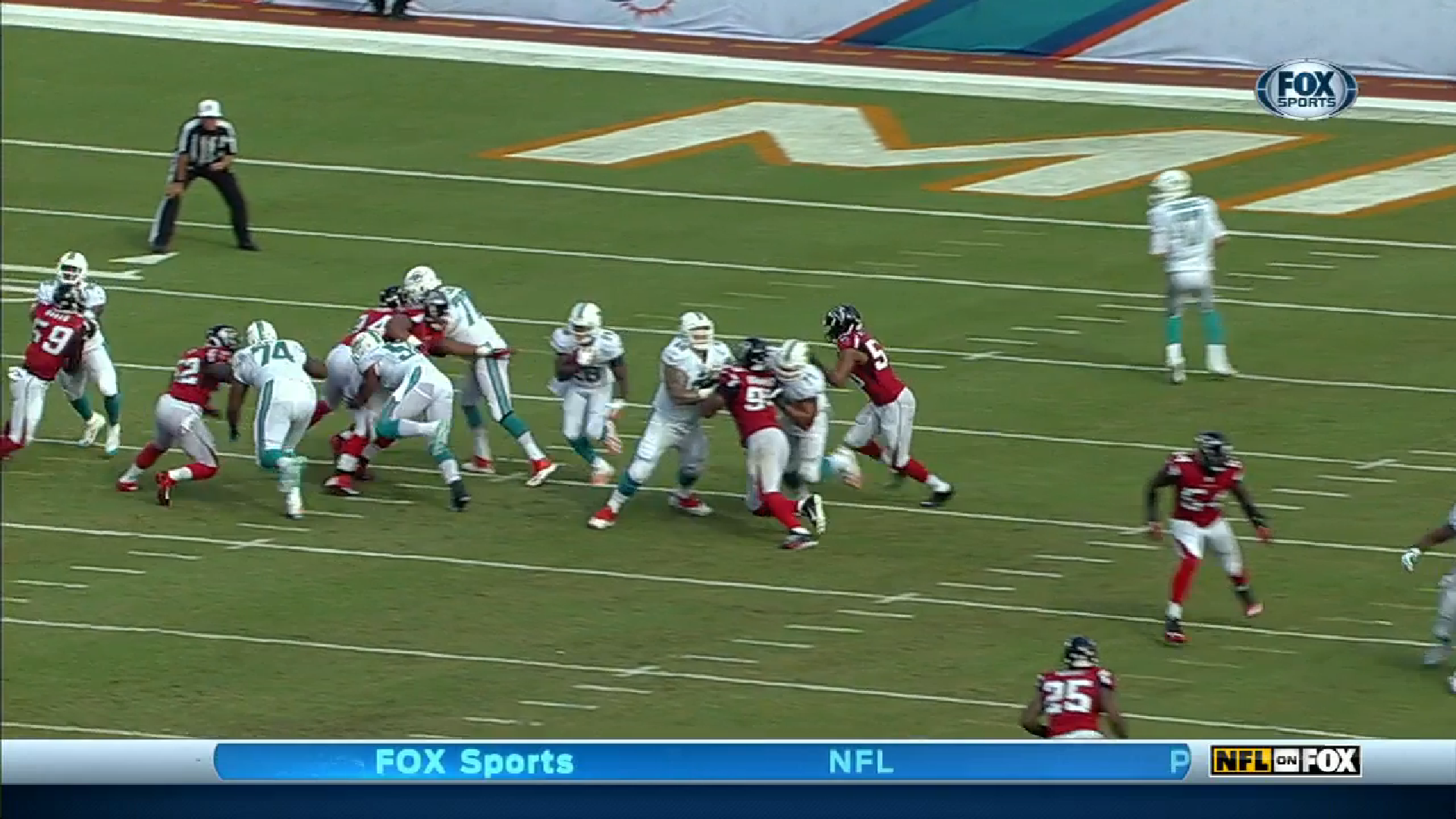 As Miller hits the hole with a wide open middle of the field in front of him, the incredible blocking from the offensive line can be seen. Every defender who could make a play has a white jersey between him and the ball, and there's simply no one to tackle Miller. The Dolphins 2013 season was dominated by the failure of the offensive line, but, on this one play, they were able to work as a perfect unit, and sprung Miller for 49 yards. 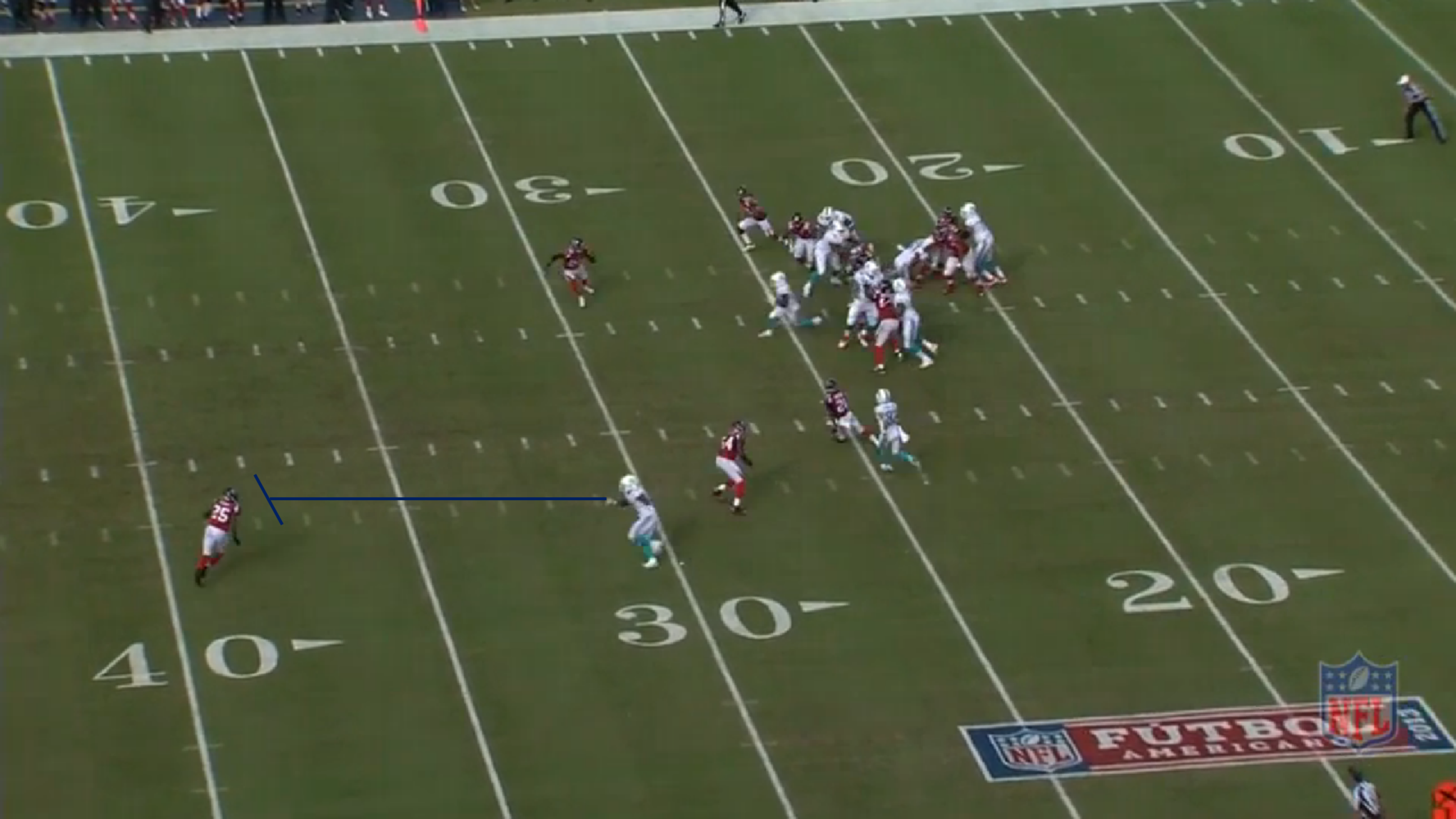 Miller bursts through the hole and into the open middle of the field. The Falcons are all trying to react to the play, while Clay continues to work toward Moore for the block that could spring Miller for a touchdown. 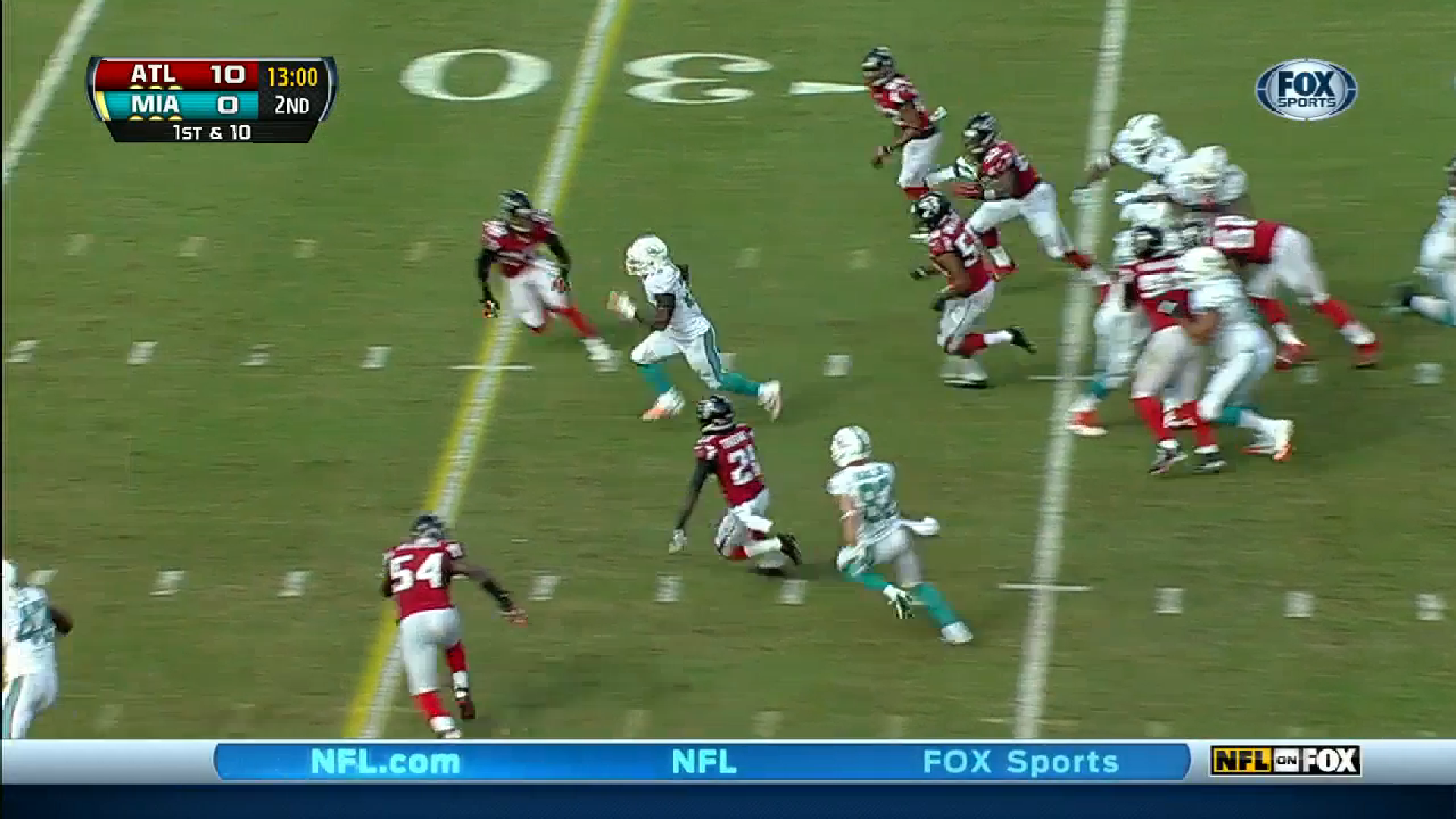 Now, it's simply a foot race down the middle of the field. 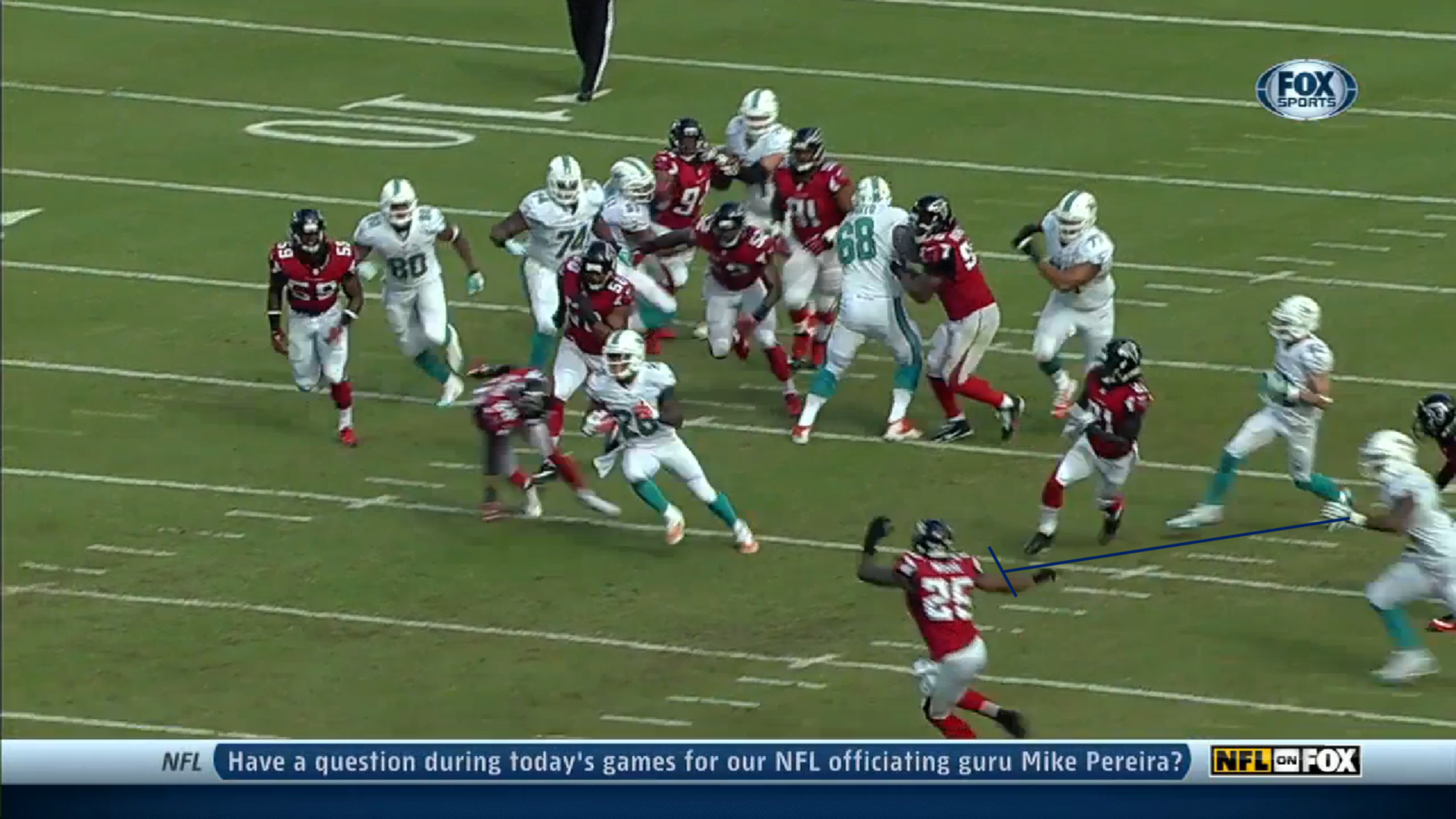 Switching views, Miller's foot race appears to be an easy win for him. 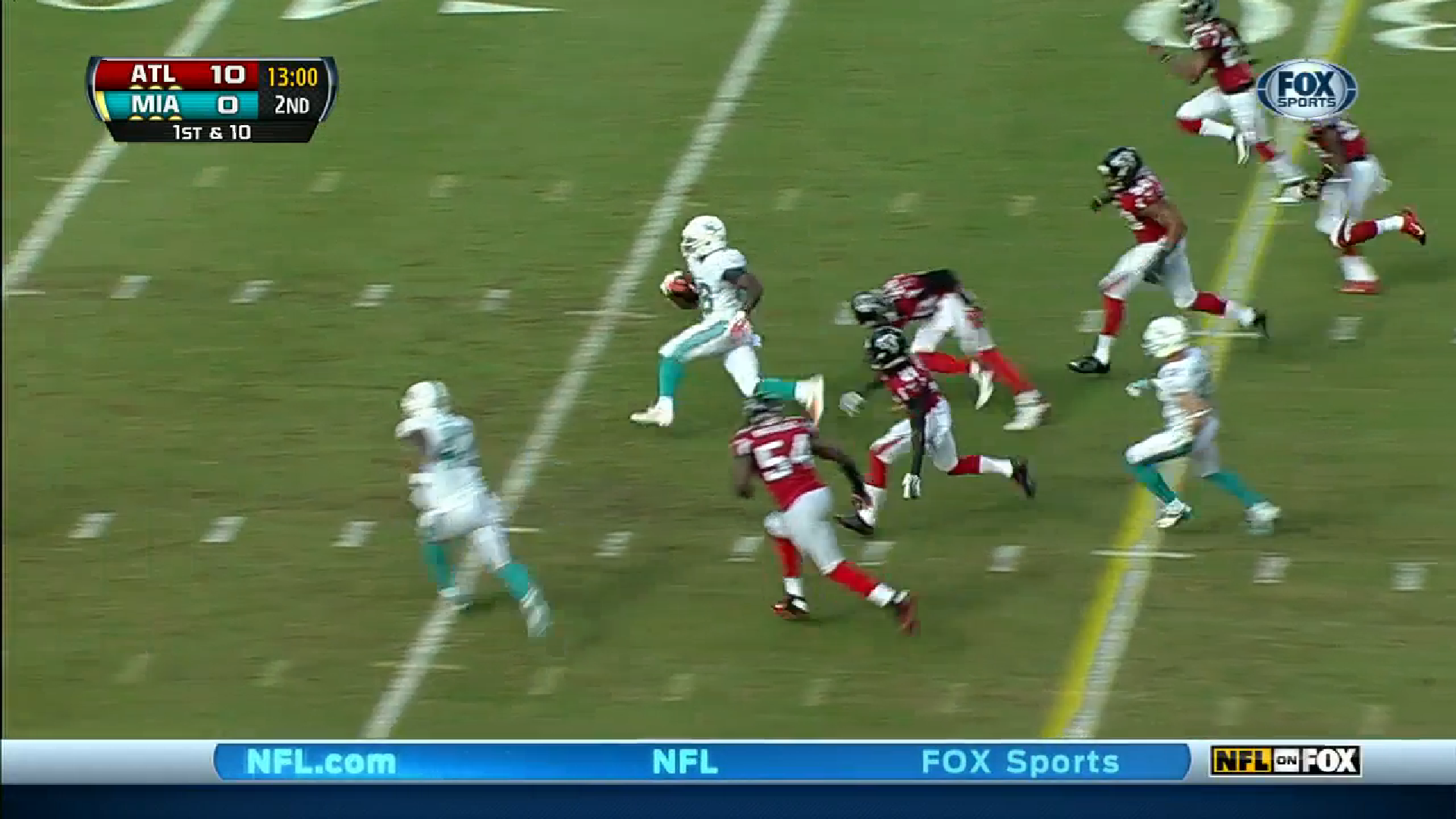 Unfortunately, he is able to outrun his one remaining blocker, Clay, as well 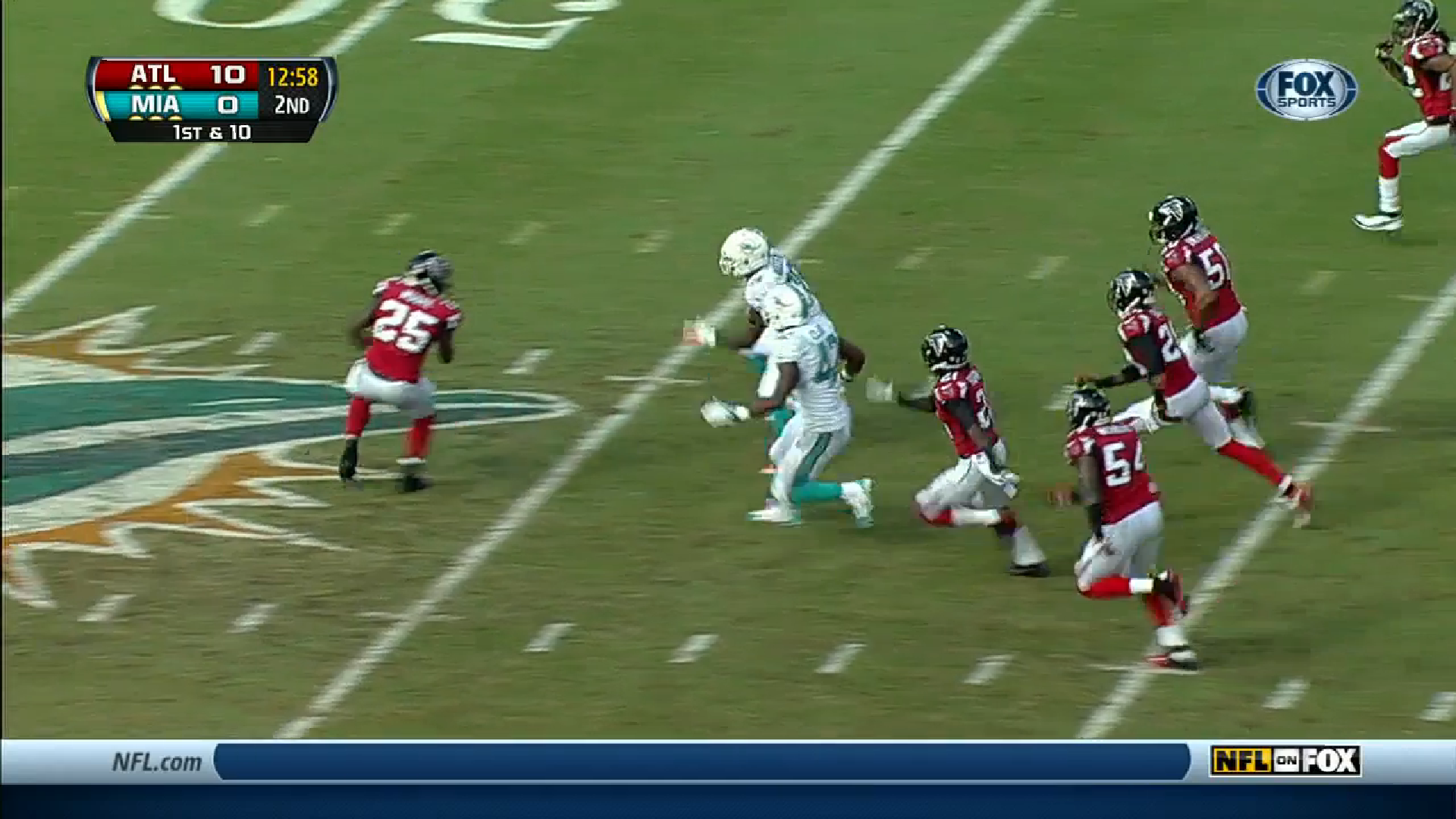 As Miller reaches the 45-yard line, he's already passing Clay. With no one in front of him to block Moore, Miller begins trying to juke back and forth to get past the safety. That has now allowed the rest of the Falcons defense to close on him. 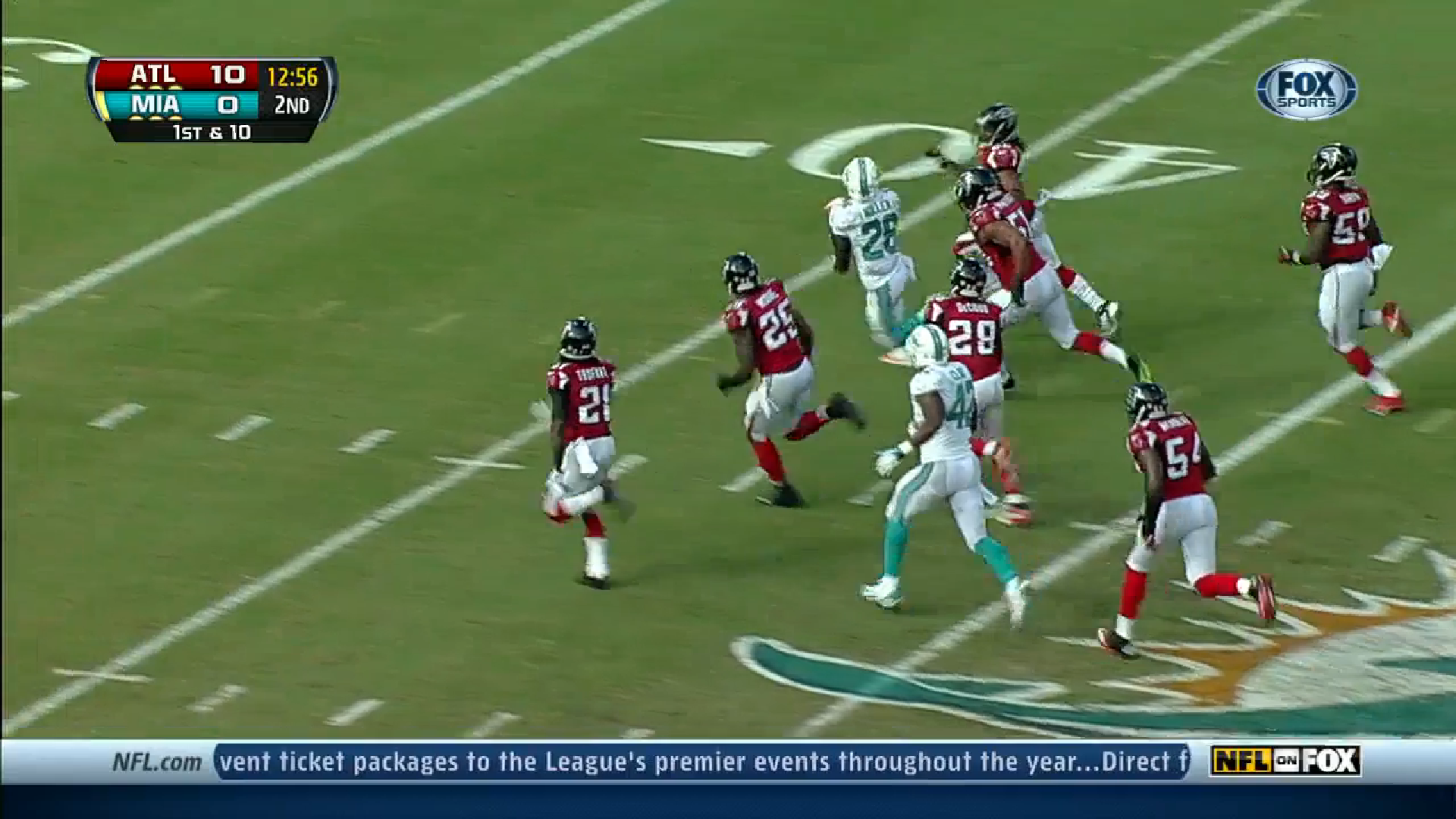 Miller is able to get past Moore, but his cut to the right leads him straight into the reach of Samuel and Umenyiora who are chasing the play. Samuel ultimately makes a swipe at Miller that is able to bring him down. 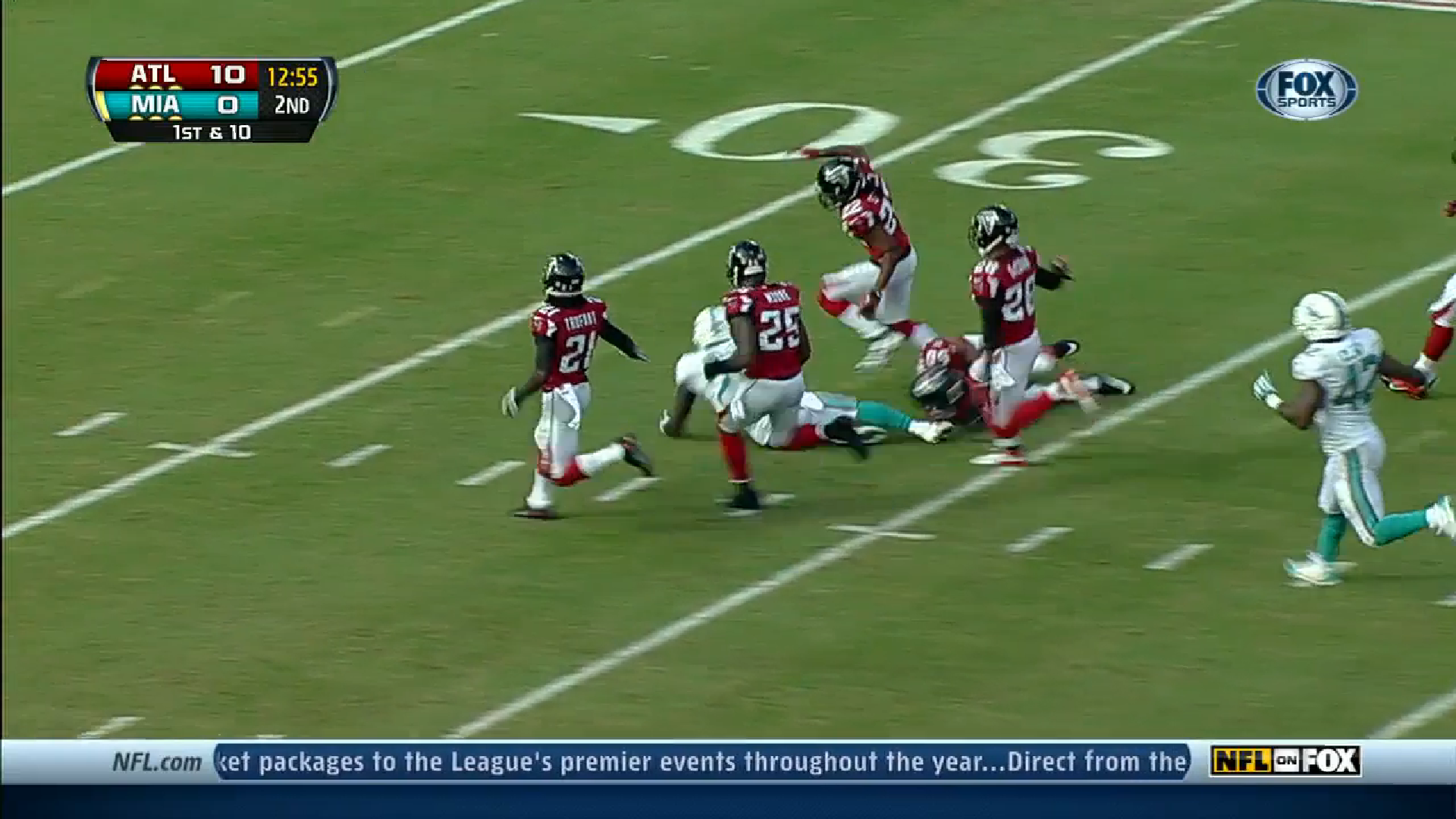 Miller comes down after 49 yards. It was the fourth play from scrimmage for the Dolphins, after the Falcons opened the first quarter with a 15-play, nearly nine-minute drive for a touchdown, only to see Miami go three-and-out. Atlanta then finished the first period and started the second on an 11-play drive, ending in a field goal.

Thanks to Miller's run, the Dolphins were able to score a touchdown on the drive, coming five plays later on a five-yard touchdown run from Daniel Thomas.

Miami would win the game on a final touchdown drive with quarterback Ryan Tannehill directing a 13-play, 75-yard drive, a drive that would earn Tannehill the NFL's GMC Never Say Never Moment of the Week for Week 3.

Miller's 49-yard run would hold as the longest carry for the Dolphins until Thomas pulled off a 55-yard scamper in Week 13 against the Pittsburgh Steelers.