Talk about jumping into a conversation you didn't need to enter. Former Miami Dolphins offensive tackle, currently with the San Francisco 49ers, decided he needed to give some advice about getting back out on the court to Miami Heat superstar LeBron James during NBA Finals Game 1 last night.

Share All sharing options for: Jonathan Martin has advice for LeBron James during NBA Finals Game 1

The Miami Heat lost Game 1 of the NBA Finals to the San Antonio Spurs last night in an AT&T Center with a broken air conditioner. In conditions where the court temperature exceeded 90-degrees, superstar LeBron James was forced to leave the game with dibilitating cramps, which were so bad James could not walk. A former Miami Dolphins player had some in game advice for James. 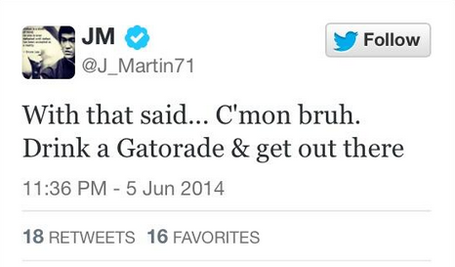 Yes, that's Jonathan Martin calling out James for not being tough enough to deal with cramps. The Jonathan Martin who didn't leave a game with the Dolphins, he left half a season. The Martin who walked away from the team and alleged bullying at the hands of teammates, yet told the teammates at the same time that he did not blame them. The Martin who walked away from the club because he couldn't tell the coaches that Richie Incognito, John Jerry, and Mike Pouncey were being mean to him.

Martin, who was traded to the San Francisco 49ers after deserting the Dolphins last year, tweeted the above comment about 10 minutes before the game ended. James was being carried off the court and stumbling back to the locker room. Martin was by-far not the only person to take a shot at James, but he sure was the one that jumped into a situation he had no business entering. He opened himself, rightly, to comments and critiques.