The Miami Dolphins landed an offensive tackle with the 19th overall pick in the 2014 NFL Draft, adding Tennessee's Ja'Wuan James to the club. Let's take a way too early look at the team's draft grades from the selection.

The first round of the 2014 NFL Draft ended just a few hours ago, which means there's been plenty of time to grade the selection made by each team, deciding whether they have chosen wisely, or if they are getting ready to disintegrate Indiana Jones and the Last Crusade style.  We break down players, their value at the position they were picked, and the need of the team, to somehow come out with a list of NFL Draft grades.

How do you know the Draft grades from last night's first round really don't mean much?  On April 14, 1999, Sports Illustrated's Peter King conducted his Draft grades from the 1998 Draft.  A year after the Draft, and what team had the highest grade?  The Miami Dolphins, who received an A-, with this explanation:

The Dolphins got three future starters (and stars, in my opinion) in Rounds 2 through 4: defensive linemen Kenny Mixon and Lorenzo Bromell, and cornerback Patrick Surtain, who, according to coach Jimmy Johnson, "might be the best draft pick I ever made.'' I'm disappointed in top pick John Avery, who's not tough enough to be more than a situational back.

Tied with the Dolphins were the Detroit Lions, with quarterback Charlie Batch described as "the steal of this entire draft," the Minnesota VIkings, with the pick of Randy Moss, and the Indianapolis Colts, who picked some player named Peyton Manning.  Would you rate the Dolphins' 1998 Draft with Moss or Manning?  And, that was a year after the Draft.

Now, we take a shot at grading one single round, which most of the time means one single pick, for each team just a few hours after the player has been selected.  The player may have had time to hold a conference call, but we already have grades for him and what he will mean to the team that selected him.

(To emphasize this point a little more - In 2000, King assessed the Draft right after, and, in his ground rules of completing the grades, he explained that he does not count anything after the fourth round, because there's a 10-percent return rate on any player taken that late in the draft.  It's a good thing a sixth round pick from the New England Patriots didn't turn into a Hall of Fame quarterback or anything.)

(Another note: I know this seems like I am picking on King.  I'm really not.  I really like his work.  He just happens to be the one set of grades I could find from that far back.)

We all love Draft grades, and we all read them.  It was one of the first things we posted last night, after the Dolphins' selection of Ja'Wuan James, and it was one of the first thing I searched this morning, trying to see what people were saying about Miami's pick.  They are fun.  They lead to debate.  They confirm the media love for some teams and bias toward others.

After explaining why they are a necessary evil, we, of course, will take a minute to look at the current Draft grades given to the Dolphins and their use of the 19th overall selection on James.

First, we take a look at GM Dennis Hickey's grade of their selection.  In a shocking analysis, Hickey seems to like the pick he made:

He was the best player for us. That’s the way we valued him. That’s how we saw him, and it started way back. This is a process where so many people are involved whether it be area scouts, as it gets closer to the draft coaches, our medical staff, our director of security. All of these people did a great job in working together, our operations people. This is definitely a collaborative effort and a cumulative effort of a lot of hard work. We are just excited about the end result of getting Ja’Wuan James as a Miami Dolphin.

Okay, that's not really a grade - and it's a little hard to call that an objective opinion.

Let's turn to some people who are always objective when it comes to the Dolphins - us fans.  Last night, we asked you to grade the Dolphins' pick of Ja'Wuan James.  After over 1,700 votes, the grade actually does seem fairbly accurate for the team, coming in with a solid B, and a majority of the votes in the A-to-B range.  The pick was clearly a need selection for Miami, but it was of a player a week ago, we heard was graded by the team as a first round prospect.  While people will declare it a "reach" (and we will see that word pop up multiple times in just a minute), the Dolphins knew who they wanted, and they weren't willing to trade back for fear they would lose him. 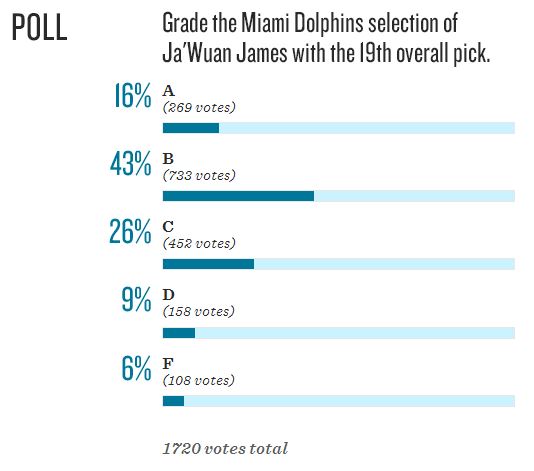 Taking a look around the web, the pick seems to come in with a similar grade - a lot of Bs.  There are a few more Cs than perhaps we, as fans, felt, but, everyone seems to at least understand the pick, even if they disagree with the Dolphins' rating of James as a first round talent.

The grade: B; The risk: Ja'Wuan James was a bit of a reach based on our board, but it's tough to fault the Dolphins for addressing a need. James didn't play left tackle in college, but he won't have to in Miami either. The reward: Offensive line was the biggest need for the Dolphins entering the draft, and James should help fix the problem. He has plenty of length and the skill set to contibute early.

Thumbs down - The Dolphins reached to fill their need at right tackle with James. Miami missed on top-tier offensive tackles such as Zack Martin and Taylor Lewan. -- James Walker

C+. The Dolphins reached to fill a need, usually a bad plan. James is a solid tackle, but Miami should have tried to move up for Zack Martin. The offensive tackle class falls off after Robinson, Matthews, Lewan and Martin. The Dolphins needed to shore up a unit that allowed 58 sacks last season, but James isn’t a great pick with other options here.

C- Grade. I loved the crowd reaction to this, as many of the people in the seats responded, "Who?" The Dolphins have loved JaWuan James all along, but there's no doubt that this is a major reach. James might have been available at Miami's second-round pick. I would give Miami a dreaded Millen grade under normal circumstances, but think about what happened last year. The Dolphins almost had to go offensive line to protect Ryan Tannehill, and with the top four tackles off the board (as well as C.J. Mosley and Ryan Shazier), they didn't have much of a choice. I just wish Miami would have traded down.

The skinny: Did the team address a need here? Yes, it did. Did it reach to draft James? Absolutely. Sure, the Dolphins liked him ahead of Cyrus Kouandjio and Xavier Su'a-Filo, but they could have moved back and added picks and still landed him. They could have even nabbed him in the second round. Time will tell on James, but from a value standpoint, it's hard to like what the Dolphins did, with so many issues.

Grade: C. Teams can get into trouble when they eschew the best talent on the board for positions of need, but the Dolphins found themselves a bit boxed into a corner — horribly thin and outmatched along the offensive line, plus unable (or unwilling) to move up for one of the top four tackles. Neither Kouandjio nor Moses provided much more of a safe pick than James, and James may wind up being the best of the bunch. Still, in terms of where a prospect landed on the overall draft board, this was a reach.

NFL Draft 2014 grades: How each team fared in the first round | cleveland.com

Miami badly needed a tackle and while they did not get one of the higher-rated players at the position, they were able to address a position of need. James was a four-year starter at right tackle with Tennessee and could provide the Dolphins with flexibility at other positions on the line. Grade: B

Grade: B-; The Miami Dolphins needed an offensive tackle—badly.  Ja'Wuan James is an athletic guy who can play either tackle or guard, and he should be a better natural pass-protector than anyone left on the board for the Dolphins. Although there were other needs, the offense wasn't going anywhere with the personnel they had.

2014 NFL Draft: Round 1 grades for every pick - CBSSports.com

Perhaps this year's most underrated O-linemen, James is an immediate upgrade to the Miami right side having compiled 49 consecutive starts at right tackle for the Volunteers, and proving to be their most durable, consistent performerup front over the course of his career. On tape, James displays an impressive combination of fluidity and power that make him a force in both facets of the offense who needs very little refinement and should step in and start immediately. GRADE: B+

NFL Draft 2014 Coverage: All of your Dolphins coverage in one place