Depending on which newspaper you believe, Koa Misi has either told Dolphins coaches that he doesn't want to move to middle linebacker (Palm Beach Post) or is willing to try a move to the middle (Miami Herald)

Share All sharing options for: Miami Dolphins Linebacker Koa Misi Is Either Reluctant or Willing to Move to the Middle

Less than a year later, the Dolphins' new regime led by GM Dennis Hickey immediately began looking for potential upgrades to the linebacker corps, first by offering free agent middle linebacker D'Qwell Jackson a free agent deal and a promise of a guaranteed starting spot, with Ellerbe moving to outside linebacker and Wheeler competing with Misi for snaps at the other OLB spot. Then, after Jackson accepted the Indianapolis Colts' more financially generous offer, it was reported in March by the Miami Herald's Barry Jackson that the Dolphins were strongly considering moving Misi to middle linebacker. Adding credence to this report was GM Dennis Hickey confirming that Misi would be spending some time this offseason at middle linebacker, though Hickey quickly added it was just an "offseason experiment" and isn't an official position switch.

Today, the Palm Beach Post's Andrew Abramson reported that Misi didn't want to move to inside linebacker. Misi has spent time at 3-4 outside linebacker and 4-3 defensive end in the NFL, but his most effective position so far has been 4-3 strongside linebacker (click here for a description of the various linebacker roles in our 4-3 defense), and if this report were true, it would make some sense if Misi would prefer to avoid yet another position switch.

However, the Miami Herald's Adam Beasley reports that Misi did not "refuse" a position switch, which may or may not directly contradict Abramson's report, which said that Misi didn't want to move to MLB and had strong reservations about moving to MLB but didn't say he "refused" to move to the middle.

This is relevant, regardless of which report is true.

If the Palm Beach Post is correct that Misi has doubts about his ability to play middle linebacker, the Dolphins front office's best options to improve MLB play would be to either hope Ellerbe improves in his second year as a 4-3 MLB, or draft an inside linebacker in the draft, whether it's CJ Mosely of Alabama, Chris Borland of Wisconsin, or Shayne Skov of Stanford in the early rounds or mid-to late round prospects like Preston Brown of Louisville (whom the Dolphins sent their linebacker coach to visit 2 days ago, according to Jackson of the Miami Herald) or Max Bullough out of Michigan State.

If the Miami Herald is correct that Misi is willing to play middle linebacker, then 4-3 outside linebacker prospects like Ryan Shazier out of Ohio State become more likely draft selections given that the Dolphins would already have a potential new middle linebacker already on the roster.

Back in March, the Phinsider ran the following poll. 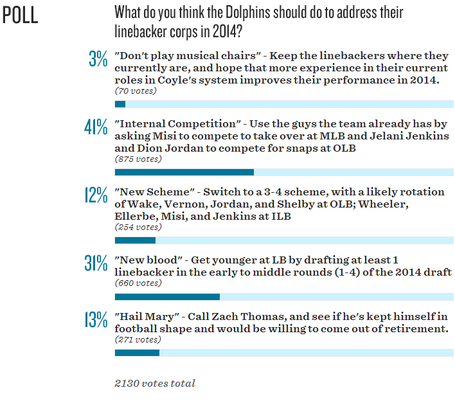 A plurality of 41% of readers preferred internal competition compared to other options including adding talent.

With a week to go for the draft, I figured now would be a good time to re-ask the question.