The third in a series of three polls to decide who the Phinsider community wants to draft in the first round of the NFL Draft for the Miami Dolphins.

This is it.  We've made it to our third day as the general manager of the Miami Dolphins and now have to pick the right player.  The Phinsider community has to make a pick with the 19th overall selection in next week's NFL Draft.  No trades are on the table, so a pick must be made.

We are going to decide who to pick through a series of polls here on the site.  The first of those polls was Wednesday, deciding if we will use the pick on the offense or defense.  The second poll was yesterday and decided which position we will choose.  The final poll, today's poll, will give us the player we are targeting.

For obvious reasons, I will use some discretion when it comes to the player.  If, say, we decide we are going to address defensive end with the 19th pick, Jadeveon Clowney will not be on the board, because these is zero chance he lasts that long.

Other than that, the decision is up to us as a community.

Wednesday's vote indicated that we are going to make a pick on the offensive side of the ball.  In another expected result, the Dolphins will now pick the position everyone knows they need to address in the Draft: 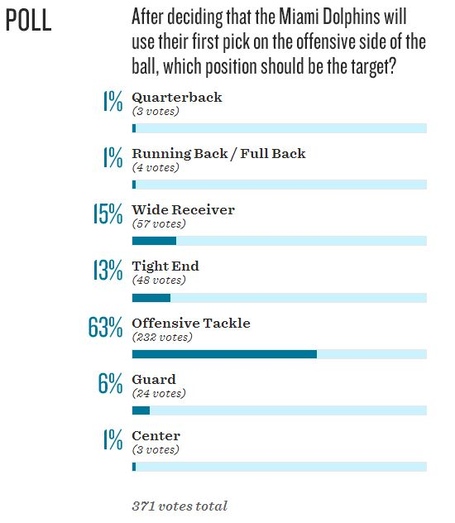 Now, we turn the poll to the exact player. Go vote and let's see if all three polls end up exactly as anyone would have predicted.