#ThrowbackThursday: VICTORY!!!! - A look back at the 2007 win over the Ravens

After missing a week, our #ThrowbackThursday series continues today with a look back at the Phinsider's reaction to the Miami Dolphins' 2007 win over the Baltimore Ravens - the team's only win that year.

Our Throwback Thursday series is a re-posting of a past Phinsider post, giving us a look back at the site and the Miami Dolphins.

Share All sharing options for: #ThrowbackThursday: VICTORY!!!! - A look back at the 2007 win over the Ravens

[Editor's Note: This post was originally posted on December 17, 2007 by Matt Infante (@TheMattyI).]

After 372 long, long days, the Miami Dolphins have won a regular season football game!! That's right. You aren't dreaming. The Dolphins have one. In doing so, their 2007 season will soon be forgotten, unlike the '76 Buccaneers. Sure, it's only one win. But it keeps this team from infamy. And following Greg Camarillo's 64 yard touchdown catch in overtime, this team and their fans celebrated like they had just won a Super Bowl. Even owner Wayne Huizenga shed some tears. And that's what football is all about.

Let's look at some headlines from Sunday's game:

All the pressure that had been building up on this team is now gone. All the tension is gone. We saw some players embracing coach Cameron on the field and in the locker room. Jason Taylor and Cam were even seen walking off the field together with their arms around each other. Then in the locker room, Taylor gave Cameron the game ball. They say winning cures everything. My question is if this win will save Cam's job. Now I don't want to harp too much on this, though. I do just want to enjoy this week and soak in the victory. But this is something that we'll have to think about. Cam's supposed biggest critic, Jason Taylor, showed Cam as much love as we'd ever seen following this victory. Has Cam changed his mentality? Could he be looking more towards the veterans for leadership and advice now? I don't know. But there is something to be said for a team in the situation that this team was in, and with how the game was unfolding late, to still put forth the kind of effort they did today.

This game was seriously a perfect storm of events for the Dolphins. Their playmakers certainly made some plays in this game. Jason Taylor had 2 big sacks. But his biggest play, of course, was the blocked field goal prior to halftime that would have been an absolute killer. Lorenzo Booker made plays. And none was bigger than the 4th and 1 option play in the 3rd quarter in which he battled to pick up the first down and set up Samkon Gado's 7 yard TD run on the very next play. He also made some key catches and, after watching him play the past few weeks, you have to wonder what took so long for Lorenzo to be active on gamedays.

But the football gods were also pulling for the Dolphins on this day. How else could you explain some of the lucky breaks the Dolphins got. For example, there's Michael Lehan's interception. That was a ball that sohuld have been caught by Devard Darling for a 40 yard gain down to Miami's 14 yard line. Instead, if bounces right out of his arms and into the arms of Lehan. And, of course, there was the king of all lucky breaks. Matt Stover had never missed an overtime field goal in his career before missing wide left on the 44 yard attempt on Sunday. However, I must say that these lucky breaks were looooooong overdue, especially in the kicking game. How many times have we seen an opposing kicker make 40 or 50+ yard field goals to win the game? Hell, Kris Brown made 3 50+ yarders in one game this year against us, including the game winning 57 yarder. So it was about time we got some luck on our side!

I could have put this under the section above, but I wanted to single out this group of wide receivers, who consistently made plays in the second half. Marty Booker was huge, especially on their last 2 drives of the 4th quarter. That's when he caught 4 balls for 55 yards, including a key 3rd and 11 reception to keep that final drive alive. And I need to again give some credit to Lorenzo Booker, as he had an absolutely critical 3rd down catch on that final regulation drive as well.

Oh boy, this defense. What can I say about this unit. All they did today was almost give me multiple heart attacks. But before we get to the bad, I just wanted to point out something that was an absolute key in this game. So many times, after this offense does score, we see this defense let the opposing offense march right down for some kind of points. But today, following Feely's field goal that tied it at 13, we saw this defense actually hold Baltimore to a 3 and out. That's so critical in these kinds of games. That allowed Miami to hold onto the momentum and get the offense, which was getting hot, back onto the field.

With that said, how in the world can this defense surrender 345 yards of offense to this team? Hoe can they let this Ravens' offense convert 50% of their 3rd downs? And how the hell can they let Troy Smith lead his team down the field with less than 2 minutes left to play? The Dolphins got very lucky that Brian Billick doesn't have any balls. Otherwise they would have went for it inside Miami's 1 yard line with 12 seconds left. I know I would have. And then to start out the overtime, this Dolphin defense let Willis McGahee, Mike Anderson, and Musa Smith just run the ball down their throats and get into field goal range. That was disgusting, to be honest. But hey, with the "W", all is forgotten...for now.

With all the drama surrounding Cleo Lemon, you have to hand it to the kid. He came out, played better than he has all year, and won the ballgame. And I have much more respect than I ever have for Cleo because he really made some plays late in this game. However, he still made some dumb mistakes and bad throws. I saw him miss numerous open receivers on would-be big plays. And the king of all the stupid mistakes he's ever made was when he decided to run out of bounds for a 7 yard loss with under 8 minutes left to play and the game tied. All Cleo had to do was throw it away and Miami could have tried a 49 yard field goal. Instead, Cleo scrambled around and ran out of bounds, forcing the Dolphins to punt. I was ready to absolutely murder Cleo if Miami ended up losing this game. But to his credit, he kept his composure and made plays that had to be made. And I think a lot of that has to do with the offensive line giving him loads of time to throw the ball in the 2nd half. That was the best protection I had seen from them since before John Beck made his debut about 4 weeks ago. So kudos to the offensive line!

-Jason Allen is still quite bad in pass coverage. I saw him allow at least 2 big plays because he was out of position. I like what he does in run support, but I don't know if he'll ever be the kind of player he was thought to be coming out of Tennessee.

-One of the keys was time of possession. In the 3rd and 4th quarters, the Dolphins held the ball for over 11 minutes...in each quarter. That's very impressive.

-I was a little disappointed in the lack of involvement of Ted Ginn. But he did almost have a long touchdown reception, and there should have been a pass interference on that play, as the defender was clearly face guarding. Oh well.

-Considering how long it took for this team to win, I know one thing for sure: I will always be sure to appreciate each and every victory.

NOW LET'S GO GET THOSE F*CKING PATRIOTS NEXT WEEK!!! 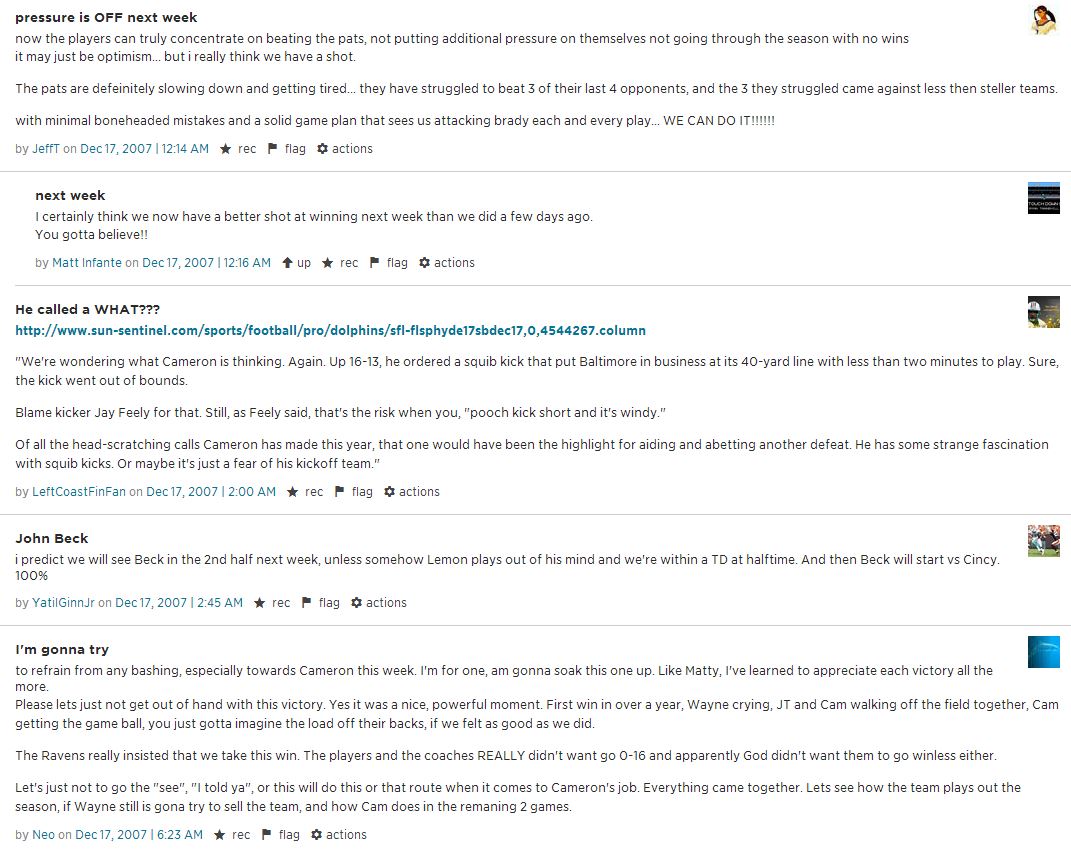 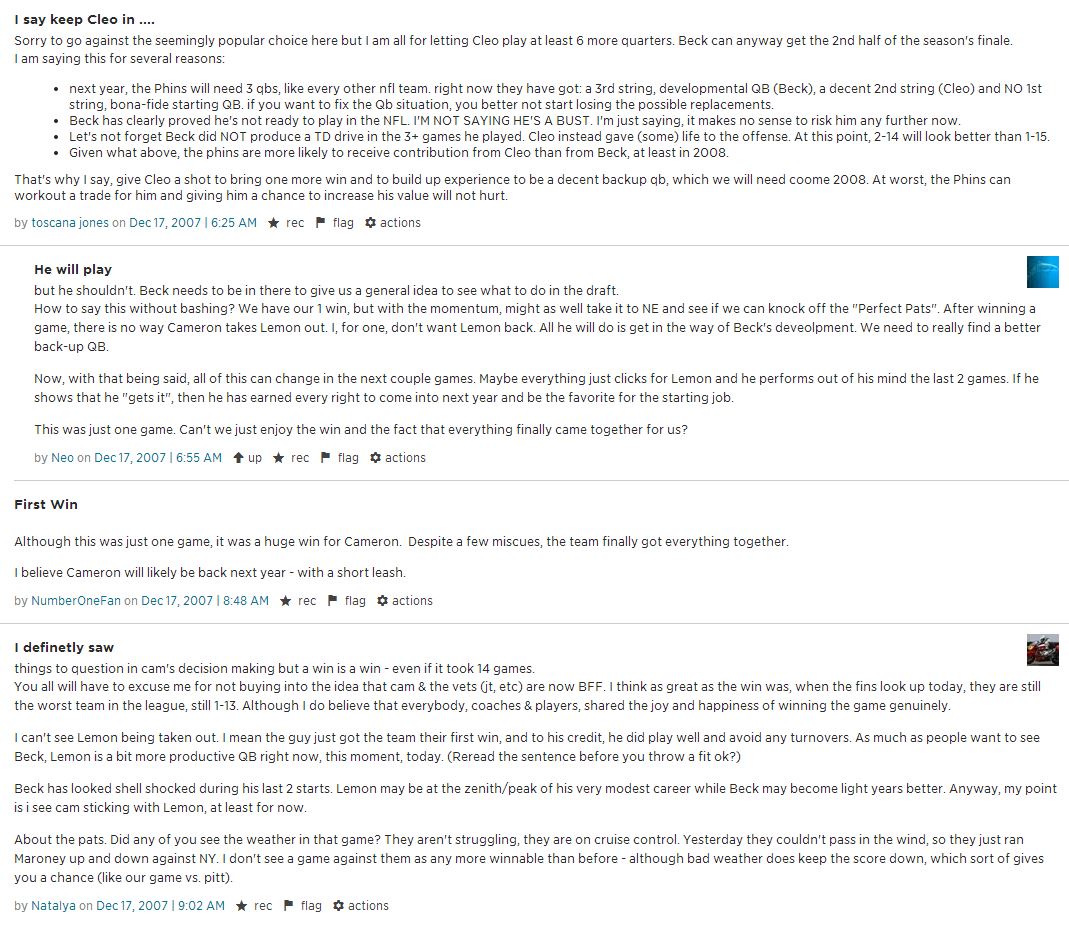 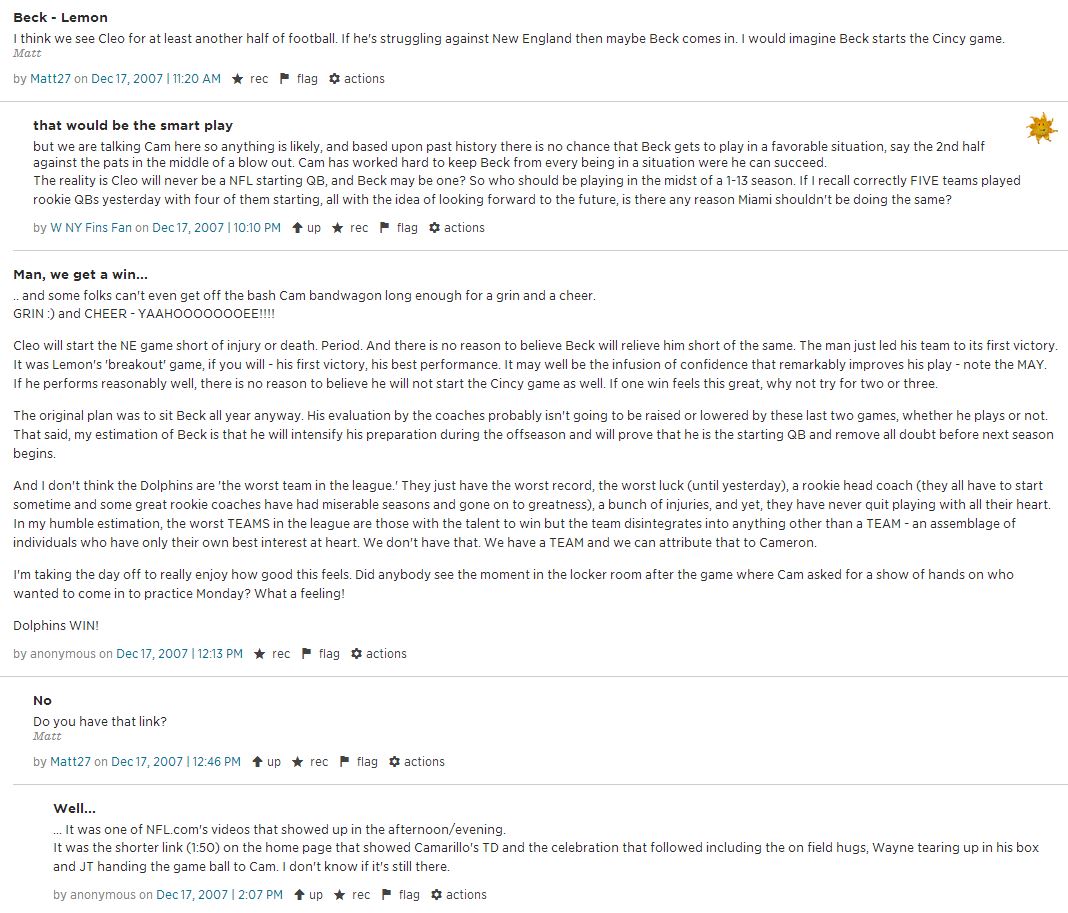 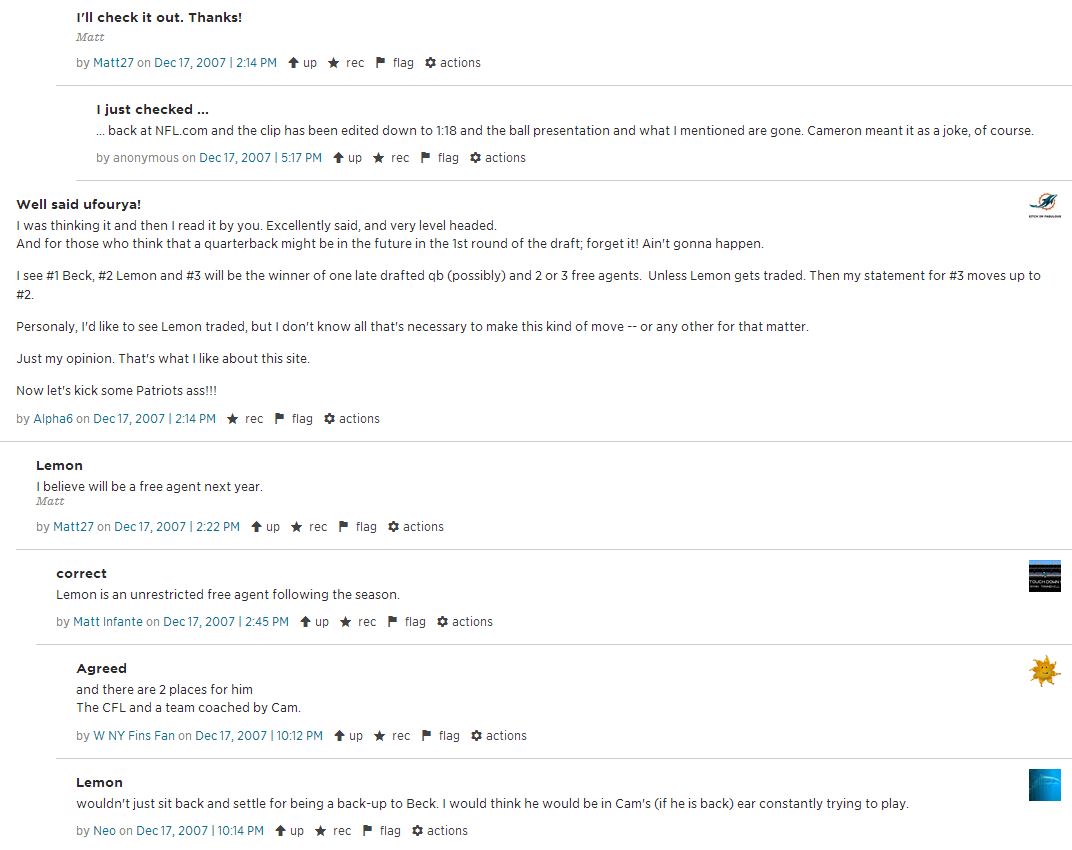 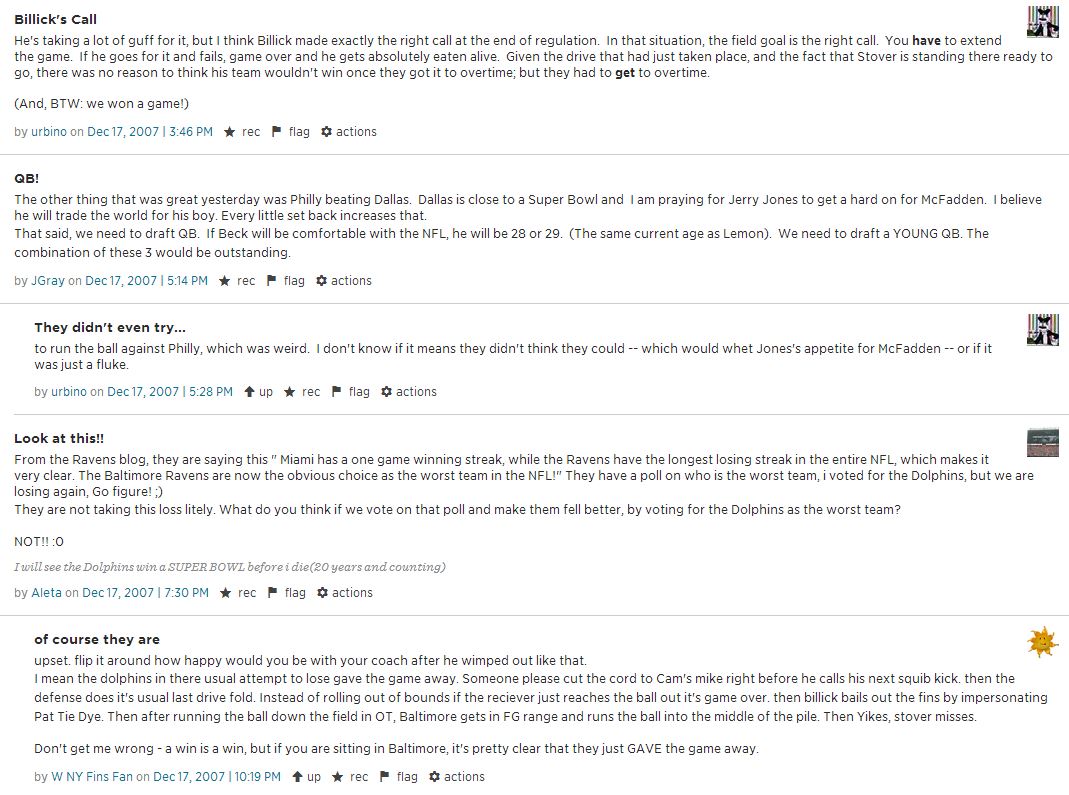 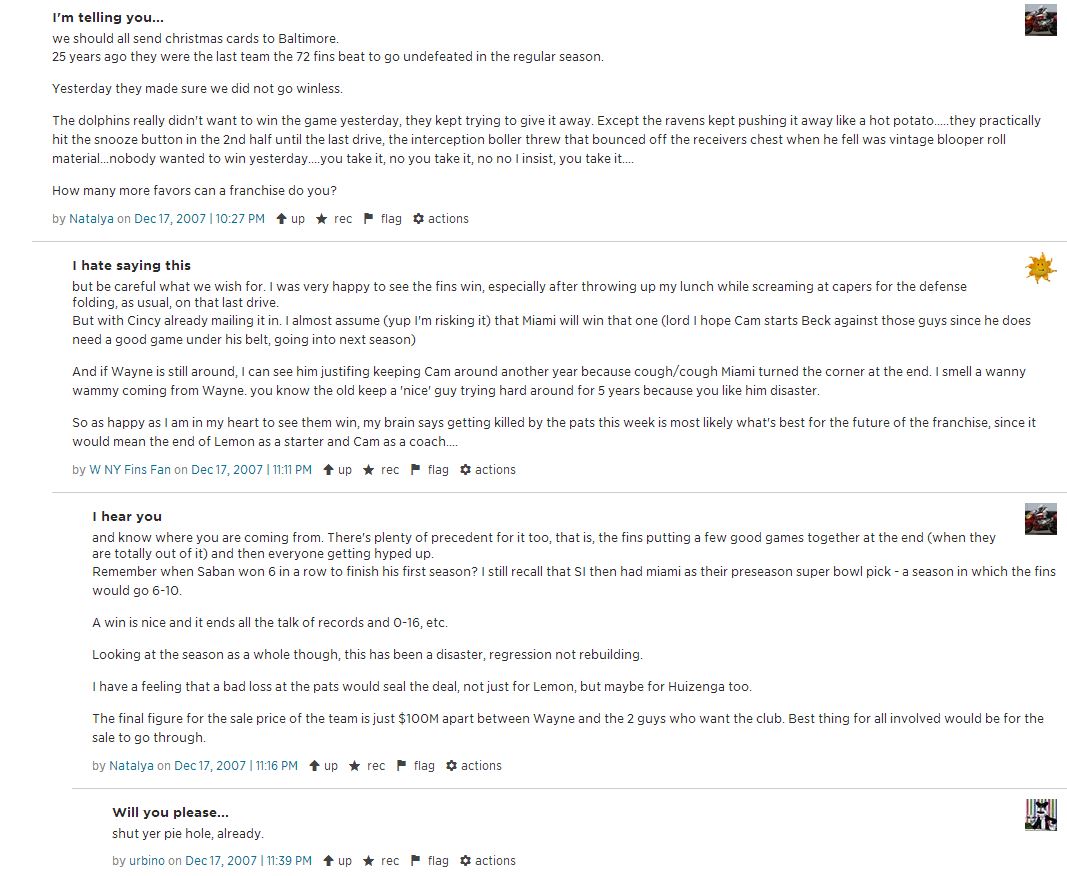