The general ineffectiveness of the Dolphins running back duo last season put pressure on Tannehill and the passing game to move the ball in crucial situations. Justifiably, the team signed veteran tailback Knowshon Moreno to compete at the position, but will he help improve Miami's putrid short yardage rushing production?

Share All sharing options for: Is Knowshon Moreno a Short Yardage Upgrade?

In 2013, the Miami Dolphins had the third lowest run-to-pass ratio in the league and converted the fewest first downs on the ground, with just 3.8 per game.

There is a handful of factors that contributed to these poor results, not the least of which were the coaching staff's dubious commitment to the run and a putrid offensive line. The uninspired play of Miami's top two running backs also led many to doubt if either was a suitable option for the long term. Lamar Miller's progress seemed to stall in 2013 and Daniel Thomas, well, by mention alone conjures up a special brand of ineptitude in the mind of a Dolphins fan.

The single area in which the Dolphins performed the poorest was in short yardage. They converted just 48.1% of runs with three or fewer yards to go into first downs or touchdowns, the second-lowest percentage in the league only to the Seattle Seahawks.

Hopefully the addition of Moreno, who converted 73.2% of his own short yardage attempts last season, will help the Dolphins improve their ability to sustain drives and put touchdowns on the board. But before automatically assuming based on the numbers that Moreno will be a short yardage upgrade, I am going to analyze his work with the Denver Broncos and compare it to Miami's most common short yardage and goal line sets to see if he'll bring that desired result.

First, I took a look at Denver's short yardage tendencies when Moreno was on the field. As you might imagine, the common three-receiver shotgun sets with Peyton Manning put much lateral pressure on the defense, particularly in situations such as the red zone. Teams often responded by substituting out down linemen or run-stopping linebackers for more coverage personnel.

An example is here against in a game against the Jacksonville Jaguars. With three-wide and tight end Julius Thomas inline, the Jaguars have fully prepared themselves for the pass and are lined up in a typical 4-3 Over front, with significant splits between defensive linemen. 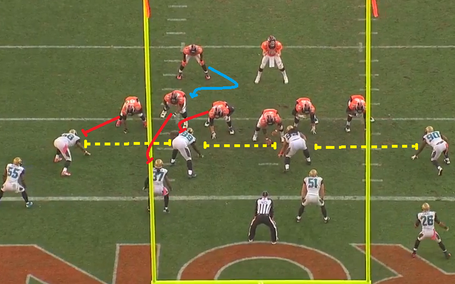 The Broncos run a simple hand-off and Moreno exploits the generous space given by the defense (cleared further by a strong block by guard Chris Kuper) for a three-yard touchdown.

Here's another situation, this time in the divisional playoff against the San Diego Chargers, where a receiver bunch draws four defenders away from the box and dictates a personnel grouping that includes just two defensive linemen. 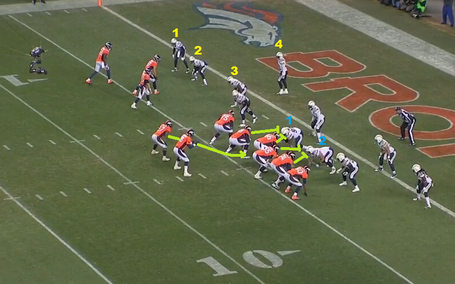 Moreno takes an inside give and his line uses two double teams to clear a path to the goal line.

The tailback is getting the ball into the endzone, but he is benefiting from spacious alignments and undersized defensive personnel groupings dictated not by the situation, but by the lethal Manning-led Broncos passing attack.

Obviously, Moreno leads the pack in conversion percentage, but also in total attempts by a wide margin. Though he split carries with Montee Ball, he saw 21 more short yardage attempts than Miller and Thomas combined. Another interesting takeaway from the data is how much more effective Thomas was than Miller a season ago in short yardage, and that Thomas' 61.11% conversion rate is very respectable considering Miami's tumultuous offensive line situation.

The sample size is not big enough from the Dolphins' backs to assert one is certainly better than another in short yardage from last year alone, but if Thomas' days are truly numbered (as many are speculating is the case) then Miami will certainly need Moreno to be capable of handling the bulk of the short yardage work. Miller did not instill any confidence that he could be that type of player.

Last season, Miami used an entirely different short yardage philosophy than Denver did. Rarely did they spread the defense out, allegedly one of the key tenets of Mike Sherman's offensive scheme, but instead used two- and three-tight end formations often with a fullback, an extra offensive lineman or both.

The Dolphins gave Miller and Thomas just five combined carries inside the opponents' 5-yard line all season. Here are the formations used for each of them:

The heavy set provides significantly less space to operate within and less play call flexibility (meaning added predictability). Also absent is the potential personnel grouping advantage that the Broncos were able to create.

There's no certainty that new offensive coordinator Bill Lazor's offense will run the same way in 2014, but under Sherman's (and by extension, Joe Philbin's) philosophy there wouldn't have been as much room for Moreno to operate. In my opinion, Daniel Thomas' 61.1% success rate under the circumstances (heavy formations, terrible fullbacks and run blocking offensive line) is more impressive than Moreno's 73.2% in Denver's offense.

No matter what, Moreno was a solid, low-cost signing that immediately improves multiple aspects of Miami's offense. He's an upgrade in pass protection and in the passing game overall, but to replicate his career-best rushing performance from 2013, Lazor will need to help create open running lanes via scheme.

This fantasy football-centric article by ESPN's Chris Harris has some interesting comments regarding Moreno's rushing productivity from last year, including this statistic:

The positive news is that the 2013 Eagles offense, in which Lazor served as the quarterbacks coach, led the league in rushing utilizing similar concepts that the Broncos did. They used the short passing game, versatile personnel groupings and quick tempo to manipulate defenders in space and create favorable alignment advantages.

Moreno's ability to replicate his success from a year ago and provide a much-needed upgrade in short yardage likely hinges on Lazor carrying over these core concepts from the Eagles' dominant running game. If the Dolphins continue to employ a power running philosophy in these situations, Moreno is just as much of a variable as Miller or Thomas.