Ryan Tannehill can count himself among the top players in the NFL - at least when it comes to jersey sales. The Dolphins second-year quarterback trails just future Hall of Famers Peyton Manning and Tom Brady in the AFC, and is 10th among all players.

Though he has yet to truly cement himself as a franchise quarterback, Miami Dolphins fans have made Tannehill's one of the top-10 best selling jerseys on NFLShop.com, according to the league's Facebook page. The list accounts for items sold between April 1, 2013 and February 28, 2014.

Naturally, the list includes some of the best and brightest names the league has to offer. It's up for debate if Tannehill belongs among this group, but one thing is clear: he's earned enough belief ($99.95 worth of belief, to be exact) from Dolphins nation to land just behind Packers great and former MVP Aaron Rodgers on this list.

Another interpretation is that the quarterback-starved Dolphins fan base is elevating Tannehill's stature after getting two inconsistent but solid seasons. In other words, the hope that Tannehill is the long-awaited franchise savior has made the fans eager to rally behind the steadiest option the team has had at the position in years.

That's probably a little cynical. Obviously, he wouldn't have made the list without the oft-mocked Dolphins fan base spending money to support its team. Plus, everyone needs one of the redesigned jerseys in their collection; Tannehill's is just about as good an option as any.

The NFL did not say where this prominently-featured jersey from the Dolphins' site ranked: 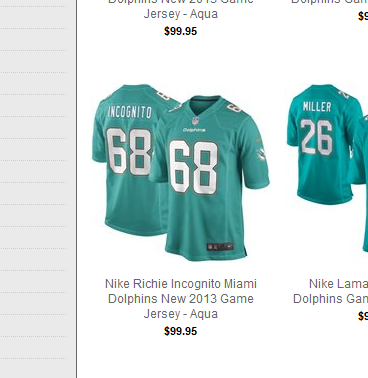 The only other two players from the AFC to make the list were Peyton Manning and Tom Brady. Three members of the Super Bowl-winning Seahawks -- Richard Sherman, Marshawn Lynch and top-seller Russell Wilson -- found themselves in the top 10.