Dolphins Free Agent Big Board: Re-Signing own players a priority

Earlier this week, we asked you to vote on the players you want to see the Miami Dolphins re-sign this year, preventing the soon-to-be free agents from departing South Florida. Now, we take a look at your results, building our "big board" of free agent re-signings.

Share All sharing options for: Dolphins Free Agent Big Board: Re-Signing own players a priority

With the offseason under way, NFL teams are turning their attention to the upcoming free agency period and the 2014 NFL Draft.  However, there's another step in the process that cannot be missed - re-signing their own players.  For the Miami Dolphins, there are plenty of options this year when it comes to re-signing.  Who should the Dolphins look to bring back next year?  We asked you that question.

After over 1,000 responses, we now take a look at your answers.  We will use them to build a "big board" of soon-to-be free agents that you feel need to be re-signed, starting with the players seen as the highest priority and working our way down to the least critical. 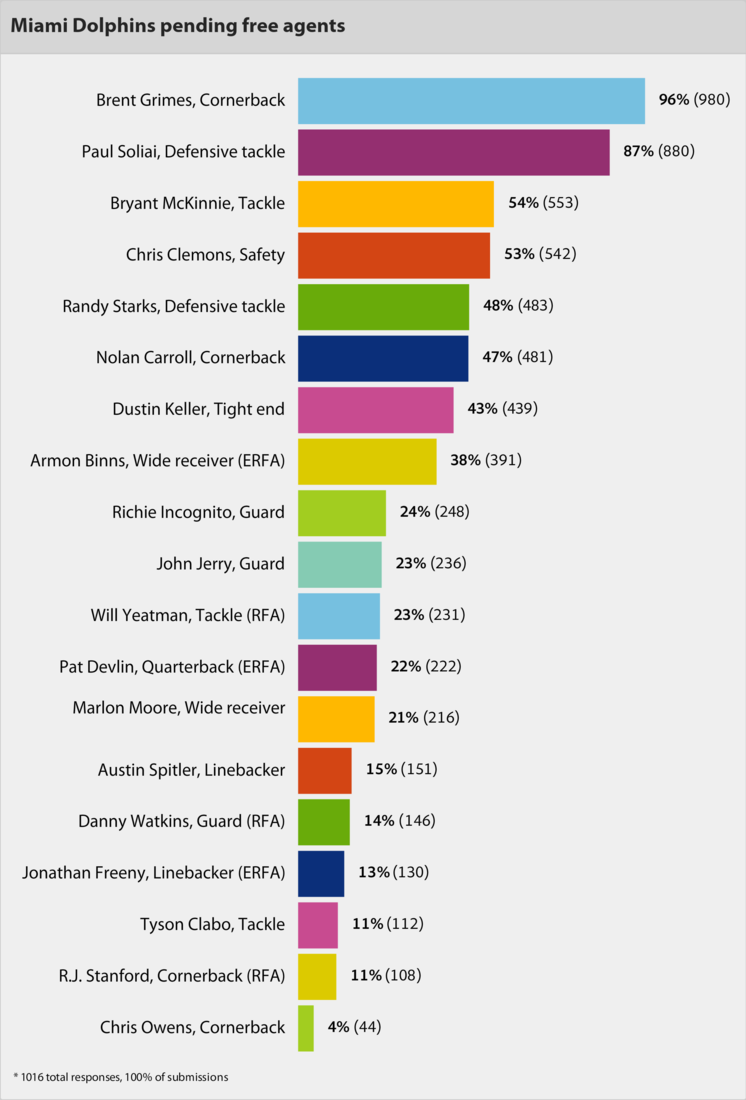 None of the results are all that surprising. Brent Grimes and Paul Soliai are clearly the "must re-sign" for the Dolphins.  After that, Bryant McKinnie, Chris Clemons, Randy Starks, Nolan Carroll, Dustin Keller, and Armon Binns are seen as "would like to have back" candidates.  Richie Incognito, John Jerry, Will Yeatman, Pat Devlin, and Marlon Moore are the next tier, a kind of indifferent section of the board.  And, finally, Austin Spitler, Danny Watkins, Jonathan Freeny, Tyson Clabo, R.J. Stanford, and Chris Owens all fall to the bottom of the list, making them the players that you don't see returning to the Dolphins in 2014.

We also asked you, if you felt so inclined, to include comments on your submission, telling us why you voted the way you did.  Here are some of those (all bullets are as submitted, without editing):