Dolphins at Lions final: Lions come back to win 20-16 in final minute

The Miami Dolphins and Detroit Lions have completed a back-and-forth contest in Week 10 of the NFL season.

Share All sharing options for: Dolphins at Lions final: Lions come back to win 20-16 in final minute

The Miami Dolphins and Detroit Lions have battled to a

The game started with Miami winning the coin toss and electing to defer. Detroit took the opening kick, and immediately began working down the field. Other than a Cameron Wake sack of Lions quarterback Matthew Stafford, the Dolphins defense could not find a way to stop the Detroit attack. They did eventually force a 4th-and-6, only to see Detroit run a fake punt and pick up 24 yards.

The drive continued, and the Dolphins continued to struggle to stop Detroit. Even when a defensive play for Miami went well, a penalty always seemed to be called. Wake was offsides on the third play of the drive, Jared Odrick was offsides three plays later, and Philip Wheeler was called for unnecessary roughness for a helmet-to-helmet hit two plays after the fake punt.

Miami was able to slow down the drive eventually, forcing a field goal from Detroit.

The Dolphins offense looked even worse than the defense, losing yards on a first down run by Lamar Miller and a sack of Ryan Tannehill on second down. On both plays, Ndamukong Suh blew up the offensive line, making the plays in the backfield. Miller would pick up five yards on third down, just to give Brandon Fields some punting space.

The Detroit drive on the next possession would last one play, when Stafford found Calvin Johnson 49 yards down the field for the touchdown.

The Lions took a 10-0 lead with four minutes remaining in the first quarter.

Getting the ball back did not held Miami, who again lost yards on two-of-three offensive plays. On first down, a reverse was dropped eight yards behind the line of scrimmage, a second down throw from Tannehill to Jarvis Landry gained six yards before Tannehill was sacked for a second time, this time for an 11-yard loss. Ziggy Ansah was the story for the Lions on the drive, recording both the tackle of a loss on the first down play and the sack on third down. Miami again had to punt.

Miami's defense started to find themselves, however, on the next drive, forcing Detroit into a three-and-out after a penalty on Calvin Johnson for offensive pass interference negated a 13-yard completion.

The Dolphins would end up punting on the next drive, though, after picking up a first down, then moving to a 4th-and-1 play when Miami ran their own fake punt. Jordan Kovacs, who was signed this week after an injury to Michael Thomas landed him on injured reserve, converted on the direct snap, but Miami was called for an illegal shift given nearly every member of the punt team was still moving at the snap. The Dolphins punted on the 4th-and-6 play.

The next drive would see the third attempted fake punt of the game, this time from Detroit. After moving 48 yards on six plays, the drive appeared to stall when the Lions again lined up to punt. This time, they attempted a throw to the gunner, but Walt Aikens quickly made the tackle and the Dolphins took over.

The game got a little more odd on the next drive, when Miami moved 43 yards down to the Detroit 19-yard line, only to see Tannehill throw an interception. After a 70-yard return, Tannehill made the tackle as his head was being turned around on a facemask penalty. On 1st-and-10 from the Miami 31-yard line, Stafford looked for Johnson in the endzone, but cornerback Brent Grimes used his full vertical leap to go up and get the ball.

Miami then drove the field from their own 20-yard line down to the Lions' 5-yard line, only to have to settle for a field goal. The story of the drive, however, may be the injury to left tackle Branden Albert. On the first play, Albert's knee was rolled up, and he was carted off the field. Rookie right tackle Ja'Wuan James was moved to left tackle to replace Albert and Dallas Thomas moved from guard to tackle to fill in for James. Nate Garner replaced Thomas.

Detroit would kneel after the kickoff and the half would end with the Lions leading 10-3.

The second half did not start any better for Miami, who received the opening kickoff, only to see Daniel Thomas fumble on the second play. Ziggy Ansah made a great punch at the ball, knocking it loose for Suh to recover at the Detroit 44-yard line.

Detroit would do nothing after the turnover, though, gaining just three yards on five plays.

After a 30-yard punt and five yard return, with an additional 15 yards added for a personal foul late hit on returner Landry, MIami started with the ball at their own 43-yard line. They would start to find a rhythm on offense, with Tannehill connecting with Charles Clay and Damien Williams on the drive, as well as runs from Williams and Tannehill. After seven plays, Miami had gained 25 yards, with Caleb Sturgis connecting on a 50-yard field goal to pull to within four of the Lions.

Detroit would attempt to answer on their next possession, driving 53 yards on 12 plays. The highlight of the drive would be Miami's when, on a 42-yard field goal attempt, Earl Mitchell below up the protection and blocked the kick straight up the middle. Dion Jordan picked up the ball and returned it all the way to the Detroit 4-yard line, where, on the next play, Tannehill connected with Mike Wallace for the touchdown and a Dolphins lead. 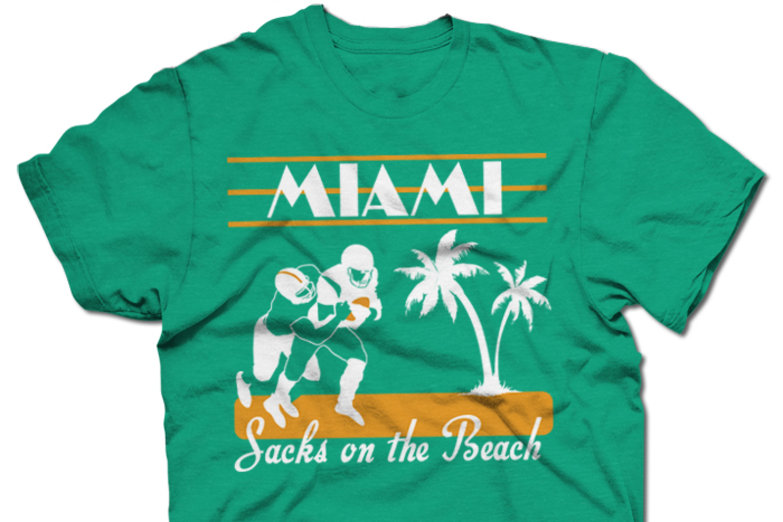 The Dolphins continued their season long abuse of opposing quarterbacks today against the Lions. Check out the t-shirt we have in their honor.

Detroit would take their next possession just prior to the end of the third period, trailing for the first time all day. Assisted by a Jamar Taylor facemask penalty, the Lions would move 50 yards, into Miami territory before Cameron Wake would come up with his second sack of the game, pulling down Stafford for a 9-yard loss. Detroit would settle for a 50-yard field goal from Prater, and the tie at 13 all.

The Dolphins would re-take the lead on the next possession.  Eating up nearly eight minutes on the clock, the Dolphins worked through the air to move 70 yards, including several big receptions from Clay. At the end of the drive, however, Clay would not be able to come up with the reception in the endzone, and the Dolphins would settle for the 20-yard field goal from Sturgis.

Detroit and Miami would trade three-and-outs on their next two respective drives.

The Lions would piece together another scoring drive with their final possession, going 74 yards in 11 plays to take the four point lead. With just 29 seconds to play, the Dolphins would get the ball back at their own 20 yard line, but would not be able to do anything with it and they would drop the game 20-16.

Miami falls to 5-4 on the season, with a game against the Buffalo Bills on Thursday. The Lions improve to 7-2 and will face the Arizona Cardinals next Sunday.