The Miami Dolphins and Denver Broncos have reached halftime. We take a look back at the first 30 minutes, and open the thread to chat about all of the second half action.

The Miami Dolphins and Denver Broncos have reached the midway point of their Week 12 contest.

The game opened with the Dolphins receiving the opening kickoff, and immediately moving down the field. After a touchback, Miami began attacking the Broncos' defense, using running back Lamar Miller and quarterback Ryan Tannehill to get the ball down into the redzone. Highlight by big plays, including a 22-yard run from Miller, a 16-yard pass from Tannehill to tight end Dion Sims, starting in place of the injured Charles Clay, and a 20-yard catch and run from Tannehill to rookie receiver Jarvis Landry, the Dolphins would move to the Denver three yard line. On a carry on second down, running back Daniel Thomas was able to punch the ball in for the score.

The touchdown marked the first opening drive score allowed by Denver in their last 13 games. 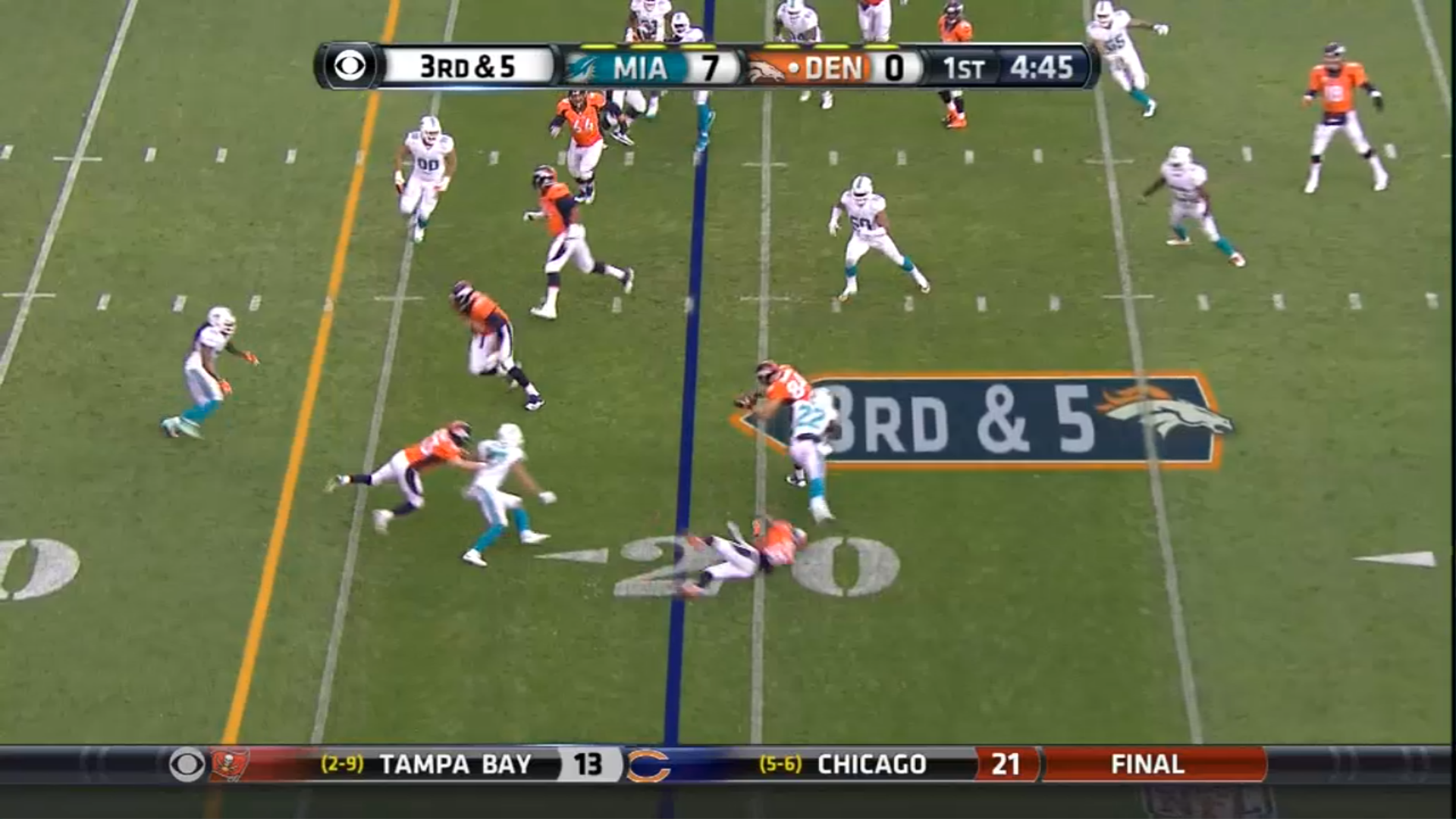 Jamar Taylor ends the Broncos first possession with a tackle for loss on 3rd-and-5.

The Broncos would find early success as well, taking the attack straight at the Miami defense. The Dolphins repeatedly missed tackles on the drive, which moved 53 yards in 12 plays before Jamar Taylor was able to shut down the drive with a one-yard tackle for a loss on a 3rd-and-5. The Broncos would settle for a 38-yard field goal, bringing the score to 7-3.

The Dolphins and Broncos would then trade three-and-out possessions.

Miami would start their third drive at the Denver 47-yard line after a 17-yard punt return from Landry. Tannehill would again direct a scoring drive, running for seven yards, then passing for six before giving the ball to Lamar Miller for nine yards as the first quarter ended. The second period opened with an 11-yard gain from Miller, followed by a 10-yard pass from Tannehill to wide receiver Mike Wallace. After a three-yard pass to Sims, ending at the Broncos' one-yard line, Tannehill ran the 2nd-and-1 play into the endzone for the score and a 14-3 Miami lead.

Denver would again answer, taking the ball at their own 23-yard line and working it back down the field. Working primarily out of a no-huddle shotgun, the Broncos would cover the 77 yards in 11 plays, with Manning finding Demaryius Thomas for a five-yard score.

The end of the first half turned into a shoot out, as Miami again came out and score, going 87 yards in 10 plays to score on a Tannehill to Wallace pass for 10 yards. The Broncos would then respond with a 8-play, 80-yard drive capped with another Demaryius Thomas score, this one from 14-yards out.

The Dolphins did suffer a couple of key injuries in the half, with Jared Odrick and Ja'Wuan James both having to go to the sideline.

Reaching halftime, the Dolphins lead 21-17. Denver will get the ball to start the second half.