The Miami Dolphins crushed the San Diego Chargers on Sunday.

The Miami Dolphins destroyed the San Diego Chargers for a Week 9 blowout win in South Florida.

The Chargers took the opening kickoff and began to find some success following a first down sack of quarterback Philip Rivers by Miami defensive tackle Randy Starks. Rivers would direct a 13 play drive, gaining 57 yards and into Miami territory. On 4th-and-1 from the Miami 22, San Diego decided to go for it, but Dolphins safety Reshad Jones blew the play up in the backfield, tackling Brandon Olivier for a one-yard loss and a turnover on downs.

Miami's offense, which has consistently opened slowly this year, broke that streak on their opening drive. Dolphins quarterback Ryan Tannehill opened the drive with a nine-yard pass to Jarvis Landry. After a seven-yard run from Lamar Miller, Tannehill then found tight end Charles Clay for 24 yards. Another Miller run was followed by Tannehill to Mike Wallace for five yards. After a San Diego penalty, then a Dolphins penalty, Tannehill again found Landry for 13 yards, followed by a six yard run from Miller. Back to the pass on 1st-and-10 from the Chargers' 13-yard line, Tannehill found Brian Hartline for six yards. A run from Miller on 2nd down gained one yard, before Tannehill connected with Clay in the back of the endzone for the touchdown and a 7-0 Miami lead. The Dolphins drove 77 yards in 10 plays over 5:56 for the score.

San Diego took control of the ball at their own 26-yard line following the kickoff, and would go three-and-out, punting on the first play of the second quarter. 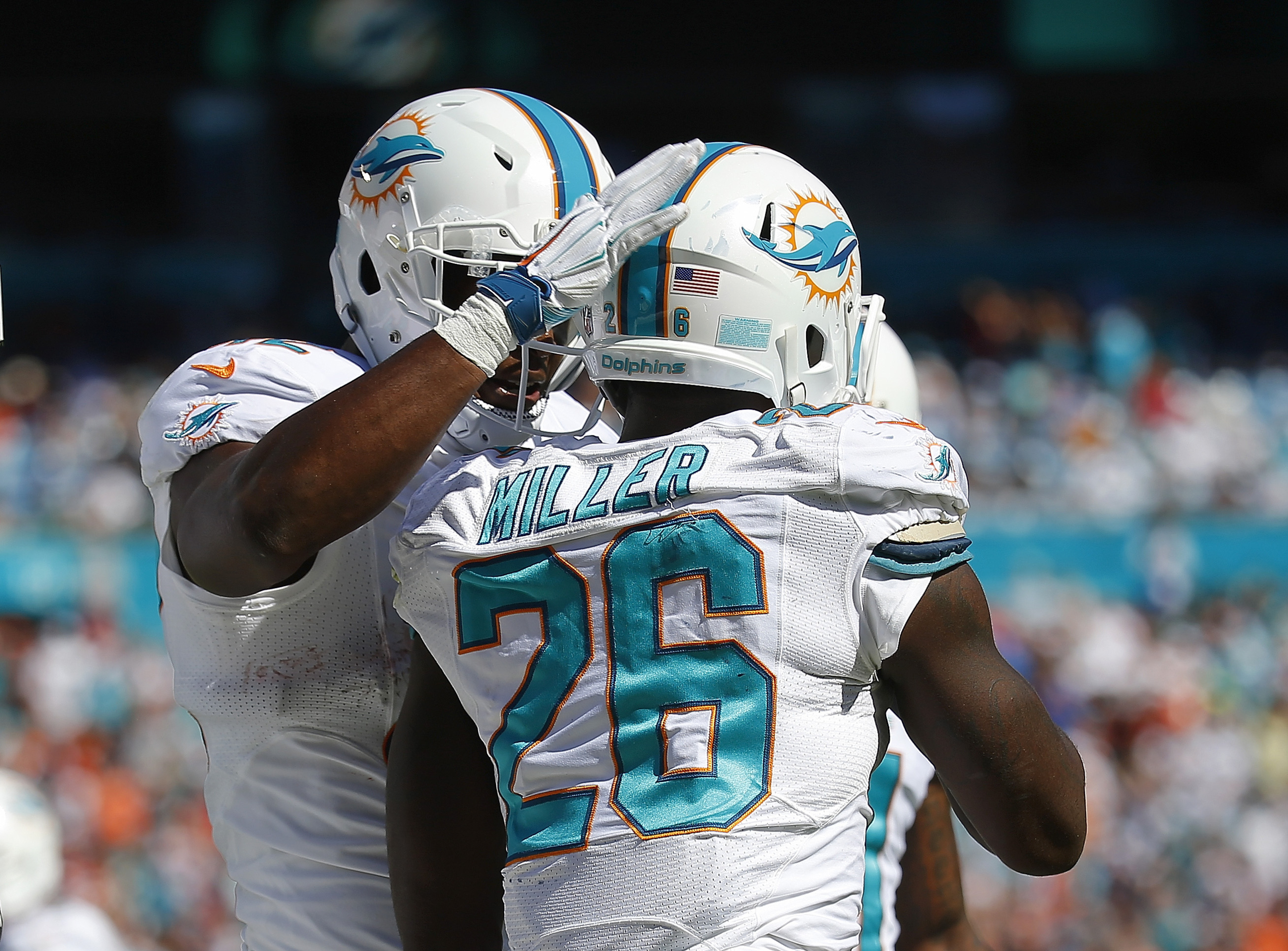 Running back Lamar Miller #26 of the Miami Dolphins celebrates his second quarter touchdown against the San Diego Chargers during a game at Sun Life Stadium on November 2, 2014 in Miami Gardens, Florida. (Photo by Chris Trotman/Getty Images)

The Dolphins continued their fast start after the punt, this time primarily using Tannehill. A first down run for four yards was followed by the first incompletion of the game for Miami's quarterback, coming on a bad drop from Lamar Miller. Then Tannehill hit Landry for seven yards and Clay for 18 yards before a 22 yard run from Tannehill. He then connected with Miller for eight yards on 1st-and-goal from the Chargers 10-yard line.  On second- and third-downs, Miami turned to Miller, who ran for no gain on his first carry of the drive followed by a two-yard touchdown run. With the Caleb Sturgis extra point, Miami took a 14-0 lead after the eight play, 61-yard drive over 3:42.

The Chargers early struggles would continue when Rivers threw an interception to Reshad Jones on the team's first play of their next possession.

Miami would move 23 yards after the pick, getting down to the Chargers eight yard line before Sturgis connected on a 26-yard field goal. Miami took a 17-0 lead with 8:53 remaining in the first half. 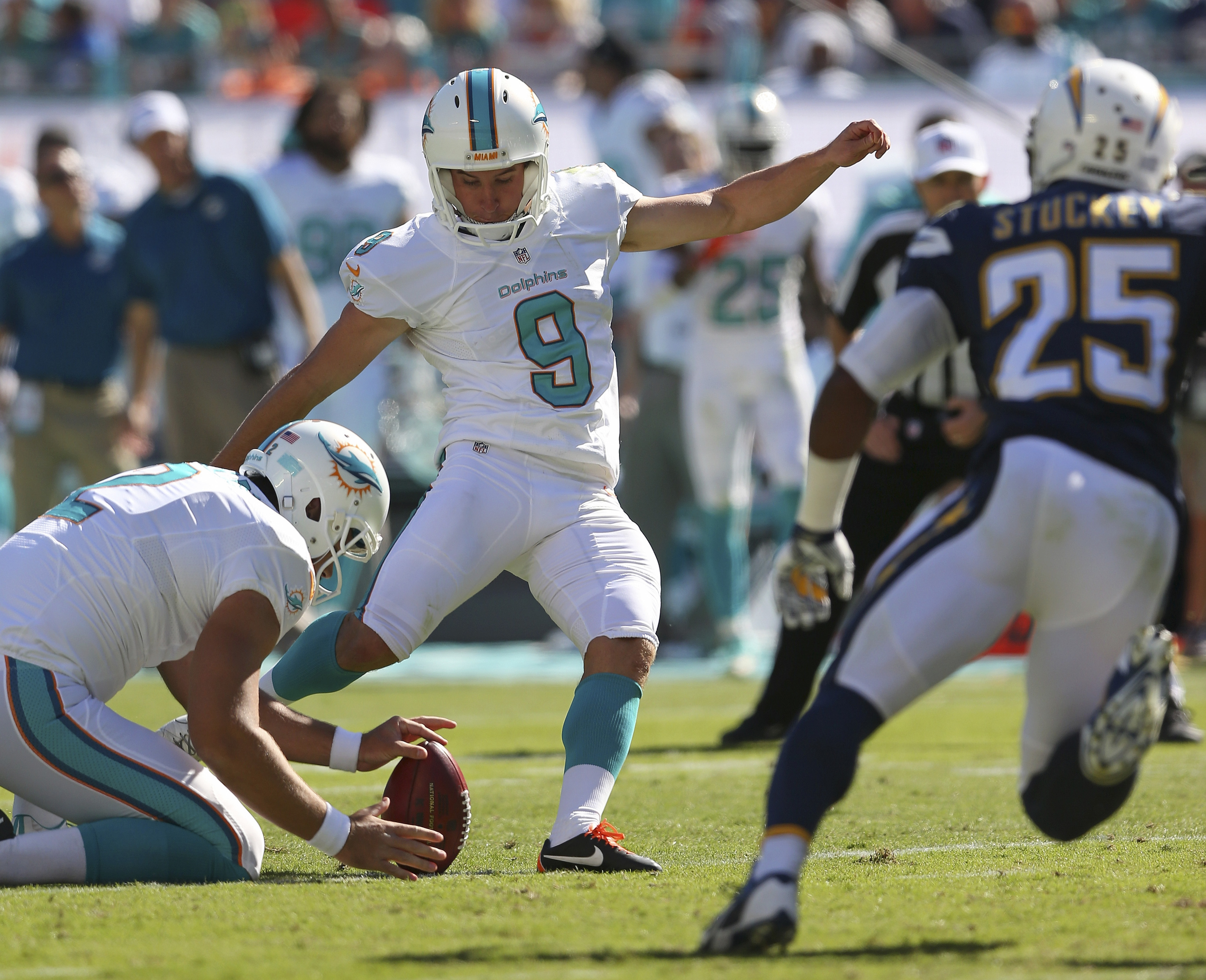 The Chargers were able to connect on a 15-yard pass from Rivers to Keenan Allen on first down of their next drive, but would fail to gain another first down and would punt back to Miami.

The Dolphins would again move the ball on the Chargers' defense, with Tannehill throwing the ball all over the field, and to every potential receiver available.  After 11 plays and 63 yards, Miami again turned to Sturgis who connected from 25 yards to give the Dolphins a 20-0 lead.

San Diego again would pick up one first down before punting the ball back to Miami with just over a minute to play. in the half. The Dolphins would take the ball back down the field, but Sturgis would miss this time, pushing the ball wide right.

Tannehill ended the first half with 208 yards passing on an 18-for-25 performance with the touchdown pass and a 110.1 passer rating. He has also run for 36 yards on three carries. Lamar Miller has added 33 yards on seven carries. Tight end Charles Clay leads the team with 48 yards receiving on three catches, followed by Mike Wallace with 43 yards on two receptions.

The second half continued Miami's dominance, with the team getting the opening kickoff and taking it down the field for more points.  Tannehill worked the ball to Hartline and ran, Miller added some yards on the ground, and Wallace got involved in the drive on an attempted pass he threw out of bounds deep down the field when Hartline was double covered. The eight-play drive covered 72 yards and was capped by a Tannehill pass to Rishard Matthews for 21 yards and the score.

San Diego's opening drive was cut short after six plays and 17 yards when Rivers threw his second interception of the day, this one to Miami cornerback Brent Grimes, who returned it to the San Diego 19-yard line.

Miami would settle for a field goal after the turnover, with Sturgis connecting from 23-yards for his third conversion on four tries for the day.

Three plays into their next drive, the Chargers would again turn over the ball with another Rivers to Grimes interception.

Miami would punt on the subsequent drive. San Diego would then turn over the ball on a third-straight possession when Rivers was sacked by Olivier Vernon who stripped the ball. Jared Odrick recovered the loose ball.

Tannehill would take advantage on the next play, connecting on a 14-yard touchdown pass to Jarvis Landry.

San Diego got the ball back with two minutes remaining in the third quarter, trailing 37-0. They pulled Rivers, later reporting he had a hand injury, and replaced him with Kellen Clemons. The Chargers would punt five play later in a defensive stand by Miami that included  sack from defensive end Cameron Wake in which he beat Clemons to the back of the quarterback's drop.

Opening the fourth quarter, Miami pulled Tannehill for Matt Moore. Miami would punt after six plays, giving the ball back to the Chargers.

San Diego would have to punt after five plays, with Miami then running the ball to all but kill the clock. Turning over the ball after a running play on 4th-and-8 from the Chargers' 11 yard line, Miami then stopped the Chargers on their first down run and the end of the contest. 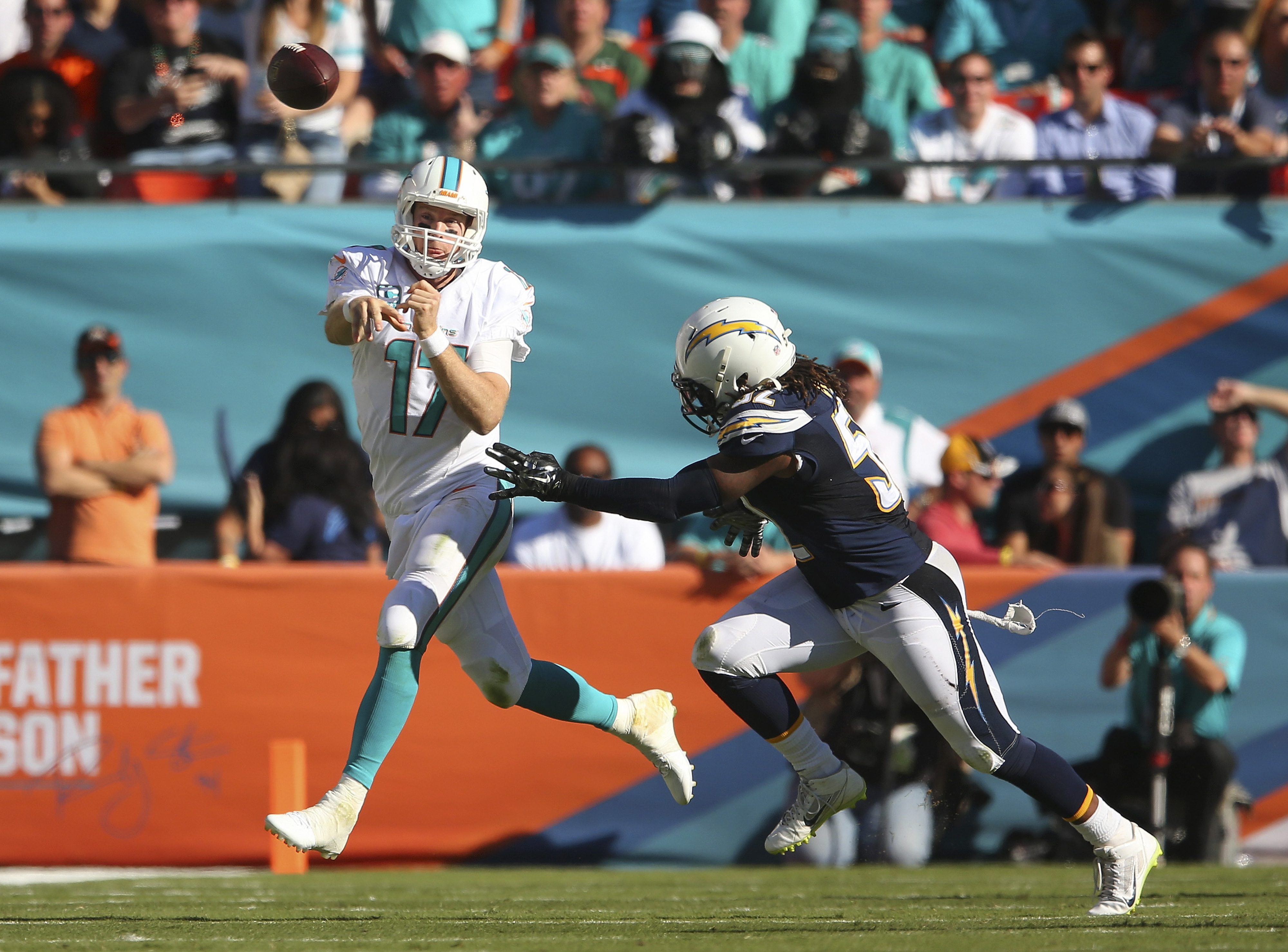 Quarterback Ryan Tannehill #17 of the Miami Dolphins throws under pressure from linebacker Melvin Ingram #54 of the San Diego Chargers during a game at Sun Life Stadium on November 2, 2014 in Miami Gardens, Florida. (Photo by Mike Ehrmann/Getty Images)

Tannehill finished the game 24-for-34 for 288 yards with three touchdowns and a 125.6 passer rating, all in just three quarters of play. He also had four carries for 47 yards. Miller was only asked to carry the ball 11 times on the day, gaining 49 yards for a 4.5 yards per carry average. Damien Williams, who played much of the second half, added 11 carries for 28 yards while Daniel Thomas had 9 carries for just 8 yards. 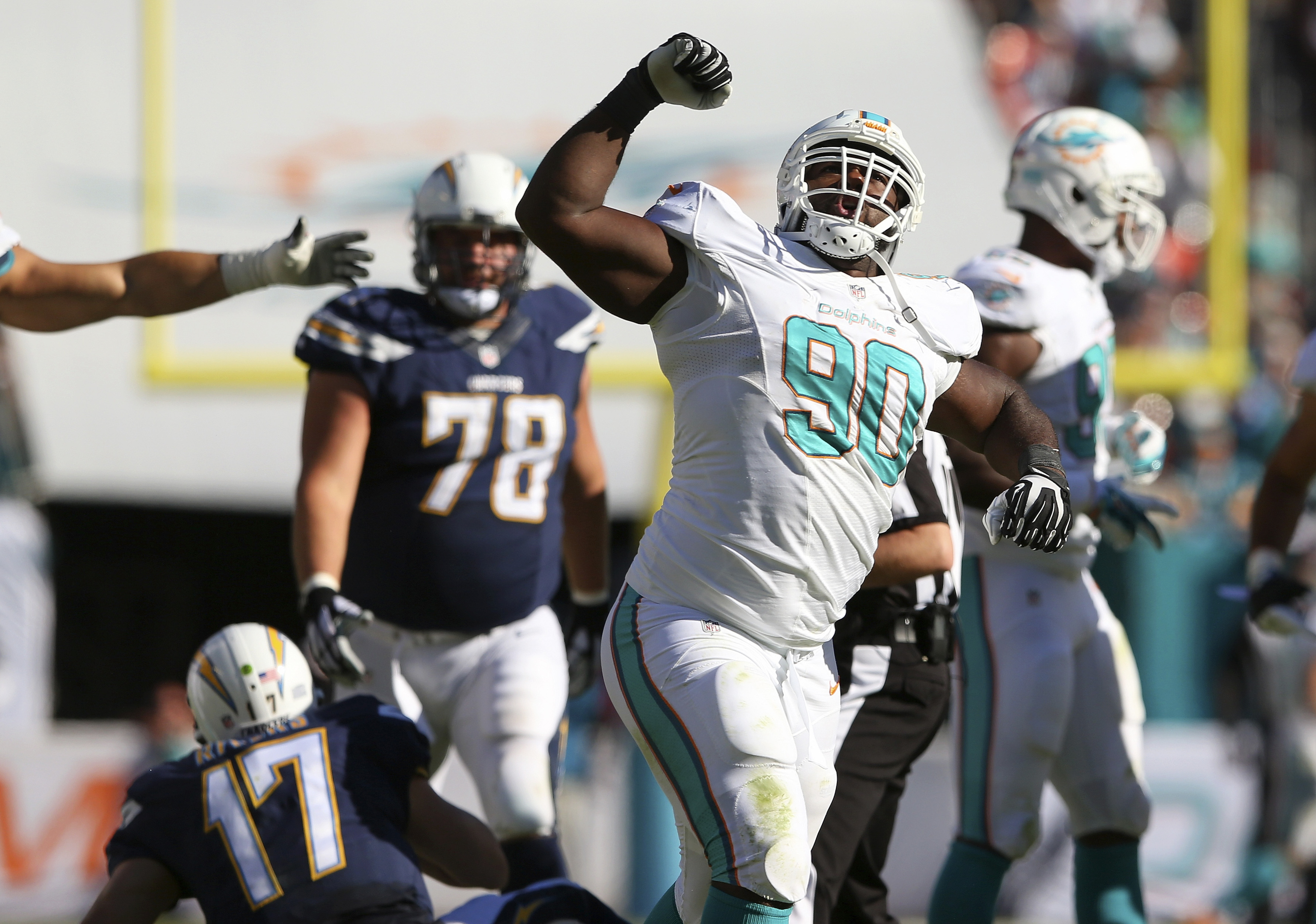 Defensive tackle Earl Mitchell #90 of the Miami Dolphins celebrates his sack of quarterback Philip Rivers #17 of the San Diego Chargers (below) during a game at Sun Life Stadium on November 2, 2014 in Miami Gardens, Florida. (Photo by Mike Ehrmann/Getty Images))

The Dolphins defense held Rivers and the eighth ranked passing offense entering the day to just 138 yards passing with three interceptions. Rivers had a 31.0 passer rating. Miami sacked him four times, with Cameron Wake, Earl Mitchell, Randy Starks, and Olivier Vernon all recording one, Vernon's including a fumble which Jared Odrick recovered. Brent Grimes picked off two passes, while Reshad Jones, who also led the team in tackles with five, recorded the other pick.

Miami improved to 5-3 on the year with the win, while San Diego falls to 5-4. The Dolphins hit the road to face the Detroit Lions next week, while the Chargers have their bye week.