The Miami Dolphins leveled the season series with the Buffalo Bills, coming away with a Week 11 win 22-9. Who saw their stock rise or fall during the game?

Stock Up: Ryan Tannehill, quarterback - Tannehill once again went over 100 on his passer rating, his fourth such performance in the last seven games for Miami. He did have a sloppy fumble, where he did not secure the ball well enough as he was running, but it ultimately did not have an impact on the game. Tannehill is looking more and more comfortable in the offense, and the Dolphins, while still struggling in the red zone, are finding ways to get the lead late in each of their last seven games, though they dropped two of those on last minute touchdowns from Aaron Rodgers and Matthew Stafford. Tannehill has climbed to 11th in passing yardage on the season, is 9th in completion percentage, 10th in passing touchdowns, and 16th in passer rating. Everything seems to be trending up for the Dolphins' third-yard quarterback right now.

Get your "Sacks on the Beach" t-shirt here 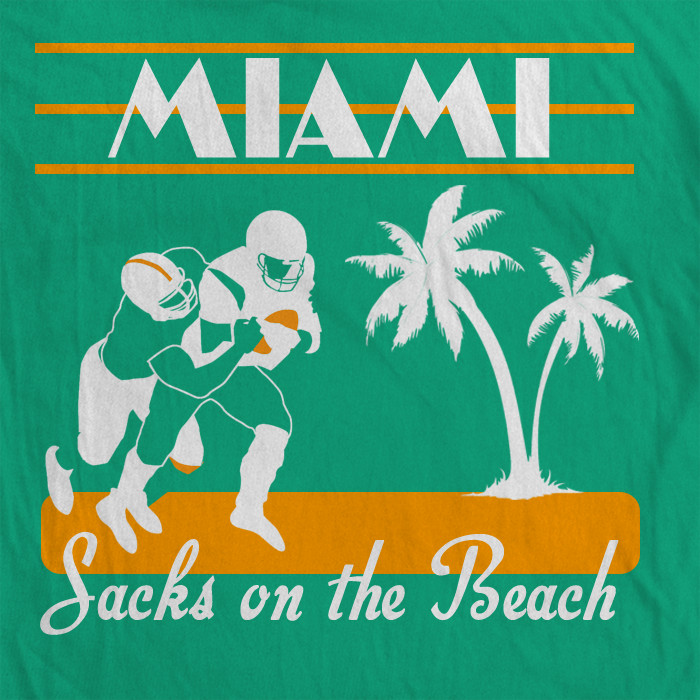 Stock Down: Damien Williams, running back - Where did Williams go in this game? Seriously. He had nine snaps, and they all came on passing plays. No carries for Williams against the Bills a week after picking up 34 yards on seven carries. It looked like Williams was establishing himself ahead of Daniel Thomas on the running back depth chart, but Williams did nothing while Thomas played 24 snaps and had five carries for 23 yards - not spectacular, but better than anything Williams did. The undrafted rookie was able to pick up 38 yards on two receptions, but he just did not seem to be involved in the game plan on Thursday night.

Stock Up: Jamar Taylor, cornerback - Picking up his first career start, the second-year cornerback had a pretty good performance. Playing opposite Brent Grimes, Taylor is going to be the cornerback offenses target, and he performed decently on the day. Things were not perfect, but he was at least steady enough to not be a liability. Taylor led the team in tackles, had a beautiful tackle for a loss, and he continued to get better as the game went on. He is not in position to challenge Cortland Finnegan, who missed the game with an ankle injury, for the starting role, but he at least showed he can compete and he did get some great experience.

Stock Down: Dallas Thomas, right tackle - It was a rough day for the second year offensive lineman, making his first start at right tackle. A lot of people are crushing Thomas for his performance, allowing two sacks on the day as well as several hurries, but he was also being asked to start at an unfamiliar position against Mario Williams, and the Dolphins routinely asked him to do it without any assistance. It was a bad performance, but it may not be a true indication of whether or not Thomas can grow into the position. This week, the Dolphins should look at other players to fill the position (Nate Garner, Jason Fox), and Thomas' stock is definitely down after that performance, but remembering who he was facing is important in getting a true read for how far down his stock should fall.

Stock Up: Reshad Jones, safety - Jones is playing like the 2012 Jones, and it's impressive. He's playing the run. He's rushing the passer. He's covering receivers. Jones really does look like the safety that Miami gave an extension before last season. After missing the first four games of the season, Jones is playing like a Pro Bowler now.

Stock Down: Dion Jordan, defensive end - This has nothing to do with his play on the field, but more to do with the amount of time he is not on the field. The only defensive player to take fewer snaps on the day (among players who appeared in the game) was linebacker Philip Wheeler. Jordan was only on the field for 26-percent of the defensive plays. Jordan, who missed the first six games of the season as he served two drug suspensions, is just not a major part of the defense right now.

Bonus Stock Up: Brian Hartline, wide receiver - It is worth noting the re-emergence of Hartline in this game. He only caught three passes on four targets, but he gained 55 yards to lead the team and had a beautiful 31-yard catch and run. Pro Football Focus pointed out that Hartline's 43 yards after catch on Thursday was his highest of the season, and out performed his total yards after catch from the past five games, when he combined for 20 yards. Hartline deserves a stock up rating in this game.