A thorough report card on the first quarter of the Miami Dolphins' 2014 NFL season.

We are through with one quarter of the 2014 NFL season, and while the rest of the NFL continues into the next quarter of football, the Miami Dolphins have time to rest and recooperate on a bye week.

Since we have no Dolphins football to look forward to this week, it's time to reflect on the short season that has been so far and hand out a quarter-season report card to this injury-marred 2-2 team.

The Dolphins run game has been surprisingly good in 2014. Heading into the season, and throughout the preseason, the lack of running game was one of the most troublesome issues that this team had. However, Miami has silenced those worries.

The Dolphins found success early in the season with Knowshon Moreno (who was the NFL's leading rusher after Week 1) and were able to keep the running game going when Moreno dislocated his elbow.

Lamar Miller has stepped up in a big way for Miami's offense. Miller, who has started every game this season but took a backseat to Moreno early, is sixth in the NFL in total rushing yards and fourth in the league (among running backs with at least 20 carries) with 5.7 yards per attempt.

The Dolphins rushing success early in the season is a huge testament to the makeshift offensive line that is without it's Pro Bowl center in Mike Pouncey.

The only negative with this surprisingly good unit is fumbling issues. The Dolphins are second in the league with four fumbles (two lost).

The passing attack, much like the ground game, hasn't lived up to expectations. Unfortunately, in this instance, the expectation was for the passing offense to be good.

The Dolphins are 19th in total passing yards and 31st in yards per attempt (5.8) with only the Oakland Raiders trailing them.

Ryan Tannehill has performed questionably in three of the Dolphins four opening games. Tannehill has an overall rating of 81.2 after earning a 109.3 rating against the Raiders in London (keep in mind that passer rating is more of a team stat). Tannehill, who has lacked consistency in his career, has struggled early this season, but after a strong performance in London it's time to see if he can build some positive consistency in the coming weeks. 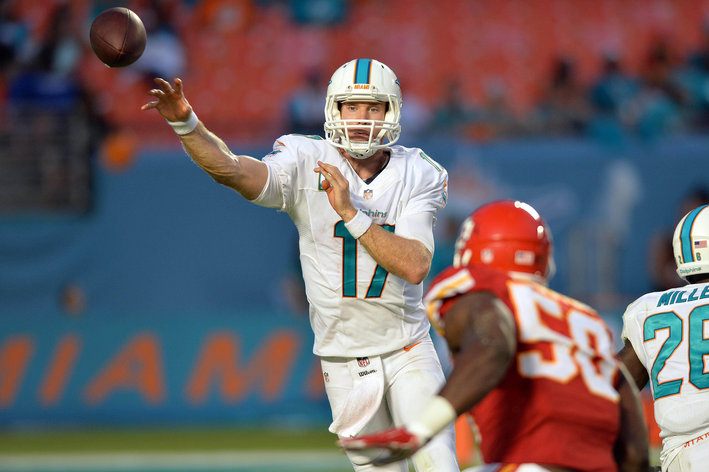 Complimenting Tannehill's early struggles are the drops that have plagued Dolphin receivers. Everyone of Miami's main targets has dropped at least one pass this season, many of them coming on third downs in crucial situations.

The Dolphins offensive line has protected Ryan Tannehill twice as good this season. Miami has allowed nine sacks this season, 11th in the NFL. At this time last season, Miami had allowed 18.

This unit has potential to be so much better than it has been in this first quarter of the season, highlighted by the performance against the Raiders in Week 4. This next quarter will give us a great gauge on the passing game as Miami will likely be throwing it a plethora of times while facing the grueling stretch that's coming up on the schedule.

The Dolphins have been inconsistent at stopping the run this season, but overall have been adequate in this area.

The Dolphins will get a huge boost to this unit when linebacker Koa Misi returns from his ankle injury after the bye week.

The Dolphins pass defense has been great at times and downright awful in others. As stated in the section above, the Dolphins are built to play with a lead and make an opposing offense one-dimensional.

When the Dolphins build a lead, such as in the games against the Patriots and Raiders, their pass defense is very good. Miami accumulated three interceptions and six sacks in these two games and allowed a passer rating of 69.

When the Dolphins fail to build a lead, however, the results are much different. Against the Bills and Chiefs, the Dolphins pulled down zero interceptions and allowed a passer rating of 117.3. Interestingly enough, the Dolphins did manage five sacks in these two games.

The Dolphins defense is ninth in the NFL in passer rating allowed (85.2), sixth in passing yards allowed per game (215) and 21st in passing touchdowns allowed this season (7 in four games).

The Dolphins are tied for seventh in the NFL with a 27 yard kick return average. Rookie returner Jarvis Landry has performed admirably in this category.

Where the trouble comes for Landry is punt returns. Miami is tied for 20th in the NFL with 5.7 yards per punt return. Landry's long is only 16 yards (also 20th in the NFL) and he has made a few blunders, including muffing a punt inside his own 10 yard line  (pictured below) and a fumble on a return against the Raiders. 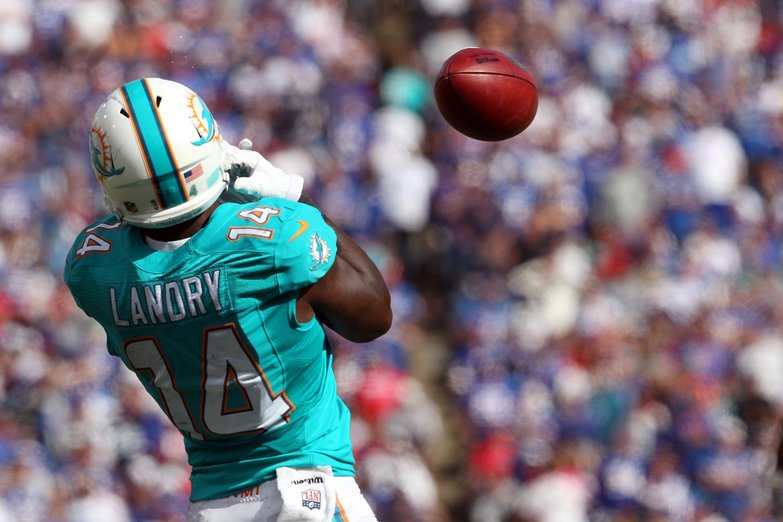 Landry's punt returner job may soon be in danger as long-time returner Marcus Thigpen has made his way back onto the Dolphins roster, albeit on the practice squad.

The Dolphins have allowed the most punt return yards in the league and have allowed a touchdown on a kickoff return. Simply put, this unit has been atrocious. It must get better, and the return of key starters will bolster this unit by returning backups, such as Jason Trusnik, to their roles as key special teamers.

Caleb Sturgis has only missed one field goal this season. Sturgis has become more consistent after his roller coaster 2013 season, but Pro Bowl punter Brandon Fields has struggled a bit. Fields is 24th in the NFL with a 44.2 yard average per punt and 26th in the league with only four punts downed inside the 20. Field usually is at the top of the league in these categories.

The Dolphins have converted only 38.2% of their third downs this season, enough to be ranked 23rd in the league in this category. 38.2% is simply not good enough on this crucial down.

The Dolphins have scored 24 points per contest this season with scores of 33, 10, 15 and 38. The Dolphins must be more consistent in their point scoring, which starts with being more efficient on third downs.

Miami has turned the ball over six times in four games. This is an obvious issue that must be corrected in the bye week.

The sloppiness that has persisted throughout these first four weeks of football must be cleaned up on all phases of the ball for the Dolphins to improve upon their .500 record.

The Dolphins are 13th in the NFL in points allowed this season. Miami has allowed 24.2 points per game this season.

Miami's defense is 12th in the league in getting off the field on third down. Miami is allowing 40% of third downs to be converted against them.

Miami has scored one touchdown on defense on a Cortland Finnegan fumble recovery against the Raiders.

OVERALL TEAM GRADE THROUGH ONE QUARTER OF THE SEASON: C+

The Dolphins are at 2-2 after one quarter of the 2014 season. They have been inconsistent and have shown both the potential to be a playoff team and a team that will pick top-10 in the draft next year. The Dolphins must execute consistently throughout the next quarter to become a winning team.

Check back for a half-season report card after the Dolphins Week 9 game against the San Diego Chargers.