Share All sharing options for: Derrick Shelby arrested for trespassing, resisting an officer

The Miami Dolphins did not make it through their bye week without some drama, as it was reported today that defensive end Derrick Shelby was arrested on Saturday in Fort Lauderdale. According to the report from South Florida Sun-Sentinel reporters Brett Clarkson and Omar Kelly, Shelby was arrested for resisting an officer (without violence) and trespassing. 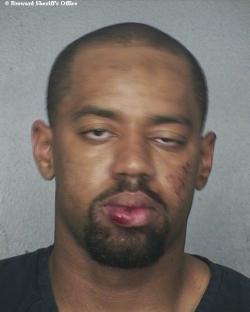 A 2012 undrafted free agent, Shelby has grown into a solid reserve for the Dolphins, splitting time this season between defensive end and defensive tackle.

As Clarkson and Kelly point out, this is the first Dolphins player in legal trouble since Chad Johnson's 2012 arrest for domestic violence when he head butted his wife, Evelyn Lazado.

Shelby was arrested at 2:30am Saturday morning, and was released several hours later. His mug shot clearly shows there was some sort of violence involved in the situation, despite the "without violence" on the arresting charges. More on this story as it becomes available.