Miami Dolphins quarterback Ryan Tannehill threw an interception just as the team was getting ready to score a touchdown against the Jacksonville Jaguars. We take a look at the play.

Share All sharing options for: Dolphins film study: A look at Ryan Tannehill's interception vs Jaguars

The Dolphins chose to throw the ball on first down, running three routes off a play action pass. The Jaguars lined up with the cornerbacks all playing man-to-man, with the linebackers and safeties responsible for zones across the endzone. 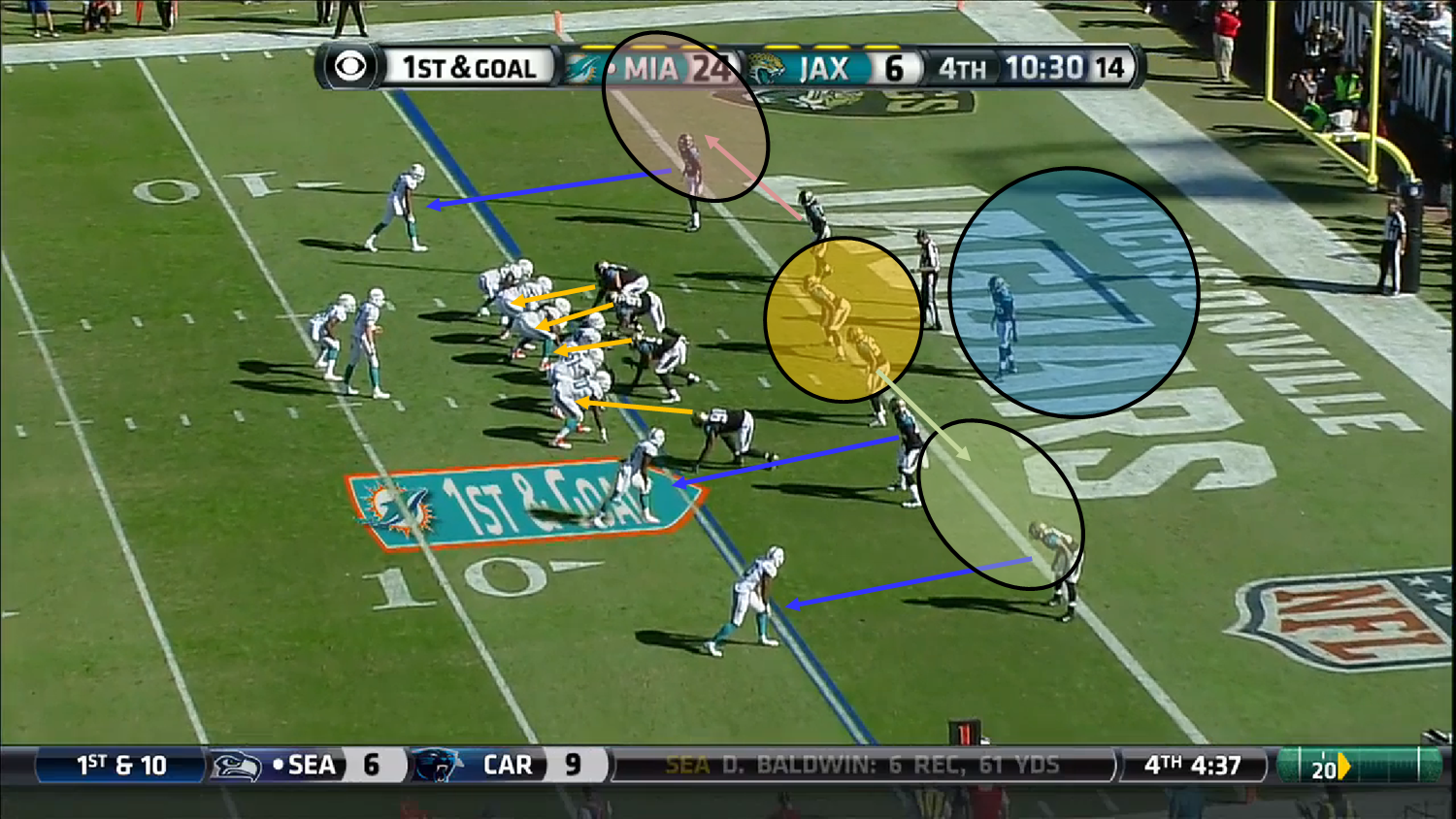 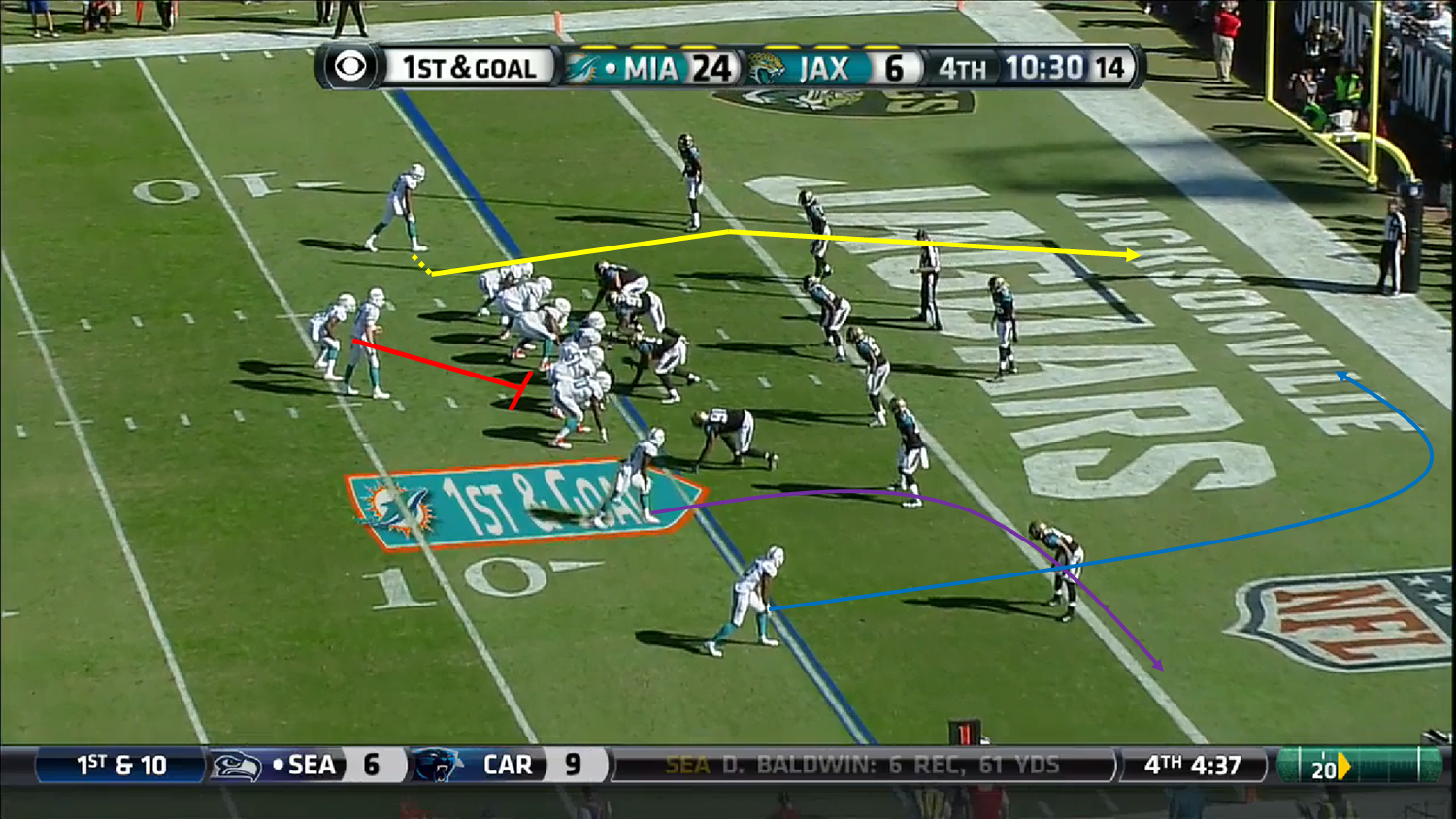 (Use the slider to see the play design for both teams.)

One oddity on this play can immediately be seen for the Miami offense. The team is lining up with three wide receivers, Rishard Matthews at the top of the image, rookie Jarvis Landry in the slot to the bottom of the offense, and Brandon Gibson spread wide. Tight end Charles Clay is lined up to the top of the offensive line, but he will stay in to block, as will running back Daniel Thomas, who is lined up in the backfield, after a play action fake to him.

Matthews comes in motion at the top of the screen, but he only comes down to line up on Clay's hip, with the defense only real adjustment being cornerback Demetrius McCray walking a few steps toward the middle of the field.

Switching to the endzone view, we can see the defensive alignment just before the snap, as quarterback Ryan Tannehill sees it. There is going to be a lot of traffic in the middle of the field on the play, which can already be seen, given the sheer number of defenders who are sitting right in front of Tannehill.

The one moment where it appears this play may work is just as Tannehill fakes the handoff to Thomas, with the linebackers and safety all reacting by taking a step toward the line of scrimmage. That movement should open the middle of the endzone for Matthews' post route. Unfortunately for Miami, the defenders are quick to read the fake and start moving back into their zones.

From the All-22 film, we can see the area where Tannehill is going to try to get the ball, while also seeing the quick reactions by the Jaguars.

Jumping back to the endzone view, the hole Tannehill sees in the defense is exactly what the Dolphins wanted, and exactly where Tannehill should go with the ball. Matthews is his first read, and he does not need to look to the right, because everything appears to be working. Tannehill does not see linebacker Telvin Smith moving back to the offense's left, which will eventually land him directing in Tannehill's throwing lane.

Which brings us to the biggest question about this play. As Tannehill is releasing the ball into what looks like a completely open middle of the field, we can see the entire left third of the field is empty. There are no Dolphins challenging this area. Why not? Could that have been designed for Clay to exploit, if he did not stay in to help block? Jacksonville only brought four pass rushers on the play, so it's not exactly like Clay was required to stay in to help with a blitz pickup. Thinking through the play design, if Clay were out in the left flat, the Jaguars would have had to respond, with safety Johnathan Cyprien, who is lined up almost like a linebacker, getting out into the flat faster than he did. That would open the middle of the field a little more, giving Tannehill more of a window.

Switching to the endzone view just as Tannehill releases, it does look like he has a touchdown. Matthews is just coming out of his break, and the middle of the field is open, save for the referees.

Smith, who had reacted to the run fake, then started moving back to the middle makes an incredibly athletic play, fully stretching as he jumps to get a hand on the ball.

The endzone angle shows just how good a play it was by Smith, who is tipping the ball up in the air. The ball is at the top of the circle as Smith leaps to make the play and save the touchdown.

Linebacker J.T. Thomas is then able to come down with the deflection and end Miami's scoring chance.

Luckily for Miami, the game was far enough out of reach of Jacksonville that the interception did not threaten them. The Jaguars would gain 11 yards after the turnover before having to punt the ball back to the Dolphins.

Tannehill appeared to do everything right on this play. With hindsight being 20/20, we can second guess why the Dolphins did not run the ball or at least have someone challenge the left flat. We can wonder what was supposed to happen, and we can wonder why Mike Wallace, Brian Hartline, and Lamar Miller were all on the sideline for the play. At the end of the day, it was the play that was called and it ended with an interception.

The other thing to remember is Smith really did make a great play, leaping back into the throwing lane and getting a hand on a ball that appeared to be a sure touchdown.

Hopefully, the Dolphins have taken a look at the play, figured out exactly why it did not work, and come up with a way to correct the result if they find themselves in a similar situation this week against the San Diego Chargers.