The BCS National Championship game is over, with FSU crowned the top college football team in the country. The undefeated Seminoles beat the Auburn Tigers 34-31.

Well that was not how the BCS National Championship Game was supposed to go.  In the final year of the BCS, everything seemed to say Florida State, the top ranked team in the country, would demolish an Auburn team that got some lucky bounces, and missed field goal returns, to barely make their way into the title game.  But, they wouldn't stand a chance, and FSU would have this game wrapped up by halftime. 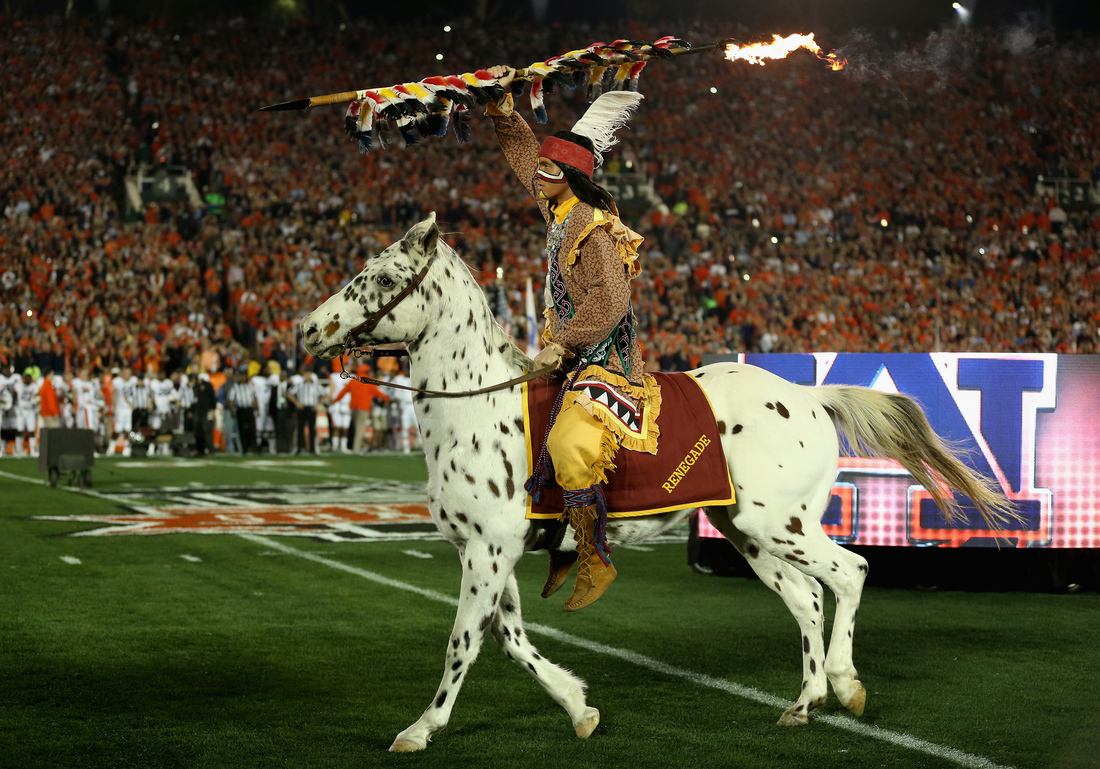 Except, no one seems to have told Auburn how this game was supposed to happen. 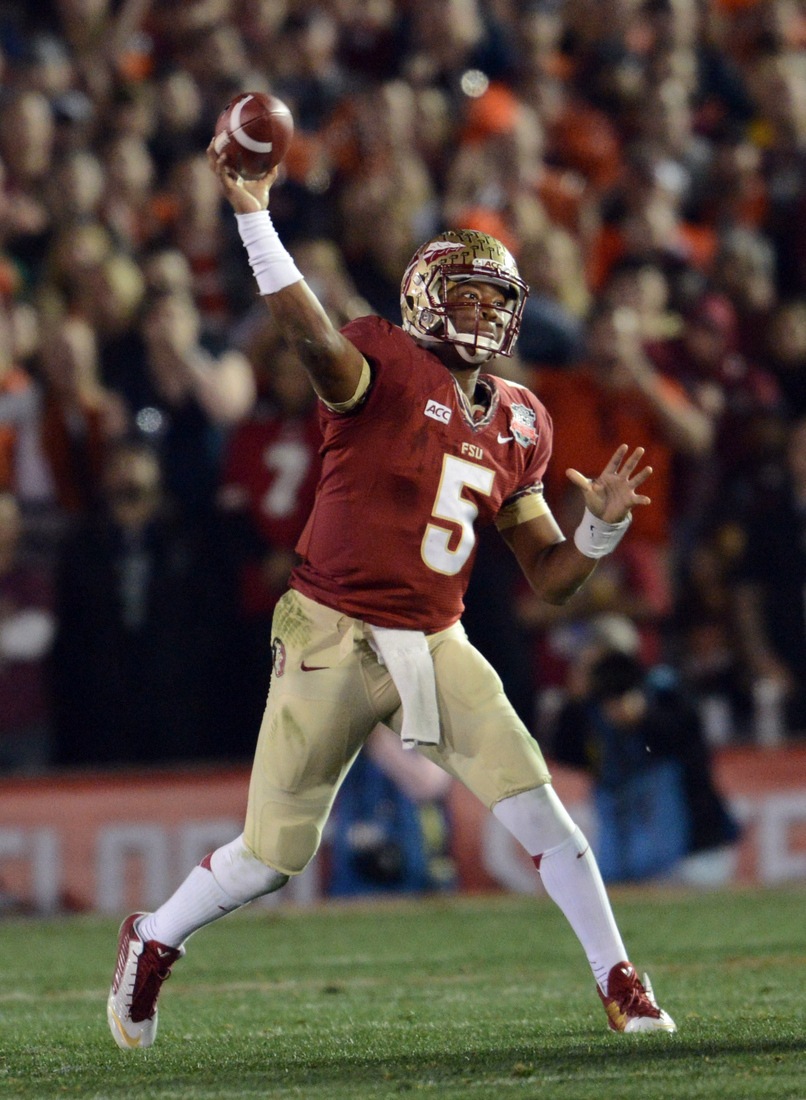 The first half was all the SEC team, jumping all over the Seminoles and Heisman Trophy winner Jameis Winston.  The redshirt freshman was held to 6-for-15 for 62 yards in the first half, along with seven carries for 28 yards.  Meanwhile, Auburn's Nick Marshall was 7-for-13 for 113 yards with two touchdowns, plus 10 carries for 26 yards, and another score.

The Seminoles actually struck first blood during the game, with Roberto Aguayo connecting on a 35-yard field goal attempt, giving FSU their only lead of the first 30 minutes at 3-0.  From there, Auburn seemed  to suddenly be able to do just about anything they wanted with the ball.  Marshall found Tre Mason for a 12 yard touchdown with just over three minutes remaining in the first quarter, then connected with Melvin Ray for 50 yards and another score at the beginning of the second quarter.

Marshall would then run in for the Tigers' third touchdown of the half, scoring from four-yards out.  FSU would finally put some more points on the scoreboard with a three-yard run from Devonta Freeman with just 1:28 remaining in the first half. 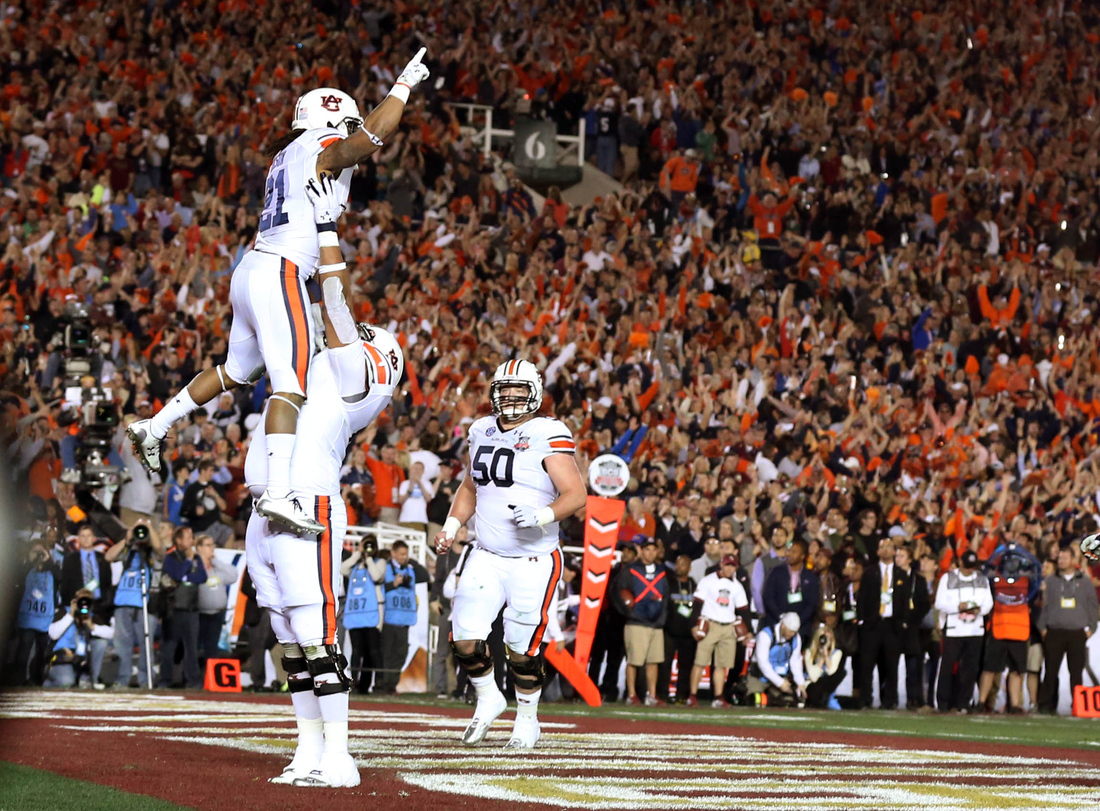 At the intermission, Auburn led 21-10, the first time the Seminoles had trailed at half time this season.  In the BCS era, the team that led at halftime was 15-0 coming into the game. 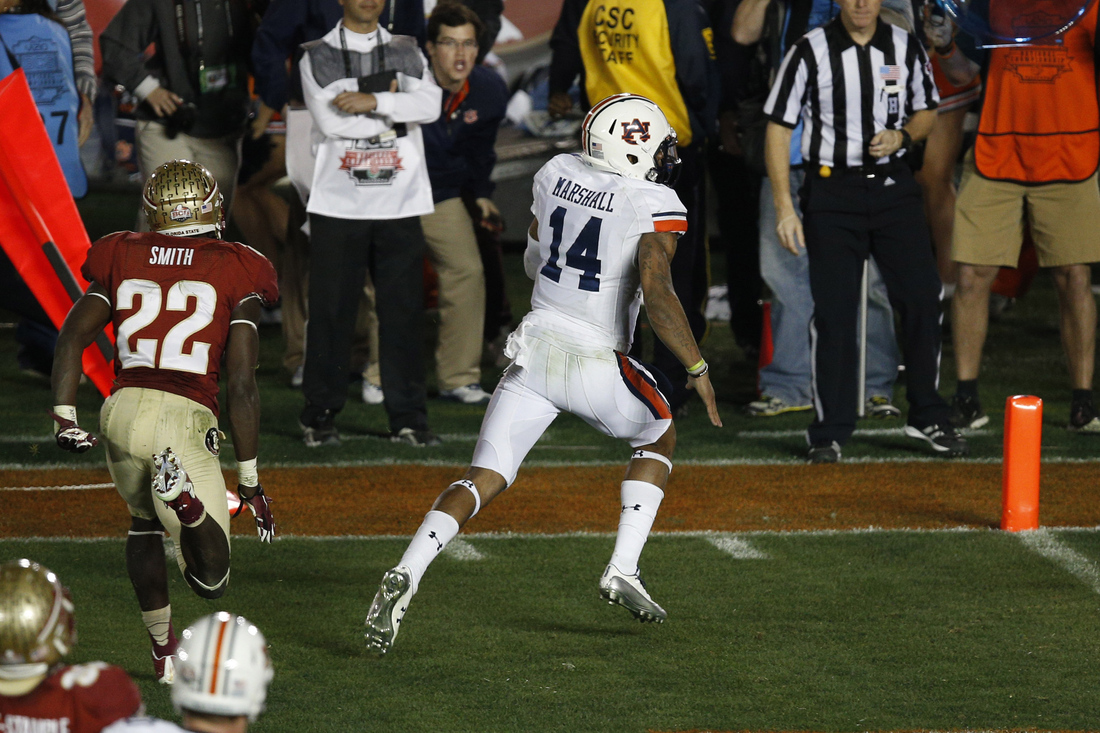 After the two teams traded punts to start the second half, Florida State finally found an offensive rhythm and started moving the ball down the field.  However, the drive would stall after 10 plays and 67 yards, leading to another FSU field goal.

The rest of the third quarter would go bye without another score, leading to a fourth quarter that started with Auburn holding on to a 21-13 lead.

After missing on a third down to start the quarter, FSU would punt the ball back to Auburn, who was looking to put away the game.  However, four plays into the drive, Marshall would thrown an interception to P.J. Williams, giving FSU great field position.  The Seminoles would capitalize on the turnover, driving down the field in five plays to score on an 11-yard pass from Winston to Chard Abram.  A 15-yard unsportsmanlike conduct penalty forced FSU to kick the extra point, rather than going for the tie with a two-point conversion, and the score became Auburn 21-20 with just under 11 minutes to play. 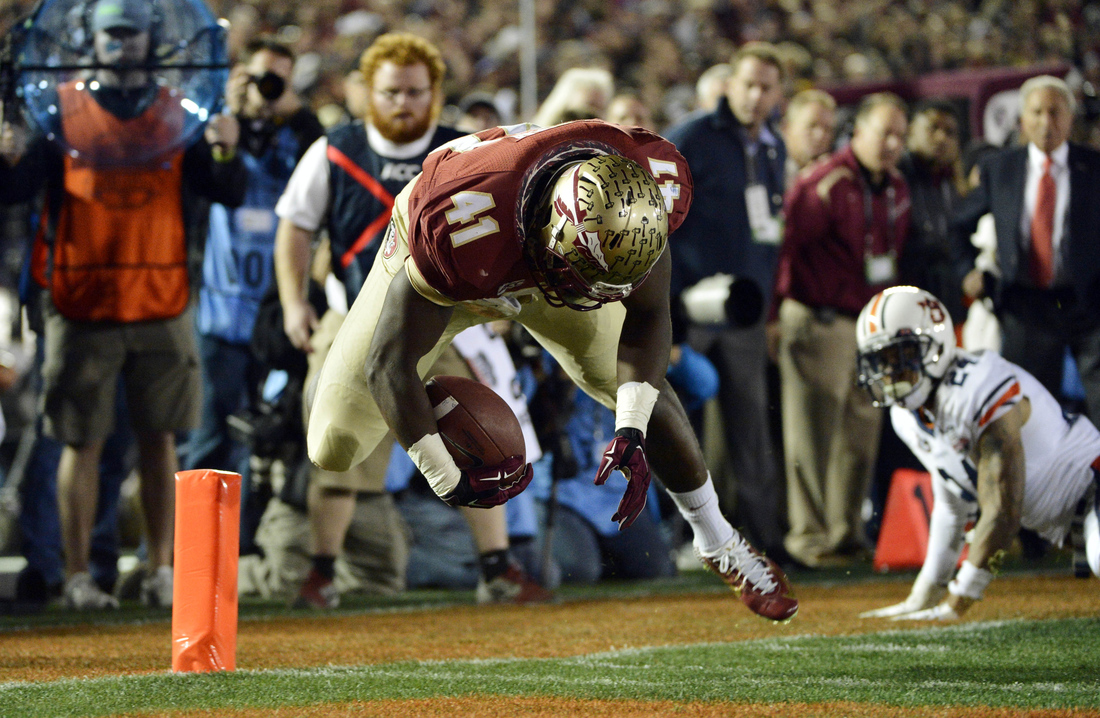 In response, Auburn came out and ran the ball straight down FSU's throat.  The Seminoles' defense wore down over the 12 plays the Tigers took to go 69 yards before kicking an answering field goal, stretching the lead back to four points. 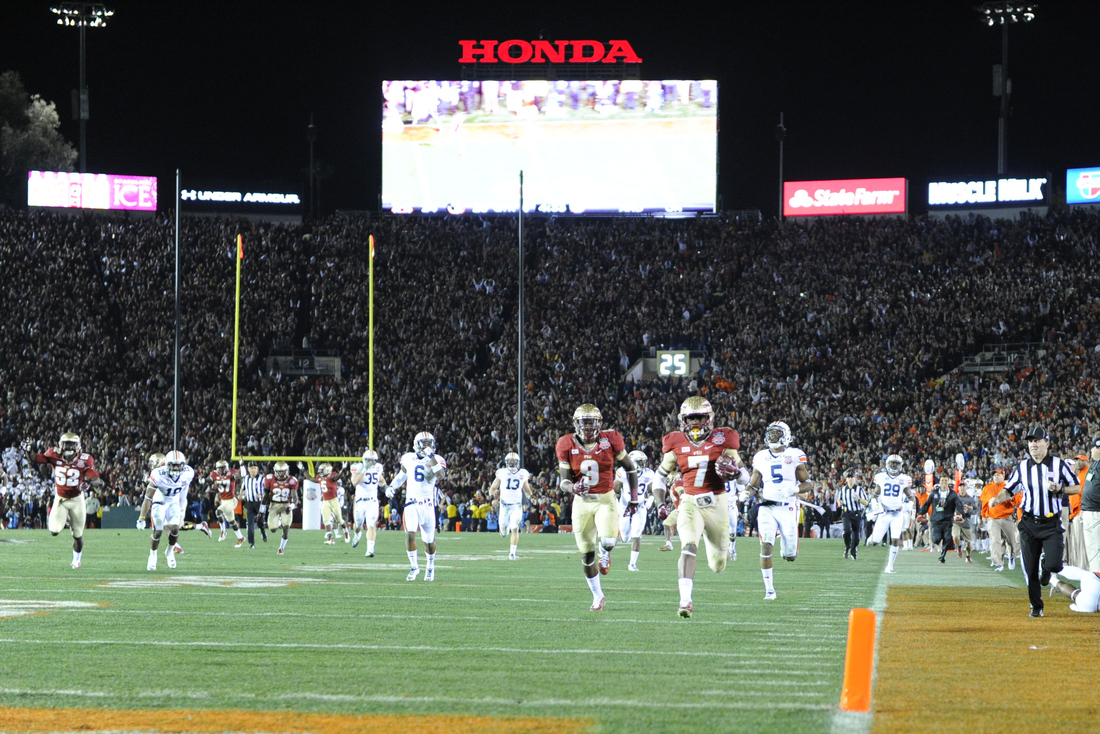 That four point lead would not last through the kickoff, however, as LeVonte Whitfield returned the ball 100 yards for the touchdown.  The freshman's score pushed the Seminoles into the lead for the first time since the 3-0 score in the first quarter, now with a three point lead at 27-24 with just 4:31 remaining in the game.

Of course, Auburn, who won games on tipped 73-yard passes and 108-yard field goal returns this year, were not done scoring.  An 8-play, 75-yard drive was capped with a 37-yard run from Tre Mason to recapture the lead for Auburn, with just 1:19 remaining.

The game still was not over, however, as Florida State again started moving the ball, using the top-ranked offense in the nation to give themselves a chance to win the game.  With 46 seconds remaining, the Seminoles found themselves within the redzone and looking to score thanks to a 49-yard catch and run from Rashad Greene on a short Winston pass.

Florida State would get the ball to the five yard line, looking at 3rd-and-3 with 21-seconds remaining, only to be called for a delay of game and back them up to the 10-yard line and a 3rd-and-8.  On the subsequent play, Winston looked to the endzone, where Auburn defender Chris Davis was called for defensive pass interference, putting the ball on the two-yard line and giving FSU a first down. 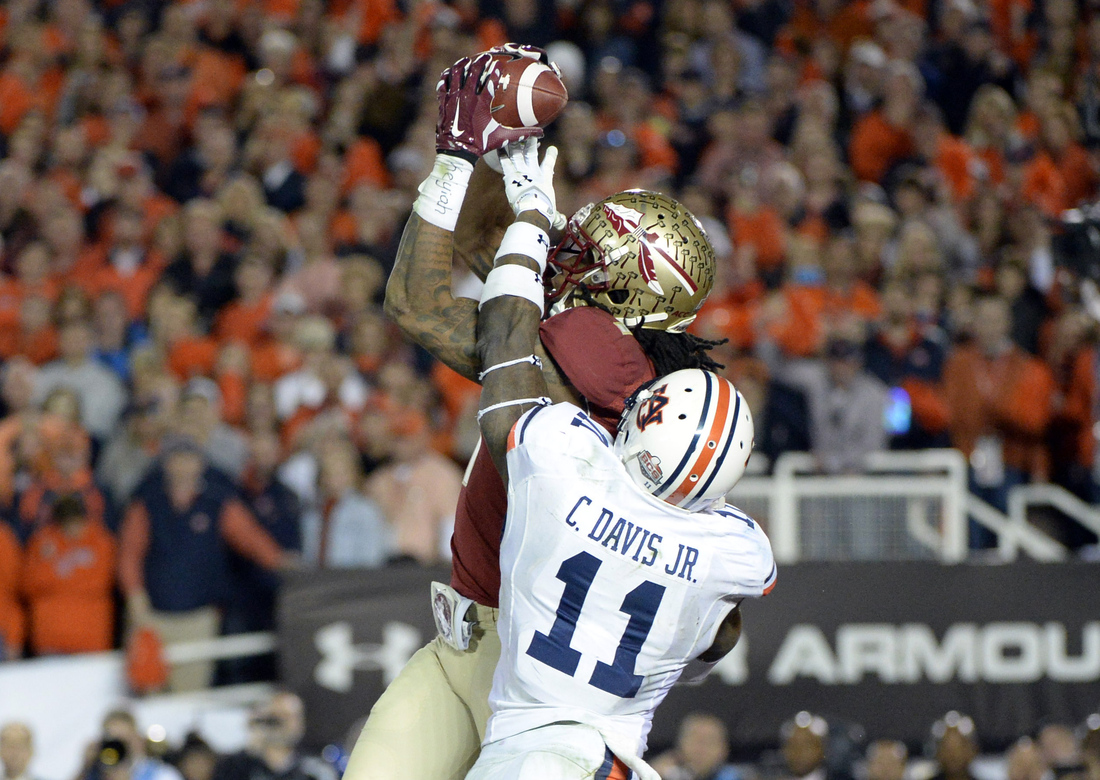 The Seminoles would play fake on the first down play, with Winston finding Kelvin Benjamin in the end zone for the touchdown, giving FSU a 34-31 lead with just 13-seconds remaining in the contest.  On the drive, Winston was 6-for-7 for 77 yards and the score. 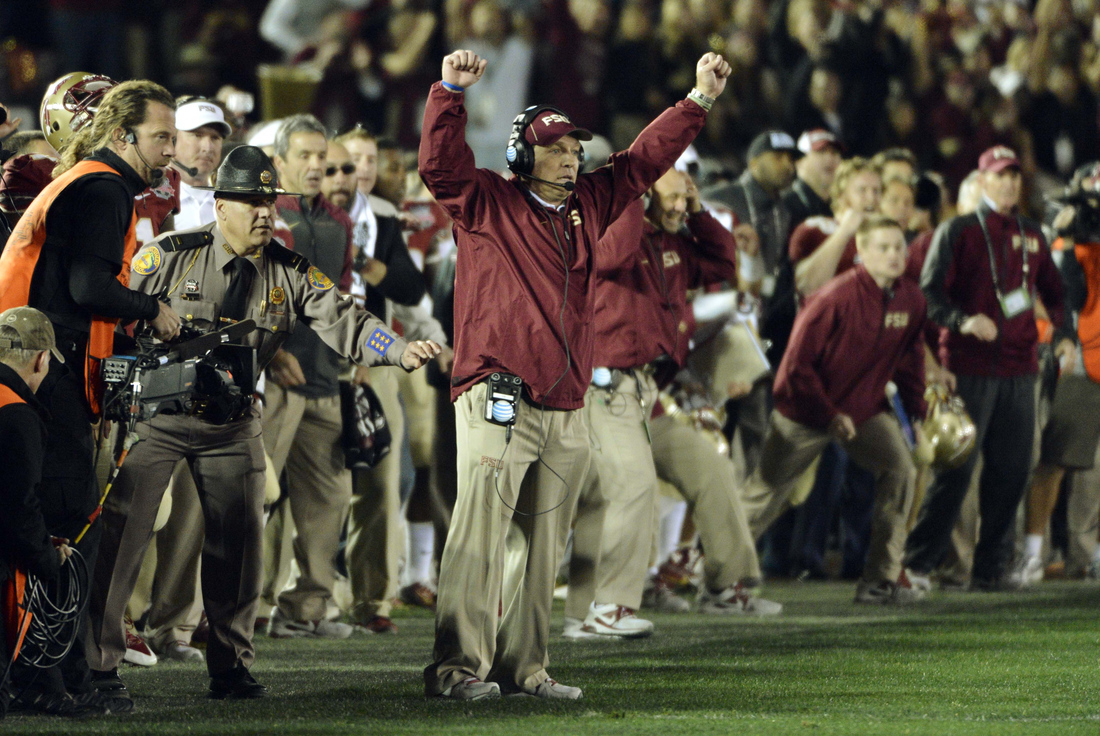 Auburn would not be able to answer in the final nine seconds after the kickoff, and Florida State would win the BCS National Championship, in a much tighter game than expected.  The win by FSU ends the SEC's seven year reign atop the BCS, and earns them the final crystal ball Coach's Trophy in the final year of the BCS.  Next season, college football fill have a playoff system for the first time in the upper-most division.

Winston ended the game 20-for-35 for 237 yards and two touchdowns.  He added 26 yards on 11 carries as well, while Devonta Freeman carried the ball another 11 times, gaining 73 yards and a score.  Receiver Rashad Greene led the game with nine receptions and 147 yards, while Benjamin had 54 yards on 4 receptions, with the touchdown.

Marshall racked up 231 yards and two touchdowns, with an interception, on 14-for-27 passing for the Auburn Tigers.  Tre Mason carried the ball 34 times for 195 yards with a score.

Winston was named the game's Offensive MVP.  P.J. Williams was selected as the Defensive MVP.