Contrary to the rumors swirling on the internet, Randy Starks did not announce the beginning of a year-long mission to taunt Joe Philbin by flipping the bird at the Dolphins bench in Cleveland

Share All sharing options for: Relax, Guys, Randy Starks was just kidding around

You know, I really wanted my first article after the Dolphins first win of the season to be football related. I wanted to discuss either the performance of our offensive line, or our receiving corps, or our defensive front-7, or our secondary.

Instead, I have to discuss a non-issue that some in the media are trying to turn into an issue. Randy Starks was shown briefly "flipping the bird" in the direction of the Dolphins bench during the game against the Browns. 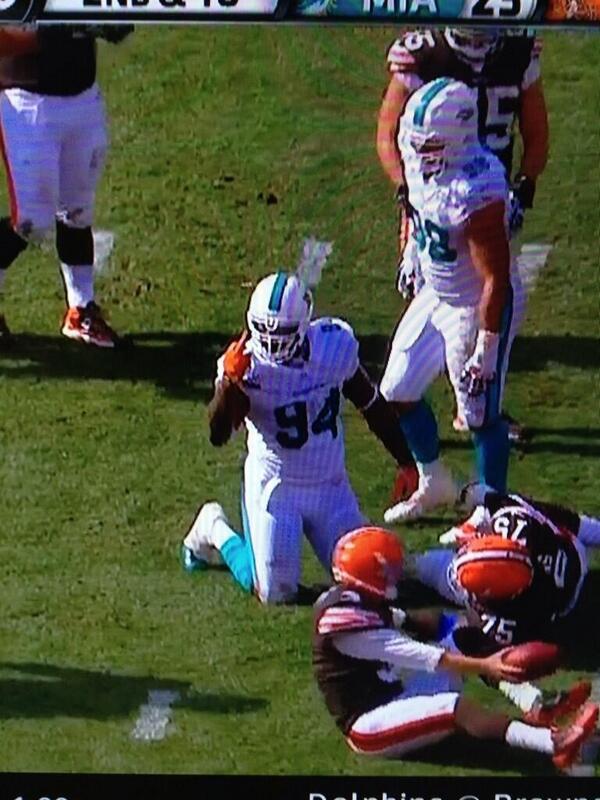 A couple of beat reporters on Twitter were asked about Randy Starks' gesture. Some began implying that it might have something to do with Starks not being happy about losing his starting job. Naturally, many fans who take beat reporters who haven't done so much as ASK the player for his side of the story seriously began interpreting the gesture as Starks flipping off Joe Philbin or other coaches.

However, isn't weird that if Starks flipped off our head coach, who is a strict disciplinarian, that Starks wasn't benched for the rest of the game? Or mentioned in the post-game press conference? Our head coach calls out guys for using profanity, so I'm pretty sure he'd take being flipped off personally.

So, Barry Jackson of the Miami Herald thought it was weird that Starks wasn't punished during the game for flipping off someone on the Dolphins bench, so he decided to do something crazy. He actually asked Starks for his side of the story. Jackson confirmed after talking to Starks' agent that Starks *did not* mean the gesture as a sign of disrespect to the coaches.

Starks had been getting teased on the bench by his teammates for losing the starting job, so after he came into the game and got a sack, he looked at the teammates who were teasing him and flipped them off jokingly.

It was NOT meant as a gesture of disrespect to either Jeff Ireland or the coaches, and I believe that explanation, because:

1. Starks has no history of being disrespectful to coaches. Indeed, after we lost our nose tackle in 2010 to a surprise retirement, Starks was willing to switch from 3-4 DE (where he had just finished having a breakout season) to 3-4 NT (where he'd be playing out of position and putting up worse stats) to help the team.

Thankfully, Soliai decided to become a beast in 2010 after injuries forced him into action at nose tackle, which allowed Starks to play 3-4 DE again, but the point is, Starks was willing to play out of position to help the team.

2. Starks is auditioning for likely the final big free agent contract of his career. Developing a reputation as a guy who gets into fights with coaches could literally cost him millions of dollars if it scares away teams who might want to bid on him in 2014. In other words, he has a huge incentive to not worsen his reputation, and I really doubt he'd intentionally risk hurting his financial future just to flip off Joe Philbin randomly at a game when he's had ample opportunity to do so since training camp began. What would be the point of doing it? If anything, it could lead to another demotion deeper on the bench.

3. Again - if Joe Philbin or any of our defensive coaches on the sideline, for example DL Coach Kacy Rodgers, were flipped off by a player, does anybody think they would just let it slide and let the guy keep playing?

I have no doubt that Starks isn't happy about losing his starting job, but let's not immediately assume the worst from him just because of that.

UPDATE: Joe Philbin has commented on the issue, making a joke.

<blockquote class="twitter-tweet"><p>Philbin joked Starks&#39; obscene gesture was probably intended toward him. Then said he has no reason to believe it was toward the coaches.</p>&mdash; Barry Jackson (@flasportsbuzz) <a href="https://twitter.com/flasportsbuzz/statuses/377128117417938944">September 9, 2013</a></blockquote>
<script async src="//platform.twitter.com/widgets.js" charset="utf-8"></script>