The first defense that the re-imagined Miami Dolphins offense will face this season is that of the Cleveland Browns, led by well-respected defensive mind Ray Horton. Here's some of what the Dolphins can expect to see from their Week 1 opponent on that side of the ball.

Share All sharing options for: Scouting the Cleveland Browns Defense

If you're unfamiliar, Ray Horton is probably one of the first names that will be mentioned when there's a head coaching vacancy after (or during) this season. For the last two years, he's been engineering one of the league's most aggressive and creative defensive schemes in Arizona.

At his current stepping stone, he'll be tasked with imparting that same philosophy to a Browns defense that's stocked with talent, especially in the front seven. Horton uses a number of different fronts and blitz packages to confuse the opposing quarterback, and tends to get more exotic with his calls in crucial situations.

Like all defenses, Horton's bases its packages on the opponent's personnel. The Dolphins' base set includes 11 personnel, or one tight end, one back and three receivers. The Browns will respond to this by taking out the nose tackle (usually) and playing a 2-4-5 front. 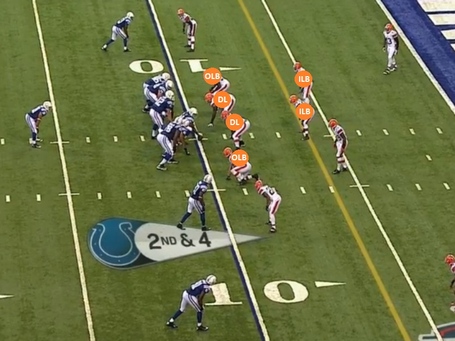 From this formation, Horton can and will show blitzes from just about any spot. Be it from the outside linebackers, inside linebackers, strong safety or any combination thereof, the brilliance of Horton's defenses comes from confusing the protections and effectively bringing pressure.

Dating back to his time with Arizona, Horton has been remarkably efficient with his blitzes. When he sends extra pass rushing, it usually affects the play. According to DraftBrowns.com's Brendan Leister, who charted and analyzed all of Arizona's 2012 defensive snaps, Horton's blitz calls (5 or more rushers) generated pressure 33.9 percent of the time. When he sent six rushers, that percentage jumped to 54.7.

It's a product of good design and knowing where the weakness in the protection will be. For the Dolphins, that weakness resides on the left edge, manned by left tackle Jonathon Martin, and an occasional susceptibility to A-gap, or up the middle, pressure. The Browns will attempt to exploit these areas, in addition to the normal confusion-inducing design of the blitz.

Free agent acquisition Paul Kruger and first round pick Barkevious Mingo, whose status for Sunday's game is uncertain after suffering a bruised lung in the preseason, make up an imposing edge rushing tandem that will test the Dolphins ability to adjust their protections.

Supposing that Miami manages to do a decent job of protecting quarterback Ryan Tannehill, he'll now have to contend with Cleveland's pass coverage. The perceived weakness of the Browns defense is its secondary personnel. Strong safety T.J. Ward and cornerback Joe Haden are fine players, but free safety Tashaun Gipson and cornerback Buster Skrine are young, inexperienced and need to prove they're reliable starters.

Horton, just like does with his blitz designs, tries to disguise his coverages. To show an example, here's a preseason play against the Indianapolis Colts.

On a 3rd-and-13, the Browns show blitz with Cover 3 behind it out of the 2-4-5. This is a common call by Horton in this situation. 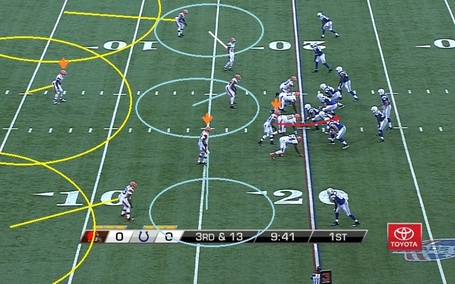 The Colts have a curl/flat route combination to the right side of the field, which is a pretty standard read against a Cover 3 look. As the ball is snapped, the strong safety and the linebacker showing blitz each drop back one level in coverage, and the Browns change into a Cover 4. 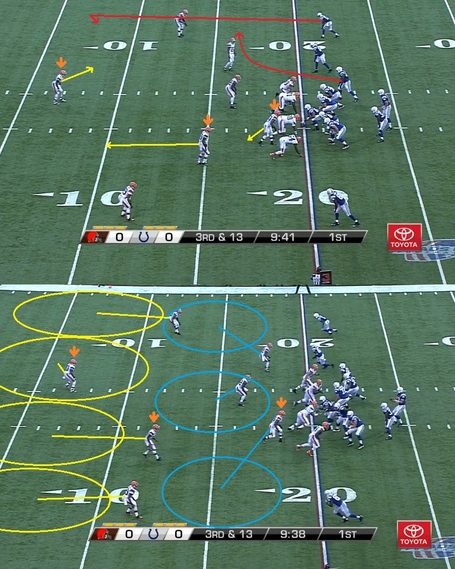 As a result, quarterback Andrew Luck's first two progressions are covered, and he simply scrambles for a minimal gain. What Luck saw pre-snap was not what he got post-snap, and the confusion led to a defensive stop.

This is an important part of the formula that Horton used to lead the 2012 Cardinals to a No.1 NFL ranking in opponent passer rating and interception percentage, and a No.3 ranking in redzone defense. Arizona was also top-5 in overall passing defense, first downs allowed, red-zone defense, and third down efficiency.

It's this aggressiveness and disguise that the Dolphins will face on Sunday, and their success will depend on execution, recognition and protection. Miami faced Arizona last year, and Tannehill as well as receiver Brian Hartline set career highs in both completions/catches and yards. Unfortunately, the Cardinals were able to force Tannehill into enough mistakes to ultimately win the game in overtime.