Miami Dolphins: Anatomy Of A Play

A weekly in-depth look at a key play in a Miami Dolphins game. This week: the Jimmy Wilson interception to seal the victory of the Atlanta Falcons.

Share All sharing options for: Miami Dolphins: Anatomy Of A Play

So far in this weekly series, I have focused on offensive plays and touchdowns. This week, I wanted to look at the defensive side of the ball. The highlight of the game for the offense wasn't a single play, but an entire drive. Ryan Tannehill stepped up and led a 13 play - 75 yard drive to get the go ahead touchdown late in the fourth quarter. NFL.com covers that drive very well in this video Much has been said and will continue to be said about that drive. However, Matt Ryan still had 38 seconds to get the ball into the end zone for the Falcons. The defense had to step up and seal the victory that Tannehill had set up for them. The Falcons' first play was an incompletion, setting up a 2nd and 10 from the 20. 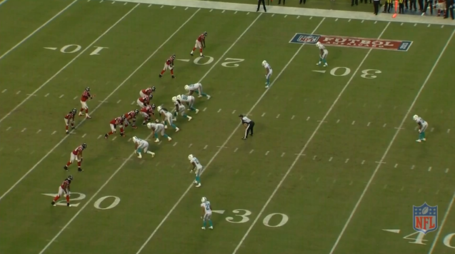 Atlanta is in a four receiver set, with Julio Jones lined up wide left, Roddy White lined up wide right, Harry Douglas in the slot left and Tony Gonzalez lined up in the slot right. The Dolphins are in a Cover-1 look (single high safety), with Clemons as the deep safety, man coverage with Reshad Jones defending Gonzalez, Wilson defending Douglas, Carroll defending Jones, and Grimes defending White. 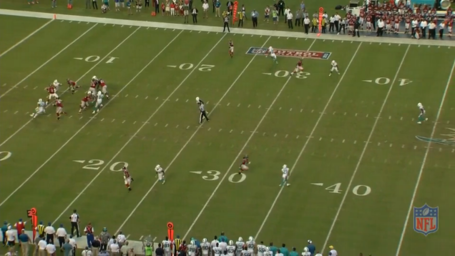 You can see from this shot that the outside corners are attempting to funnel the outside receivers into the middle of the field, into the area Clemons is patrolling. If the receivers turn outside, the CBs will have a chance to turn and break on the route. There is just one problem. 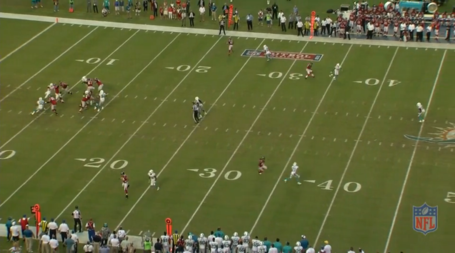 You can see the route combo here by the Falcons. The slot receivers run out routes into the flat and the outside receivers run deep outs. At the top of the screen, you can see Julio Jones breaking to the inside. The problem was that Carroll had to honor Jones' speed and has already turned his hips to run downfield. This gives Jones more than enough room to catch the pass, as you'll see in the next shot. 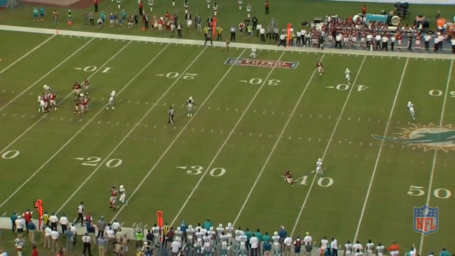 This is a timing route and Matt Ryan has already released the ball. With White hobbled with an ankle injury and facing the superior corner, Ryan decided to go to Jones and trust him to beat his man, which he did. Under normal circumstances, this pass would be completed at around the 36-38 yard line, with Jones going out of bounds to stop the clock, and Dolphins fans everywhere would be thinking, "Oh no... here it comes!" But this wasn't an ordinary circumstance. Normally this pass would be thrown "on a rope", or in other words, it must get there in a hurry. It cannot be thrown softly, lest the CB undercut the pass. This pass doesn't, and floats out there for Wilson to drop back and intercept. Here's the reason why. 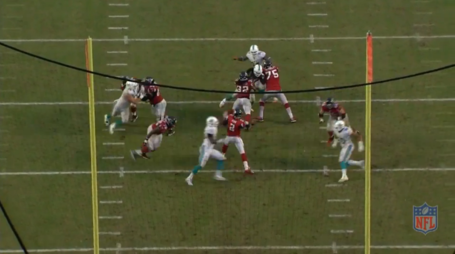 Who is that about to make a big play? Why that's rookie Dion Jordan about to destroy Matt Ryan. Jordan, who had played very sparingly in the first two games, was forced into more action this game due to Wake's injury. Jordan, using his excellent speed off the edge to beat the left tackle and generate a game saving pressure. I hand timed Jordan from the snap to this moment three separate times and came away with a result of 2.2 seconds each time. It was a critical part of this play that Jordan get there fast because Ryan is already in his throwing motion, about to release the ball. Olivier Vernon gets by the right tackle, but wouldn't have gotten there in time due to the route. You can see Jordan with his left hand already on Ryan and his right hand is presumably going for the wrap-up and/or swat the ball away. The contact forces Ryan to float a pass toward the sideline instead of him throwing the necessary fastball. 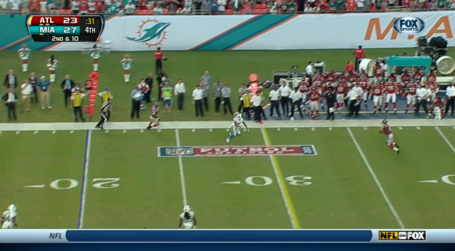 Jimmy Wilson saw the bad pass, dropped off his coverage of Douglas and followed the ball. You can see Jones start to turn back upfield. Normally, he'd be running straight to the sideline.

Here's the moment of truth: 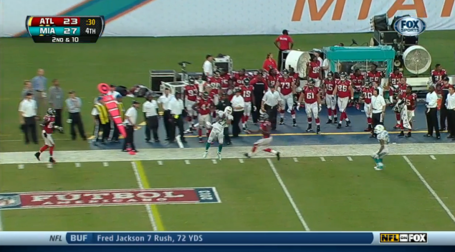 Due to the route combo, the depth of Jones' route, and the underthrow due to pressure, Wilson is in better position than Jones to catch the pass. All he needs to do is secure it and the Dolphins move to 3-0 for the first time since 2002.

And there you have it. The offense and Ryan Tannehill will get most, if not all, of the accolades for the victory due to that final drive. And they absolute deserve it. But the defense needed to make a play of their own, otherwise Tannehill's signature drive would be a footnote to the game.

Wild Zion Beaver has been suggesting most of this offseason that better pressure will help the coverage. This play is a prime example of that. This play never happens without Dion Jordan's pressure on Ryan. Without the hit from Jordan, this pass is completed to Jones for a 16-18 yard gain and the offense has 30 seconds and another opportunity for a win. It also shows that sometimes pressures can be just as effective, if not more effective than an actual sack. If Jordan gets a sack here, Ryan would still have had about 30 seconds and 2 more downs to try and make a play. The pressure however forced a bad throw, a turnover, and a victory formation for the Dolphins; no chance for the Falcons. It is the hope of the fans that the defense will continue to make huge plays like this one that result in more victories for the Dolphins.